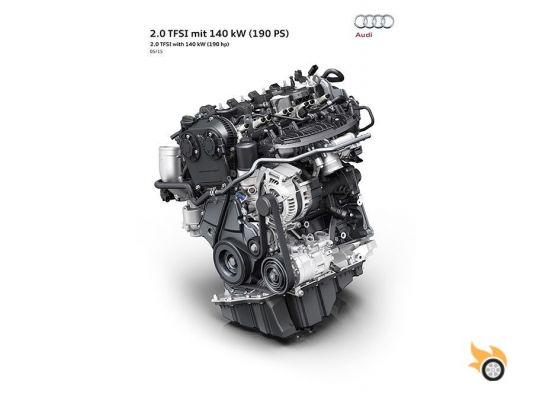 But there's a trick to it. Audi boasts that in an automotive world where downsizing seems to prevail, they have been able to stay with a displacement of two liters for 190 horsepower thanks to an "innovative combustion method". What is it about?

Well, as you may well know, and if not I'll explain quickly, Audi has long used in its engines a continuous control both in terms of time and the lift of the valves. What the Ingolstadt engineering team has done is to take advantage of this to modify the valve opening diagram and improve combustion efficiency.

How? Audi has tried to mimic the Miller cycle to some extent. It won't sound strange to you, as Audi isn't the first to use a Miller cycle, or an assimilated one, in a modern engine. Brands like Mazda (in the Xedos), or Toyota (Prius, although this one uses an Atkinson, extremely similar, but without pre-compression), already make use of this type of cycle instead of the Otto.

What the Miller cycle does is to shorten the intake stroke with respect to the other strokes of the four-stroke engine. The underlying concept behind this is something I'll reserve for a more in-depth explanation in a future technical article (well, a video, actually), but I'll sum it up by saying that when the car "sucks in" the air, it's cold, and therefore has a higher density, so it takes up less space. When combustion occurs, the air and burnt fuel residues are hotter, and therefore can occupy more space at the same pressure, so they can be "stretched" more and get more out of them if you make a "longer run". Let's summarize and simplify (in a barbaric way, since it's not exactly like that): What you do is "breathe in half a litre of cold air, and expel three quarters of a litre of hot air". The idea is that the energy of the expelled air is the same as the energy of the "ingested" air. If the energy is the same in the air sucked in as in the air expelled, the remaining energy created by combustion will have been used to create rotational movement in the engine, and therefore to push the wheels.


Audi plays with a propellant with distribution and variable valve lift to offer a Miller cycle at low and medium loads, and work as a normal cross-valve engine at high revs.

In conventional engines usually do not take full advantage of the expansion stroke, so the exhaust gases are released with more energy than ideal, and therefore, part of that energy efficiency is lost by not being able to have an expansion stroke longer than the intake.

The Miller cycle fixes that, shortening the intake stroke with respect to the expansion stroke. But it has a vital drawback. As we approach the fastest engine speed, things happen so fast that Miller cycle engines start to underperform. It turns out that in those cases, since you have to move a lot of air in a very short time, it's more effective to play with less efficiency per engine turn, and move at full throttle mixture and exhaust gases.

What Audi has done here is to play with its system of lift and variable valve timing. Thus, at medium loads and medium phases in terms of crankshaft speed, the engine works as a Miller cycle, cutting the intake stroke, but when the engine starts to turn very fast, it starts to work as a conventional engine, with more valve crossing and with a longer intake stroke (the intake valves are no longer closed before reaching the bottom dead center of the crankshaft).

Add to this the fact of having a dual injection system (direct and indirect) and a high compression ratio, and the new 2.0 TFSI Audi achieves not only those 190 horses, but a delivery of progressive torque from very low (320 Nm between 1,450 rpm and 4,400 rpm), while its consumption does not exceed five liters per 100 kilometers of homologated European average.


A technologically interesting engine, which will have to be seen how it responds in the real world to the two-liter 320i BMW, which is its direct rival, but homologates an average consumption of half a liter more per 100 kilometers.

Audi wins the tightest 24 Hours of the Nürburgring in history ❯