Let's take a look at some advertisements in the written press. In Spain it had the slogan "Yugo, the surprise", in which it also highlighted its strong points: assistance throughout Spain and compatible technology, and, above all, emphasizing its very low price. In the United States it sold relatively well with two very direct slogans, one of them was "Everyone needs a Yugo sometime", in which the advertising highlighted above all the price of 3,990 dollars, and another alluding to the people's car for everyone: "Introducing the same old idea" and appearing in front of a Ford T and a Volkswagen Beetle. In the UK it was: "The best in its class". 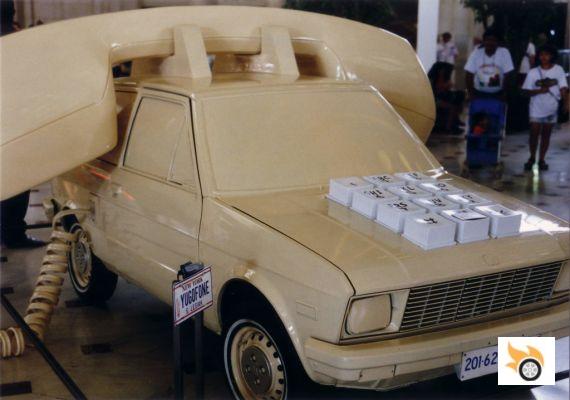 The Yugo as a work of art

Art Yugo, that was the title of one of the most bizarre and curious exhibitions about the world of automobiles. In 1995 in Washington D.C. an exhibition was held by an art class from the prestigious School of Visual Arts in New York. The objective was to take the Yugo and transform it into everyday things and places, such as a piano, a foosball table, a toaster, a cinema, etc. proving once again that this car was different from the rest. And that although it was always a way to ridicule and belittle the car. It was present and well known in the United States. You can scroll through the slideshow to see more examples.

A screen star in supporting roles

Despite not being as iconic as the Ford Mustang, it has appeared in more than a few Hollywood films and TV series.

Although it seems incredible it has not been spared from the preparations and there are hundreds of pages, photos and videos about tuning the Yugo, most of them would fall into the category of shabby and bad taste. I guess its low price and quality lent itself to it, but some preparations are not all bad, even if only as an experiment. Just as an example a preparation with two V8 engines and all-wheel drive, very American.


The feathers did a lot of damage

In the press, the Yugo has been the star of some articles such as one in the New York Times in 1985, with the following statement: "The worst car in history". Also in Time magazine, in 2007, appeared in the list of "The 50 worst cars of all time", in which we find the Yugo GV of 1985. In addition, there is a book by Jason Vuic titled "The Yugo: Rise and Fall of the Worst Car Ever", where he explains a bit of the history of this peculiar car for its passage through the United States. 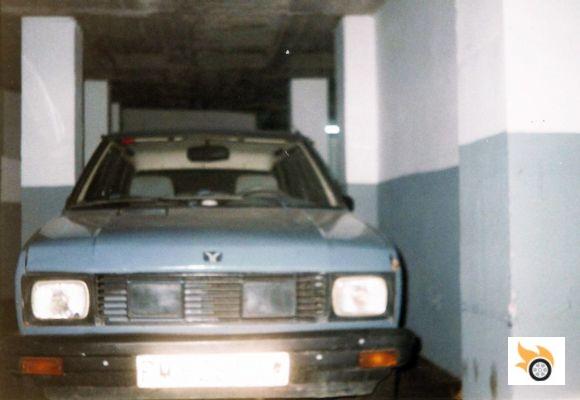 Remembering my own Yugo...

My experience with Yugo comes from my teenage years. I was nine years old when my parents, more specifically my mother, needed a new car. She came from a white Seat 127 and it had broken down, it was time to move to modernity. It was imperative a very small car, the garage space was - and is - ridiculously narrow, and if possible it had to be as economical as possible. As fate would have it, some friends of my parents worked in one of the few dealerships in Spain where the Yugo was sold. One thing led to another and for about 800,000 pesetas the car came home.

It was small, cheap and up to here I can read its virtues. Its color was pale blue, a very peculiar color, not very common. It was square and ugly, it had an air of the 127 from which we came, but it wasn't far from a first generation Golf either (however aberrant the comparison may seem). Our model was the Yugo 45A, with a 903 cc petrol engine and 45 horsepower, which didn't give much, it seemed much less. The zero to hundred made them in a minute and a half; okay, it's not true, but it gave that feeling. It was noisy and consumed a lot for what it was.


The interior, all bad plastic that creaked from the first days. And I think I remember it didn't have a glove box, just a small tray to leave some small object. All the papers of the car were in the back pocket of the passenger seat. The lights were a button with several positions to the left of the steering wheel on the dashboard. It didn't have a lap counter, something very normal in those days, and the gear shift lever was elongated, infinite and shaky. That's OK, for four gears it had....

I still remember the silver foil wrapped Nocilla sandwiches I ate in the back seats on the way home from school.

My brother drove it for a while as his first car too, and he always says that one day a friend told him that he had seen an ugly and very strange car in the coastal town where we lived. He replied that it was our mother's new car.

And the day came when, after passing through the hands of my mother and my older brother, it was my turn to try it out. I had just got my license in September 1998 and I was able to experience for myself the "qualities" of this strange car. It has always been said that it is better to learn with a bad car, so I learned to drive very well. We shared it between two of us, although most of the time I drove it, even though I didn't drive it at all. No matter, in theory with the "L" I couldn't go over 80 km/h as a rookie.


It swung like hell. Many times people would stare at it, wondering what car they were looking at, not because it was spectacular or beautiful, but rather out of curiosity. Despite all its flaws, it was the first car I drove after the Citroën AX diesel from driving school. And I used it to get around with my friends: to the beach, to the cinema, shopping, or anywhere I wanted to go. When we didn't go in my friends' Clio RT or R5, we went in the Yugo.

Once I finished high school, in the afternoon shift as a computer science student, among my classmates there was a lot of fun with my car. My classmates had a white Ford Escort, a grey SEAT Ibiza... and a brand new black Ford Fiesta XR2 Mk.1. Although all those cars were better than mine, the Yugo was special. I distinctly remember arriving at school one day at three o'clock in the afternoon and as soon as I got in a classmate told me that he had seen on TV how they were dropping bombs on my car factory.

NATO forces bombed the Zastava factory in 1999 during the Balkan conflict, although in theory it was collateral damage.

It was widely criticized and mourned by the Serbian people. My first thought was: "I've run out of spare parts". But that was never a problem; old SEAT and Fiat parts were good for almost any part of the car. Our lifelong mechanic always told us that we had the rarest car in the garage. But, despite all the cars our classmates had, the one we all remember most was the Yugo.

One of the anecdotes that happened to me with this car had to do with its radio. Of course the car came without a radio and in its place there was a little cover so that there was no hole in sight. We bought a radio in the thousands of places where they used to sell them, one of those removable radios, that people parked the car and took it with them as if it was the most normal thing in the world: walking down the street with a kind of briefcase or being in a bar with the thing on his back. It is one of those details that we have rightly erased from our minds.

After a while of having it, one day when I was looking for a new station I discovered something strange. There was a frequency on the radio that was coupled for a strange reason with the car. When I beeped with that station, you could only hear noise, it was coupled and you could hear it almost more through the speakers than through the horn itself. One day I was accompanied by a friend, we were going with the car and we stopped first at a traffic light, to our right another car stopped. As usual, he saw the Yugo and laughed and immediately gave a blow of gas to his car as if in mockery. 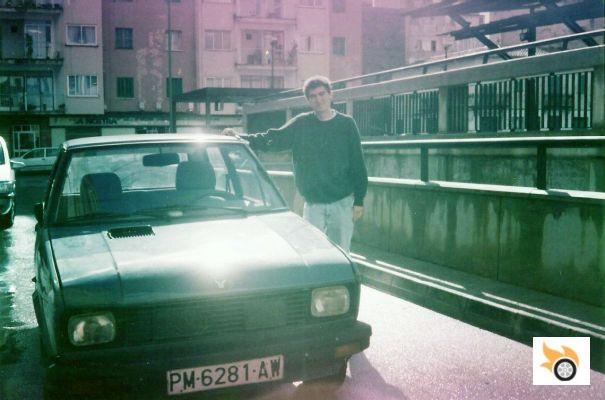 Then I told my friend to roll his window all the way down, manually of course. I tuned in the "magic" station and turned the radio up almost to maximum volume, and did the same as he did, slammed on the gas. The engine, as well as the horn, was coupled to the radio. From that little Yugoslavian car came out a roar like a V8 in rutting season, which the other driver didn't expect. His face was a poem. The traffic light turned green and I advanced slowly between our laughter. I think that man is still wondering what engine was in that ugly car. Maybe I was the forerunner of that pitiful idea that cars sound through the speakers, something that some sports cars do nowadays.

One of its usual ills was how hot it got. It consumed practically the same amount of petrol as water. I remember how every day when I came back from work on the motorway the temperature needle was a little over half way up. At the second traffic light, after entering the city, the temperature would shoot up. Coming down the twisting parking lot of my house the needle was above the maximum level and there were some guttural noises coming out of the hood. The coolant was already boiling.

And as in life, everything comes to an end. After nearly a decade the day came when we had to retire that car. It went straight to the junkyard with a kind of sorrow never accepted until many years later. And I was left with the desire to keep it somewhere to do crazy things with it in the future, but as almost always, one does not have a field or garage to spare to keep a relic. It was replaced by a Daewoo Matiz, which was no wonder, but compared to the Yugo it looked like we had bought a Mercedes S-Class. 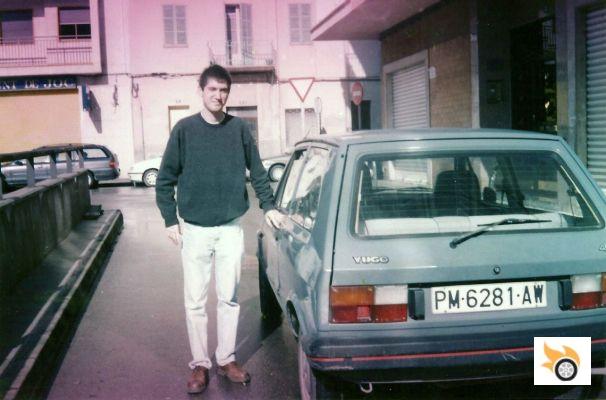 I came to the following conclusion: as I possibly drove the worst car ever - as my first car - from then on everything had to get better in the cars I was going to drive in the future. Thank you, I still remember that wonderful memory of the disaster that was "my" Yugo.

add a comment of Zastava Yugo, the worst best car ever?