Are four cylinders insufficient or unworthy for Chevrolet Camaro or Ford Mustang?

Both Camaro and Mustang are offered with turbocharged four-cylinder, naturally aspirated V6 and naturally aspirated V8, the latter with fat, old-school displacements. Inevitably we are reminded of the pitiful pony car generations of the late 70s and early 80s, affected by a very low calorie diet due to the oil crisis of 1973 and the Iranian revolution of 1979. These two events ended the American dream of cheap, endless gasoline for a while.

Things have changed a bit since the Mustang 4-pot (a derogatory way of saying four-cylinder) and the "Iron Duke" Camaro, which, yes, drank less gas than their big brothers, but performance-wise they were average cars. The fat engines were mercilessly capped to reduce their fuel consumption and emissions, and for a while, it was not a national embarrassment to bring out engines of almost 6 liters of displacement with power of less than 200 hp.

Mustangs come with the 2.3 EcoBoost under the arm, with 310 hp, and the new Camaro with the 2.0 Turbo and 280 hp. These engines don't have much to do with the dross that Detroit (and satellites) made in those troubled years. Yes, indeed, they are powerful. Yes, they have a lot of balls (torque, maximum torque or whatever you want to call it). Yes, they have more reasonable fuel consumption.

Ford still offers a 3.7 V6 for the Mustang as the entry-level engine, and for lightly equipped versions, with about the same power as the EcoBoost. If you want a decently equipped Mustang - in North America - you have to go for the EcoBoost. In Europe that car is only going to be seen under strict order or importers. Ford wants to sell them the EcoBoost and get us used to the fact that this is and will be the way things are. It is a vision of realism.


For its part, the Camaro engine policy will be different, and there will be more freedom of choice with any of the engines, if the customer wants a well-equipped Camaro will not be forced to choose engine. Indeed, in the 80's a 4-pot engine was synonymous with low fuel consumption, but low performance. Today that's not the case, and four-cylinder engines can exceed 400 hp even in production cars. Did someone say Mitsubishi Lancer EVO in its latest editions? We have a winner!

I won't be the one to take issue with the realities of the numbers. A 2.0-2.5 L4 can beat a V6 of almost twice the displacement in performance, and have a much lower consumption floor: in undemanding conditions, city and cruising four cylinders are less thirsty. Another thing will be to subject them to greater efforts, but more than two liters usually work well, it is not an excessively tight engine.

So what the hell is the problem with four cylinders?

Well, we enter the wonderful world of nuance and subjectivity. With less displacement we have less air/fuel we can burn, therefore less power. Thanks to the use of superchargers - in this case turbos - we can make up for the lack of natural aspiration of the engine with brute force, taking advantage of the exhaust gases, and with an intercooler - heat exchanger - we reduce the temperature of the compressed intake air, facilitating a more complete combustion and therefore, more horsepower.

Whoever puts it back as "cavallos" will be saddled with a driveshaft.


Now we come to a technical question: the characteristics of the compressor. If we have a very large turbo, it will have more inertia, so it will take longer, however little it is, to blow at full throttle. If we have a very small turbo, less inertia, less response time, but less blowing. You have to find the balance between both variables. The engines I'm talking about in these two cars are single turbo.

That means that, until the supercharger delivers its maximum power, it will have a lag in its response. In almost 11 years I've tested a few General Motors 2.0 Turbo's, and generally, they have little low end and get very explosive on acceleration. They are engines more suitable for compacts and sedans, where brute force is not as important as the overall balance of performance.

I can't talk about the Ford engine because I haven't touched it, but with those 300 cc of additional displacement, the Mustang should have better low response, something I'll check. As you all know, naturally aspirated engines are quicker to deliver power, even if it's... less. Without a turbo, the classic ways to make more power with naturally aspirated engines are either to allow them to rev higher (power = torque x RPM) or to increase displacement. Logical, isn't it?

The turbo delays can be compensated with double inlet intake ducts (in BMW, for example, it's called TwinPower Turbo), electronic management of the wastegate, ALS/bang-bang (not in production cars)... or with two turbos, which is not the case. Let's move on to another issue, the sound. As in a turbo engine the exhaust air has to pass through the turbine, the sound is not so clean. The fact that the compressor sounds great under load, and then makes a big noise through an atmospheric wastegate can make up for it. Oh, dammit, that's not profiled in production cars, the valves are recirculated.


To the aforementioned problems, we have to add the problem of refinement. A V6 or a V8 are more balanced than any L4, ask Guillermo Alfonsín and he will explain it better: vibrations of the first order, of the second order... That's the same reason why I get so annoyed talking about the three-cylinders: they are even more unbalanced, and whoever doesn't notice it, doesn't know much about mechanics. But who else cares?

Whoever has driven an American car, regardless of the year and power, with eight cylinders, understands what American power is all about. European or Asian V8s just don't go the same way. In the movies the most evil bad guys use V8s. Mad Max is an ode to V8 engines. Hell, even V8 diesels sound good. Yes, they have the problem of being heavy and needing a petrol station behind them... but what kind of car are we talking about?

Putting a V8 in a compact is a product of extreme tuning, the madness of a few performance freaks or a desire to get out of the ordinary, but it's completely absurd thinking about a mass production car. An ode to waste, to nonsense, to justify wars to take oil from people with any excuse. No friends, for that kind of car, a V8 is a complete gilidiotez.

But we are talking about very different concepts. We are talking about pony cars, cars that represent a decadent style of car, that resists to the new times, like the one that carries a Nokia phone with polytones. They don't pretend to be ecological, their proudest owners wear "FUCK THE FUEL ECONOMY" stickers, and believe that all of us who drive hybrids are small (the displacement) and gay.

Let's look at a more multi-purpose car, like an Opel Astra OPC or Ford Focus RS (there's even a family car!). They have power, yes, but they are more versatile, have more usable trunks, lower maintenance costs, can be installed more comfortably with ISOFIX seats and with good electronics can be driven by our grandmothers. They represent a different style of car.

In the argument that General Motors passes to its salesmen and internal staff it is said that although the Camaro still has a bad rear visibility, it is that its customers do not look for that and want it to have a more badass design, even if they sacrifice visibility. That is to say, the typical customer of these cars is willing to accept sacrifices in terms of functionality or utility, as long as they don't take away power. That's why they would deserve eternal fire if they were to be produced in five-door, diesel, with 120 hp and SUV looks. That's for other people.

Is it a wise move to sell these cars with four cylinders? From a marketing point of view it is, they meet several objectives from a rational and irrational point of view. They will sell more. Europeans who look at the consumption or the sablazo that they put in taxes on displacement or carbon dioxide will see them with better eyes. The ships will bring more units from America. And they will earn more money. Normal and understandable, that's what cars are made for, to make money. 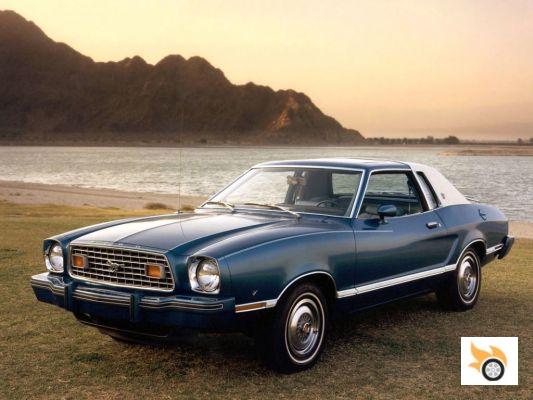 The four cylinders can be more correct than taking out V6 or V8 versions with LPG, and even the most Taliban of petrolheads will have to admit that if they don't see the pipes, or the rear tank, or catch them refueling, they wouldn't know what fuel they are burning. It doesn't matter that we're talking about a fuel with a higher octane rating than racing gas (103-104 RON), it doesn't matter that we're talking about a lower intake temperature (it goes to almost 0 degrees), it doesn't matter that it reduces emissions much better than any fucking downsizing or that it costs half as much at the pump. Some people are very narrow minded.

They want to sell us those cars with four cylinders? Go ahead, they'll do well. The true enthusiast, if his wallet allows it, will still prefer a naturally aspirated V8 (or brutalized with a supercharger, if you want to dream) to an inline four that's tighter than the nuts on a submarine. Yes, the Golf R will have a 400 hp version and will be competitive in some circumstances with these engines...

Oh, I forgot. With the same construction technique, a V6 lasts longer than an L4, and a V8 longer than a V6. The less tight an engine is, the more it stands the test of time. Examples abound and are beyond the scope of this brick. In 15-20-25 years we will see which Camaro and Mustang models are more sought after, the ones with efficient engines (power/consumption) or the V8s that sound like new with 300,000 kilometers on them (electronic injection stuff).

V engines have become a luxury, a privilege, and by selling only with V6/V8 engines, these cars give up a type of public that is torn between a cycled compact or a pony car. They are "signature" cars, like the Subaru WRX STI or the Porsche Boxster. They are special. But they're on their way to becoming rational alternatives to more rational cars. Progress they call it. 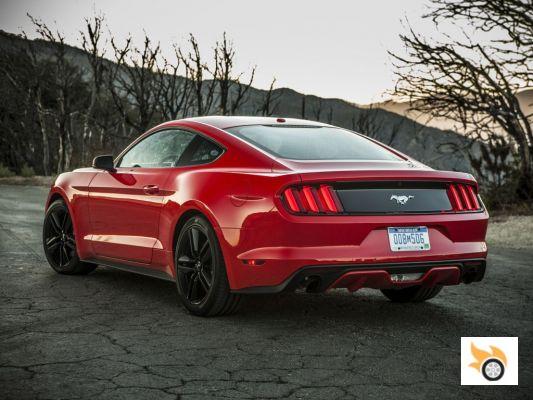 If I can ever afford a Camaro or Mustang, rest assured it will be an eight-cylinder. I'll convert it to LPG, you can stone me with used pistons if you want, but I'm going to do it. I'll enjoy the monetary consumption worthy of a V6 Diesel while doing the "FUCK THE FUEL ECONOMY", with the punchiness of a fat petrol, and I won't be worried about when the turbo is going to crack, I'll have a better sound, a longer lasting engine, and the American character with lower polluting emissions than a standard dinosaur juice four-cylinder. On the street no one will know the difference without a gas probe. I'll stop for more gas, and as I fill up, I'll leer at that muscular ass.

I'll leave the four cylinders for whoever wants them, I bought a Prius for a reason. Good afternoon.

add a comment of Are four cylinders insufficient or unworthy for Chevrolet Camaro or Ford Mustang?