But Yamaha's links with the four-wheel world go back a long way, even if it hasn't had products with its own logo. For starters, Yamaha is a shareholder in Toyota, and has collaborated in the development of high-revving naturally aspirated engines for the Japanese brand on numerous occasions.

Blocks like the 2000GT or the Hachiroku would not have been possible without Yamaha designing them. The Lexus LFA engine also received a good dose of R&D from the motorcycle firm, and even Toyota's Formula 1 program received advice from them. 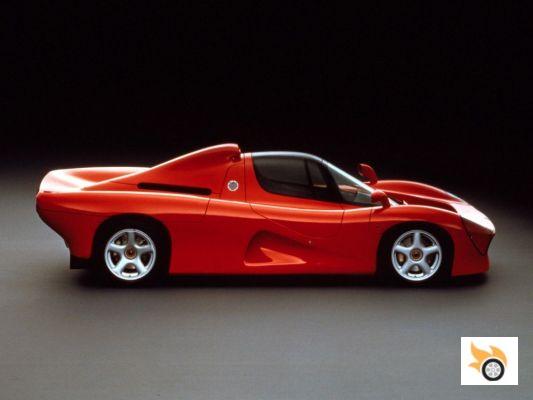 Yamaha has been a partner in automotive engine development for decades

And it wasn't all Toyota. Yamaha also sold 'customer' engines to Formula 1, in a sort of response to what Honda was achieving in the championship. In fact, it was from that bank of F1 knowledge that Toyota drew from in its entry into the category.

Yamaha also sold the engine design of the XC90, Volvo's SUV, whose V8, vital for sales in the United States, was conceived by these exceptional Japanese, famous in the world of two wheels for their know-how in chassis (who does not know the word Deltabox among bikers), and also for their innovative designs in the draft of the crankshafts of their four-cylinder engines.

Well, let's travel back in time on this cold Saturday. In the late eighties Honda dominated the F1 World Championship with its engines. Between 1986 and 1991 the Japanese company would win all the constructor's titles along with several other teams.

Yamaha was envious. It wanted to give light to its name and demonstrate its know-how. So, it devised a complete program as a Formula 1 engine manufacturer. The idea was to create engines in the UK, and to capitalise on this investment in the Grand Circus, to also make a supercar derived entirely from F1 technology. 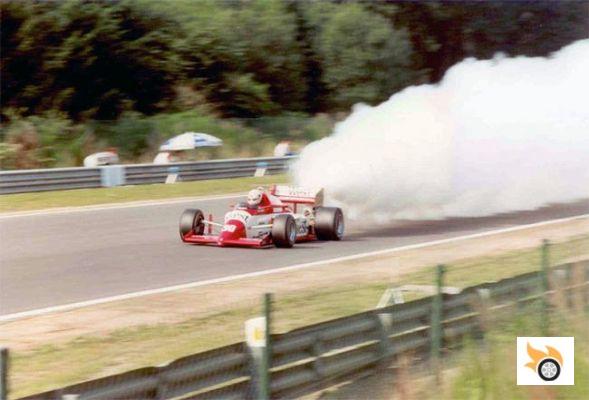 Yamaha's first season in F1 was in 1989 with the OX88 engine, with a very disappointing result: only twice did Zakspeed cars with this engine manage to qualify. After a 1990 disappearance, in 1991 they resumed F1 competition, and took the opportunity to relaunch their supercar project using the new OX99 Formula 1 engine then fitted by Brabham.

Until then, the tentative start of the project had been outsourced to a German firm, who had proposed a car similar to a Group C, with a riveted aluminium chassis, but the idea did not appeal to Yamaha, who wanted to see more F1 technology in the machine.

So the contractor was changed, and the Milton Keynes firm IAD was hired. IAD, after several talks with the Yamaha people, managed to conceptualize exactly what they wanted: A Formula 1 bodybuilt car. In any case, despite what the official story tells, IAD was not the only one involved. The striking resemblance between the Mazda 717C and the OX-99 is no coincidence.

Yamaha, having outsourced to two European firms, also decided to turn to Mooncraft, the race car manufacturer that had built the Le Mans Mazda. There was Takuya Yura, who was in charge of outlining the aesthetic and aerodynamic design of the car, importing many of the ideas used in MazdaSpeed's 717C. In a sense, the OX-99 was a "street" 717C, but with a piston engine instead of a rotary engine. 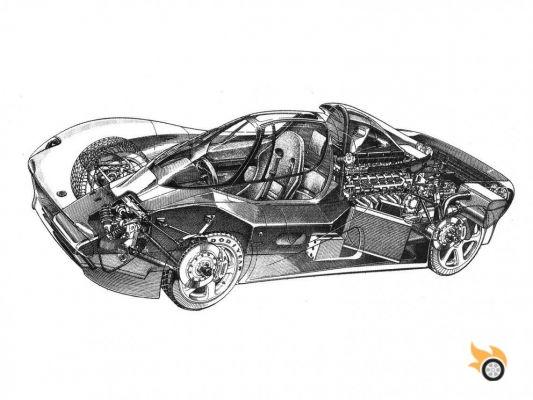 The idea of the OX99-11 was to create a supercar as close as possible to an F1 car.

Thus were born the first sketches of the OX99-11, a car with a carbon fiber and aramid chassis, unlike the 717C (aluminum) with the driver seated in a central position, as F1, and with the passenger just behind him, as the Tramontana would copy years later.


The engine, a Formula 1 OX99, was anchored directly to the chassis, as a self-supporting element, using the same Formula 1 transverse six-speed gearbox to deliver power to the rear wheels.

The engine, a 3.5-litre, 72° twelve-cylinder V12 with a five-valve cylinder head (what Yamaha called the Genesis system), was down to 400 horsepower for civilian use, but retained the ability to rev over 10,000 rpm. In reality, the engine was not 100% Yamaha sourced. As we told you days ago, in their interest to enter Formula 1, Yamaha acquired the Judd block to create their own five-valve cylinder head and sell it as their own engine. Interestingly, the same block would be used in the Mazda MX-R01 at Le Mans, so the connection between OX-99 and Mazda went from the aerodynamics to the engine. Curious, isn't it? 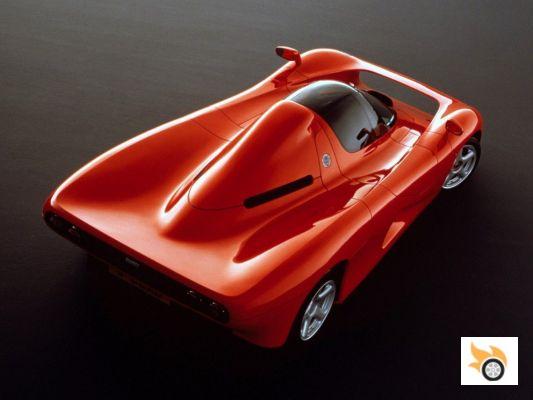 The suspension, both front and rear, used F1 solutions as well, with double triangles with airfoil arms made of chrome molybdenum steel, supporting machined sleeves, and with "in-board" spring-shock assemblies operated by connecting rods, to reduce both aerodynamic drag and unsprung masses.

Interestingly, although the chassis was made of composite materials, the bodywork was hand-crafted aluminium, which is particularly commendable given the complicated shapes of the bodywork.

The whole body of the OX99-11 had been designed to work as an aerodynamic element, with a fully functional front wing, and a rear wing that fulfilled aerodynamic functions as well, extracting air at high speed from the rear diffuser, and squeezing the rear end down at the top. 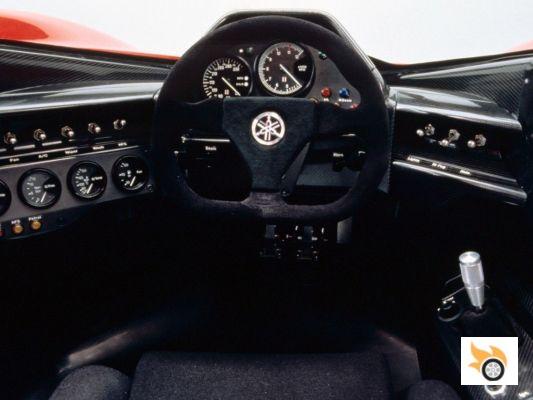 The interior looked like something out of a fighter jet. The pilot was covered by a cockpit, surrounded by clocks, all with a very racing touch.

Yamaha promised a 0-60 in less than 3.5 seconds, on the way to a top speed of 350 km/h, and cornering in excess of 1G of centripetal acceleration.

The car was developed in just one year, between 1991 and 1992, when it was presented to the press. By then four chassis had been built. Three of them had been dressed with bodies, one for development, the other two for the press launch. The fourth chassis had been left as a technology sample unit (pictured below). 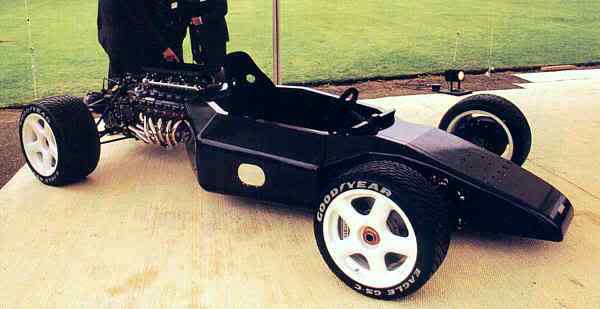 The press was enthusiastic about the OX99-11. It was the closest thing to riding in an F1 car to date. It was fast, it changed direction like nothing else. It was light. The engine literally screamed, and it was usable even below what was considered "idle" in F1, 6,000 revs at the time.

But soon things started to go wrong. The firm in charge of the car's development, IAD, started arguing about the costs of the project with Yamaha, and Yamaha repatriated the project to one of its divisions, which had to put the car into production by 1993. With the F1 project also underway, the racing division could not cope with both technological challenges at the same time.

Thus, the project was delayed, and that delay was lethal. The great economic crisis in Japan caught Yamaha with the project half-finished, and the project was put on hold indefinitely, until the crisis passed. But by the time that was a reality, Yamaha had lost interest in making this car. 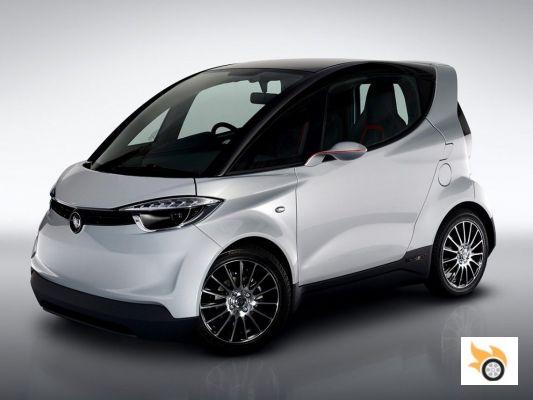 And so we arrived in 2013. From that experience, contacts were born between the people of the firm of the three tuning forks and Gordon Murray, who was designing cars for McLaren at the time. Murray used his contacts to talk to Yamaha, which also wants to get into the world of sustainable urban mobility.

And so the MOTIV was born. It's a radically different project to the OX99-11, no doubt about it. But it has similarities: it is designed by a British engineer, it uses technology derived from Formula 1, and it will be equipped with an internal combustion engine (in its non-electric variant) of Yamaha origin and high revolutions to create a spirited product?

The best part? Unlike the OX99-11, planned to cost what today would be more than a million euros, the MOTIV promises to cost less than 10,000 euros if it reaches the dealerships. Now that's the democratization of racing technology... Although who could have kept one of the only three OX99-11s?

add a comment of Yamaha OX99-11, the first car with tuning forks