The Peugeot 402 and its Eclipse version

On the other hand, in the United States the Streamline style was becoming increasingly fashionable, a design trend evolved from the Art Deco style, which was applied to all kinds of objects and architecture. It was a style characterised by horizontal shapes with rounded ends that suggested movement, modernity, speed and aerodynamics.

In that context, Peugeot decided to take a risk with the aesthetics of the model that would replace the 401 and 601, and designed a 402 with revolutionary shapes, a car that integrated for the first time in history the headlights behind the grille, and had a rounded and aerodynamic design, and that marked an epoch. Many mention the Chrysler Airflow - which appeared a year before the Peugeot 402 - as the inspiration for the French model, but if we take into account the time required to design and prepare the industrialisation of a car, it is logical to think that Henri Thomas - responsible for the design of the Peugeot 402 - and the designers of the Airflow - a car that would deserve another article - came up with similar designs because they were inspired by similar ideas?

Interestingly, and in comparison with the Citröen Traction Avant -which appeared only a year earlier-, the 402 had a relatively classic architecture, with a body mounted on a separate rear-wheel drive chassis and well-proven -and very well-functioning- engines and suspensions. It is certainly paradoxical that the Peugeot model combined innovative design with classic technology, while the classic Citröen design concealed a very innovative front-wheel drive and monocoque chassis architecture.

Thanks to its separate chassis, the Peugeot 402 could be offered in different body styles and body styles, and was very well received, but the Second World War meant the virtual disappearance of the model, and Peugeot had to concentrate on the production of transport versions of the 402, not to mention that - due to the war - there was no market either. After the war, and when Peugeot was again in a position to manufacture cars, the fashions and state of the art technology had evolved, the 402 had become obsolete, Peugeot reacted and knew how to hit the nail on the head again with the great 403 designed by Pininfarina, another model that would also give for a good article.

Incredible as it may seem, the innovative Peugeot 402 Eclipse was the brainchild of a dentist, Georges Paulin. He was a genius amateur designer who patented the retractable hardtop system in 1932 and later fought with the French resistance in World War II and is officially considered a national hero. Want to know a little more about the Eclipse?

The other "father" of the Eclipse was Émile Darl'mat - a Peugeot dealer - who arranged for Paulin to present his designs to coachbuilder Marcel Pourtout, who hired Paulin as a designer for Carrosserie Pourtout. The Peugeot dealer knew there was a market for this type of car, and in collaboration with Portuout they produced some Eclipse units based on 301, 401 and 601 chassis. But it was the 402 Eclipse that marked the beginning of mass production of the first ever hardtop convertible. Moreover, the modern, aerodynamic design of the 402 was a perfect match for the innovative roof concept of the 402 Eclipse.

Between 1935 and 1940, some 580 units of different versions of the 402 Eclipse were produced, but it was inevitable that World War II would spell the end of this innovative concept. Isn't it curious that we had to wait until 17 years before the Ford Fairlane Skyliner appeared to see a retractable hardtop again? The short-lived Ford model was not very successful and again we had to wait almost twenty years to see a retractable roof on the streets again... but we'll leave that for another article. 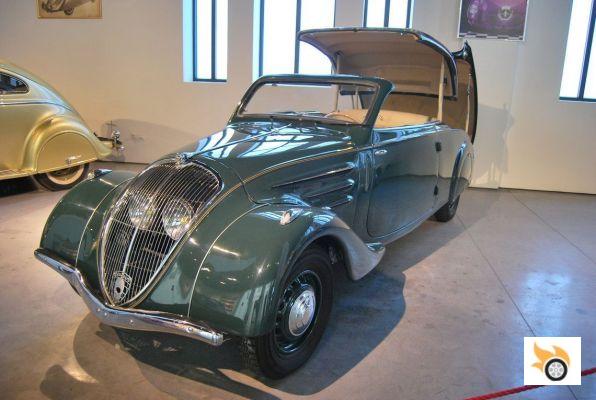 In Spain we can see a unit that survived the war in the Automobile Museum of Malaga, this unit belongs to the private collection of Joao Magalhães. At the outbreak of war, and before the German boots stepped on French soil, its previous owner decided to bury it completely so that it would not fall into the hands of the invaders. It lay there throughout the conflict, and was recovered in 1946 in a pitiful state. This was relatively common at the time to avoid expropriation.

It needed a complete restoration that took more than two years. The miracle was possible because another 402 Eclipse unit was obtained, allowing the Portuguese craftsmen to imitate it piece by piece. Otherwise it would probably have been unrecoverable. For those of you who do not know the treasures housed in this museum, make a hole, some models are unique and unrepeatable. Most of them are very rare and bizarre, it's not your typical car museum. 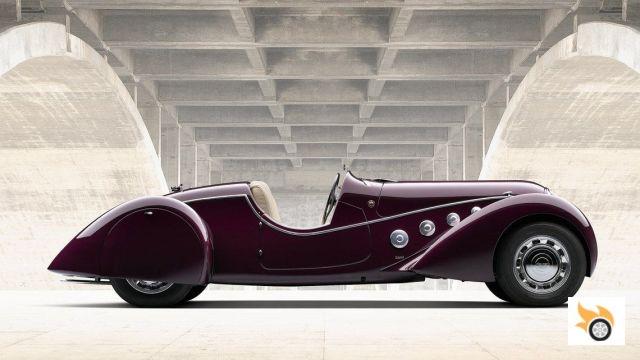 Darl'mat also commissioned roadster and coupé sports models with beautiful designs -also by Georges Paulin- and a certain pedigree achieved at the 24h of LeMans. Perhaps some of the most beautiful Peugeots of all times, cars that had nothing to envy in style to the aristocratic Bugatti of the time. 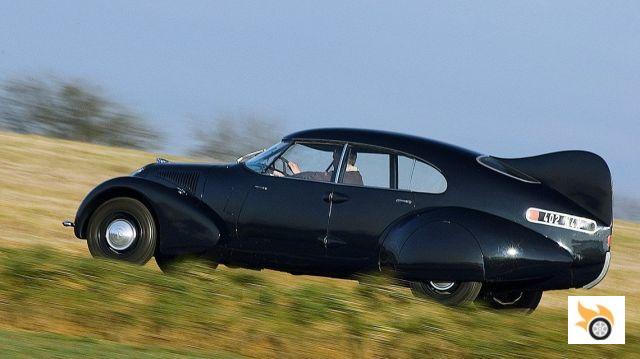 The swan song of the 402 as an aerodynamic car was the 402 Andreau, designed by the engineer Jean Andreau, which was the culmination of the search for aerodynamics in its time. It seems that five examples of this fabulous design were built. 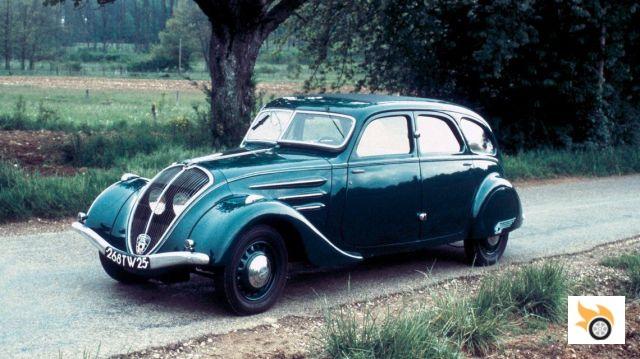 The 402's contribution to automotive history

The Second World War was the premature end of the Peugeot 402 and its revolutionary design ideas. It was a very advanced model in terms of design, but after the war, the monocoque bodywork - with its advantages of lightness, passive safety, lowered centre of gravity... and new design fashions appeared... However, it would be fair to acknowledge the Peugeot 402, which was perhaps the first European large series car with an aerodynamics-focused design, the first to incorporate headlights in its front grille, and the 402 Eclipse, which was the pioneer of the retractable hardtop convertible, a category that would also deserve an article.

Audi A8 styling past and present ❯

add a comment of The Peugeot 402 and its Eclipse version