Audi A8 styling past and present

Few will doubt that Audi is one of the brands that takes more to the extreme in the concept of unifying the design language for its entire range, and does so to an extent that -even for the most observant- becomes complicated to guess which Audi is following us through the rearview mirror, or forces us to have to look for the seven differences -or value the size- to know if we are talking about an A3, A4, A6 or A8.

It's a subject that has been much debated, and although I can understand the advantages in terms of brand image, I think any design aficionado will agree with me that it's a bit boring to have so much uniformity. Anyway, and in all honesty, this trend towards aesthetic standardization in Audi comes from afar, because since the 70s, the Audi 50 and 80 already shared aesthetic language, something that has been a constant in the brand, and -it must also be said- a trend consolidated in the rest of German premium brands.

Obviously, this uniformity has not been alien to the A8, a model that although with its own personality, has been following the trends of the brand, a personality that we will analyze through the different generations of the A8.

True, the V8 was not called A8, nor can it be considered part of the family (it could be considered a luxury variant of the Audi 100, a model with which shared much of the monocoque and components of its steel body) but I have allowed myself to add it, as it is still a commercial and aesthetic predecessor of the A8.


The aerodynamic and functional design of the Audi 100 of 1990 marked an important change in the design of the brand, and with respect to the Audi of previous generations (remember the famous Quattro) and is that the taut lines, angular and square gave way to well-defined shapes but very smooth and aerodynamic. The volumes and large flat surfaces were still reminiscent of the first Audi 80, but the design absolutely functional and with little concessions to the gallery was revolutionary in its time, and -along with the Quattro- laid the foundations of the technological image, modern and functional at the same time of the brand.

I remember that its design impressed me and that some said that its design was -not officially- Giugiaro's... true or not, it is curious that shortly after the Audi 100 appeared, Giugiaro presented the Marlin, a concept car that only lacks the four rings and the Audi grille on the front...

On the basic design of the Audi 100, the V8 added a front with a grille that foreshadowed that all Audi would look until the arrival of the single frame, and a rear with huge optical groups that went from side to side, designed in a way that emphasized the width and volume "cubic" of its rear, a feature that seems to return with force in the latest generation of the A8.

Appearing in 1994, the A8 was the performance model Audi needed to be able to play in the same league as Mercedes and BMW. Allow me to go off topic to express my doubts about the economic profitability of these cars, models that need a huge investment for their design, development and industrialization, and then sold in relatively small quantities... True, profitable or not, Audi needed -and needs- to demonstrate that it is at the same level as its German competitors.


The A8 inaugurated a body built entirely in aluminum, and included all-wheel drive; the idea was to differentiate itself from the S-Class and 7 Series with a product of technological and modern image, and the concept was transferred very successfully to its exterior image. Relatively discreet in its styling and with hardly any ornamentation, its discreet and aerodynamic image was intended to suggest a different kind of luxury to its competitors, looking for a younger customer - at least in spirit - and interested in technology.

Its all-wheel-drive architecture also allowed for a significantly different silhouette and volumes to those of the large rear-wheel-drive saloons, with a more set-back rear axle -which resulted in good roominess and rear accessibility-, a longer wheelbase, and a slightly more forward cabin. The aesthetic language was not very different from the A4 of the time, but the almost minimalist and very clean solution of the rear panel and its special silhouette always appealed to me. Ah, a detail that could be overlooked; the discreet U-shaped chrome frame of the lower air intake, a detail that gives some visual continuity to the upper grille, a detail that -perhaps not premeditated- anticipated something important for the brand's image.

Of course, if I could have one, I would choose it in "aluminum" color -with black underbody-, the color of the material with which it is made, and I would say that inspired and conditioned in some way the shapes of its bodywork. 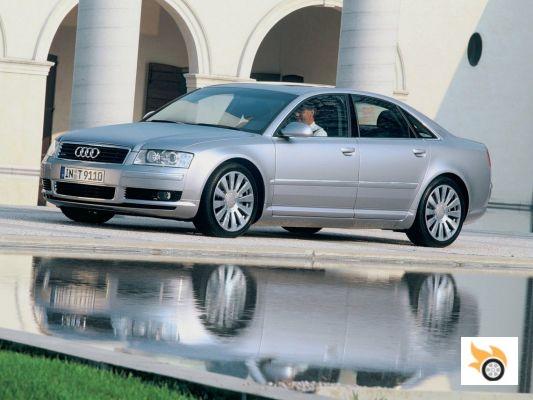 The new generation did not involve a radical change in the proportions, kept its special silhouette with a slight wedge shape, but the car gained presence and rotundity with a rib under the waistline that added tension, a nerve rib that becomes vertical in the front and serves to frame it, adding character. The whole car loses its roundness, appearing horizontal lines here and there, elements that help to lighten it a little visually, although I find very interesting the solution for the rear panel, clean and expressive rear optical groups, high and trapezoidal, which emphasize a smooth fall of a relatively high hood. Very emphatic and elegant, and suggesting a certain dynamism.


The A8 D3 began its journey with a split front grille design, although if we analyze it carefully, we will see that the upper and lower part presented a clear stylistic unity, it is almost as if they were again hinting at something ...

Two years before the appearance of the second generation of the A8 -surely too late to influence the design of the A8 D3-, Walter De Silva was appointed in 2002 head of design at Audi, and in 2003 was presented the beautiful Audi Nuvolari Concept, a prototype that foreshadowed what would be the new design of the brand, and showed for the first time the famous single frame grille (single frame). How did De Silva's team came to the idea of the single frame? I imagine that on the one hand, it was the natural evolution of the split grilles of the previous Audi, and that on the other hand, the bizarre Rosemeyer Concept of 2002 - which in turn was inspired by the classic Auto Union racing cars - could have inspired them ...

Naturally, Audi didn't take the risk of debuting the single frame on the A8, and the famous grille first appeared on the 2004 A4 and A6 - models aimed at a younger clientele receptive to new ideas - and once its acceptance was proven, the A8 debuted it in its 2006 restyling. Not that the A8 lacked appeal with its traditional split grille, but I must admit that the rotundity of the single frame fits like a glove to a car like the A8. 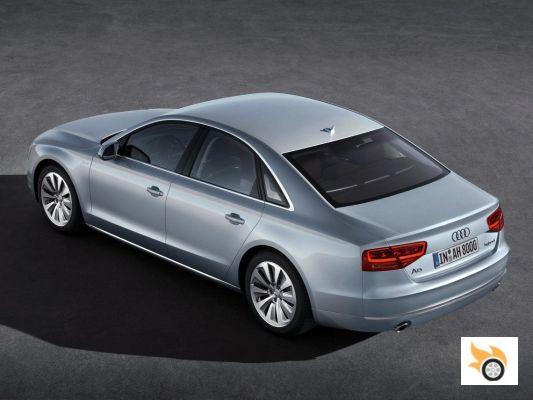 The A8 that has just been replaced and that was designed under the tutelage of De Silva has perhaps been the most stylish of the saga. Its less cubic shapes, its clean sides with subtle shoulders, the lower ribbing that ascended towards the rear, the curved surface of the upper part of the boot lid, its relatively clean front end, with headlights in which the LED line marked an expressive look... Without a doubt, the "Latin" hand of good old Walter is noticeable.

Of course, the A8 D4 didn't take great aesthetic risks, but its rotundity didn't lack a certain elegance, and its shapes and volumes have the necessary fluidity. Personally, I've never been a fan of the cut in the rear panel -the one that sinks the license plate area- and how it integrates with the rear light clusters, but I must admit that it is part of the character of the Audi of the De Silva era. Interestingly, this area was restyled, adding a horizontal chrome strip that adds some pomposity, and enhances the horizontality, a motif that previewed the language of the A8 that just appeared. 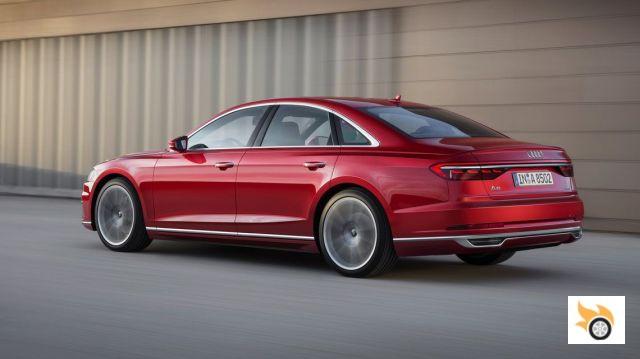 In 2014, Audi showed the Prologue, a concept car of which the brand claimed to advance its new aesthetic language, a language that translates into the new A8 D5, and that inevitably - and I say inevitably because of the boring homogeneity -, will reach its entire range. I remember seeing the Prologue live, and although it didn't particularly catch my eye, I did find it very attractive.

But the new A8 D5 is something else. It is clear that Audi has intended that its flagship has a striking image, and certainly has succeeded. The problem is that along the way it has lost all semblance of elegance and harmony.

If we start with the huge front grille, -by all accounts unnecessarily large, as it has blocked side areas-, and with an upper edge too high. Let's see: if a wide effect was intended, the logical thing to do would have been to lower the front bonnet a little - as on the Prologue - to create a slightly lower, yet wide grille. Isn't it absurd to keep enlarging the grille in all directions to make it look as fierce as possible? 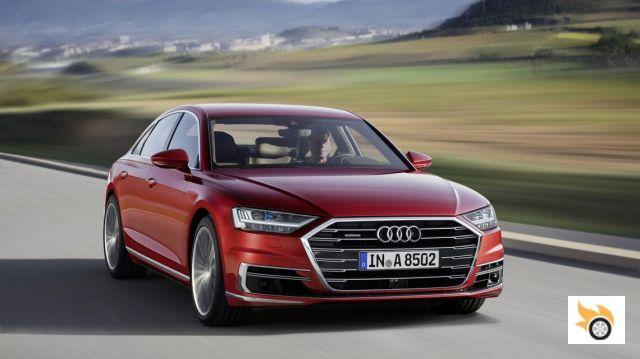 Will the grille of the Audi of the future literally take up the entire front end? Well, it looks like we're heading that way...

As if that weren't enough, additional side grilles profusely decorated with chrome finish off the baroque design work, with a very cubic overall volume of the front overhang, which is visually heavy and overloaded like few others.

Something more logical is the side, although the truth is, it does not seem coherent that in the waist three types of ribs fight for space in such a narrow area, did they really need all? We continue touring the car towards the rear, and we find a very cubic third volume with a prominent rear bumper, a bumper that seems to have the sole purpose of completely filling the parking space -and the ego- of the CEO on duty.

Are those things in the corners the exhausts, or are they "trims"? Either way, whatever they are, they finish off the showiness that the stylists seem to have pursued? Minimalism? What's that? I counted up to 15 horizontal ribs on the rear panel?

A pity, because the Quattro, the TT, the Audi 100, the first A6, quite a few of De Silva's Audi's come to mind... and I can only regret that Audi is liquidating its rich tradition in the field of design and style, maybe times are changing, or they're looking for a new type of clientele.

add a comment of Audi A8 styling past and present