This is one of three headings in a telegraphic press release issued by Renault in response to the results announced by Deutsche Umwelthilfe (DUH), which stands for German Environmental Aid Association. The NGO has once again called on the services of the Bern University of Applied Sciences (Switzerland). It aims to draw attention to the failure to comply with emissions regulations, which in the case of the Espace are up to 25 times higher than the Euro 6 ceilings.

The fact that DUH has also investigated a German manufacturer, Opel, should make us think that this is not a patriotic vendetta against non-German manufacturers. This time it was Renault, but next it could be SEAT, or Volvo, or Toyota. The French carmaker is not amused by all this, and has hit back: "the test procedures of the University of Bern are not in line with European regulations".

To what extent is that true? While all the results are in the custody of the University of Bern (and are confidential), DUH has explained how it did the tests in a report available in German and English. Nine tests were carried out, eight of which correspond to the NEDC cycle, and one to a test cycle that maintains constant speeds for minutes, outside the regulations.

The tests in the laboratory were carried out in most cases with the engine warm, and only three with the engine cold. Interestingly, the lowest NOx emissions coincided with the cold tests, when the anti-pollution systems are supposed to be less effective. When cold, 235, 69 and 62 milligrams of NOx per kilometer were measured. In hot, and being benevolent comparing, emissions have been at least five times higher. 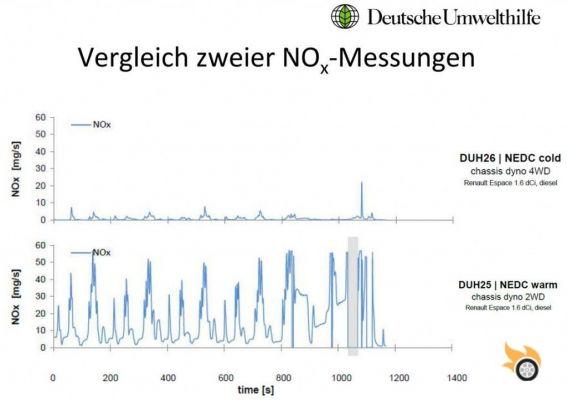 The worst result, with 2,061 milligrams of NOx/km, was obtained with the dynamometer configured for front-wheel drive, i.e. only one roller and with the rear wheels stationary. In all the tests carried out, CO2 emissions, which are directly related to diesel consumption, remained within a range of 133 to 145 g/km. In other words, consumption has been relatively stable. The other seven NEDC tests have been done with double rollers, all wheels in motion.

At no point does the DUH claim that the Renault Espace 1.6 dCi (9RM) contains a defeat device that detects specific test conditions, and if it does, it certainly doesn't rely on rear wheel speed. However, the huge spread of the data, with diesel consumption virtually unchanged, provides grounds for reasonable doubt about the honesty of that programming.

An injection anomaly is ruled out, as no OBD errors were recorded, nor did the "check engine" light come on. Moreover, the DUH states in its report "further measurements on vehicles of the same category are necessary to confirm this behaviour". If there is no hidden programming, why does the Espace 1.6 dCi go from meeting the 2015 limits to not exceeding any Euro regulations and emitting as much NOx as a 1980s naturally aspirated diesel? 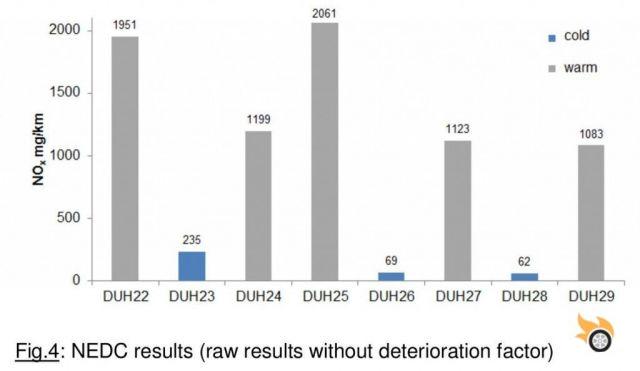 DUH wants the KBA to do more tests and verify the ones they have done, by way of a complaint. It makes no sense for them to falsify their tests, as they would become the hunted hunters.

Currently the Kraftfahrt-Bundesamt (KBA), the German homologation authority, is investigating 50 models from 23 different manufacturers. From the French brand, only the Kadjar is being investigated, but the Espace could soon join the investigation. The indications are there. It's one thing if this particular model "nails it" in homologation conditions, but the difference in performance of its anti-pollution systems is very large.


The 1.6 dCi engine does not have, on this model, a selective catalytic reduction system or SCR. In other words, no urea or AdBlue is injected into the exhaust to neutralise NOx. Surely, the emission of these gases would be considerably reduced if such a system, which is not added to any modern diesel for cost reasons, were available. The Opel Zafira Tourer does have SCR, although it was switched off during testing.


The results were obtained in a laboratory set up for gas testing. According to the DUH, measuring instruments were used that comply with the ECE R83 standard, which is valid in both Switzerland and the European Union. NOx measurements have been checked with a chemiluminescence analyser. The ambient temperature was 20 to 30 degrees, with a humidity of 5.5 to 12.2 grams/kilo. They even indicated the model of the dynamometer, the only thing missing was the name of the laboratory operators.

Is DUH looking for the limelight just for the sake of it? Not in my opinion, which is as contemptible as any other. The fact that he started with Opel, the most important non-premium German manufacturer after Volkswagen, gives his speech more validity. Who will be next? To be sure. It's legitimate for Renault to be entrenched in a stance of honesty and "this doesn't go with us", which is exactly what Opel did. are they lying? I won't go that far, but it's a possibility. The KBA will have the final say.