And it is of the latter, and more specifically of its second phase, produced between 1987 and 1991. Icon among the icons of the sport utility vehicles of its time, it also earned, like all its relatives, a bad reputation as a "dangerous car", mainly undeserved and more related to the lack of driving skills of many of those who got one than to the intrinsic dangers of the device.

Today it has passed that first phase of "old car", which has purged and sent to the scrapyard many units in poor condition, and is becoming a "pre-classic" highly valued by some of its owners. While it is true that some of them, with cars in perfect condition, can ask up to 7,000 euros for a five GTT in perfect condition, it is no less true that, with a little patience and negotiating skills you can buy one for about 3,500 or 4,500 euros in "decent condition".

For a short time, I was lucky enough to be able to enjoy rallying with one of these little things, and I can tell you about it in a very personal way. But let's start with what you see first, the aesthetics.

The Supercinco GT T is striking for that mix of plastic in the form of oversized fins, front apron and false rear diffuser that stylize the shapes created by Marcelo Gandini for the Supercinco. The phase 1 also have some false air intakes in front of the rear wheels, to pay homage to the great R5 Turbo rally. 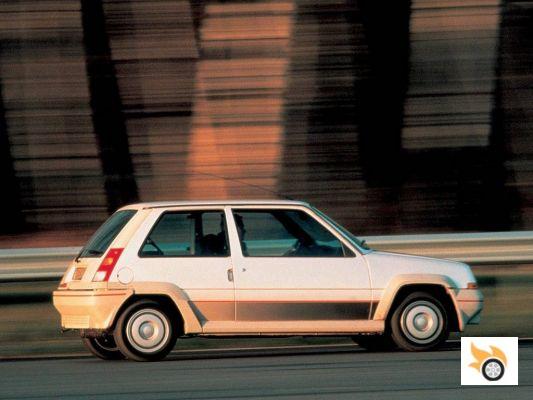 It's fun to drive, it's fast, it's "pretty", and it's going to be a very popular classic very soon.

It is a "very eighties" car, which is liked, but you have to watch out, because finding a unit without rust, and with the paint in good condition and the bumpers of the color that touch, is complicated.


Then there's the issue of alloy wheels: Renault used only 13-inch wheels (despite how small they are for today, they are well compensated aesthetically), so finding suitable tyres and "aftermarket" wheels can be complicated. Also, the wheel arches don't fit much bigger wheels.

The cabin is more eighties, but very "sporty" in certain aspects. It's all hard plastic, but the gauge cluster is super complete, with oil temperature and a turbocharger pressure indicator, two things that many modern cars would like, now that they don't even use coolant temperature gauges... 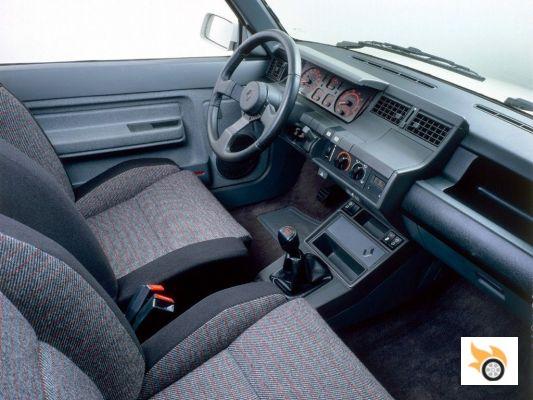 The seats are "french", soft, but with good ears. Of course, they age fast, so finding one of these cars with upholstery in good condition will be difficult.

The recipe of the Supercinco GT Turbo started with a monocoque chassis, with McPherson struts at the front and trailing arms at the rear. The engine (remember, the original R5 had a longitudinal front mid-engine), with a displacement of 1.4 litres, but with an in-block camshaft and valves operated by pushrods and rods (yes, 1960s technology), was located on the front axle, in a transverse position.

But to the "old-fashioned" block was associated, to give it life, a Garret T2 turbocharger, associated, of course, to a carburetion system. This made it a complicated car to start in certain situations (hot engine), and it had a "choke" for the manual cold start.

The turbo for "stage 2" was liquid cooled and oil lubricated (stage 1 was air cooled, and therefore less recommended, as the engine was more fragile). It had an intercooler, and offered 120 maximum horsepower, responsible for pulling just over 850 kilos of weight, which made it a real missile for the time.


The steering was unassisted rack and pinion, and there were no electronic aids of any kind. The gearbox was a five-speed manual.

To start one of these cars is to be transported back to the golden age of compact and sport utility cars. Just the brassy sound of the engine and the plastic feel of the interior put you on a different plane from today's cars.

Moving slowly with it you discover a somewhat heavy steering, and you feel in a car with a lot of visibility, but at the same time gives the feeling of being fragile if you hit it. The monocoque is not at all rigid compared to a current chassis, and with a very hard suspension (very hard for its time), you notice that "something flexes". 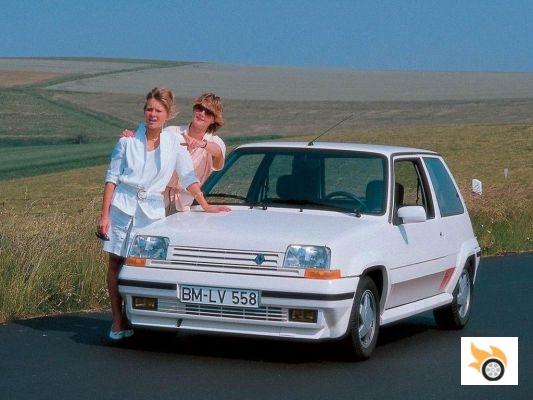 It's not comfortable, and it's a bit of a chug in the city. But the beauty of these cars is to enjoy them on curvy roads. Throttle full throttle on a straight road and you quickly discover that the car is not slow at all. In its time it was faster than any of its rivals (205 GTi, Golf GTi...) in pure acceleration.

But it wasn't a bit slow in a corner either. Approaching a second gear corner with one of these cars is quite an experience. You can accelerate under braking, put the steering wheel in, which attentively telegraphs the available grip on the front end, and see how the car gets into the corner without hesitation or nose dive. It's an exceptional front end in that sense, without being heavy, even when loaded with the iron block of the engine up front.


The support of the car is frank, and cornering is easy, because the steering allows you to aim to the millimeter, and although there are bumps, it is not a bouncy car that breaks the trajectory. Of course, if you step on hard holes, the 13″ tires are easier to get into, and compared to a car with more current shoes, you'll feel more impact, while you'll also notice how the chassis of the car is "one more spring", bending ....

But the heart of the action happens when, having reached the apex, and with the exit of the corner in sight, you move on to the throttle. The first thing you'll learn is that this is a car with lag, with a lot of lag. From pressing the throttle to the turbo charging and the car kicking over takes a second and a bit, perfectly perceptible, that will make you start accelerating too late to play with the line.

After a few corners you'll learn to deal with the lag, and get on the throttle a little earlier than you would with other cars. If you find that you're going long on the line, then suddenly flattening the throttle will allow you to play with the line a bit, but it doesn't bite as much as a 205 GTi, and isn't dangerous as a result.

The problem is traction. With 13″ wheels and the tires sold for the size it uses, there's no "all-out" grip. And although it's not a car that loses tons of torque through the wheels, it's true that if the ground is slightly dirty, or wet, or you're taking full advantage of the car, you'll start to lose the inside wheel to the corner.

Another problem is the brakes. Not because of instant power, which is fine at first, but because they heat up quickly if you overdo it, for the same reason as the size of the rims, so if you get excited, you can end up suffering from fadding.

Problems aside, it's a hugely addictive car. Like a MINI R53, a Clio RS or an Abarth 500, it's not so much about the speed, it's about the pleasure of cornering and getting addicted to the power kick, which comes concentrated in one area of the rev counter.

A car worth preparing

Finding a production unit is a little less than mission impossible.

The problem, or I don't know if we can recognize it as a problem, but we can leave it as an "issue", is that these cars are very suitable for preparations. It's difficult to find stock units, and within the prepared ones there's everything from cars with wild overboost almost impossible to drive, or rock hard suspensions, to "well executed" things with "bigger" rims that improve the original Renault recipe.

My advice? If you're hesitant about preparation, look for something stock and slowly "build your own A-group". It's not complicated to get a locking system, and playing with the rest of the suspension elements is "relatively easy" as there is a lot of material for sale. Just remember what we've talked about before: it's not better to have a harder car, but a more competent one that has its wheels glued to the road and doesn't bounce from one side to the other.

Choosing a good car comes down to three fundamental aspects. The first is the engine. This can easily overheat if not properly cared for, and this can bend or crack the cylinder head, burn the head gasket and start a whole host of problems.

Make sure there is no oil in the coolant, and, if possible, check the compression of the cylinders, as this is the best measure that the engine is "as it should be", both in terms of cylinder head, valve seats and rings. 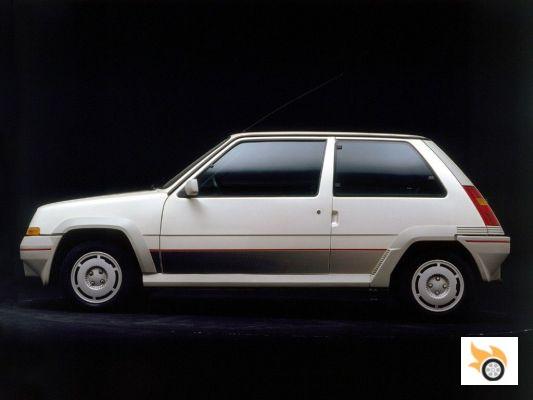 Without leaving the engine, there is the turbo. Checking the axial clearance of the compressor should be a "mandatory task", but I know that not everyone can do it before buying the car. Make sure that the car doesn't consume oil, or smoke bluish smoke from the exhaust. Check that the turbo "kicks in", and the engine doesn't choke at low revs. A service book would be ideal, but in such an old car it sounds like a chimera impossible to find.

The other two aspects to look out for are the bodywork and the bodywork... The first aspect to look out for is that the car hasn't had any serious accidents, and for that, an insurance report and an in-depth look for unexpected welds in the chassis will tell you everything you need to know.

Think that it is a car with a "soft" chassis, and it is not advisable to buy it already "bent", because it will give you a lot of problems.

The other aspect to watch out for is rust. Check the underbody, battery support, glass area, under the doors... Everything you can see. If it's rusty, pass on that unit, because it's very expensive to repair.

Whatever the bar talk says, it's not a dangerous or difficult car to drive.

If I had to make a top ten list of cars to have in my garage, I'm pretty sure an R5 GT T would be on it. I think that tells you all about my liking for this wild sporting flea.

I know, it's not safe, certainly not by today's standards, and no, it's not fast and it doesn't grip like a modern car, but it's one of those cars that transmits, that makes you smile, and that you can learn a lot from. 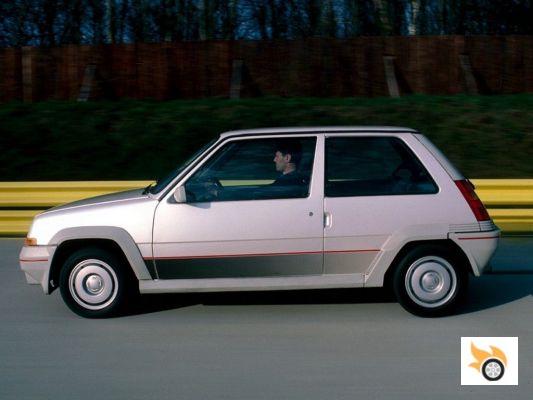 Put some bars on it and homologate it for rallying and you will have the perfect tool to have fun on weekends. Don't put them on it, leave it as standard, and you have a potential classic.

Does the turbo jump on corner entry? Yes, the legend is completely false. It did a lot of damage to a whole generation of turbo cars, which went out of favour in favour of 16-valve engines, only to come back now that emission regulations leave no alternative.

But no, these cars didn't have turbo or engine problems. It all had to do with a good part of drivers who didn't understand how to drive them, how to anticipate lag, and how to enter corners properly... Urban legends, yes.