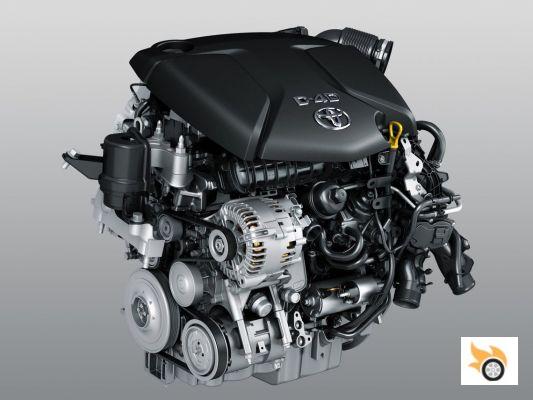 If we take a closer look, of those Toyotas that are sold with the D-4D badge, a minority use engines that are actually designed by the manufacturer. When Euro 6 arrived, Toyota decided not to invest more money in developing diesel engines that could not meet the standard with minimal changes, and preferred to rely on other manufacturers. Efforts have focused more on petrol options.

The current 115D, like the 150D, are sourced from BMW, specifically the N47D16 and N47D20. These engines have been infamous in BMW owner forums for timing chain problems, but it seems that the problem was fixed a few years ago. Nor should it be said that Toyota diesel engines are indestructible, just mention the 2.2 D-CAT and its cylinder head problems, not recognized by the manufacturer, the owners "eat" the problem when it appears out of warranty.

Only the 1.4 D-4D (or 90D) of the Auris and the 3.0 D-4D of the Hilux and Land Cruiser are "pure" Toyota. In the Yaris range, the diesel option has been removed in Spain (although it is still offered in Europe), in the same way that the Aygo does not have this engine available, nor did it have it in the first generation. The small and large engines were upgraded to meet Euro 6, but with the two-liter engines (2.0 D-4D) they didn't bother. It makes perfect sense, Toyota sells more petrol engines.

Right now Toyota's mix is like this: 44% petrol, 31% hybrid, 25% diesel. The share of hybrids continues to rise, as they are already in the volume segments (Yaris/B and Auris/C) and not just in the niche models (Prius and Prius+). The RAV4 SUV has also had hybrid powertrains since last year, but Avensis and Verso do not and will not have them in this generation. The next major launch, the C-HR, will also have a hybrid version.


Johan van Zyl, CEO of Toyota Europe, believes that by 2020 the share of petrol cars will be down to 15%.

Toyota's goal for 2020 is that half of what is sold is hybrid, and to have a hybrid option in every model in the passenger car range. The exception is the Proace van, which in any of its versions (industrial, mixed or passenger) is only offered with diesel engines which, by the way, are manufactured by the PSA Group. Land Cruiser and Hilux are also an exception in this respect.

Will there be a hybrid in the A-segment, i.e. for the Aygo? It's technically complicated to fit all the components into such a small car without making sacrifices in the boot, and it's also complicated to make it a profitable combination (for the manufacturer and for the customer). A possible solution could be like Suzuki's for the Baleno, a very light and very compact semi-hybrid system that achieves appreciable gains in consumption, without sacrificing space or increasing weight significantly, and at a reasonable price.

Therefore, it is clear that Toyota will stop selling diesels when its customers no longer ask for them.

It's not an anti-diesel plan like the Lexus brand. Well, that needs to be explained. Lexus only offered diesel engines for the IS (220d, and 200d later), if it wanted to sell anything in Europe, but when the hybrid version arrived that was no longer necessary, nor was it necessary to spend money on converting that engine to Euro 6. They could have used BMW mechanics, as in the Avensis, but while they were at it, they took the opportunity to declare themselves anti-diesel and stop offering them.


In 2013, during the Frankfurt Motor Show, I interviewed Daniele Schillaci, senior vice president of sales and marketing, and he assured me that there were no plans at Toyota to eliminate these engines. Toyota's idea is to offer gasoline, hybrid and diesel engines (whenever it makes sense to do so) so that it's up to customers to choose. In the case of the Yaris and Auris the hybrid share is very high, specifically the compact sells 60% hybrids. Some of the Auris' rivals make this mix with diesel engines.

Toyota's commitment to hybrids is solid, profitable and commercially viable. This has nothing to do with Dieselgate, it comes from before.

However, we can't say the same about competitors. The generalists who have bet on hybrid versions did not achieve sales targets, and the clearest case is PSA with its 3008, 508 and DS 5. As for the Premium, as sales did not accompany, now bet on plug-in hybrids. The only manufacturer that has found the magic combination to sell hybrids on a massive scale is Toyota, an exception worldwide. Lexus has a very important weight of hybrids in markets such as Europe, North America and Japan. In Western Europe, avoiding Eastern countries and Russia, 96% of Lexus sold in 2015 were hybrids. Normal! Gasoline versions are penalized by taxes linked to CO2.

Maybe more than one is wondering "and for a guy who knows nothing about engines, nor cares who makes them, what difference does it make to his life that his engine isn't a genuine D-4D?". For example, Proace vans can be serviced at any Citroën or Peugeot dealership, and they'll know how to service the engine perfectly because it's theirs. The same can be done with the 115D and 150D, they are BMW engines, whether it makes sense to do that is another thing, the workshop hour is not cheaper.


Is a D-4D better than a competitor's rebranded diesel? I said no such thing. Anyway, I'll sign off with a little anecdote. About three weeks ago, I had my Prius stopped for 15 days, and it wouldn't start, I had to ask for assistance to give it "the bottle". A Land Cruiser less than 10 years old came to my rescue, with the 3-0 D-4D 150 HP. After starting mine, while talking to the tow truck driver, I realized that the odometer was over 577,000 kilometers. If you disregarded the reputation/karma blemish for the 2.2 D-CAT, you'd think these people made good diesel engines.