Electricity on board, from the alternator to the electric car (I)

We will try to describe in some depth the electrical system of a conventional car, micro-hybrids, hybrids and electric cars. But before we get into the subject, we are going to explain in a summarized way some concepts that are necessary for the understanding of the electrical system. We will omit the sensors, relays, fuses, and other accessories to not make it confusing. If you already know these concepts, you can move on to the next point. And those who don't, I will try to be as didactic as possible.

As we were saying, we are going to see some things that we are all familiar with, but that we may not know in depth. To do this, we will make an analogy with a hydraulic system, more intuitive and easier to understand. 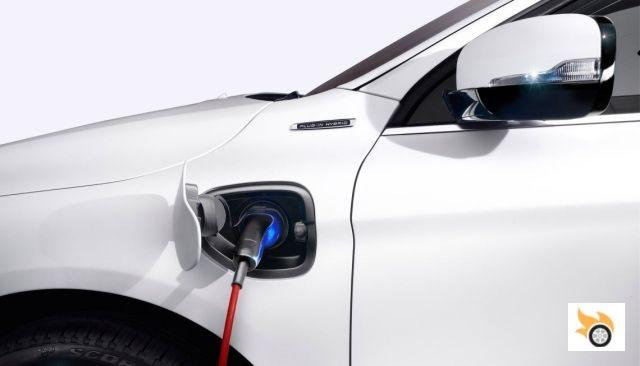 The concepts are quite heavy, but necessary to understand how a battery behaves. It is something similar to the pieces of a puzzle, now it will look messy, but at the end of the article the pieces will be ordered and will make sense. Let's take a look at the most important parameters of the two fundamental components: the battery and the electric motor/generator. 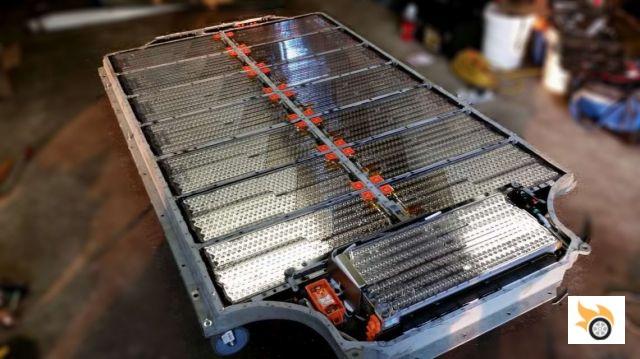 Now we are going to talk about the batteries, fundamental in any electrical system of any vehicle, and of greater relevance now that the electrification of cars is coming. Knowing how they work, we will understand much better the concepts applied to hybrid and electric vehicles.

If you have read our colleague Dinesh's article you will have seen a very detailed explanation of how a lead-acid cell works. Wait, what is a cell? Take a look at the picture at the top of this part: it's a naked Tesla Model S. If you look closely, you can see that there are hundreds of cylindrical cells inside. For experts in the field is the minimum unit that performs the function of generating electricity from a chemical reaction. Basically it is a production standard. A battery will be composed of two or more cells in series (usually) to achieve the desired voltage. In the case of an automotive battery, each lead-acid cell produces on the order of 2 V nominal. Therefore, a car battery has 6 cells in series. That is, 6S. What does 6S mean? Let's look at it.

Now that we know the difference between a cell and a battery, let's see what types of batteries there are, depending on the configuration of the cells. Those of you who like model airplanes will know this very well. Since a battery is a grouping of cells, depending on how they are placed, we will get a different battery, depending on what we want to achieve. If we place them in series, it is indicated with "S", and if in parallel, with "P".


Let's take an example. Let's imagine that we have 4 LiFePo4 cells of 3.2 V and 1 Ah. The four configurations that we can obtain are:

The chemistry of electricity

Depending on what kind of chemical compounds are used inside the cell, we will obtain specific characteristics in energy density, charge/discharge cycles, voltage, current, etc. I attach a summary table so you can see the differences at a glance.

For what we are interested in, NiMH are those of Nickel Metal Hydride (as used by Toyota in the Prius). The ones with this unpronounceable name, LiMnxNiyCozO2, are Lithium Ion, like the ones we have in our mobile phones. Some variation in the compound is often used, such as Tesla, which uses LiNiCoAlO2. But generically they are called Lithium Ion. And finally, the lead acid, which we carry in the car. A note: AGM or gel batteries have slightly different voltages than lead-acid batteries.

And why have I written this "tocho"? Well, precisely to understand the following point, which is key in the electrical system. How energy is stored in the battery.

Depending on the voltage that we see in the table cells according to their chemistry, and within a few margins, a cell will be charged or discharged. Let's take the example of the lead-acid cell. If its voltage (or voltage) reaches 2.4 V, it is charged. And if it has 1.9 V, it is discharged. If we multiply this voltage by the cells in series that we have (remember 6S), it gives us a limit of 14.4V for charging and 11.4 V for complete discharge approximately. Beyond these values, we will be destroying the battery.

Each type of cell, will have some values recommended by the manufacturer, charge and discharge. In general, they should not be charged more than 100% (exceeding the maximum charge voltage), and discharged below 20%. In the case of lead-acid, 20% discharge would be just at 12 V. By maintaining these safety margins, we guarantee that we will not destroy the battery throughout its charge and discharge cycles. It is for this reason, that even if a manufacturer advertises a certain capacity in its battery, the usable margin is less. The battery will never be below 20%. And usually, it will not reach 100% either, to leave room for regenerative braking recharging. Therefore, when you see a certain battery capacity, stick with 70%, which is what is really usable.

What is the power of this cell? Well, if we multiply voltage by current, we have 64 W in charge and 320 W in discharge.

Let's explain what Ah means. Amps per hour gives us an idea of the capacity of the battery. It means that if we use 60 amps of discharge, the battery will be drained in one hour. If we use 30 amps, it will last two hours. And so on. 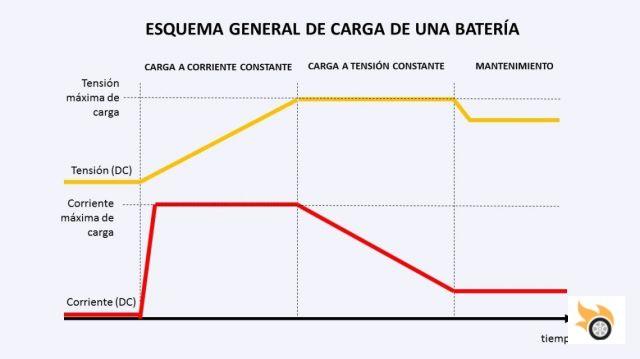 So how do we charge it? This is where the charging curve comes into play. There are generally three phases to charging: charging at constant voltage, charging at constant current, and maintenance. In the first phase, the current is left constant, and the battery rises in voltage. When it reaches its maximum voltage, the voltage is left constant, and the battery will draw less current over time. When the current approaches zero, the battery is fully charged. From then on, we will lower the voltage a little, and leave a small maintenance current.

Therefore, the more current a cell provides, the faster it can be charged and the more power output it will have. This is what our mobile phone does every day, when we connect it to the charger.

Life of a cell

Let's go now to the life of the cells. Apart from respecting the maximum and minimum voltage, it is important to keep them within their working temperature. Batteries also have resistance, so when they are charged and discharged, they get hot. They do not like excessive cold or excessive heat. Their ideal temperature? Like ours: about 25 ºC, with 5 ºC up or down. At that temperature they work well and will last their whole life without any problems. At a higher temperature, it will offer a little more performance, at the cost of battery wear and tear. At lower temperatures, performance drops rapidly. Therefore, it is necessary to control their temperature for good performance.

Why do they wear out? Quickly explained: with charging and discharging, the electrodes expand and contract, producing over time micro-cracks that cause the cell's performance to decline. The number of cycles we saw in the previous table guarantees that, after that number, the cell maintains 80% of its capacity. Therefore, over time, the cell will store less energy. That's why the battery of our mobile lasts less, the more time it has. Remember that these cycles are for full charge, that is, when you reach 0% and charge it to 100%. Therefore, if you recharge it twice from 50% to 100%, it will count as a single cycle. 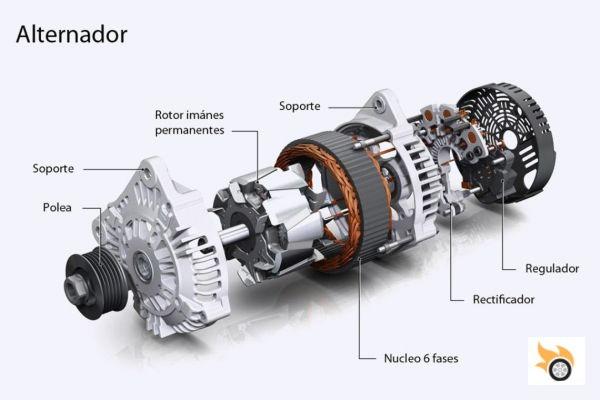 An electric generator is a device that transforms motion into electricity. An electric motor transforms electricity into motion. It's as simple as that. There are different types, depending on their design. But they have in common that there is always a moving part (rotor) and a fixed part (stator).

Generally, there is reciprocity in electric motors: if you move them, they generate electricity. And also in generators: if you apply electricity to them, they move. Therefore, they are generally known as electric machines, because fundamentally a motor and a generator are the same thing, just used in a different way. Whether they can be reciprocating depends on their design, mainly the associated electronics.

As an example, let's use the car alternator. Its function is to generate electricity, and initially, it does not work as a motor. With some small modifications in its electronics, it is possible to use it as an electric motor. To simplify, we will classify the motors/generators in two types: those that work/generate direct current (DC) - Does anyone remember the Scalextric cars - and those that work/generate alternating current (AC). Continuing with the example of the alternator of the car, it generates alternating current. But it converts it into direct current by means of electronics.

Well, we are done with the boring part of the theory, and we have laid the groundwork for understanding how the electrical systems of any car are designed. In the next part we will see the differences between them...

The turbo of the magic bearings ❯

add a comment of Electricity on board, from the alternator to the electric car (I)