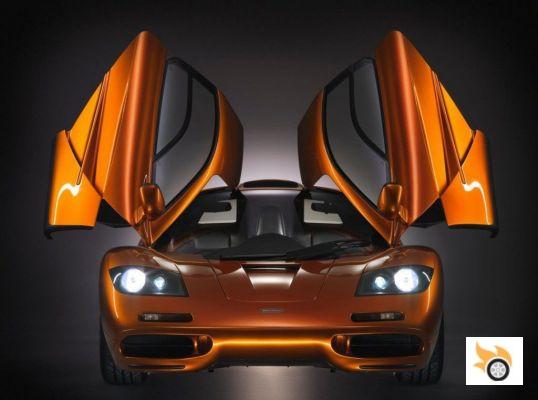 Three unique men were behind its design, Gordon Murray, Peter Stevens and Ron Dennis. The project began to take shape in 1989 and was McLaren Cars' first car. Many hours of racing experience had been accumulated, and the McLaren F1 was innovative in multiple ways. It wanted to be superior to anything else man-made. As McLaren has republished the original 1992 press kit, we're going to look at a lot of tidbits about it.

It was the first mass production car to incorporate ground effect (designed in 1978), heavy use of carbon fibre and lightweight construction in a radical sense, with magnesium, aluminium and even gold for the engine bay. Its curb weight is only 1,018 kg, of course it was the car with the best power-to-weight ratio in the world. Initially 550 hp was announced, but it exceeded 600 hp. Still today it is a figure to respect. As for the aerodynamics, perfected in the wind tunnel, it is still excellent in the middle of 2016.

It was fitted with the S70/2 engine of BMW origin, a 6.1 V12 with 60-degree spaced banks, 48 valves, electronic multi-point injection and variable valve lift. The initial specifications speak of 600 Nm between 4,000 and 7,000 RPM, with a minimum of 350 Nm at only 1,500 RPM. The injection cut-off was set at 7,500 RPM. According to the 1992 press kit, the top speed was expected to be over 321 km/h, which it achieved without any problems due to the increased mechanical horsepower.

Many modern cars can be tremendously humbled by this preclassic with 90's technology.

Goodyear developed F1 tyres especially for it, with dimensions 235/45 ZR17 at the front and 315/45 ZR17 at the rear. As no two tyres were the same, in terms of size and directional sense, it did not have a spare tyre but a puncture proofing kit. Brembo was in charge of the brakes, which had variable cooling, and, beware! it had no brake servo or ABS. It was so well made that the engineers considered that it didn't need either one or the other, and the risk of locking wheels was very low. It didn't have power steering either, it was a bare-bones car.


Its interior layout was very innovative, it is a 1+2, three-seater with a fully central driver's seat. In the press kit it boasted of being the only car in the world with perfect Stereo sound, as the driver was in the centre of the car. The Kenwood sound system was equipped with the KDC C600 12-CD changer, which could be operated even at a lateral acceleration of 1.5 G. If only two people were in the car, luggage could be stowed in one of the seats in a special container. It had air conditioning, electric windows, computer, anti-UV rays and heated windscreen...

Being a car with so much electronics, an ad hoc diagnostic and maintenance system was designed based on Compaq laptops with Pentium processors that are still in use (as we saw in a previous article). To facilitate diagnostics, the car has a standard telephone jack (RJ-11) with modem to communicate with the engineers in Woking so they can find out what's wrong (or if everything is OK).

The younger ones of you are wondering what a modem is, well, digital communication over a conventional phone line. It was as cutting edge at the time as the Tesla Model S with remote update (via Internet) that exist today. In 1992 the WWW was not yet born, it was a pioneer.


64 units of the car were produced, plus five prototypes. Later, fatter versions appeared, a total of 106 cars, but that's another story. Today it is still a highly prized car, far from the reach of a "lower class" millionaire and tremendously collectible. Some of us are satisfied with tasting it in Need For Speed in its first versions, such as High Stakes or Road Challenge. Unforgettable. Driving one of these cars would be a good last wish, don't you think?