Citroën unveils the CXPERIENCE CONCEPT ahead of Paris

I still haven't decided if I like it or not, although I must admit that when I saw the first picture, it seemed a nonsense. Despite this, and as a fan of design, I told myself that before making a judgment, I had to spend a little time, and at least make an effort to understand it.

If you've come this far, it's because you're curious, so I invite you to keep reading, let's analyze together this peculiar concept car. 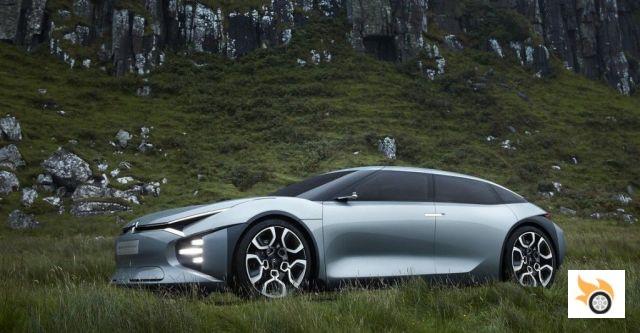 What does the CXPERIENCE pretend to be?

Once the visual shock is over, the first thing that has caught my attention are the proportions and silhouette, and is that a luxury sedan with three meters wheelbase, two meters wide, only 1.37 m high, and a two-volume silhouette, is -to say the least- atypical. Of course a hypothetical production version, -with more logical proportions- would lose visual drama, but I think Citroen would know how to honor its fabulous grandfather the CX. It measures 4.85 metres in length.

Sedans in this two-volume segment are rare, but I've always liked that Citroen stayed true to the philosophy started with the incredible DS, and its successors CX, SM and C6. Hopefully this prototype foreshadows a worthy successor to this unconventional saga.

Probably, customers who so far have chosen any of the different generations of Citroen luxury sedans are the type of person who likes to go out of the conventional, at least, is what Citroen must think to design a car like the CXPERIENCE, with a visual and chromatic language shocking, at least, for what it is stilled in its segment.


Well, I like to think that the CXPERIENCE intends to test the market, and announce the future flagship of Citroen, and does so by taking to the extreme its proportions and future visual language, and is that in Citroen know that we will need time to go understanding it ... 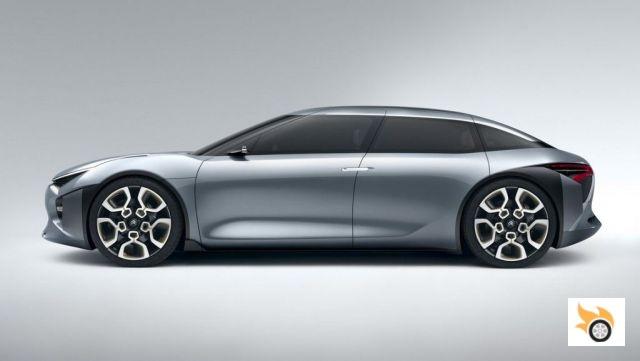 What does its silhouette tell us?

A huge wheelbase with short overhangs, a very long roof, the silhouette of two volumes, and the large glazed area, make it clear that the goal is to prioritize the interior space of its only two rows of seats: the real luxury is to travel comfortably, and this car is for people who prioritize living well and their own happiness, on the image we project to others.

The car is very low and wide, suggesting aerodynamics, speed and grip: dynamic and fast. 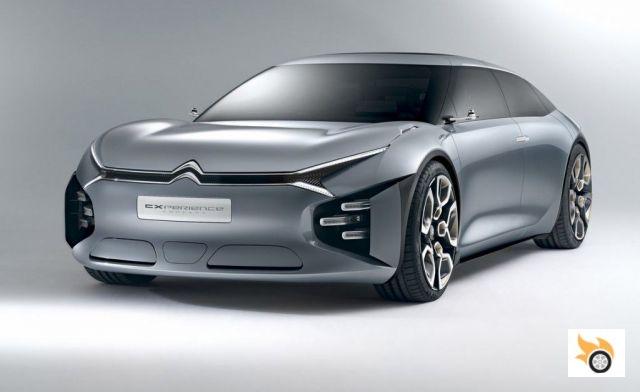 And its front end?

The main light clusters give way to the daytime running lights, which now represent the look of the car. The expression next to the narrow front grille is very defiant and really new, also increasing the impression of width. The shapes of this area are not only drawn on the surface, but are sculpted, increasing the visual effect and drama.

On the other hand, the position of the main optical groups, which are inserted in a strange side air intakes is out of the ordinary, and separate them into three optical elements on each side, makes them no longer perceived as the "eyes" of the car. This area, with a mobile aerodynamic elements speaks of aerodynamics and functionality in equal parts. Some will be reminded of the machine guns of the 007 car, and of course, is one of the most daring motifs that bring more visual aggressiveness to the concept car.


I especially like the shape of the front apron, with its lower grilles with lids, which -I imagine- open according to the cooling needs.

I won't leave the front end without forgetting the air vents on the wings. Porsche introduced some grilles in its GT3 to reduce the front axle lift (caused by the overpressure in the wheel arches) and here. Citroen offers us a different solution that is an interesting solution of continuity between the front wings (higher) and the beltline.

Let's look at the rear

The impossible concave rear window in two planes pays homage to its grandfather the CX and shows us that the desirable standard version would not be satisfied with a boring rear window. I also find interesting the inclination of the rear pillars, almost break, which again tell us that the interior habitability is a priority.

As if the rear was unconventional, the elaborately designed taillights add visual luxury. And the moving rear wings, (aerodynamic efficiency again) somehow repeat the language of the front. 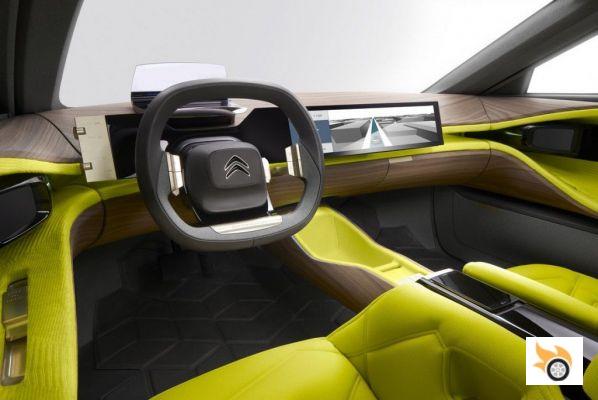 The first thing that catches the eye in the interior is its impossible yellow, a choice that reminds us again that this car is not aimed at the usual and conservative customer of luxury sedans.

Here the distinction does not come from the hand of chrome, glitter and ostentatious shapes, it comes in the form of curves, materials and welcoming shapes, suggesting a relaxed comfort, no ostentation but luxury and comfort. All the shapes describe curved surfaces that run through the interior without abruptness. Just look at the seats, with their inviting side skirts, or the shapes of the elegant wood that surrounds us, as if we were in the living room of our modern design house, with large windows overlooking a beautiful landscape... 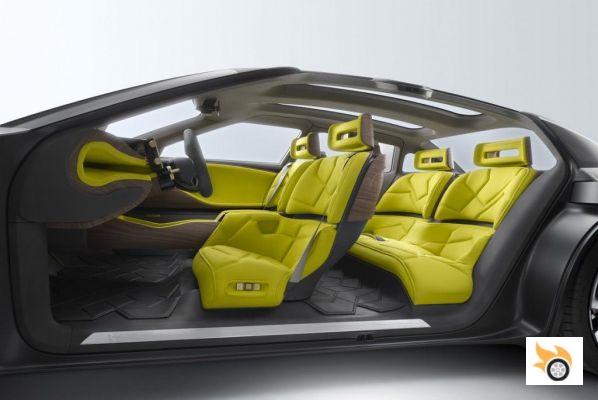 At first glance, it doesn't seem too revolutionary. The CXPERIENCE is a plug-in hybrid with a 150/200 hp front combustion engine, supported by a 107 hp electric motor driving the rear, and with an emission-free range of 60 km... But perhaps this mechanical realism is the key to suspecting that underneath this CXPERIENCE is Citroen's next flagship... Or so I hope!