At that time, the managers of Citroën, which was also owned by French Michelin, already had in mind the development of a small car but markedly practical and urban character that would not compete with the aforementioned Citroën 2CV and Dyane, but the economic situation of Citroën was not the most appropriate to start projects of dubious profitability, especially if we consider that the few assets of the brand had been invested in the development of the Citroën GS, presented in 1970.

The injection of capital needed to start developing a new product came in 1968 when the Italian Fiat group took over 49% of Michelin and the joint venture ParDevi was created. From this agreement, a new vehicle on the Fiat 127 chassis began to be developed, but the Franco-Italian negotiations went nowhere and in 1973 Fiat sold its stake back to Michelin, leaving Citroën in a very precarious financial situation that would force it to reconsider even the launch of the Citroën CX, which was almost at the launch stage.

Little money and a lot of ingenuity

In such an economic situation and after several failed "marriages", Citroën's future was so dark that it was approaching dissolution, something that the Elysée, then ruled by Georges Pompidou, would not allow; in fact, it was the French government itself who "invited" Peugeot to buy 38.2% of Citroën's shares. The problem was that Peugeot's accounts at the beginning of the 1970s were not particularly healthy and, in such a situation, the chances of developing a new car, starting from scratch and without cancelling the Citroën CX project, were totally nil.

With such bleak premises, the cheapest way to create a new car was to do nothing new at all. So how do you do that? To develop the new Citroën, the three-door Peugeot 104 was cloned and fitted with newly designed front and rear light clusters.


A Citroën counterpart to the five-door Peugeot 104 was never planned... or was it? It will interest you to know that the five-door version of the Peugeot 104 was 30 centimetres longer than the three-door model and served as the basis for the development of the Citroën Visa. To avoid cannibalization between the Peugeot 104 and the new Citroën, there was another very important detail that would differentiate the two models for years to come. While the Peugeot used engines developed jointly with Renault, the Citroën would use the same engines as the 2CV.

As a curiosity completely unrelated to this article, I let you know that a Citroën was manufactured with the chassis of the Fiat 127. It was called Olcit Club, was produced in Romania and had the body of the Citroën Visa and Citroën GS engines.

The new Citroën, the Citroën GS.

The new Citroën, the first to be developed under the Peugeot umbrella, was presented at the 1976 Paris Motor Show under the name Citroën LN. Its relationship with the three-door Peugeot 104 was more than obvious and no attempt was ever made to disguise it. In fact, aesthetically, only the optical groups inspired by those of the Mehari or Dyane models differentiated the Peugeot 104 Citroën LN. Of course there were also more details but of lesser importance and always in ornamental aspects (upholstery, colors ...).

On the mechanical side, as required by Peugeot, the Citroën LN mounted the same 602 cc engine as the 2CV, but equipped with electronic starter and slightly tweaked to reach 32 horsepower, fourteen horses less than the most economical three-door Peugeot 104, the 104 ZL.

When the Citroën LN went on sale a few months after its introduction, it did so in a single engine and equipment configuration and its reception was rather timid and polarized between those who were alarmed at having crossed Peugeot with Citroën and those who valued the product as something new, modern and really economical both in terms of purchase and maintenance. It was precisely the economic aspect of the vehicle that was most wanted to exploit to reach a wider audience.

In fact, in 1977 the Enterprise commercial model was even launched without a rear seat and, in some markets, even without a passenger seat, i.e. with just the driver's seat. At the end of 1978, the LNA model was launched with an improved interior and a modified engine of 652 cc and 35 hp in order to reach a public that found the basic LN model too austere. In fact, in large French cities it was easier to see a Peugeot 104 than a Citroën LN despite its more advantageous price.

Despite the launch of this new version, sales of this car did not take off for several reasons. The fundamental and most important was that this car was seen as a "cheap" version of the Peugeot 104 and in France, even today, Peugeot lives in the hearts of many French people who respect and value it, always leaving aside the French political interventionism in the automotive sector. On the other hand, this car lacked the personality required of a vehicle to be able to target a specific segment of the population. Finally, its engine range was the most limited and modest of all the possible European competition. 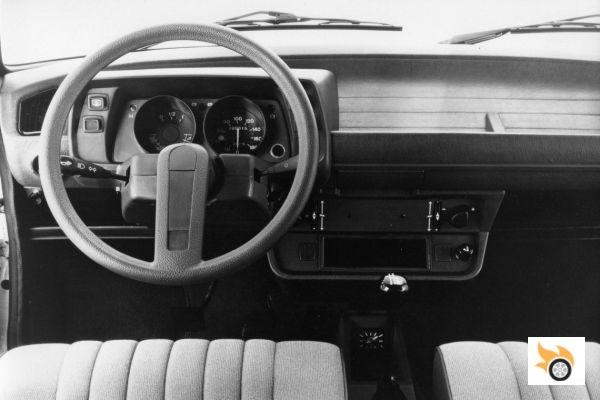 Despite this and the delicate economic situation of both brands, Citroën remained committed to its urban vehicle, but limited its range to a single version, the LNA, which the anti-pollution regulations left its power at 34 hp. In 1981, the Citroën LNA was slightly updated with some functional improvements such as an interior rear-view mirror with day/night function, a larger radiator and a heated rear window. In addition, a new Club model appeared whose only improvement over the basic model was the pre-installation for radio equipment and the corresponding logo on the tailgate.

In 1982, the Citroën LNA range was modified and there was a small increase in sales, but this was due to a new organisation within Peugeot. On the one hand, the Talbot Samba was launched, another clone of the Peugeot 104 three-door and Citroën LNA, but very focused on a young audience. On the other hand, Peugeot itself wanted to ensure the European success of the imminent 205 gradually limiting the range of 104 to the most austere versions and marketing it exclusively in the French market. Finally, after six years on the market, four-cylinder engines were finally introduced on the Citroën bonnet.

With these modifications and with a higher sales forecast, the Citroën LNA began to be sold in a larger number of markets, including Spain, where it was offered at a very advantageous price thanks to its manufacture in the factory in Villaverde (Madrid). However, at European level, the expected increase in sales was taken by the Talbot Samba, for its youthful presentation, for its greater mechanical offer and also offered with an attractive convertible body offered at a very interesting price.

In any case, from this moment on, the Citroën LNA enjoyed a very quiet last few commercial years, with no major changes in the mechanics or equipment available and with acceptable sales thanks to a sales policy based on "special" series offered at a very good price and whose only differentiation on the basic models was the ornamentation. 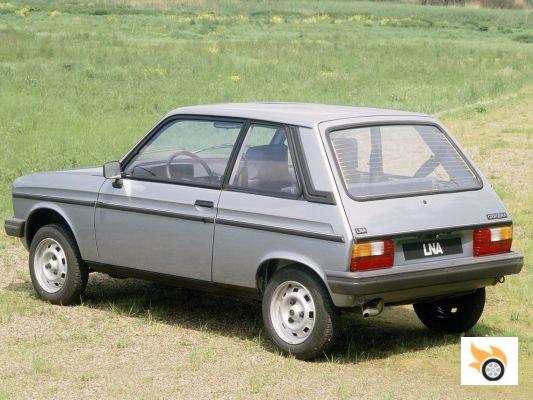 Finally, the Citroën LNA was replaced in 1986 by the Citroën AX. Of the other members of the family, the Talbot Samba ceased production the same year due to the disappearance of the brand and only the Peugeot 104 survived until 1988, after almost 20 years on the market and three years before the appearance of its replacement, the Peugeot 106, which was made on a Citroën base: just the opposite of what had happened fifteen years earlier.