Hap Sharp and Jim Hall were two former F1 drivers who sought to combine their knowledge of racing and race engineering to develop single-seaters capable of winning championships in both the United States and Europe.

After developing up to 8 different models, the goal for Chaparral in 1970 was to win the Canadian-American Challenge Cup (CanAm), a championship contested between Canada and the United States in the 1960s and 1970s. After the failure of the Chaparral 2G in 1967 and the 2H in '69, mainly due to reliability problems, Chaparral brought out the 2J model, with which Sharp and Hill sought to take full advantage of the ground effect. The result left all their competition speechless.

The Canadian-American Challenge Cup was disputed between Canada and the United States, and prototypes with engines of any displacement, ground effect, free aerodynamics and exotic materials were allowed to be used.

The 2J was a single-seater with a shape never seen before, a box with wheels, a brick with a Chevrolet V8 in the back. Unlike its predecessors, the 2J had no spoilers, no aerodynamic attachments, no complex shapes. The sloping front end and two small rear spoilers were the only aerodynamic elements of the 2J, in addition to the rear wheel fairing.

This new Chaparral had side strips - made from a polycarbonate resin - on the lower part of the chassis, which together with the rear suspension elements allowed the single-seater to always be only a few millimetres off the ground, despite lateral forces or irregularities in the road surface. This sealed the bottom of the car against the asphalt and channelled the air coming in through the front of the car to the rear, where the real secret of the 2J was to be found.

This was none other than two fans from a tank driven by a Rockwell twin-cylinder 274 CC engine from a snowmobile. In this way, the suction force of the fans sucked in all the air entering the front of the 2J, creating a vacuum zone at the rear axle that generated a downforce of over 1 G. This idea may seem rather strange, but Red Bull used a similar system in their RB7. The energy drink brand's principle was the same as Jim Hall's: to create an airflow over the bottom of the car that causes a depression at the rear of the car that sticks the rear axle to the tarmac, improving traction and cornering.

Hall devised a system that created suction on the rear axle, literally gluing the 2J to the asphalt.

With these elements, Chaparral's new model didn't lose downforce at low speeds, or in sharp corners, or even in crosswinds, situations that are still a headache for engineers and designers today. 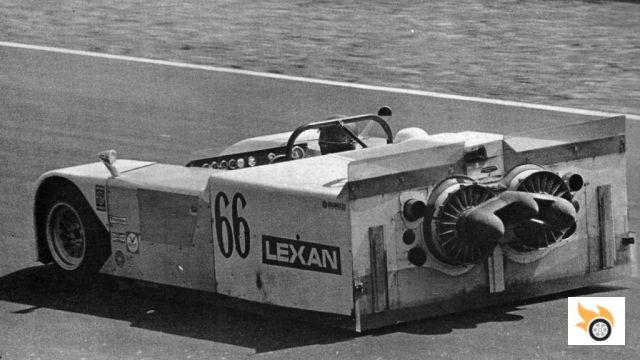 Chaparral didn't neglect the mechanical side of its creations either. The 2J was powered by a powerful Chevrolet V8 7620 CC engine that developed a not inconsiderable 760 hp, linked directly to an automatic gearbox developed by Chaparral. In addition, the torque figures developed by this V8 -about 800 Nm- together with the suction effect of the fans made the single-seater practically unbeatable in acceleration phases at the exit of the tightest turns. The chassis was made of aluminum, and the body panels were made entirely of carbon fiber, which allowed the new 2J to have an unladen weight of about 820 kg.


Jim Hall's theory came to life with the new 2J, now Chaparral had to test their new developments on the track. After many delays in its development, the so-called "sucker car" debuted in the third race of the 1970 CanAm Championship, held at Watkins Glen, New York. Despite not being completely ready, Hall put his creation on track, hiring for the occasion a certain Jackie Stewart, who got a third place for the 2J in its first qualifying session, giving hope to the American team and generating a lot of expectation among its rivals. But in the race, Chaparral's reliability played a dirty trick again, and after setting the fastest lap of the race, the 2J had to retire due to brake problems.

The Chaparral team decided to continue with the development of their car, missing the next three CanAm races and returning at the Road Atlanta race, with the "sucker car" at the controls of Vic Effors, who would remain at the wheel of the Chaparral car for the next three races. The white car took the pole position by a wide margin over the second placed McLaren of Denny Hulme. In the race, the 2J had reliability problems again, this time with the rear fans, and after several pit stops, it managed to finish sixth. 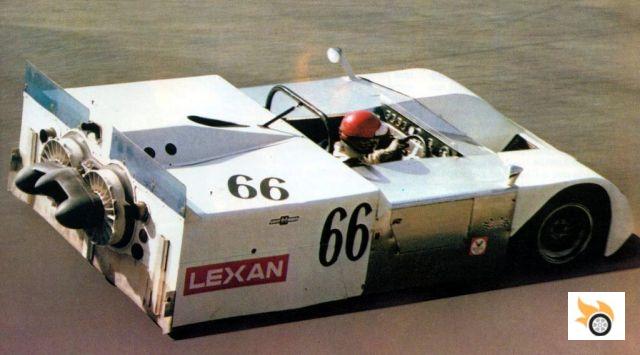 His rivals, with McLaren in the lead, began to complain about the presence of the fans in the 2J, as they were considered aerodynamic mobile elements.

But the problems for Jim Hall's team were just beginning. The rest of the championship teams began to issue complaints and protests against Chaparral's system, claiming that they were mobile aerodynamic elements - forbidden at the time. In the final race of the 1970 championship, the 2J was banned, but Hall fought until the last moment to convince the stewards that his suction system was legal. Finally, the 2J was on the grid for the final race, taking pole position with a 2.2 second lead, but once again, Efford was forced to retire after losing control of the car when the fan motor failed in a fast corner.

Hall, tired of fighting to defend his creation before the authorities, withdrew his team from competition until the end of the 70's, when Chaparral returned to competition in the Indy 500, where he won with the 2K, with Johnny Rutherford at the wheel. But that's another story...