Two were the main criticisms that the X6 received from its clientele. The first is that they wanted a 5-seater car and although the central rear seat was symbolic, not to say useless, they wanted one. (Let's remember that in its beginnings the X6 was exclusively a 4-seater). The second criticism was more of a wish, the X6 was seen by many as too big for the European market. BMW listened to its clientele and in 2014 launched the X4.

The recipe is the same as for the X6: an SUV with fastback line, which BMW insist on calling coupe, but with dimensions more in line with our streets and with 5 theoretical seats. This time we test the X4 in its most powerful version, the xDrive35i equipped with 6-cylinder in line and twin-turbo 306 hp without M package. 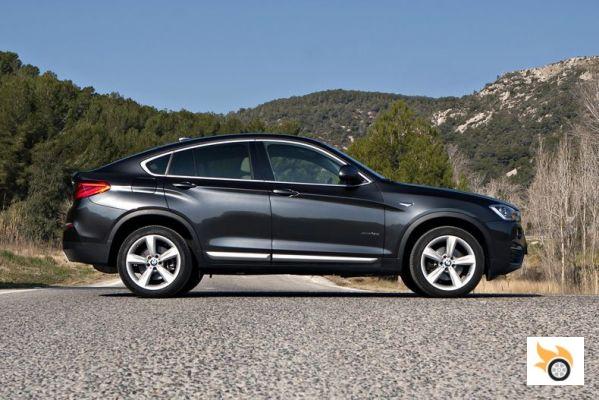 The BMW X range continues to grow. With the arrival of the X4 last year, there are already five models that make up the SUV range for BMW. In itself, the X4 is no revolution, but thanks to its design can seduce a clientele in search of originality and to which traditional SUVs do not convince. It is also true that its design will not appeal to everyone. Those who saw in the X6 an excessively flashy car, will see that the X4 is somewhat more discreet.

It obviously retains the design cues that created the X6, namely a roofline that slopes gently down to create a fastback profile. Compared to its big brother, the X4 looks more balanced thanks to a rear end that's almost on the same plane as the bonnet: it's raised just enough to give a certain dynamism to the line. 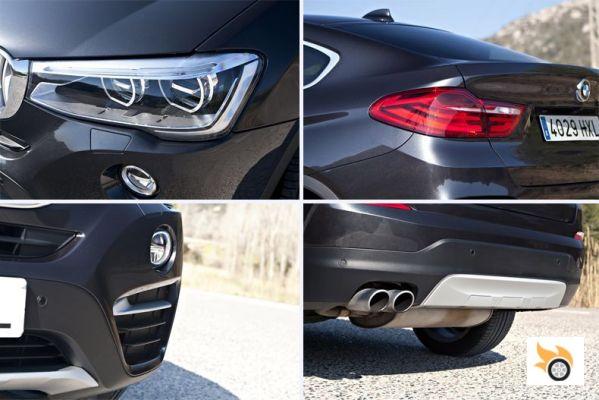 Otherwise, the rear lights are reminiscent of those on the 4 Series, while the front end is as aggressive as on any other BMW and the sculpted flanks give it a visual muscularity: the brand's aesthetic codes are respected to the letter. Our unit lacks the M package, so the front end doesn't look as massive to us as it does with the M aesthetic package and its large front air intakes. On the other hand, I can't fail to mention the overly exposed exhaust silencer, both to stares and rocks if you happen to venture off the tarmac.

14 mm longer and 37 mm lower than the X3 it is based on, the X4 also has a much more expressive design and a much sportier silhouette. In fact, in terms of styling, the X3 looks like it belongs to the previous generation. And in a way it does, which is even more noticeable when you climb aboard. 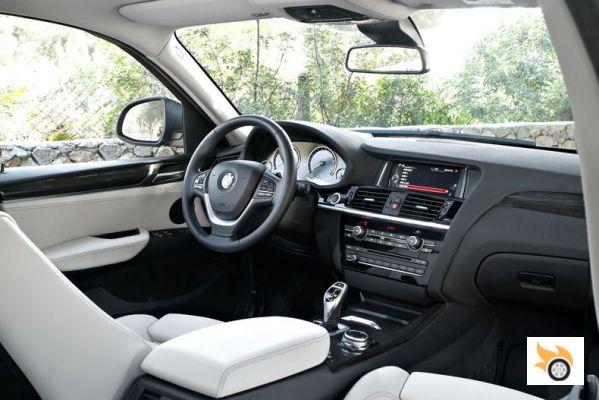 The dashboard is the same as in the X3. The quality of assembly and most of the materials used is still of high quality, but compared to the design of more recent productions, it's starting to age a bit. This is particularly glaring in the integration of the infotainment system screen and the softness of the dashboard plastic. While I find the softness of the more recent productions better, I still prefer the screen integration of the earlier productions, such as the X3, to the more recent ones. Mostly because in the X3 and X4 the screen is effectively integrated, as opposed to the current trend of putting a screen as if it were an iPad glued to the dashboard. I also recognize that this last point is a purely subjective consideration.


Logically, in terms of livability, you have to be willing to make certain concessions if you buy an X4. By losing the vertical hatch, the boot volume loses 50 litres compared to the X3. Still, 500 litres of boot space is a good value and puts it in the range of some family break-outs. Like the X3, the X4 has an electric tailgate and, as an option, the tailgate can be opened by sliding your foot under the bumper (handy if you have your hands full). 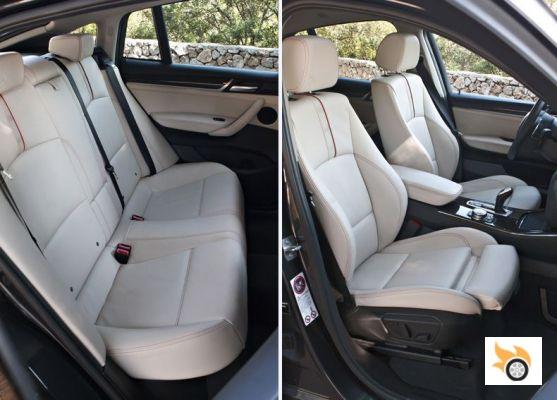 The X4's roominess is almost identical to that of the X3, although in terms of height and boot space there are compromises to be made.

Due to the sloping roofline, rear visibility through the rear window is reduced. Honestly, it's not too much of a problem either. That's what the two exterior mirrors are there for on the road, and when it comes to parking, the rear view camera (497 euros) offers infinitely better visibility than a simple interior mirror. If the X4's dimensions are still too much for you, the optional Surround View cameras (£877) make it so easy to park in the tightest of parking spaces as if you were driving a Toyota Aygo. What did strike me, however, is the absence of roof-mounted grab handles for passengers. Personally, I've never used them, but there are many people who do and in a sporty car like this it's strange that it doesn't have them.

Apart from the absence of grab handles, which many people won't care about, the passengers have a spacious cabin. In the back, legroom is identical to that of the X3, proof that it's not bad at all. Similarly, two adults up to 1.90 m will be able to travel in the back without touching the roof too much. To achieve this, BMW had to position the seats lower - they're deeper than in the X3 - but in return you'll have slightly higher knees. It's not like you'll be sitting with your chin resting on your knees either, but on long journeys I'm not sure that's the most comfortable way to travel. Finally, I would like to mention that I found the access to the rear seats noticeably less comfortable than in the X3.


The more sunken shape of the two rear seats means that the central seat, although it exists, is merely symbolic. No one in their right mind can make you travel for more than 15 minutes sitting on an elongated 20cm wide cushion with no legroom thanks to the rear centre console. It's true that at least it's there for the occasional occasion. 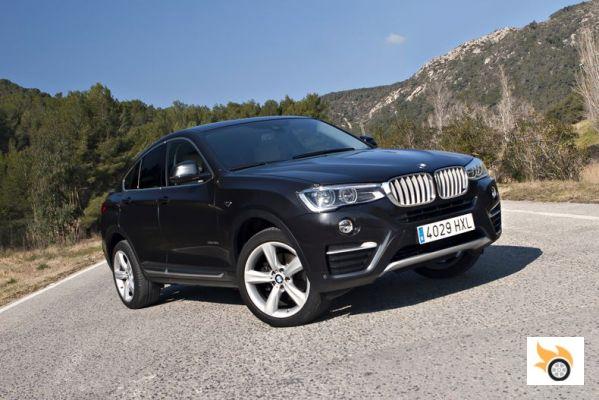 The BMW X4 range recovers part of the engines of the X3, with the exception of the sDrive18d 150 hp and that in the X3 is associated with rear-wheel drive. The X4 range is only available with the excellent all-wheel drive BMW X-Drive and automatic transmission ZF 8-speed (only the X4 xDrive 20d can equip manual transmission 6-speed). With this clear positioning in range superior to the X3, we tested its most powerful version and that crowns the range, the X4 xDrive35i.

The engine is already an old acquaintance, it is the same engine that works wonders, for example, in the 435i or the M235i. It's a turbocharged inline 6-cylinder with twin-scroll turbocharger and direct injection, as well as variable valve timing and lift. In other words, all the best and quintessential BMW motoring. In the X4 it puts out 306 hp at 5,800 rpm and delivers 400 Nm from 1,200 to 5,000 rpm.

Obviously, with this engine, straights are a formality. You barely realise they exist between corners and you arrive at the next bend at a speed that is clearly unreasonable for any SUV, except the X4. It's true that with a Porsche Macan you can go even faster, thanks to its torque distribution that favours agility (70% at the rear) and a somewhat playful rear end. Porsche Macan aside, the X4 is the dynamic benchmark for SUVs. 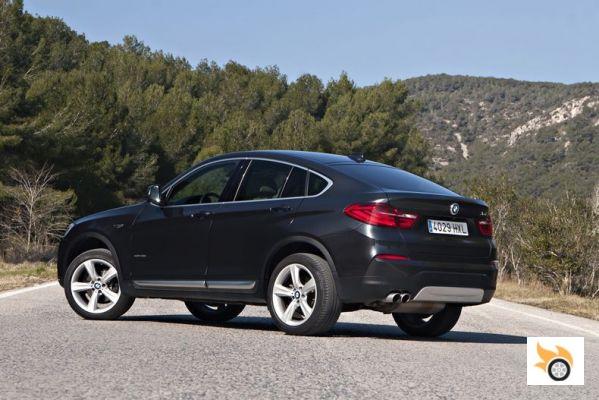 The X4 postpones the laws of physics, but it can't skip them.

The front end is truly efficient, with direct and precise steering that manages to tell us enough about where the wheels are and what's happening to them. Obviously, even with a firmer set-up than in the X3 (BMW says it would be in the order of 7%) and a 36mm lower ride height, the X4 postpones the laws of physics, but it can't jump over them. In case of arriving at a curve with too much optimism, the X4 will tend to pull straight, sinking the nose and lengthening the trajectory. It was to be expected, between the 1,900 kg that the car weighs - with the inertia that implies - and BMW's conservative tuning, the X4 is not as agile as a 435i would be. Another downside, the automatic gearbox doesn't downshift early enough under hard braking and does it late, i.e. when we come out of the corner. Going up a mountain pass isn't as much of a problem as going downhill, where you'd like to have more engine braking.

This slowness of the gearbox is also more noticeable because of the car's high weight. However, it's something that isn't noticeable in the performance. 0 to 100 km/h in 5.5 seconds and 80 to 120 km/h in 4.6 seconds (Sport mode and S gearbox) are really good values, especially for an SUV of almost 2 tons. Where I was disappointed is in the sensations section. The car accelerates really hard, but at the wheel it doesn't feel like it. And the fact that the sound of the engine is anything but, doesn't help. That the 428i's four-cylinder sounds better than the X4's inline-six isn't something you'd expect from BMW... 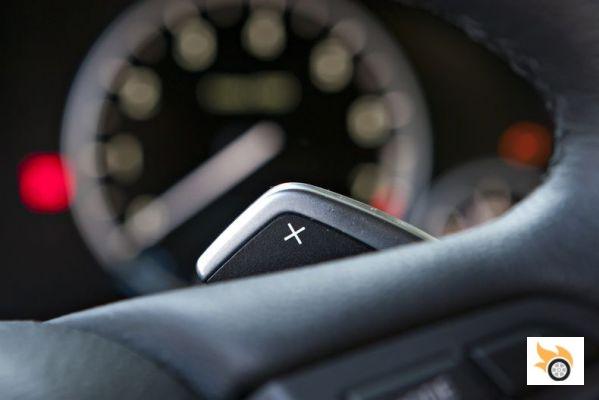 While the X4 doesn't come across as nimble or quick as other models from the brand, it's still one of the most dynamic SUVs on the market with which to have a pleasant time behind the wheel. By the way, I didn't find the driving position to be perfect, as in other BMWs. The front seats are 2 cm lower than in the X3, but the dashboard - of the X3, remember - is at the same height, for someone who likes to drive very low, like me, it wasn't quite practical. It's not that it was uncomfortable, but I couldn't find the exact point in the height of the steering wheel to make it feel 100% comfortable and not 98%.

To continue with the criticisms section, I was negatively surprised by the sound insulation. At least the one in this unit. Let me explain. Overall, I wouldn't have any objections to the X4's soundproofing if it weren't for the presence of the sunroof. With the roof closed, above 100-110 km/h, the aerodynamic noise coming from the roof is such that it makes you check again and again that it's closed. And yes, it is closed. Then you pull back the curtain - you never know - and the noise becomes less present. But it doesn't disappear. It's a pity because the rolling noise is quite well attenuated as well as the air noise that may come from the rear-view mirrors. Since I wasn't able to test another X4 with a sunroof (it's the only one they had on hand), I can't confirm or disprove that this is an isolated phenomenon. 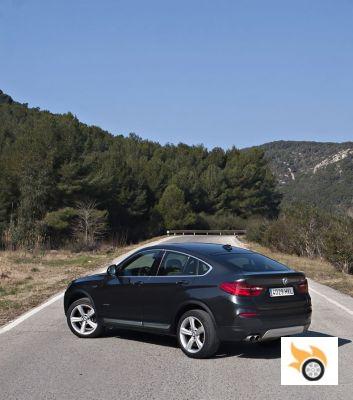 If we look at the BMW X4 for what it really is, namely an original SUV and a unique alternative to traditional breaks and SUVs, then it shines in the firmament by offering unusual agility for an SUV, while preserving passenger comfort. Unique in its kind, dynamic and with relatively low fuel consumption for its weight (10.5 l/100 km at normal speed), the X4 has all the winning cards to be a commercial success.