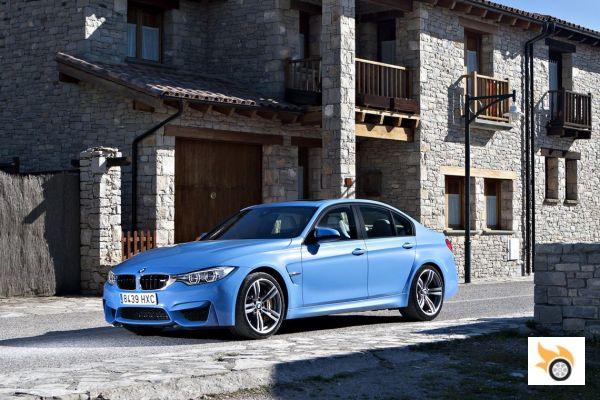 Last year I had the opportunity to test the BMW M4 at the Jerez circuit (one of these days we will rescue the Autoblog test for Pistonudos); more than 6 hours on track in total is a lot. BMW even put at our disposal the M235i and the M3. On the track, M4 and M3 were superb. You can go very fast, but very fast, enjoying as never before at the wheel; even as standard it's almost an ideal car for track days. Now it's time to see what the M3 is like on a track day and on a cornering track, because there aren't track days every day... And because, after all, it's a saloon, with its 5 seats and 480 litres of boot space.

The M3 exhales brutality from all four sides; its presence on the road is imposing.

The first sensation is essentially visual. And I'm not just saying that because of the Yas Marina blue colour of this car, the M3 is visually much more imposing than the M4. The front wings are flared in the same way as the M4, they even retain the air extractors in the front wings, but at the rear the flaring is much more brutal. It's not that the M3 has a wider rear track than the M4 (1,603 mm both), it's just that the designers couldn't hide that width smoothly and elegantly like on the coupe. Personally, I think it's better this way, as it reminds me of the same beastliness that the 3.0 CSL and M3 E30 advertised back in the day with their pronounced fins. Where the M4 looks aggressive yet elegant, the M3 exhales brutality from all four sides; its road presence is imposing.


Otherwise it retains a front bumper with somewhat tortured lines. The lower bumper whiskers, can be in carbon fiber thanks to BMW M accessories, giving it a cleaner and even more intimidating look, but this unit did not have them. At the rear, the twin tailpipes remind us that we are in the presence of a real M. 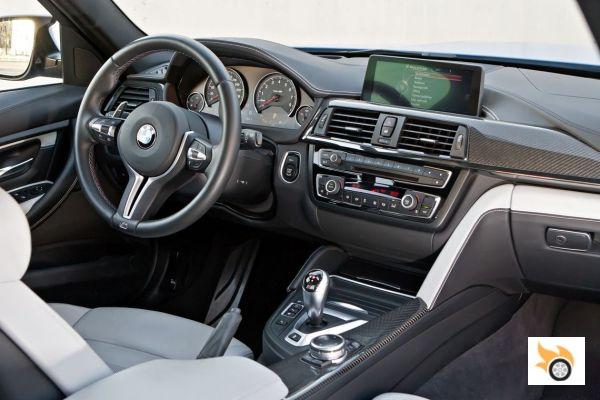 On board, the basics remain the same. The bucket seats, with a design that combines elegance and sportiness, are very supportive. And it's easy to find the ideal driving position. By the way, the seats can be optionally ventilated, as in the test unit.

The dashboard is an old familiar feature of the 3 Series. The DKG gear knob with M logo, the M steering wheel with paddle shifters and the buttons for adjusting the steering, suspension, engine and gearbox are the main differences compared to a 335i, for example. The presentation quality, with the carbon fibre and extended leather with contrast stitching, is simply superb. In this respect, it's almost on a par with the Audi RS and Mercedes AMG.

Quality of presentation and finish, near-perfect bucket seats, leather and carbon fibre in abundance: the interior is superb.

In terms of roominess, there's nothing new. The M3 is almost identical to the 3 Series. And I say almost because the standard bucket seats are near perfection: they're supportive and ultra-comfortable. After trying these seats, any other seat will seem like little more than a bar stool. Needless to say, the driving position is excellent, the multiple adjustments of both the seat and the steering wheel allow you to find the ideal position. In the back, the 2 passengers will travel comfortably with more legroom than in an Audi A4, but slightly less than in a Mercedes C-Class. I do not mention a third passenger in the rear seats because it has a space of just 20 cm to sit and the transmission tunnel in the middle that makes you do not know where to put your legs.

The main new features of this new M3 with respect to the E90 focus on the engine and weight reduction. As you may already know, for this new generation, BMW decided to ditch the 4.0-liter naturally aspirated V8 in favor of a 3.0-liter inline 6-cylinder and supercharged by 2 turbos (each one is in charge of 3 cylinders). The result: 431 bhp (144 bhp/litre) and a gross output of 550 Nm (i.e. 150 Nm more than on the E90) available from 1,850 rpm to 5,500 rpm. In addition, the presentation of the block in the engine bay is also improved over the E90. There are fewer plastics and a mind-boggling, by peculiar, carbon fiber upper reinforcement bar. 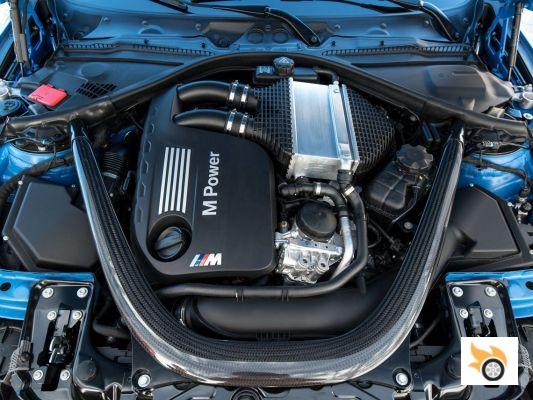 BMW M also worked to reduce the overall weight. In the end, with a lighter engine, the use of aluminum for the hood and front wings, as well as a carbon fiber roof (optional), the M3 F80 weighs about 80 kg less than the E90. Of course, when you combine high power and low weight (with a power-to-weight ratio of 3.47 kg/hp), you get a performance to die for. With the DKG gearbox, which the vast majority of customers prefer, it does 0-60 mph in 4.1 seconds and 0-200 mph in 13.4 seconds. Even more impressive, it does the 1,000 m in around 22 seconds and does 80 to 120 km/h in 3.5 seconds. It's simply mind-blowing, we're talking about a level of performance worthy of a Porsche 911 in a saloon! But enough about figures, let's talk about sensations and behaviour.

Press the start button and the 6-cylinder wakes up with a metallic sound. How to describe it? Impossible, it doesn't sound familiar. It sounds "fat", yes, but it doesn't have the musicality of a naturally aspirated inline-six or the low rhythm of an AMG V8. That feeling gets better as we pick up the pace: the exhausts backfire, roar and completely hide the turbo's blowing. Still, the M3 is more exuberant for the audience than for the driver. Still, I have to admit that it doesn't sound as good as the M3 E46 and the V8 of the M3 E90 did. Without a doubt this is the only aspect of the M3 that hasn't improved over time. 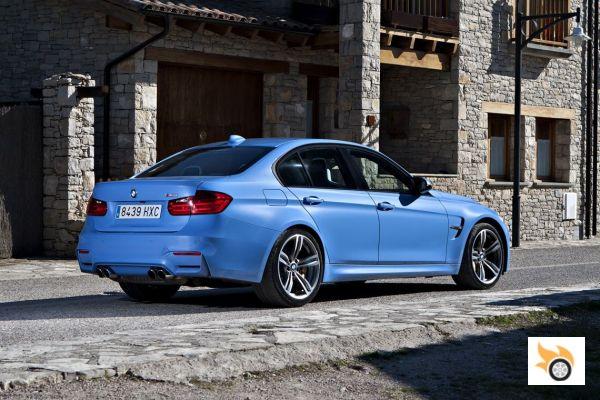 After the first few stints it's clear that those who bemoan the presence of turbos in the BMW 6-cylinder haven't tried this M3. The engine responds to the slightest request of the accelerator, boasts a bestial reactivity. No one would say that this is a turbo engine, the throttle response is immediate. And its throttle sensitivity is such that a simple half-millimetre flex of your right foot can send an avalanche of torque to the rear wheels. Without the help of traction control, on corner exit, you'll get a rear end that wants to overtake you without having provoked it. In this sense, it's as if the engine is directly linked to your brain.

The engine has a beastly reactivity, it's as if it's directly linked to your brain.

That's 550 Nm available from less than 1,000 revs above idle to almost 6,000 revs. That reactivity is even more eloquent with the dual-clutch gearbox. That said, don't get the impression that it revs hysterically like a "tight" 4-cylinder, on the contrary. It retains that endless stroke that allows you to climb up to 7,500 revs for the engine to express itself freely and give you goosebumps. In the end, the accelerations are brutal. And I'm not just saying that as a styling figure, they literally are. It's something the DKG gearbox contributes to in those situations: the kick-down, for example, is more like a kick in the ass. Just like it is every time you touch one of the paddles or the knob, when you want to be in control of the gears.

In between turns, you realize how the steering isn't as bad as some people make it out to be. It's electric, true, but it has a level of consistency and communication that I found to be better than in the E90. For it to be communicative steering, perhaps the M3-specific Michelin Pilot Super Sports tyres contribute to that. Be that as it may, the M3's steering is communicative enough that the driver feels confident with a front end that offers unparalleled grip. Add to this equation optional carboceramic brakes (9,002 euros), steering with near-instantaneous responsiveness and surgical precision, and there aren't many cars that can keep up with it on a twisty stretch, whether they're more powerful than the M3 or not. As long as the road is in good condition. 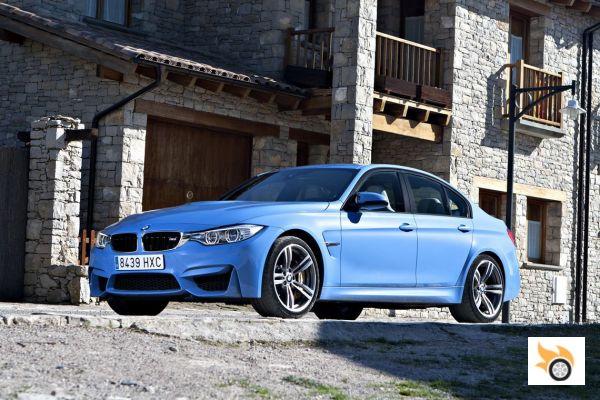 The only point on the M3 that could use a little more work is the firmness of the suspension. On the track you can set the hardest mode, nothing to complain about. On mountain roads, twisty and in bad or undulating conditions, it's a different matter. The rear wheels always end up bouncing causing small traction losses. And the self-locking rear differential can't do anything about that. To get the most out of it, you have to customize the car's settings: steering in Sport mode, throttle at maximum sensitivity, gearshift speed to suit the consumer and suspension in... comfort mode. Luckily, all these settings are accessible from the centre console - without going into the iDrive - and can be memorised on one of the M buttons on the steering wheel, so you can access "your set-up" whenever you want. 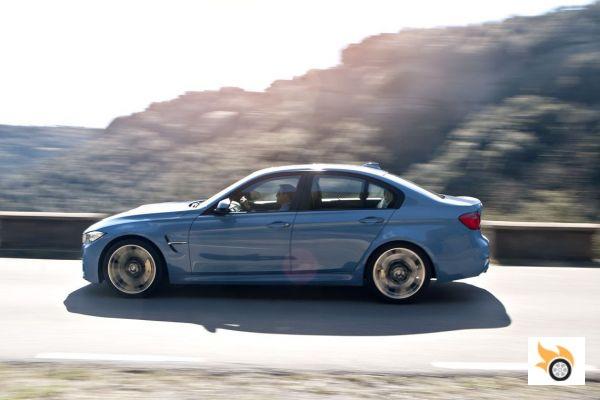 And on a day-to-day basis? In town, the gearbox can be a little jerky in its shifts, especially when cold, but then it's smooth again. It should be noted that the M3 is lower than the 3 Series and in some parking lots and speed bumps the car's belly can rub against the road surface. The consumption on the road, in normal driving, remains at reasonable levels. Not that it's a priority when you buy an M3, but you can now do between 320 and 360 km on a single tank of petrol. Even so, there are no miracles, in the test I didn't get less than 14 l/100km combining city and sporty driving. On the motorway, at 120-130 km/h, you can get down to 12 l/100 km. 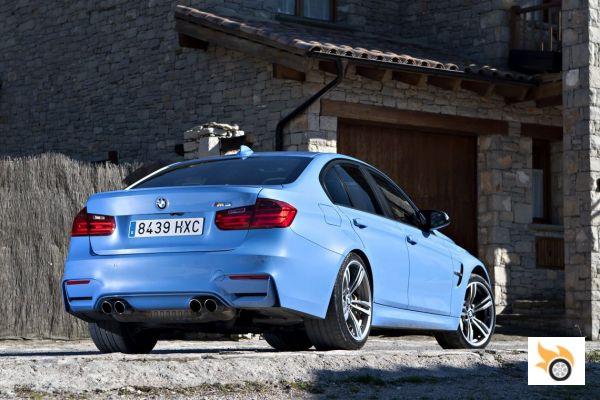