Where are hardtop convertibles going and where do they come from?

Would you like to review its history with me?

Ellerbeck, the grandfather of the Convertible Coupés

Although quite unknown, the prototypes designed and patented by Ben B. Ellerbeck in the early 1920s are probably the first CCs in history. Ellerbeck in the early 1920s are probably the first CC in history. It was at the first auto bodybuilders' exhibition held in 1922 in New York where good old Ellerbeck presented his Cavalier prototype. Strangely, and in spite of the interesting and advanced idea, neither Packard, nor Ford, nor any other big manufacturer showed interest in the idea. In spite of this, Ellerbeck continued to develop models and prototypes, perfecting the idea to a truly amazing level. Don't you find it incredible that - at a time when most cars were custom-built - the idea fell into oblivion?

If you want to know more about the history of Ellerbeck and its Coupés Cabrio, I recommend the interesting article by W.E. Gosden published in 1979, and recovered by Hemmings. 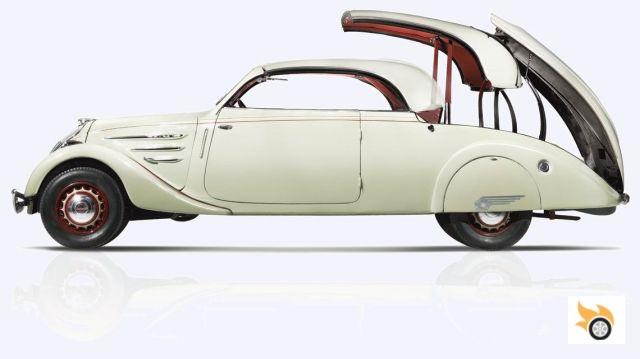 Peugeot 402 Eclipse, the first mass-produced one

Ten years later -in 1932-, Georges Paulin (a brilliant French dentist) patented a very similar system, and in collaboration with the Parisian Émile Darl'mat -Peugeot distributor- and the coachbuilder Marcel Pourtout, they first manufactured a few Peugeot 301, 401 and 601 with the roof system devised by Paulin, to later manufacture -already in series- 508 units of the famous Peugeot 402 Eclipse, to which we already dedicated an article. 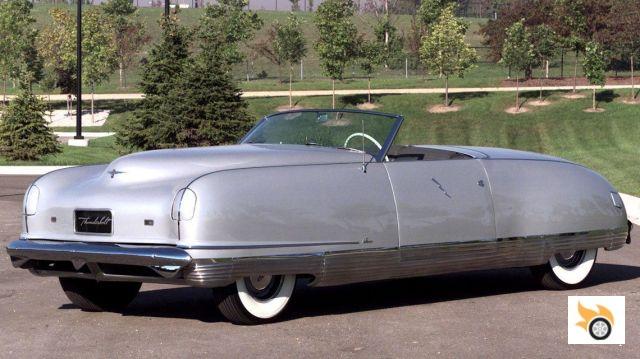 After the Second World War, Chrysler was the first to show interest in the idea again in 1941, proposing the futuristic Chrysler Thunderbolt, a very futuristic concept car with a very simple retractable roof. If you look at it objectively, it doesn't seem that Chrysler's engineers were too keen on the idea, as the two-seater needed a huge third volume to house its unsophisticated roof. Anyway, you have to recognize Chrysler's interest in recovering the idea, and I love its horizontal design, very personal and minimalist.

After investing a lot of money in the design and development of the Continental Mark II with retractable hardtop, Ford cancelled the project. But shortly thereafter, it made use of some of the investment and developed the Ford Fairlane Slyliner, a large hardtop convertible that appeared in 1957 and of which 48,395 units were produced. The Skyliner's roof system was truly spectacular and advanced for its time - a pity the same can't be said of its styling, which hasn't aged well at all. The spectacular convertible was discontinued only two years after its appearance, and it would be many years before another hard-top convertible was sold again... 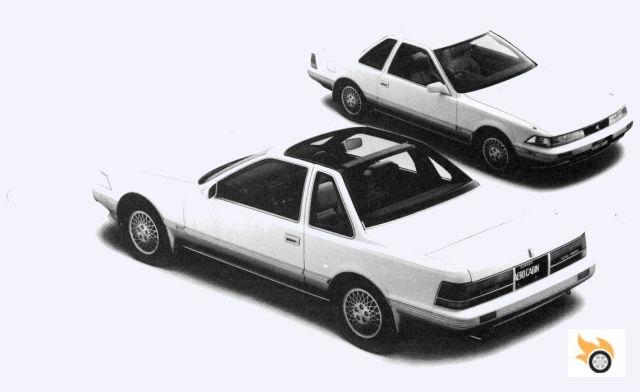 In 1989, 30 years after the Ford Skyliner ceased production, Toyota introduced the curious Soarer Aerocabin, a car halfway between a real convertible and a panoramic roof coupé, of which only 500 units were produced, and which timidly announced the return of the hard-top convertible... 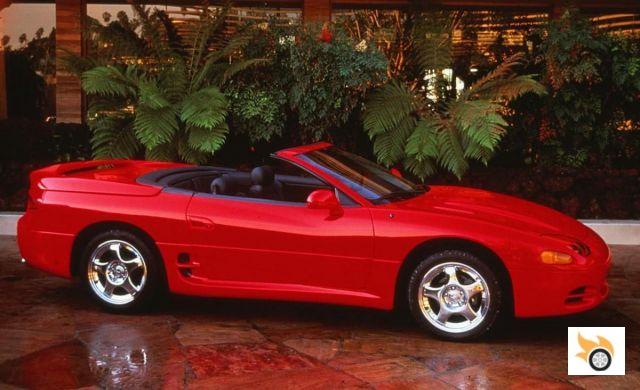 In 1995, and a year before the famous Mercedes SLK appeared, Mitsubishi collaborated with the American coachbuilder ASC to offer the GTO Spyder in the American market, of which 1,034 units were sold. It is a little known model, but well deserves the title of the first hardtop convertible -as God intended- of the modern era. 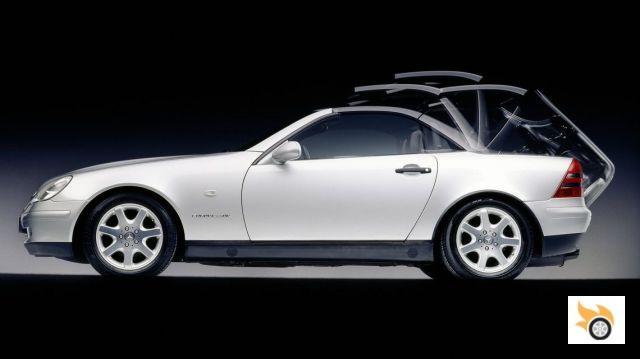 It was in 1996 when Mercedes surprised everyone with its SLK, a compact roadster and aimed at the middle class that would represent a commercial success. The key to the car and what made its success was its retractable hardtop. Unlike previous models, its silhouette was very compact, thanks to an ingenious roof that did not need too much space to retract, and that allowed a very graceful proportions, both with the roof on and retracted. This first version of the SLK was in production until 2004, when it was replaced by the second generation, a model that with profound modifications - and name change - is still being produced. 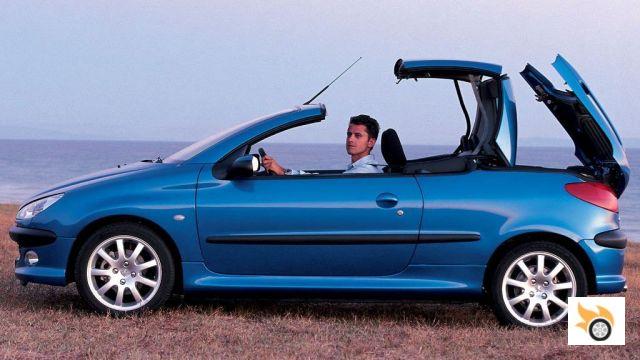 In the same way that Peugeot was the first manufacturer to market a convertible with a hardtop, it is also to be thanked for being the first to make it popular with the 206 CC. Introduced in September 2000, the 206 CC represented a real revolution by offering for the first time an accessible, reasonably practical and aesthetically pleasing convertible. Until the appearance of the 206 CC, there were many who dreamed of a convertible, but either could not afford it, or were wary of the delicacy of the canvas hoods and -why not say it- how exposed a canvas top is to vandalism.

Personally I find the design of the 206 CC very successful, and it is admirable how its designers managed to fit a cabin of 2 + 2 seats -certainly, the back ones are tiny- and its hard top in such a small car. In the same way, it is also commendable how a design that started with such strange proportions -at first sight- became so successful. 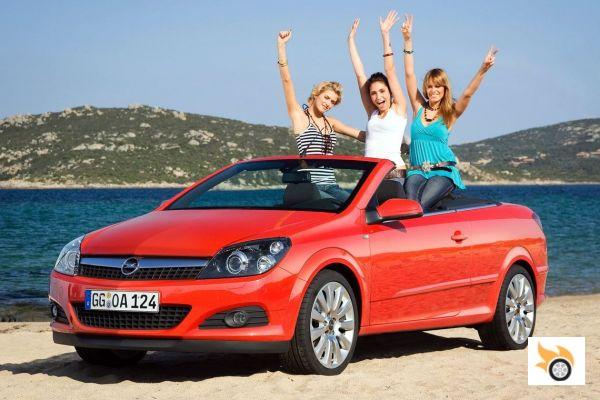 The golden age of the Coupé Convertible

The great commercial success of the 206 CC encouraged many manufacturers to launch this type of model, and so the Renault Megane CC and Peugeot 307 CC immediately appeared, 4-seater models that promised great versatility, but had some drawbacks: Firstly, and although the space for the rear seats was more or less reasonable, the backrest of the same was too vertical -conditioned by the kinematics and space needed to store the roof-, so that it was not comfortable to travel in the rear seats.


Secondly, the turbulences -travelling with the top down- in the rear seats of a 4-seater convertible are insufferable and as few customers bought and installed the windbreaker, most of them ended up taking their precious CC down very few times? To make matters worse, and to reduce as much as possible the dimensions of the roof, the windshield was stretched far back, almost to reach the vertical of the driver's head, which caused some loss of that "feeling" of going to the open sky of the traditional convertibles.

To solve or alleviate these problems, 4-seater convertibles appeared -read Astra or Eos- with complex roofs that folded in multiple sections, allowing less intrusive windshields and some more comfort in the rear seats. The Eos was particularly well-designed, had reasonable rear seats, and was aesthetically pleasing, but at the cost of a really complex roof design.

Then came models in higher categories, some of them like BMW's impeccably designed 3 Series Convertible (now 4 Series) that are still in production, and many others. Some roadsters -like the Z4- went to the hardtop... During the golden age of the folding hardtop, even the Chevrolet SSR was sold, a curious pick-up of retro-modern design with retractable hardtop, or the nice -I would love to have one- Daihatsu Copen, a tiny -it falls into the category of Japanese kei-cars- two-seater of retro design, of which there is already a second generation, although now with a very contemporary design.

The Mazda MX-5 RC (for Roadster Coupé) deserves a special mention, because Mazda decided to offer the third generation of its roadster in two variants: the usual and simple manual canvas roof, and a CC variant of synthetic material. But what made the MX-5 RC really special was that its silhouette -especially when open-, hardly varied from that of the soft-top variant, and in addition, it folded its roof into a separate trunk space -which was identical in shape and volume to that of the soft-top variant-, so the cargo capacity was not affected when open-top.

Now that the CC craze has passed, most convertibles - both hard-top and white-top - derived from "normal" cars have disappeared. In this sense, it is significant that the successor of the Z4 returns to the soft top, and a bit sad that even the SLC -precursor of the modern CC- does not have its future assured...

The reason for the disappearance of most CCs -and many convertibles- is due to several reasons. Firstly, as I mentioned above, compact four-seater CCs do not have very usable rear seats, secondly, they are expensive cars to develop, so they are not justified unless there is a certain level of sales, and thirdly - and perhaps most importantly - the market is fickle, and now what's cool is a "coupé" SUV with 20-inch wheels.

However, some brands are still confident in the idea, Mazda for example has launched the RF (for Roadster Fastback) version of its new MX-5, which although targa aesthetics, still has a lot of roadster, as even the rear window folds back. It doesn't seem likely that Ferrari or McLaren (who don't make cars with canvas roofs) will go backwards either. Daihatsu still offers the Copen, and Mercedes seems likely to go ahead with its SL...

Certainly, hardtop convertibles are in the doldrums, but after having owned canvas-roofed roadsters, and currently driving -because I was given the chance- a Roadster Coupé, I'd say that for regular use, the advantages -for a two-seater- of a well-designed retractable hardtop, far outweigh the disadvantages.

add a comment of Where are hardtop convertibles going and where do they come from?