We go back to 1915. Europe was engaged in its self-extermination in World War I, while the United States still remained neutral to the conflict of the old empires. The automobile and the motion picture were two inventions that were revolutionizing society. Movies had no sound, and few people could watch them at home, the populace went to the movie theaters where a pianola entertained the projection.

But we have come to talk about pornography. This art -if it can be understood in this way- may be as old as humanity, since representations of various kinds have been preserved since the dawn of time, but I won't expand on it because my training in art is almost nil. Its manifestation in cinema coincides with the cinema itself, because the year of the appearance of the cinematograph of the Lumière brothers (1895) the film "Le Coucher de la Mariée" appeared, translated from French as "The Dawn of the Married Woman". Never before had eroticism been seen in motion and deferred. It was not released until 1903, and of the 7 minutes of footage only 2 have survived.

The film in question cannot be considered a precursor to the "bangbus" genre as the action as such does not take place inside the car, although the prolegomena does. If we put ourselves in the mind of a man from 1915 and adjust the inflation of perversion, yes, it would be something similar to when O.G. "Mudbone" invites a girl to get into the big SUV of the moment to show her his stick shift. 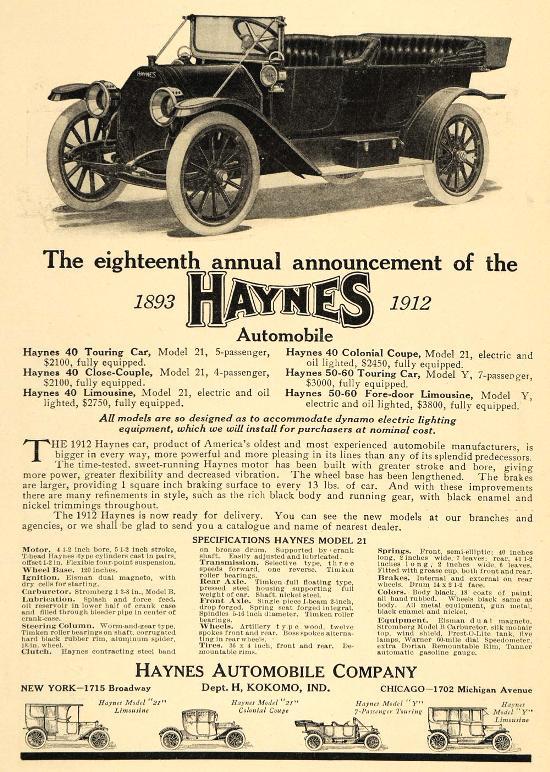 I don't want to tell you what it's about, it's 9 minutes long and I'm no friend of spoilers, but I'll just say the obvious: there's a gentleman, two ladies, and a Haynes 50-60 Touring Car Model Y from 1912. According to their advertising, it cost $3,000 at the time fully equipped, which comes to almost 65,000 euros today adjusting for inflation. It was a luxury car, keep in mind that the Ford Model T could be bought in 1915 for 390 dollars (more than what a Focus costs today), almost a third of what it cost at its launch!

It was a very large car, with a wheelbase of 10 feet. The three front seats gave play in the short

The Model Y was the most powerful of the Haynes range, with 50-60 hp. Among its equipment you could find things like the Eisemann dual magneto, Strombery carburettors, windscreen, five electric lamps, speedometer, Dorian wheels, and Tanner fuel gauge. Extras such as other paint shades, seat covers, horn, and nickel-plated parts were not to be missed. This and more information can be found in the book Haynes-Apperson and America's First Practical Automobile: A History, by W.C. Madden.

One of its peculiarities is the right-hand drive. The Ford Model T became a de facto standard with left-hand drive, but at that time there were no homologation regulations and everyone made cars as they pleased. Haynes were expensive cars and were produced in low volumes, a dozen a day in 1912. Haynes Automobile Company went bankrupt in 1924, years before the Great Depression. Jalopnik rightly points out that one of the founders of Haynes was Elwood Haynes, a strict plesbiterian, how funny would it have been for him to know what one of his cars was used for?

Don't worry, the attached video is from the all-ages, puritanical side of YouTube; no one will lose their job for watching it at work. If you are curious -cinematographic- about the complete tape, you can watch it in Wikimedia Commons. I won't go into whether it's a professional or amateur film, but because of the use of different shots and realization, it's not like those first films in which the general shots were infinite. On the other hand, there are no close-ups either, but they are close enough to the subject, very close for that time. On a technical level it's relatively well done.

A copy is preserved in the Kinsey Institute and in 2004 a remake was made by Lisa Oppenheim. No idea what car they used this time.