US abandoning the Paris agreement is a historic mistake 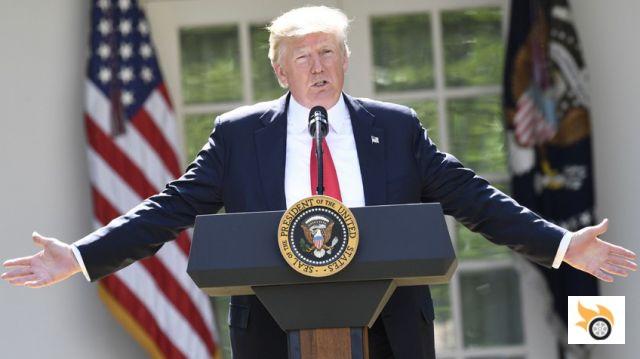 What difference does it make? Well, a very delicate system of balance in the world's climate will be altered. Not only will the oceans rise in level, but also natural disasters will become more frequent and with them economic and human losses. Donald Trump, president of the United States, must not care much because in the medium term he will be dead and will not see much of this. The United States will leave the Paris agreement in 2020, it can't do it before, and thus aligns itself with two major powers that had refused to sign the agreement: Nicaragua and Syria. What are the reasons? On the one hand, economic reasons, and on the other hand, the intellectual quotient of the occupant of the White House.

Even the Chinese have signed it. The Asian dragon is responsible for 30% of global emissions, the sum of all the territories except the US, the EU, India, Russia and Japan. The United States contributes 15% of the world's CO2. The North American country was supposed to reduce its emissions from 26% to 28% by 2025, taking 2025 as the base scenario. Trump is fulfilling his electoral promises, such as the dismantling of Obama Care and the commitment to renewables and the paralysis of polluting technologies such as oil, gas and coal. For a politician who keeps his promises... and we have to mourn.

Fortunately, the US cannot leave the agreement as quickly as sending a tweet, as several European diplomats and politicians remind Trump. Trump has the opposition of big business, even Elon Musk -CEO of Tesla- has abandoned him as an advisor. The tycoon has decided to turn his back on the world, as if he were not part of it.


The Paris agreement is designed for the long term: to prevent the planet's temperature from rising 2 degrees this century, which has already risen 1.1 degrees. They seem ridiculous figures, but talking about climatology they are very important numbers. In the 20th century carbon emissions have skyrocketed due to human action. At the rate things were going, the dystopian scenario of the movie "Waterworld" is closer every day that passes. Neither you nor I will live through it, our great-great-grandchildren will. And they will remember our lineage.

We will have to put up with Donald Trump until January 2021 unless some unexpected event happens that interrupts his presidency abruptly. Until another politician comes along who is able to remove Trump from the White House in the next election (late 2020), the US will not pull out all the stops, but even the world's biggest polluter will. The Chinese have started like a game of SimCity, polluting like hell, but even they are aware that they need to lower emissions.

And what is Donald Trump's excuse? That the agreement hurts US competitiveness, its jobs, its industry... all in the short term. Decades from now, when it is perhaps surpassed as a power, the regrets of not embracing the thesis of the 21st century will come. Hopefully, your country's automakers will not turn their backs on the world, and if not, they will continue to retreat in a world they no longer dominate.

How does this affect the automotive world? The transport sector is one of the key players when it comes to emitting CO2 into the atmosphere. In less than three decades we will have gone from a model based primarily on burning oil to a zero-emission, electric model, or so some people think. US manufacturers already missed the innovation train 10 years ago, and two of them - General Motors and Chrysler - needed an expensive bailout with public money. Ford as such was not bailed out, but it was nurtured with funds for alternative energy development.

The challenges for the 21st century are several: to reduce the bleeding of traffic accidents, to move towards autonomous and safe driving (*), to stop emitting greenhouse gases and pollutants... in short, to provoke another transport revolution comparable to that of ending the era of the animal horse and starting that of the mechanical horse. Betting on coal, oil, fracking... is not the right way to go. You can't expect much from a person who defined climate change as a tall tale to reduce the competitiveness of American industries. That's the level.


Donald Trump has achieved something unheard of, to get the whole world to agree on something: to be against him. Well, Nicaragua and Syria are missing, but they are not relevant actors. This is a real diplomatic success on his part.

(*): the ban on manual driving will be a long time coming, and if it ever comes, we'll probably all be old fogies by then.