The Pontiac Aztek was not only an ugly car, it was also revolutionary.

This model is considered one of the ugliest cars in history. I know that this qualifier is very subjective, the beauty is very different depending on the eyes that observe it. But we can certify that it is an exotic car by shapes.

This model, although it seems incredible, did not go through any market study. General Motors wanted a revolutionary model in design within the Pontiac catalog, one of the most classic brands of the group. They were looking for a modern vehicle that could appeal to a family man and a young and adventurous person. The Aztek project involved the best engineers and designers that the American giant had at that time, although it may surprise you, that's how it was. Curiously, a large part of that team is currently in charge of the new Corvette products, to give us an idea of the professionals who participated in this project. 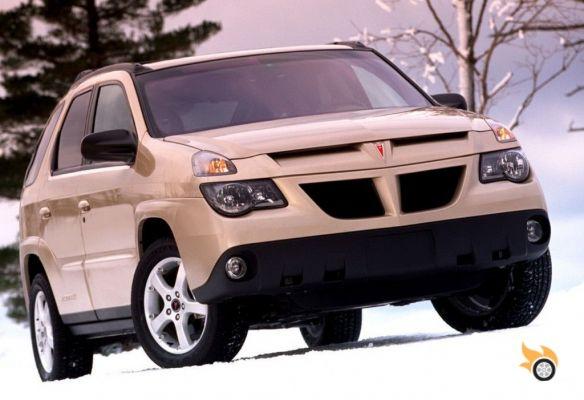 The problem of demanding a radical model in design and that changes the conception of a brand to the general public, is that you can go too far. And so it was, the Aztek was revolutionary in form, too revolutionary. It sought the good behavior that had a sedan, the habitability of a minivan and off-road capability of a light SUV, all in one model. Let's say it was one of the first 4×4 crossovers with a youthful and sporty design. The germ of what we know today in Europe as SUVs.

Its interior was spacious and its habitability was surprising. The trunk opened like a van, in two parts. It was higher than a traditional vehicle, had independent suspension on all four wheels, all-wheel drive, plastic protectors on the lower part of the body that visually joined the bumpers, two-tone bodywork. Turn signals separated from the front optics, fixed roof rack bars. Maximum luminosity and interior visibility was sought by giving it a large glazed part. 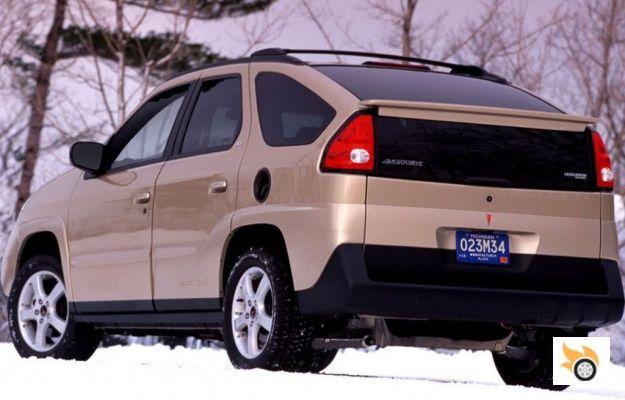 The mirrors were fixed and added an aerodynamic design to reduce noise. The interior of the cabin was very versatile thanks to its rear seat folding system. They also had the possibility of removing the rear seats creating an open rear area perfect for loading. The mechanics chosen were powerful enough to face any adventure, under the hood we found a naturally aspirated 3.4 liter V6 engine with more than 185 hp.

Many of the features I mentioned above are found in today's SUVs, others we would like to see included. Like for example the easy and simple seat removal, a system that the Aztek did include. It is surprising that for a vehicle of the year 2001 had so many original solutions and was the prelude to the current SUVs. Thanks to this great fiasco, today our streets are full of curb climbers. Models that little by little have been gaining the interest of the public, relegating the classic sedans and minivans to a better life. 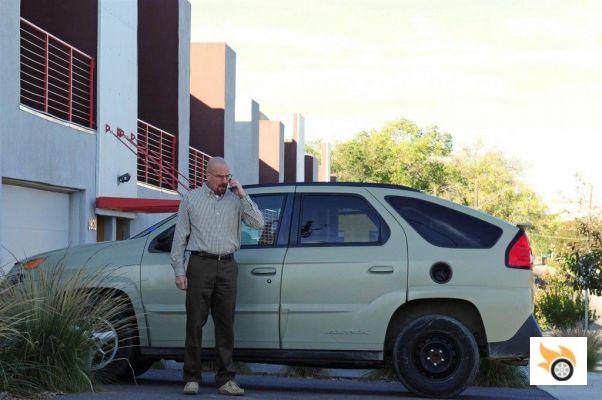 The Pontiac Aztek was a sales failure and did not change the image of the brand. Pontiac was still seen as a boring brand. This Pontiac was the prelude to the brand's demise, but it was not the cause of it, as some people said at the time.

You may be wondering why this model sounds so rare, sure you've ever seen or have been a follower of the popular series Breaking Bad, well, its protagonist was the owner of this unusual model.


The first time this project appeared on the table of General Motors was in 1994 with a design called "Bear Claw" in 1999 was presented a concept car that would advance the final model. As a concept car it was well received, but no one expected that these lines would make it to a production model. In the concept they could take some stylistic licenses that at the time of production were not profitable, just the visual details that made the Aztek series a model so criticized.


General Motors cataloged the Pontiac Aztek as a "Sports Recreational Vehicle" and unwittingly exploited a concept that was not very developed as the Crossover or SUV, an alternative to vehicles with sporty and youthful air. The Aztek was not the first SUV or Crossover, but it was certainly the first to create the current image of this type of vehicle that is currently triumphing in the United States and Europe.

Although it may surprise you, this car has many followers in the United States and a very active club, where proud owners of this unique car meet.

The Pontiac Aztek is for everyone's taste.

P.S: Don't miss the video below where you can see all the details of the Pontiac Aztek.

The Peugeot 402 and its Eclipse version ❯

add a comment of The Pontiac Aztek was not only an ugly car, it was also revolutionary.