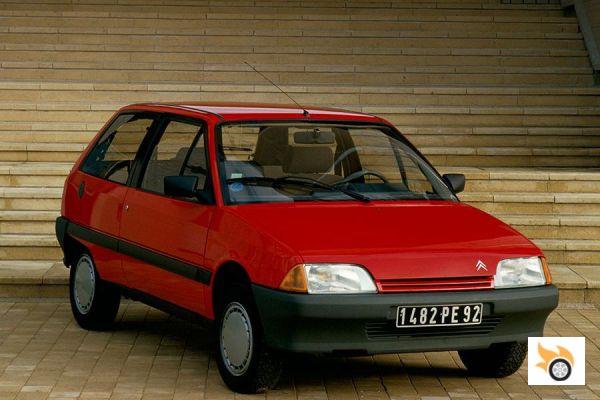 The AX had to replace the Visa and the LNA, cars that were not very successful. The Visa was an excellent car for its time, but had a very unattractive aesthetic, and the LNA (which was hardly seen in our country) had a hard time to succeed, basically because it was nothing more than a restyled Peugeot 104...

The birth of the Citröen AX

Our little AX began to take shape shortly after the oil crisis of 1979, a crisis that triggered the price of oil with increases of up to 270%, and this conditioned its concept and design. Citröen was very clever, and years earlier began to investigate, presenting two concept cars, the Citröen Eco 2000 of 1983, and the Eco 2000 of 1984, prototypes that delved into the concepts of aerodynamics, compactness, and lightness, key elements of the future AX.

Citröen was clear that the AX had to be very efficient, and the modern and efficient TU engine family would fit like a glove. In addition, the French brand designed a car with record aerodynamics for the time (Cx 0.31) and very, very, very, very light, and the AX weighed between 640 and 695 kg. It is almost 500 kg lighter than the current Citröen C3! The formula lightness + efficient engines allowed it to be the car with the lowest fuel consumption for many years, as well as being extremely agile even with its smaller engines.

Citröen has always known how to make comfortable and well-behaved cars, and the AX was no exception.

The light weight and unusually long suspension travel made it comfortable and very agile, a real giant-killer. Despite its size - almost twenty centimetres shorter than its predecessor, the Visa - the AX was reasonably spacious and had a boot capacity of 273 litres, quite an achievement! The AX's design and styling perfectly reflected the car's philosophy: simple, clean, aerodynamic, friendly... I've done some research but haven't found much information about its designer, although some point to Bertone, who at the time was a regular collaborator with Citröen.

Its simplicity, design, lightness, practicality, low consumption and modern mechanics made it a success, but it was also a very long-lived model, manufactured from 1986 to 1998 a total of 2,425,138 units of the AX, of which 812,951 were "Made in Spain".In Spain it was very successful, and thanks to it, the chevron brand went from a market share in Spain of 5.2% in 1986 to 7.6% in 1988, where it was also "Car of the Year" in 1988. We don't know how much of its success the AX owes to its funny advertising campaign, in which it was seen rolling down the Chinese Wall, and in which a little oriental boy became famous making the victory sign. Great!

The most piston-powered AX

A year after its launch, appeared the Sport version of 95 hp that made the lightweight car of only 720 kg fly, then came the 100 hp GTI, the GT ... all of them hilarious, and tremendously effective in twisty roads, it was also a car widely used in competition among private pilots.The Sport and GTI were those cars that immediately identified their driver as a pistonudo guy, one of those who like rallies and twisty roads, more concerned about having fun with your car, that to show off with him ....

There was an electric AX, and another 4×4!

Yes, there was also an AX with an electric motor that was sold in limited series for fleet owners and administrations mainly in France. It had a power of 27 hp, a top speed of 110 km / h, and a range of up to 100 km. It was in 1993, and at that time the electric car was far from being a mass solution. It also had a technological cousin, the Peugeot 106 Electrique.


A slightly higher, all-wheel drive version of the AX was sold, and although it had little "off-road" about it, its lightness and traction capacity made it an interesting car for customers in alpine regions. Other oddities that were left out were a Lotus prototype that was intended to compete with the Renault 5 Turbo, a sort of mini-van from Heuliez, and a speedster that Citröen called Xanthia (yes, with an "h" in it).

Extra lap: some ads for nostalgics

95% of Spanish drivers say they drive better than average ❯

add a comment of The Citroën AX celebrates its 30th birthday