Speed ​​record: the 5 most powerful hypercars ever

I speed record of cars have always allowed provide a certain luster and tenor to producers, allowing them to increase their visibility. Over the last few months, partner in crime a surge in hypercar production more and more powerful, they have been recorded numerous evidence of speeds that do not always appear in the official classification drawn up mainly by the International Federation of Automobiles (FIA), chaired by the former CEO of Ferrari Jean Todt. We have specified “mainly” as there is no single body for the validation and regulation of tests; the land speed record (LSR) is defined as the speed over a fixed length path, averaged over two strokes (steps).

In order to achieve validation I am two tosses are required, made within an hour of each other, with one speed deviation of at least one percent. There are no limitations on the type of route: in Australia and America, in fact, the tests are carried out on saline roads that allow an optimal journey completely free of depressions and inaccuracies in the road surface. The most famous street is the one located in the state of Utah, Nevada, known as Bonneville Salt Flat; here, in 1930, i first speed records on earth.

The cars to be allowed to the world rankings of speed records must adhere to specific restrictions which cannot be defined only by the type of circulation of the vehicle itself. In this regard, due to the numerous inconsistencies with the various definitions of production cars, several points have been indicated to be respected slavishly: 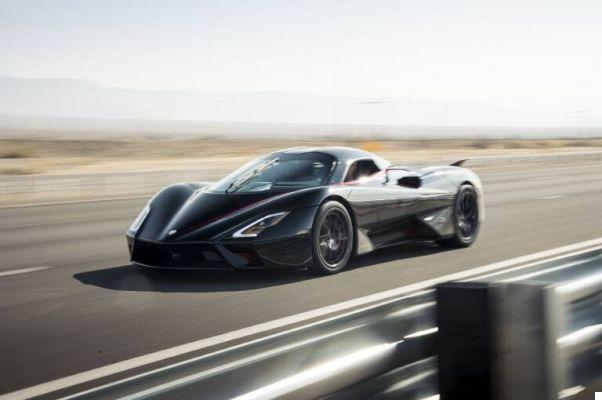 Over the years, therefore, several models were excluded from the official list as not complying the precise and clear rules defined by the competent bodies. In this regard it is necessary to remember some models such as the Lamborghini Countach 5000QV of 1985, disqualified for a modified airbox, the Hennessey Venom GT of 2014, removed due to a non-compliant VIN model, and finally the Bugatti Chiron SuperSport 300 of 2019 turned out to be a prototype version of the Veyron.

In recent weeks, the section dedicated to road speed records has been the subject of numerous discussions, thanks to a suspicious score achieved by the recent hypercar of the American manufacturer SSC, known as Tuatara, due to a not particularly accurate GPS measurement. 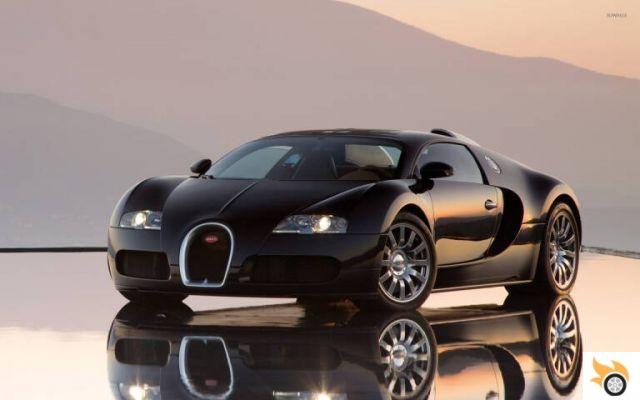 Produced by the French car manufacturer from 2005 until 2015, the Veyron EB 16.4 is one of the most expensive high-performance sports cars ever. Born to replace the historic EB110, the Veyron is equipped with a mammoth engine 16 liter W7,9 capable of delivering 1.001 hp and a maximum torque of 1.250 Nm.

The engine power is transmitted to the wheels through a cultural, DSG type 7-speed dual clutch, activated by paddles placed behind the steering wheel; the shifting time is approximately 150 milliseconds. Traction is permanent integral, developed in collaboration with Haldex.

The reduced drag coefficient combined with the vigorous thrust of the engine, created in collaboration with Volkswagen, allows Veyron to obtain respectable performance: from 0 to 100 in 2,5 seconds and a maximum (average) speed of 408,47 Km / h. 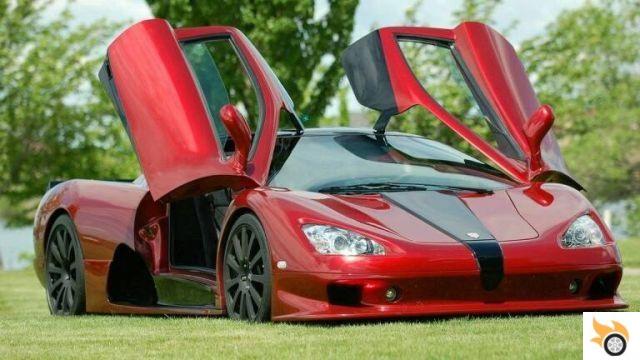 Designed and built starting from 2009 in different declinations, the Aero TT variant is one of the most performing models produced by the stars and stripes company. SSC Ultimate Aero TT is powered by a 6,3-liter supercharged, derived from Corvette C5-R V8, capable of generating a maximum power of 1.287 hp and 1.300 Nm of torque. Unlike the more "common" hypercars, the American solution adopts a 6-speed manual gearbox which, given the numbers involved, makes the driver's life less simple than that guaranteed by an automatic gearbox.

With the Ultimate Aero TT variant, an active aerodynamic system has been introduced capable of giving greater stability at high speeds. The car is able to cover the shot from 0 to 100 in 2,78 seconds and touch a maximum (average) speed of 412,22 Km / h. 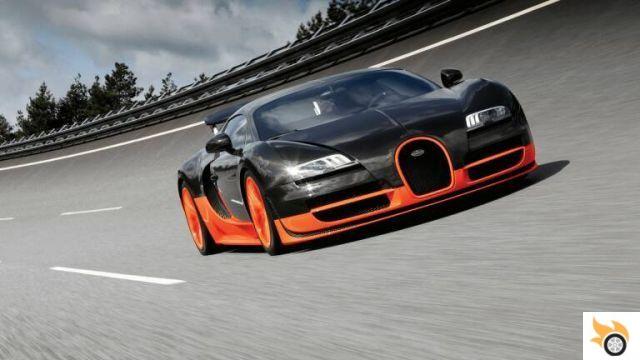 Presented in June 2010, a few years after the introduction of the basic variant, Veyron 16.4 SuperSport inherits much of the technology of the model from which it is inspired and at the same time integrates small modifications that have allowed it to obtain an important result in terms of speed.

Compared to the base Veyron, Bugatti engineers have made modifications to the engine increasing its power by 200 hp and 250 Nm; moreover, it was improved aerodynamics replacing the air intakes on the roof with two appendages directly inherited from the aeronautical sector.

This variant is finally 60 kg lighter than the normal one, thus managing to shoot from 0 to 100 km / h in 2,5 seconds. Important changes also on the trim and stability front; here, in fact, the technicians have improved the suspension in order to increase lateral grip. The update allowed Bugatti to reach a maximum (average) speed of 431,07 Km / h. 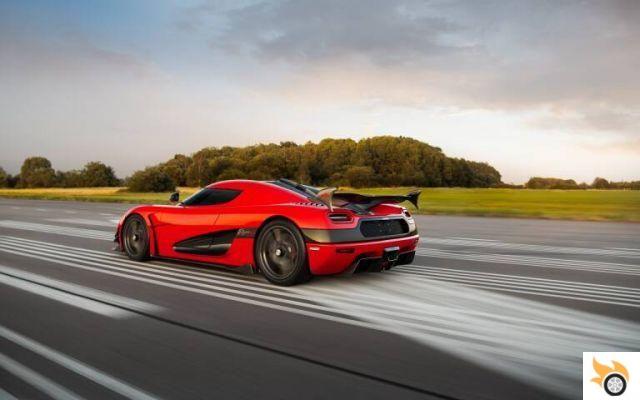 Act, in the RS variant, has accounted for several years the flagship for the Swedish home founded by Christian von Koenigsegg in 2004. Born in 2015, Agera RS houses an engine 8-liter bi-turbo V5 with a power of 960 hp in the basic version and 1.341 hp in its sportiest version. The frame and the body are made with quality materials, such as carbon and titanium, capable of keeping the weight of the car around 1.200 kg.

The speed record was set in November 2017 by test driver Niklas Lilja on an 11-mile strip on Route 160 between Las Vegas and Pahrump in the Nevada desert. As required by the regulations to offset any backwind, Koenigsegg's hypercar scored a average speed of 444,6 km / h, but also the maximum peak of 457 km / h. 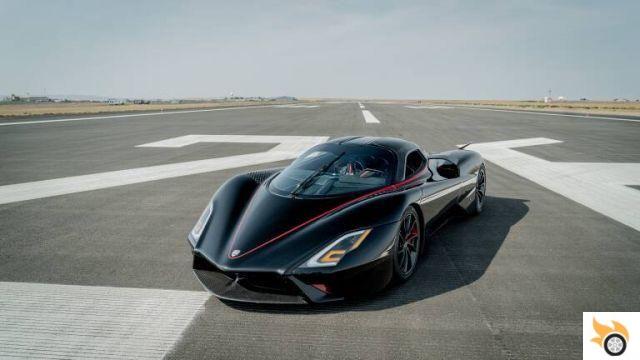 Born to replace Ultimate Aero and built in collaboration with Jason Castriota, former Pininfarina designer, Tuatara is the fastest car in the world. The development of the hypercar began in 2011, but due to some production problems the first model saw the light only a few years ago, in the course of 2018.

Tuatara was initially to be powered by a 8-liter V6,9 engine with double turbocharging but, to allow for a higher rpm thruster, the cubature was reduced to 5,9 liters. The declared power of the engine is 1.370 hp with 91 octane petrol and 1.774 hp with E85 fuel.

Rear-wheel drive, 7-speed automatic transmission and active aerodynamics: these are the aspects, together with the powerful V8, that have allowed the American brand to set the speed record. The drag coefficient is 0,279: among the lowest in its category.

During 2020, SSC has repeatedly claimed the record for the fastest production car in the world with a top speed of over 500 km / h; however, due to the absence of the approvals necessary to validate the record, the score was repeatedly subject to doubts and criticisms. Following the execution of numerous launches to obtain the coveted record, in 2021 the american house has finally reached the desired target: 455,3 Km / h in "round trip".

The measurements in this case were carried out with a Racelogic VBOX 3i instrumentation approved according to ISO standards, so as to dispel any further doubts.

What can we expect in the future?

The answers by leading manufacturers and (former) world record holders they will not be long in coming; Bugatti and Koenigsegg themselves have recently produced hypercars that can benefit from state-of-the-art powertrains and technologies.

For example, Koenigsegg Jesko, the Swedish hypercar born to replace Agera, benefits from an engine 8 hp 5-liter bi-turbo V1.600 assisted to a 9-speed Light Speed ​​Transmission gearbox and 7 clutches, faster than any double clutch and patented by Koenigsegg. According to what is estimated by computer processing Jesko, in the more powerful Ultimate variant, it could even break the 500 km / h wall.

Il future, however, seems to have taken theelectric e dell 'hybrid, also in the sector of hypercar, therefore the inclusion of some cars characterized by a completely different propulsion system from the one used up to now. We just have to wait; the big change could also come in this sector.

OBD readers: what they are, how they work and what can be done ❯

add a comment from Speed ​​record: the 5 most powerful hypercars ever