The reason? The roof and doors of the Roadster Coupe were leaking and letting water into the cabin. The problem was not with the roof or the doors themselves, but with the structure of the chassis itself, which meant that repairs to the vehicle cost the brand €3,000 under warranty. And to that had to be added the cost of having to modify the production process to solve the problem.

Daimler took then, in 2006, the very complicated decision to stop production and cancel the model completely, something that many of us felt really bitter. The Smart Roadster was an interesting car, with its flaws, yes, but interesting.

We liked it so much and we find it so interesting that today we bring it to you as the protagonist of this weekend's "used, yes, but interesting". And we are going to focus on the most appealing version of the whole range: the Roadster Coupe Brabus, which combined increased trunk space with a 101 horsepower engine. 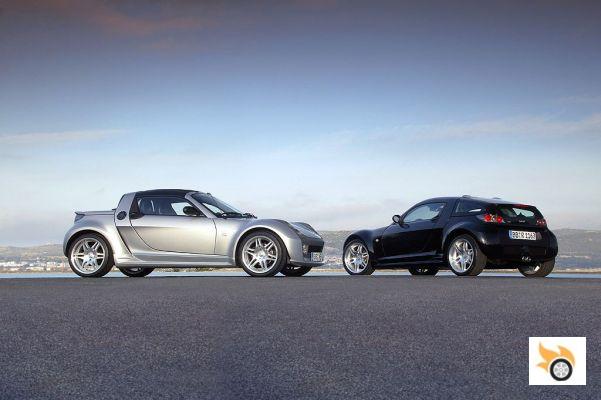 The "Coupe" version, on the right, offers better aerodynamics and more boot space.

Make no mistake, the Smart Roadster Coupe Brabus was no missile. At 913 kilograms of weight for 101 horsepower we're talking about a power-to-weight ratio of 9.13 kilograms per horsepower, which is no mean feat. Against the clock, it didn't break 100 mph until after 9.8 seconds, on its way to a top speed of 190 mph.

With figures like this, one might think that this little two-seater was "all image and no substance". But nothing could be further from the truth. When you get into one you discover an ultra-low driving position, with the legs stretched out like a racing car.


It's not fast like a compact or sport utility, but it's very, very fun to drive.

As it has the famous (but bad) sequential gearbox, you have only two pedals to control the car, and you can comfortably get behind the steering wheel, and hold it with both hands, while your index fingers are behind the gearshift paddles. Once you get going, it's a car that begs to be fun. Around town, with the Brabus trim, the truth is that it's a little hard to handle potholes and the hated urban speed bumps, but nothing that's insufferable. Visibility is acceptable, although not wonderful (you go very, very low), but the car, with its three and a half meters long, fits anywhere, and is extremely maneuverable. 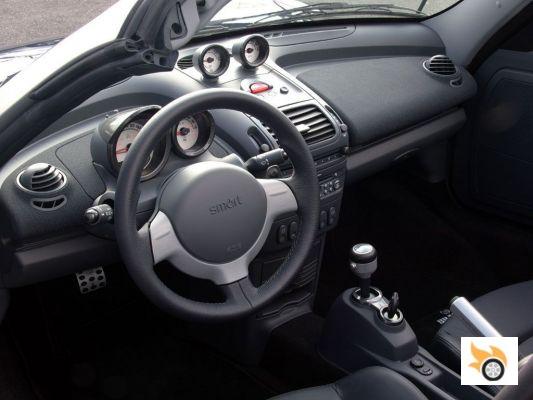 The driving position is typical of a small two-seater sports car, with the legs elongated and the butt flush with the asphalt.

But the best is when you go out on a mountain road with many curves, preferably in second and third gear. The Roadster Coupe is light at that precise moment. With an extraordinarily low center of gravity, you can negotiate corners at full speed with little or no roll. The engine hangs behind the rear axle, and that dictates two fundamental parts of its cornering. The first is that at the limit, on corner entry, it can be a bit understeery. And the second part is that its traction ability is, plain and simple, great.

You can throw yourself into the apexes of corners on the brakes, put the steering wheel in (with lots of good information through its rim), and get the pedal to the metal out of every corner without losing a tenth of a second in a skid. If it rains, the stability and traction control will act as a guardian angel, but believe me, with 101 horsepower, there is less engine than chassis, so it will be rare that the ESP will have to help you.


The suspension is stiff, but it doesn't throw you off course. At the end of the day's cornering, you'll come home with a smile from ear to ear, because of the old-school sports car feel. It's like a miniature Lotus Elan or Elise, but in its own way: it's not rocket-fast, but it's satisfying. 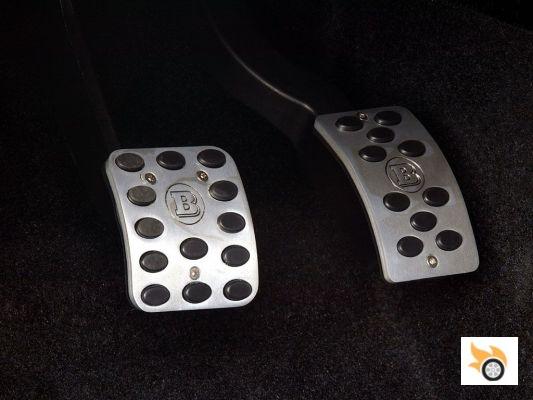 The sequential gearbox reduces the number of pedals to two, but is exasperatingly slow to change gear.

If you have to use it on a daily basis, for commuting or shopping, you'll discover a car that, in the real world, is capable of averaging just 5.5 litres of average fuel consumption. There's room for two people in the cabin without being cramped, and the boot, though small, is sufficient for the impediments of everyday life. It's clear that for a holiday, its 86 litres of luggage space is limited and will make you have to select twice the clothes you take with you, but as a second car (or as a single or couple's car) it's "liveable".

The downside? Dynamically speaking there is one downside, which is none other than its obnoxious sequential gearbox. Its gear changes take a second. In town or in relaxed driving you can get used to its "sluggishness" when changing gear. But when you're having fun, and you're entering a corner fast, with your foot on the brake and looking for downshifts at full speed, you get desperate.

It's versatile on a day-to-day basis, and allows you to put a smile on your face when the road twists a little, despite its slow gearbox.

It's the same when you're accelerating. You ask for gear changes, but the gearbox takes it too patiently, killing you. Can you live with it? It's all a matter of getting used to it. The Roadster Coupe offers a lot of good things, and this one bad thing. It's up to you to test drive one and convince yourself that you'll be able to live with this transmission.


How reliable is it?

There are several important points to look at when buying a Brabus Roadster Coupe. The first is roof and door leaks. Smart discontinued the car because of them, so take the unit in question to a car wash and see if water gets inside the cabin when you hit it with the pressure washer. If it does, find another unit. 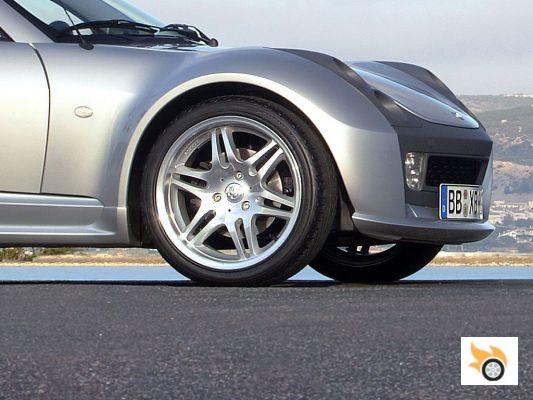 Tires are prone to bending and scratching

Another sore point is the Brabus aluminum monobloc wheels. They are tremendously soft, so it's not at all uncommon to find them bent, chewed, or just plain messed up. Also, their coating to prevent corrosion is lousy, so it wouldn't be uncommon to find some with signs of rust on their aluminum alloy. The best thing to do is to find a unit with the rims in the best possible condition, and if not, take them to be repaired, reserving a budget for it.

But you should always remember that going over potholes or major holes at high speed can cause damage to the rims, and end up with what looks like a puncture.

Other weak points of the car are the front springs (they can rust and split), steering play (because the rack loosens), and the engine overheating easily at a standstill. Any of these problems, if seen on a unit, mean you should discard it and keep looking.

How expensive is it?

You can find Brabus Roadster Coupes for around £10,000, and that should be your budget. Buying a non-Brabus will leave you with a car that's too slow for a driving enthusiast, plus Brabus are better looking and hold their resale value better over time. 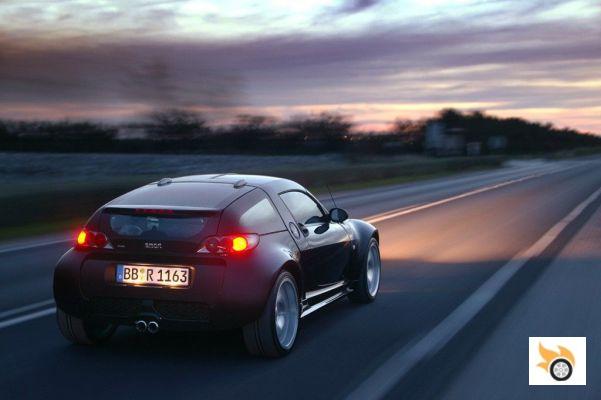 It's a great buy if you're looking for a simple, small, sporty car for everyday use.

Fuel consumption and maintenance are more than acceptable, so it's a sensible buy. Third party insurance would be around 550 euros for a driver with more than five years of license, more than 25 years, and no recent accidents.

In conclusion, after seeing the forstars and knowing the electric mechanics that Smart is starting to offer, we would like to see this concept transformed into the successor of the Roadster Coupe, with electric mechanics. With it we would recover the passion for this type of cars, economic and fun, and also would solve the problem of the sequential gearbox.