Back in 2007, a restless 19-year-old Croatian from a wealthy family, Mate Rimac, was fascinated by the world of electricity applied to the automobile as a means of propulsion. So much so that he started his personal project in his own garage. He wanted to convert the BMW M3 E30 that he used in some competitions into a fully electric car, starting from scratch, with his own knowledge and means. And he succeeded: batteries, BMS and charger in the back seats and trunk, motor and inverter in the engine compartment. The initial results were not what Rimac expected, and he evolved it up to five times. The result was a car with 600 hp and 900 Nm of torque, capable of propelling it from 0 to 100 km/h in 3.3 seconds.

The "Green Monster", as he calls it, was the first step towards achieving his dream: a fully electric supercar that would compete in the big leagues with the best cars on the planet. 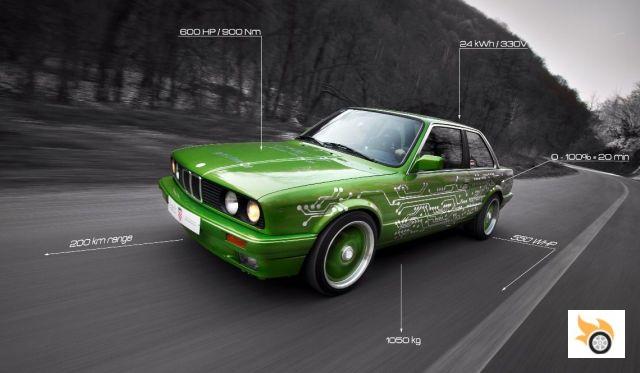 This e-M3 served as a showcase to prove that he was capable of creating a high performance electric car. Two years later, Mate Rimac created Rimac Automobili near Zagreb, to shape what would become his flagship project: the Rimac Concept One. They started from scratch, hiring engineers and technical staff, to make a design that would start from a blank sheet of paper, and meet all the requirements Mate Rimac had in mind. It was in 2012, after three years of intense work, when they presented the first prototype. The Rimac Concept One was born.

Curiously, one of Rimac's first clients was Spanish: Applus and Idiada bought a Rimac, modified the bodywork, reduced the battery, and named it Volar-e, "selling" us that they had developed it in just four months with 180 engineers, obtaining in return 50% EU funding. No comment.


The production of the Concept One is limited to eight units, at a unit price of around one million Euros.

Back to Rimac, the funding for the project came from the sale of some patents, and from the family fortune. Although it was enough to get started, a few years later it was necessary to seek outside investors to continue the development and refinement of the prototype. It was then that Rimac Automobili received a 10 million euro boost from two wealthy investors. With this, the production Concept One arrives at the 2016 Geneva Motor Show, which we are now going to get to know in more depth.

The exterior design is the work of Adriano Mudri, a young Croatian designer who has worked for Lamborghini, Opel and Qoros. In its carbon fiber body, the rotund lines of a supercar are sculpted.

The front, imposing for its width ratio and low height, is dominated by the central grille, side air intakes and flanked by the torn headlights, with a very particular light image. It reminds me to some extent of the design of the Savage Rivale. Original and with its own personality. The side is perhaps the most original part of this Rimac. In the center has been left exposed carbon fiber, giving continuity from the front, narrowing as it moves towards the rear wheel, and leaving a very elegant ventilation intake. Marked shoulders and narrowing of the C-pillar funnel top a muscular side.

Moving to the rear, we see something that catches our attention: there is no rear window. From my point of view, as there is no glass and it's painted, it's a bit heavy. Perhaps it would have been a better idea to leave the rear cover with carbon fiber naked, to provide that contrast that visually lightens the rear. The light image of the headlights seems to me correct, but lacking in originality. I think this is the worst part of the car, where Mudri could have been more creative.


As for the interior design, the person in charge is Goran Popović, also Croatian and Pininfarina employee. We see a clean interior design, which has two screens: one for the speedometer and driver information, and another as a tablet, in the center console for other functions. If we look in detail, we see that most of the parts have been designed and manufactured specifically for this Concept One, as for example the satellites or the controls of the central console. Rimac prides itself on designing and manufacturing its own components and systems.

More than 20 engineers are involved in the design and production of this car, which boasts of being one of the fastest cars on the planet.

Turning to the center console, we see five rotary knobs. The biggest one is in charge of selecting the gear, apart from turning the car on or off by pressing the top button. Next to them, we find the parking button or the power window controls. On the steering wheel there are two paddle shifters. With them you can select gear 1 or 2. We will see it in more detail in the next section. 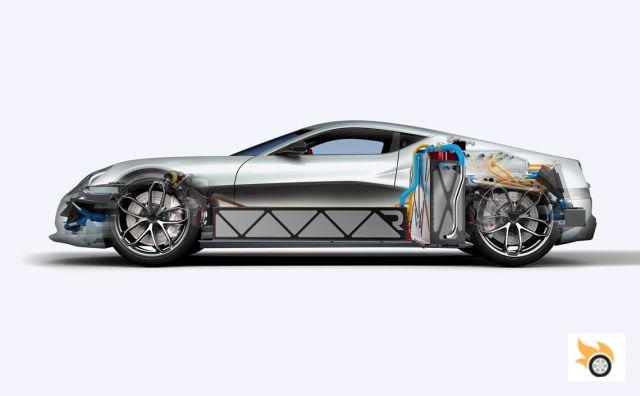 Let's take a look at the interesting technology of this Rimac.

We find a space frame tubular chassis, made of high strength steel (with chrome and molybdenum, also known as Chromoly), to which are joined pieces of aluminum and carbon fiber.

The suspension is double arm on both axles, but with a push-rod arm. This configuration, very similar to the one used in F1 or in some Lamborghini or Ferrari models, is used to bring the spring-shock absorber set inside the bodywork, either for aerodynamic issues, or packaging improvements. It is nothing more than an arm anchored to the lower triangle of the suspension, subject to a triangle that acts as a rocker, which in turn pushes or stretches the spring-damper assembly. Due to its characteristics it is usually used in very sporty cars with little total suspension travel. 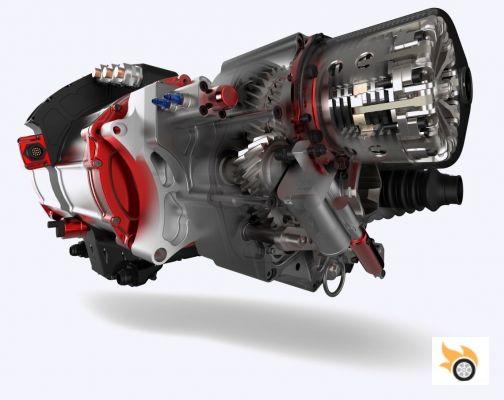 One engine per wheel, two gearboxes

The most peculiar thing about this car is that it has one engine per wheel and two gearboxes. On the front axle has two engines, coupled to a single reduction gear. And on the rear axle it has two motors, one per wheel, each coupled to a gearbox with two gears and double clutch with carbon fiber discs. Very F1 style. Why two gears? The electric motors, having so much torque from a standstill, only need one gear to couple their rotation to that of the wheels. In this case, to improve acceleration from a standstill, Rimac has included a low gear - number 1 - simply to break acceleration records. In reality, the car can always be driven in gear 2, because it has more than enough torque. 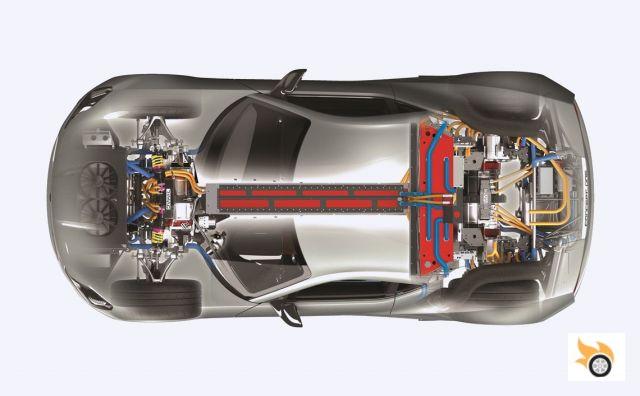 The batteries of this Concept One are something prodigious: it has 8,450 LiNiMnCoO2 cells, with a nominal voltage of 3.7 V each, which together give a total of 650 V nominal with an available energy of 82 kWh. Therefore, doing some quick calculations, we see that the battery of the Concept One is 176S48P. Why so many modules in parallel? Because to generate 810,000 W of power at 650 V requires about 1,250 A. From this we deduce that each cell generates 26 A at maximum discharge. If we divide the total power by the number of cells, we see that each cell has 9.7 Wh. Dividing by its nominal voltage, we have the nominal Ah, which is 2.6 Ah. Therefore we can deduce that Rimac uses its cells at 10 C at maximum discharge.

This type of cells has a high energy density (around 160 Wh/kg), but they have a high risk of fire, if their nominal charge values are exceeded. Therefore, in this case, the BMS is key to operate with absolute precision. That's why Rimac has designed and built its own.

As for the battery climate control, the system is also proprietary, and it's a liquid cooling system, presumably with oil as well, just like the motors and inverters. Using oil is much safer than using water, since being a dielectric, a leak in the cooling system would not cause a short circuit. Rimac doesn't offer autonomy data, but it is estimated that with a standard driving (200 Wh/km), it can be close to 410 km.

If you have any doubts about any of the concepts mentioned above, you can refresh your memory here and here. 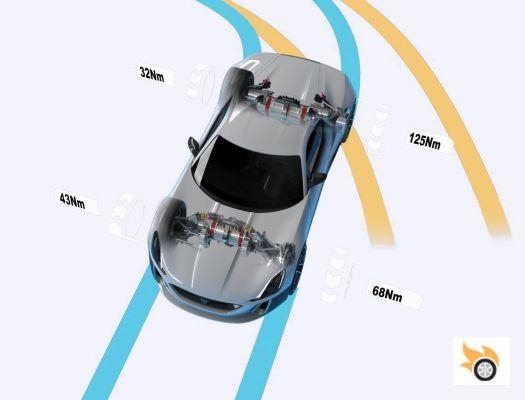 Now we come to the star that Rimac is so proud of: the R-AWTV. What is it all about? It's about coordinating all the engines, so that they offer the right torque at every moment, according to different parameters. Among these parameters are those chosen by the driver. We have at our disposal to choose the behavior of the vehicle, something very innovative: understeer, neutral or oversteer. We can also choose whether the regenerative braking will be more front or rear. We can select the power on each axle, letting only the front axle motors work, only the rear axle motors, or any combination of both. Impressive.

With all these parameters, plus lateral accelerations, longitudinal accelerations, steering wheel rotation, throttle and brake, the ECU is responsible for sending the appropriate torque to each wheel individually, resulting in the behavior of the vehicle that we want. For example, if we have chosen an understeer behaviour, and we turn to the right, more torque will be sent to the outboard motors, giving priority to the front axle. Masterful. You can see it in action in this video.

On the central screen, of generous dimensions, we can see hundreds of technical parameters of what happens on board the Concept One; and even incorporate the graphs that we ourselves want, such as battery temperature, consumption, power, acceleration, torque of each wheel, etc.. You can also listen to music, but that's the least of it. Rimac are very proud to have developed this multimedia system themselves. And the truth, in view of the result, they deserve our admiration. If you are curious, you can see it explained by Mate Rimac himself here. 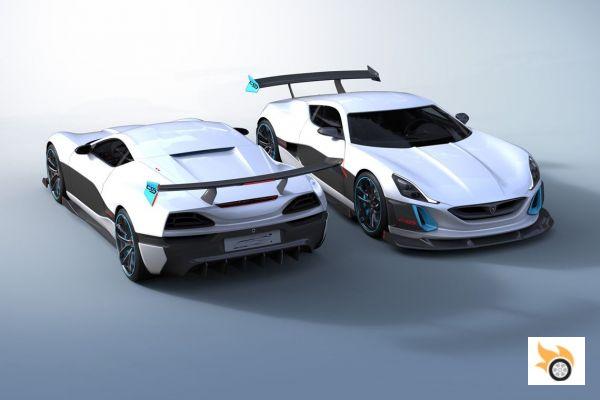 We can not finish without mentioning that Rimac has squeezed a little more engines and batteries, materializing it in a new model: the Concept S, a more radical Concept One. More powerful, with 1,384 hp, 1,800 Nm of torque, splitter, spoiler, deflectors, less weight, better tyres and some colour details, it can take you from standstill to 100 km/h in 2.5 s, and reach a higher speed than a Concorde at take-off: 365 km/h. Barbaric. Alcantara interior, red controls, and telemetry incorporated in the central screen, make this Concept S a real racing machine.

Another curious detail, that we can't overlook, is that thanks to the great talent that Rimac Automobili has, it has achieved enough confidence to be in charge of designing the electric part of another supercar: the Koenigsegg Regera.

Although some of us still bristle at the sound of those high-revving gear changes, I have to admit that the future of the automotive industry is already written, and it's all about electrification. Elon Musk or Mate Rimac are two names that show how you can challenge the status quo by creating innovative and exciting products. At the end of the day, electric or thermal car, the power of the engine makes us vibrate with its driving. That's why we're pistonheads.

Finally, perhaps the most shocking video, where a Rimac Concept One is confronted with a Tesla Model S and a Ferrari LaFerrari. From now on, when we hear "Croatia", we will dream of its landscapes, its beaches... and its roads at the controls of a Rimac.