Opel redefines itself with an outdated logo and a new tagline

From "we love we live cars" ("wir leben autos" in German) to "the future is for everyone", its new slogan. It alludes to Opel's ability to democratize engineering advances and make them available to car owners of its price range. Opel is a mid-priced manufacturer among the generalists, although in recent years it has sold more mid-range and top-of-the-line cars than the simpler ones.

I have a suspicion that the future direction PSA has for Opel is not particularly ambitious. Opel goes from having the most sophisticated and elegant logo to one of the simplest on the market. It's so simple, it would pass as a mere shadow of the current one. Dacia has a more elaborate badge. In fact, it's so simple, that the Kadett of the 80s didn't even need a metal plate on the nose of the car. Incidentally, little else and it would pass for a modern crossover with those plastic fenders.... 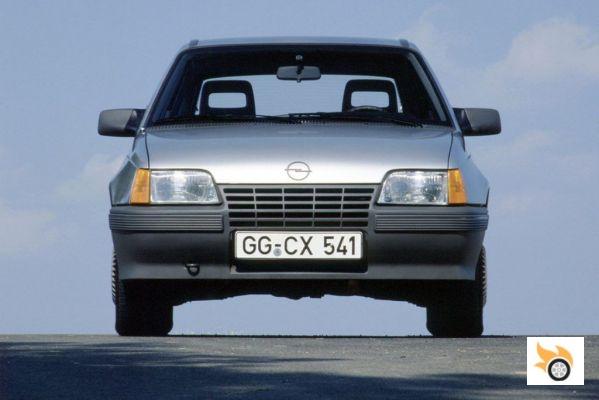 This journalist is not a design expert, but he understands a bit about logos. It's completely outdated and out of fashion. It doesn't even fit in with the much-vaunted minimalism of Apple, Google and the like. The chief designer has taken more time to recover the old logo in vectorial from dusty floppy diskettes than anything else. And what is more worrying, this logo now looks ridiculous next to the sophisticated and cosmopolitan shields of Citroën, DS and Peugeot. On the other hand, and as I am reminded in the comments, Audi and MINI have also gone to the pure 2D of bygone eras.

I wouldn't want to think wrong, but this logo has been announced the day after the resignation of CEO Dr. Karl-Thomas Neumann, who has been directing Opel's destinies since March 1, 2013, and who has previously worked at Motorola, Volkswagen, Continental and again Volkswagen, was made official. Neumann wanted Opel to be a primarily electric manufacturer before the end of the decade. Rumor has it that he hasn't tuned in very well with the new owners.


I can just imagine the scene of Neumann seeing the new logo and saying, "IMMEDIATEN DIMISIONNEN!"

Maybe the new logo is all about cost savings in communication, the badges on the cars... But is this really necessary to get Opel out of losses? No, I don't think it's a simple cost issue, it smells more like ideology: that Opel is not above Peugeot, of course, maybe a more simplistic approach like Citroën (which still has its cache, don't get me wrong).

In my early days as a tester, I drove the Corsa (C), Tigra TwinTop (B), Vectra (C), Meriva (A)... All those models had the common denominator of having more spartan and simple interiors. You could even notice it in the smell. In the long run they are more durable than they seem, but they were certainly a bit far from Volkswagen, to cite a German example. I'm afraid Opel will end up dropping a step, and on the other hand, it makes sense, it doesn't have to compete directly with PSA's pretty girl, which is Peugeot. DS does have a differentiated positioning.

As you can see in the image below, Opel has undeniably gone down in logo. As for the slogan, it's debatable, but I like the "we love live cars" one better. In the last years of the General Motors era, and already overcome the ghost of selling the brand to Magna or Russian entrepreneurs, there was an effort to make better cars, more refined, more durable...

There is no intrinsic problem with Opel joining the trends of the future (electromobility, car sharing, autonomous driving, new mobility services...). The problem will be that the brand will be devalued. I'd rather err on the side of caution than incautious, and this move makes me wary of PSA's intentions for Opel. Neumann wanting to leave doesn't smell good to me.


Incidentally, Vauxhall, which is the UK equivalent of the lightning brand, retains its logo at the time of writing, and at the level of detail, it's about as far away as the Nintendo NES (8-bit) from the Cube (64-bit).