Once upon a time the Porsche Boxster Concept

In this context, the then director of Porsche, Wendelin Wiedeking and his team had the foresight to think that the solution had to come from the hand of a new sports car more accessible and manufactured through a more efficient production process, and therefore, more economical. Porsche started by signing a collaboration contract with Toyota, which would advise the German brand in the design of a new production process, more effective and efficient, and focused on achieving a constant manufacturing quality, avoiding reprocesses. If you haven't heard of the Toyota manufacturing method -of which I'm a fan-, I recommend you to do some research.

It was 1993 when Porsche unveiled the Boxster Concept at the Detroit Motor Show, a preview of what would become the production Boxster that saw the road in 1996, and which we assume Porsche began working on in the early 1990s. The choice of Detroit was not accidental, because at that time, 60% of Porsche sales went to the U.S. and the concept matched perfectly with what the American middle class was looking for at that time. The presentation was a success, and a few months later, Porsche officially announced that the model would go into production.

The first thing that struck me about the Boxster Concept was its small size and restrained proportions. It was only 4.115 mm long, low, not very wide and very, very compact, it made me think of "the Miata of Porsche", because although Porsche did not announce technical data, the space for the engine seemed reduced, on the other hand, the discreet air intakes did not seem to announce a very powerful engine... I would say that for its proportions, rather than a 6-cylinder, the concept car seemed the ideal "box" for a 4-cylinder boxer ... I remember that at the time it made me think of a power -of the time- about 160 or 180 hp, ie a kind of mid-engined Miata, a little faster, and a little more focused on efficiency.


In terms of styling, the young Grant Larson -under the direction of Harm Lagaay- designed an exterior very much inspired by the famous 550 Spyder -look at the way the long rear bonnet descends from just after the seats, at the rear wings- with a very minimalist language and with simply delightful curves and proportions. The curves of the rear wings, rather than strength, add rhythm, compensate for the lowering of the rear bonnet, and add movement.

The front light clusters also had an interesting design, and their discreet and very elaborate air intakes - finished in a beautiful bronze effect - put the right note of rupture and color. No matter what angle you look at it from, the car always returns a subtly sensual yet understated shape, with the beauty of a delicate ballerina.

The colour of the interior could not have been better chosen, and in contrast to an exterior tone that suggests purity and lightness, the reddish brown of the interior is welcoming, natural, classic, and at the same time extroverted. Stefan Stark was in charge of its design and did a great job, with an interior design that is striking for its organic shapes and technological details. An interesting detail is the way in which the bodywork connects with the interior through the upper part of the doors, "entering" the cabin; the same solution that Mazda has used in the MX-5 ND.

This philosophy, which aims to dilute the aesthetic separation between the exterior and interior, continues in the piece that houses the clocks and in the center console, a console that shows a beautiful shift lever with part of its mechanism in sight ... beautiful. Very detailed, it included a kind of little fans in the air outlets that I think are super cool. Also interesting are the retro details built in a translucent orange plastic, which adorn some interior details and can also be seen in the exterior Boxster logo.


All in all, a compact concept car with a classically inspired yet fresh design that is aging really well. 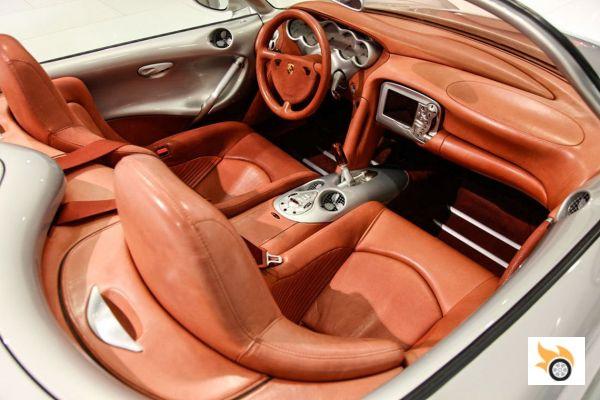 From concept car to production Boxster

The first generation Boxster was introduced in 1996 - only three and a half years after the concept car - and although it kept the general idea and some of the aesthetic language, it grew in length to 4315 mm (no less than 20 cm) and also in overall volume, not that it was a big car, but it seemed to want to clearly move away from the size of the MX-5. In terms of design, it lost quite a bit of the delicate balance of volumes, and above all, its surfaces and curvatures were not as elegant and subtle as those of the concept car. The 200 hp of the first series Boxster was a respectable figure for the time, and it put the new German model on a clearly superior level to the rest of the compact roadsters. As if that were not enough, and to finish marking distances, shortly after appeared the S version with 250 hp.

The car was an immediate sales success, and as its manufacturing costs - thanks to Toyota's help - were relatively low, the car was profitable enough to balance the company's economic scales. Then came the Cayenne, and then the Panamera - the cars that have made Porsche one of the most profitable brands, or the most profitable - models that some see as necessary evils for the Stuttgart brand to survive and continue making the Boxster and 911.


Porsche has been gradually evolving the Boxster, a sports car that has been growing gradually, both in size, which has gone from the 4,315 x 1,780 mm of the first series to the 4,379 x 1,801 mm of the current one, and in power, which has increased from the original 200 to 300/350 hp of the current 718 Boxster and 718 Boxster S, only this time with four cylinders instead of six. The price of the current Boxster is in line and although less expensive than the 911, the basic Boxster costs 61,500 Euros, and unless you equip it with parking sensors, windshield, and some more stuff, you're going to go to 70,000 euros.

The Boxster has been adapting to the times, and the middle class -for which the concept car was designed- has been shrinking, and on the other hand, there are more and more rich people. Certainly, the Boxster is much more mature than the original, much more efficient and refined and the 718 Boxster is at a level of performance, refinement and effectiveness that the supercars of a couple of decades ago didn't even dream of... One might wonder if -since the current Boxster has "grown up"- there is room for a car like the little Boxster Concept of 1993...

I know it's not going to happen, because it probably wouldn't be profitable, or - as some brand manager claims - because it wouldn't fit with the brand's positioning and clientele, but if you don't mind, let me dream of having a Boxster Concept in my garage, a car barely bigger than the MX-5, just a bit more powerful, and with a chassis as balanced as the Boxster's has always been. 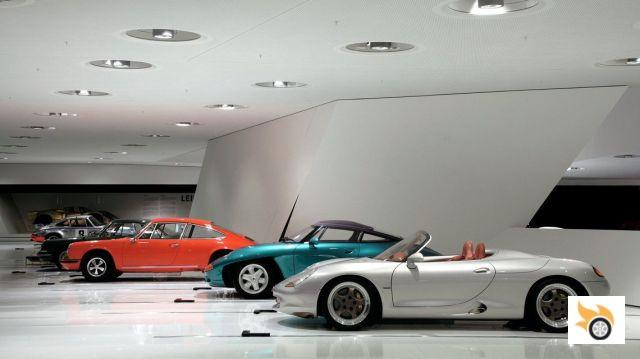