How about an MX-5 Coupe as a Mazda Sports Car Concept?

The presence of the Cosmo Sport on the Mazda stand makes one think logically of a concept car powered by a rotary engine. Mazda, which hasn't had a Wankel engine in its lineup since the RX-8, is still working to make the rotary piston engine a relevant proposal in its lineup. So yes, it makes sense that it would be the evocation of a large Wankel-powered coupe, what some have already dubbed the RX-9. 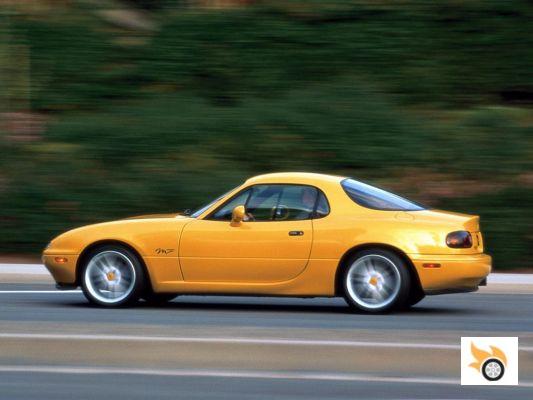 Honestly, it would be very bold of me to make predictions about what will or will not be the Mazda concept car for this year's Tokyo Motor Show. What I can safely say is that as soon as we see the "RX-9", everyone will want one and Mazda will tell us: "It's just a concept". And that's when I remembered Mazda's "mania" of presenting concept cars with coupe bodywork based on the MX-5 and, with very few exceptions, not putting them on sale. Without trying to guess what the "RX-9" will be like, what I propose is a small review of the MX-5 coupes of the brand.

In the special we dedicated to Mazda this summer, you saw that the idea of an MX-5 coupe was considered from the very genesis of the car, although they finally opted for a classic and updated roadster version. But even after its unveiling at the 1989 Chicago show, Mazda's design studios in both California and Japan continued to investigate the idea of an MX-5 coupe developed on the basis of the MX-5 roadster. The proposals from the two studios were never shown in public, although the Californian studio's proposal would see the light of day in 1992 in the form of the Mazda M Coupe Concept.

With its double-humped, Zagato-like roof and twin-arm wheels, the M Coupé seemed ready to go on sale. But it wasn't, it was shown at a couple of shows, featured in a few magazines and went to Mazda's museum. As for the creative teams, they continued with the development of the second generation MX-5. But Mazda had not abandoned the idea of a closed MX-5.


In 1998, the second generation MX-5 was introduced. Four years later, at the Tokyo Auto Salon (the show for tuning, performance and customization in general) Mazda unveiled the RS Coupe and Cosmo 21. 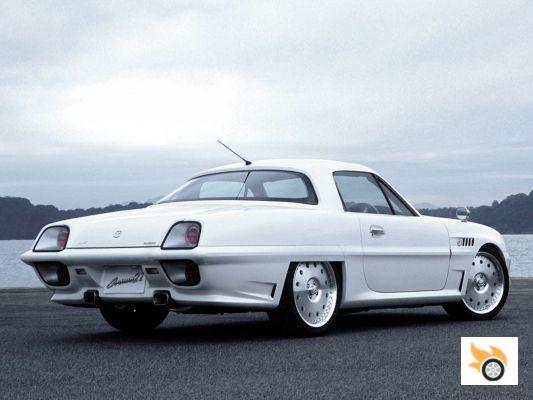 The RS Coupe was a realistic new take on an MX-5 Coupe, while the Cosmo 21 was a show car. The show car was undoubtedly the most spectacular. On the basis of an MX-5 NB the designers had created a homage to the 1967 Cosmo Sport: same elongated body, same double tail lights, fairing front headlights, etc. Even the interior was an ode to neo-retro styling with its 60s-style bucket seats, tiny headrests and checkered upholstery.

The RS Coupé, on the other hand, hid a coherent and production-ready proposal despite the car's apparent tuning. Minus the body-colored lowrider wheels, taillight masks and odd front bumper, the RS Coupe was a "production" MX-5 NB Coupe. 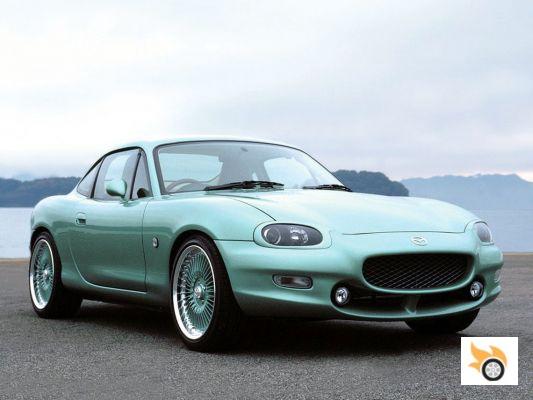 Finally, in 2003, Mazda dared (half-heartedly) to release a coupe variant of the MX-5 where the roof is only 10 kg heavier than the roadster. Named Roadster Coupé, this NB coupé was only available in Japan. The Roadster Coupé recovered the design of the RS Coupé Concept, even recovered the front bumper and lowrider wheels (in some versions) and the masks of optical groups. 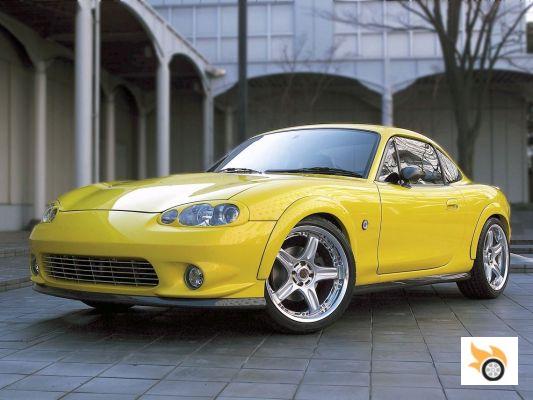 Most of the Japanese clientele, however, preferred the Type S and the Type A. The latter was the most spectacular: wheel arch extensions, rear spoiler, specific front bumper, lower front spoiler and the aforementioned headlight masks.

The Type A Roadster Coupe and Type E were produced in limited production runs of 200 and 150 units, respectively.

In 2004, Mazda re-introduced two concept cars based on the MX-5 coupe: the MX-5 TS, by Trial Sports, and the MazdaSpeed Coupe. The TS was a retro interpretation of the coupe and inspired by the Abarth of the 1960s. Mazda never shied away from looking to European classics for inspiration, be they Lotus or Abarth. The MazdaSpeed Coupé, on the other hand, was a proposal intended to showcase MazdaSpeed's catalogue of high-performance parts based on the Type A for the MX-5 roadster: body kit, 1.8-litre turbo engine, high-performance brakes, etc.


In 2008, on the basis of the third generation, Mazda abandons the idea of an MX-5 Coupé by introducing the MX-5 Roadster Coupé (it recovered the name of the Japanese coupé of the previous generation), i.e. the MX-5 with retractable hardtop, thus succumbing to the fashion of the coupé-coupés of the time. Interestingly, this is the era of MX-5-based concept cars with radically open bodies, such as the SuperLight (windscreenless speedster body and reinterpretation of the 1991 Miata Speedster Concept) or the 2011 MX-5 Spyder (a concept identical to the 2011 Porsche Boxster Spyder). 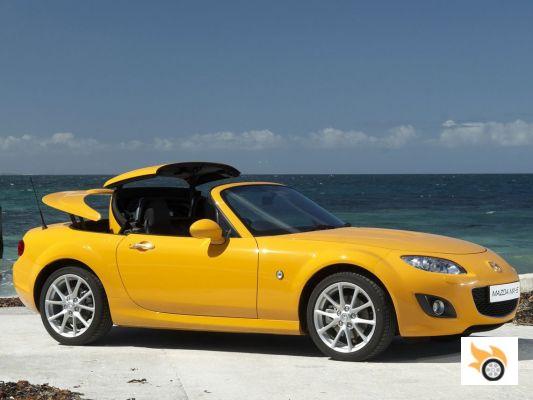 Going back to this year's Sports Car Concept, I can't help but think that having been born as a roadster, the MX-5 would make an excellent coupe, as the roadster's innate stiffness would be an undoubted plus for the coupe. In fact, there is talk of a possible new MX-5 with a hardtop for next year (either a retractable or coupe type, standard or as a concept car). As for knowing what the "RX-9" will actually be and what its future will be, bets are being taken.

And they say old cars are dangerous. ❯

add a comment of How about an MX-5 Coupe as a Mazda Sports Car Concept?