It also helps that it's been called the "Golf" since 1976, even though it's now in its seventh generation. The Golf's rivals have changed their names over the years, except for the Corolla, which, to tell the truth, no longer competes with it. That affection has been reflected in figures, according to the brand, 6,500 people attended and 1,500 Golf GTIs of any age came to the circuit. It was a miserable day, with rain and mud in the parking lots, maybe more people could have come.

I was invited, like many other journalists, not only to be there, but also to do some laps with the Golf GTI Clubsport on the track. As this is something you can't do every day, it was a proposal that couldn't be refused. 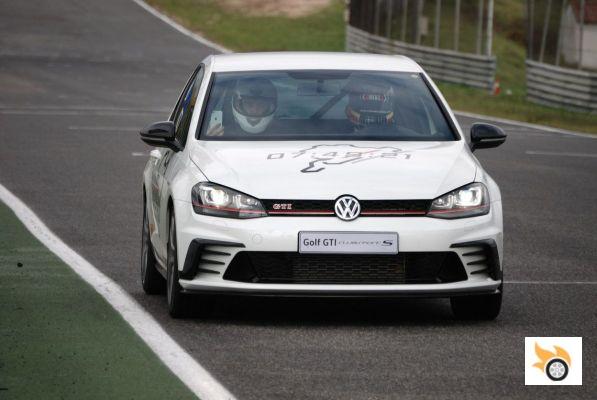 The Golf GTE, Golf GTI, Golf GTI Performance and Golf GTI Clubsport were on track almost all day for customers and guests, plus a Golf Clubsport S (the new FWD king of the Nürburgring) that was at Goodwood this summer, and there will only be 400 units. The latter was passenger only, but with a professional driver at the wheel. It wasn't a day to get too excited, those of us who have been to Jarama in the rain know that.

For years Jarama has accumulated, like any other circuit, rubber debris on the ideal track, as the tyres of the cars that go fast or brake wear out. In the dry, rubber+rubber is synonymous with grip, but in the wet, rubber+rubber is synonymous with a scare. That's why you have to avoid the ideal line of the curves, and as it's obvious, you can't go to attack times, and even less with several cars on the track at the same time (and with drivers of very different levels).

I finally get into the Golf GTI Clubsport and I realize that I had never been in a GTI in all my career, it's one of those models that I have "escaped" by asking for it at the wrong time or prolonged absent-mindedness. But I was already inside. The Clubsport is differentiated by the bucket seats and upholstered in alcantara, the same for the steering wheel. I find the automatic gear lever, it's a DSG. 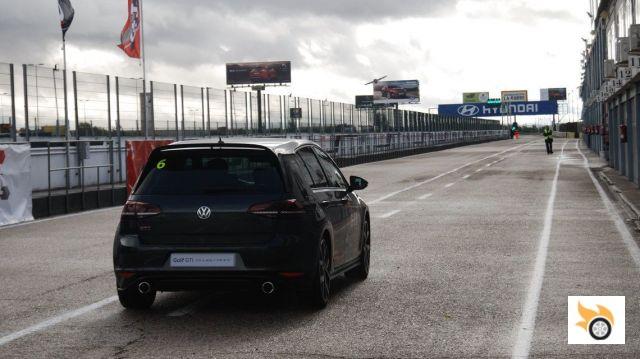 The GTI Clubsport is the second highest model in the range (not counting the Golf R), with a boost to 265 hp and - for a few seconds - an extra boost to 290 hp. With those figures, in theory it's 0-100 km/h in 5.9 seconds and 249 km/h top speed, a little better than the manual. On the outside it is identified by the more aggressive bumper, the 18-inch wheels (which can be 19″), the rear diffuser with dual exhaust outlets and the larger spoiler.

The fifth generation Golf GTI delivered 200 hp, that's a significant jump, and it doubles the power of the fourth generation.

When I get in the car I quickly look for the oil temperature data in the computer, and it was about 110 degrees, a very moderate value considering that it has been running on track, although the last half lap is always cooling and it goes very smooth. With the "Sport" mode activated, which makes the automatic gearbox work in "S" and not in "D", I get on track. I avoid the ideal line as much as possible because it's slippery.

Four years ago I drove my private car on this track in similar conditions, and I was extremely careful. The area without rubber has a grip very similar to that of a good road, but stepping on rubber is almost like stepping on a sheet of ice. In an old car, which no insurance would have replaced in a crash, and without electronic aids, I needed to be very careful. Not so with the Golf GTI Clubsport. 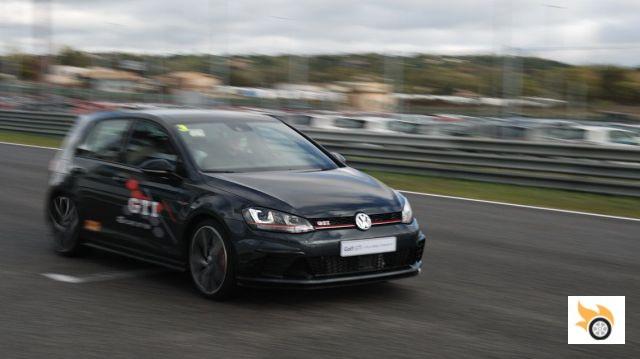 It's surprisingly easy to drive, the slipperiness aside, it's grippy, the brake pedal is very precise and the steering is informative as far as it needs to be. In other words, to be more informative it would have to be a bit more uncomfortable. A Golf GTI isn't radical, it's a car that can be driven on a day-to-day basis like any other compact car, no back-breaking suspension, no excessive noise or vibrations.

Logically, semi-slick tyres were not an option in that weather, so the organization put conventional (high performance) Continental tyres. Without stepping on the accelerator in almost any turn (no need to), the car turned out to be very noble and fast at the same time. When I stepped on the rubber, I noticed a punctual aquaplaning that ended as soon as the wheels touched only asphalt and water again. The stability control only had to intervene there.

First pass through the finish line, I reached almost 200 km / h, between that I could not get out of the last corner on fire (on the outside leaves falls, in the line the rubber slips) and that I can not hurry the braking as in a dry day. If not, I think I could have easily reached 230 km/h. If memory serves me correctly, I think I manually activated a high gear before the time and that made him accelerate less.

Having more control over where to pass and where not to pass, I start to have more fun, hurrying a little bit, as much as the accompanying instructor allowed me. When you're close to the "dot" in the rain it's great fun to drive a front-wheel drive car at Jarama, I can attest to this with the Alfa 147 Q2 (2008) or the Peugeot 308 GTi last year. I didn't need to switch off the traction control, it didn't get in the way and I also have a mechanical front locking system that can deliver up to 100% of the torque to a single wheel. In the dry it could have been on fire.

There's little to say about the DSG gearbox at this point, it's a joy even on the track, you just have to know when you can downshift with the paddles and when not. Sometimes automatic transmissions are criticized because they don't allow absurd downshifts. The 2.0 TFSI in the GTI Clubsport doesn't like to go above 6000 RPM, it tends to change soon after. The fast-revving naturally aspirated cars are a completely different story.

Feeling of speed? Just enough, it's such a comfortable car that it doesn't feel like you're going that fast. In fact, this car is quicker than mine, more power and lighter, but I'd say I'd be more aware of it if I was on fire in mine. I know, the comparison between a 2016 sports compact and a 1990 grand tourer is pretty absurd, but it's to benchmark. 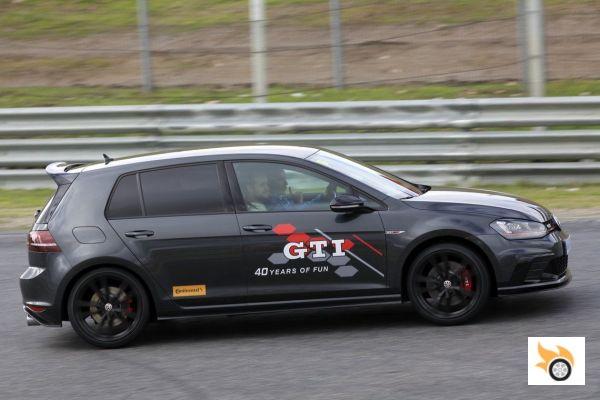 I would have liked to have a thick steering wheel, so typical of BMW, or larger paddles to be able to operate them comfortably when cornering. I complete the comment on ergonomics by saying that the seats convinced me for comfort and grip at the same time. There are cars with this kind of seats and they are more uncomfortable or less usable for people with a wide back (which is not my case).

Not a single symptom of fatigue in the brakes, nor typical noises caused by overheating. The tyres were new that morning, so their performance was adequate. Nothing to criticize from my side. But wearing the semi-slick ones at Jarama, with a good front locking system, would have made a big difference.

It's time to cool down, and at the height of the Bugatti curve, and quietly to the box. The co-driver, an old acquaintance from other events, tells me that I've gone faster than other people, it will be the habit of knowing the circuit, the first time was nine years ago. The car became sweet and refined, sure I could have left the circuit with the feeling of taking a more conventional Golf, but of course, with many more vitamins and hours of gym. 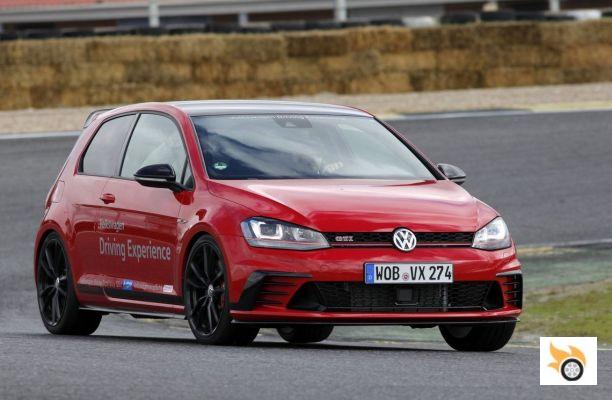 The preliminary feeling, and considering I couldn't exactly put the car through its paces, is that I liked it. Good tuning, a convincing sports car, but maybe a bit low in sensations. With a naturally aspirated Honda Civic Type-R (KA20), even if it was slower, I would probably have had more fun. The Golf GTI Clubsport is not a car for "burnouts", whoever buys it will surely change something to feel it a bit more.

I get out of the car and meanwhile the party goes on. Music from different eras is playing in a tent that shelters from the merciless rain. Queues of people waiting to drive the cars, taste the sausages of the brand or attend the parking show in minimum spaces of the German driver Ronny Wechselberger. By the way, what this man does is to take off his hat, he put the Polo wherever he wanted to the delight of the improvised co-drivers.

The Jarama Circuit was the only place in Spain where you could be sure that all the cars with the "GTI" badge really were GTIs. In fact, I saw only one Golf GTD, it was in the used models area (Das Welt Auto), in the end it was a diesel. For reasons of political correctness it wasn't the time to talk about the goodness of the petrol GTI, without Dieselgate I say they would have brought it. 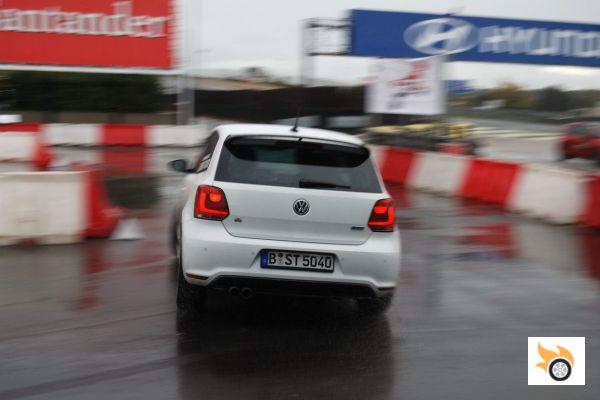 Before leaving I take a walk around the paddock and contemplate the cars in sight. The overwhelming majority were second generation Golf GTIs, the one I might buy one day as a classic (preferably the 16 valve). Many drivers were younger than their mounts. Old rockers never die, they say. There were also some rare models on display, like a racing model or the very exotic crossover based on the second generation with all-wheel drive.

The seven generations paraded in the rain in the temple of speed in Madrid.

Right now a GTI in the C-segment is a more or less common thing, each brand calls its equivalent as it wants (and if there is one), but in 1976 things were not like that. If you look at the models we have been analyzing in our last reports, the one with 100 hp could be considered privileged, and cars that needed more than 20 seconds to reach 100 km / h were promoted as "with nerve". Their descendants can go full throttle, but behave like docile, usable cars all year round.