Heel toe, a technique that is not only for "freaks". 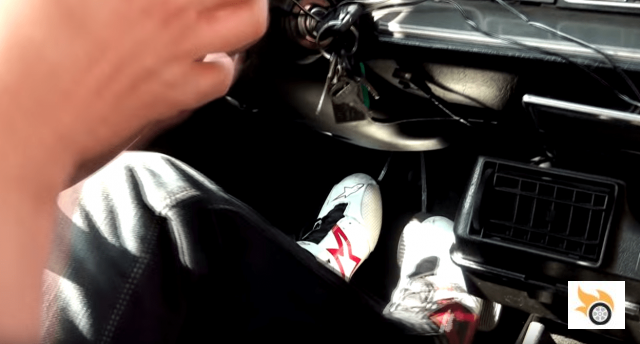 Interestingly, in the comments of that post, one brave person said that "toe-tapping is for freaks, who are the ones who cause accidents". Not only were we shocked by the statement, but we realized that many people didn't really realize the benefits and objectives of performing a good "punta tacón".

Fueled by that comment, we already had the idea of doing a small article about this technique. But it was this week when, after a series of Tweets from some friends in the sector, we realized that we really "rushed" to talk about this topic.

Although some people think it's "crazy", the reality is that knowing how to execute a good "tip toe" is something that helps to better control the vehicle when braking.

Although many of you will already know it, and some of you will practice it, let's go from the bottom with this technique.

What is heel toe? Heel toe is the technique of hitting the gas with the back or heel of your right foot while downshifting and braking at the same time. Literally, it is acting on all three pedals at the same time.

What's the point? Well, this deserves a technical explanation, a very basic one. Let's suppose that a car is driving at 120 km/h in fourth gear. We find ourselves in a third gear curve. It's time to brake, so we move our right foot from the accelerator to the brake, and begin to slow down.

At eighty per hour, to say the least, we decide to downshift to third gear. At that point the engine is engaged to the drive wheels, say, spinning at 2,600 revolutions per minute just before we engage the clutch.


While we change gear, let's say we lose 5 km / h more based on the brakes. When we already have third gear engaged, it's time to release the clutch. To match the speed of the wheels with the engine, the engine should now turn at 3,500 revolutions per minute (considering the fourth gear 30% longer than the third).

While we have had the car disengaged, the engine has slowed down, and now it is idling at about 800 rpm. It is therefore necessary to couple the engine to the gearbox, whose shafts are turning 2,700 revolutions faster every minute.

But if we have our right foot on the brake, we can't execute that "touch" of gas.

Most drivers do this by progressively releasing the clutch in these circumstances. This has several drawbacks. The first and most logical is that the clutch wears out, as it has to compensate for the difference in speeds, with some slippage.

If you like driving, you'll become addicted to toe-tapping as soon as you master it.

The second is that shifting takes a long time, as we have to release the clutch very gently to avoid jerks. Of course, if we are in a hurry to brake we can't waste time with a "sweet and slow engagement", so most of the drivers what they do is to release the clutch suddenly, which makes the car jerk, the bearings and silent blocks of the engine suffer, the bearings suffer, and even, if the car has a lot of torque, the wheels can block for a moment, while the whole motor-propulsion group suffers.


It may seem "science fiction", but this is what happens in real life, and it is the cause of many of the technical problems that we see in cars over the years (bearings, bearings, clutch, silent blocks, gearboxes with accumulated "stress" ...).

The solution to these problems lies in the execution of the toe heel.

Although it is a technique that in the past had to be used "by force" due to the need to double clutch (another technique in disuse that someday we will talk about here), now it is no longer "mandatory". The standardization of synchronizers has taken away the need for double clutching, but not the need for toe clutching.

Surprisingly, I remember a presentation of a car where, after complaining about the position of the pedals, which prevented toe heel, the head of communication of the brand asked the journalists who were there how many of them did toe heel, to find only three people with their hand raised among more than fifty. And this, my friends, is a problem.

But how do I do it? The heel-toe technique is not easy to learn the first time around. It all boils down to the fact that when we are braking relatively hard (for example, on a motorway lane exit, or on a winding road heading into a sharp bend in a pass), we have to fully depress the clutch, downshift with our hand, and just before we re-engage the engine and gearbox by releasing the clutch, hit the gas with the back of our foot to rev the engine up to the revs that our engine will now need to synchronise with the gearbox speed.

But like any technique, it needs practice, and to know how much gas you have to give to couple the revolutions well. Because if we are too short with the touch of gas, when releasing the clutch suddenly we will have a pull, even a wheel lock. If we stay too long on the gas, we will jump forward, with a jerk and suffering for the car.

Of course, you have to learn, and to learn you have to make mistakes, and repeat the manoeuvre ad nauseam. In the courses in which I have participated we taught the technique with cars from the school (which no longer exists, by the way), and we spent time on the track so that people could learn progressively before practicing with their car.

That's why I advise you, if you have the opportunity, to sign up for a driving techniques course and ask specifically to be taught how to do a heel toe.

As soon as you get the hang of it, you will discover a whole new world. You will get much more stable braking, you will get more powerful braking, by using the engine retention, without abusing the brakes so much, and you will drive your car more by hand.

But no, "going on the attack" is not the end of the story. In the event of emergency braking, with dodging, in the case of roundabout entrances and approaches, exits on the exit lanes of fast roads, motorways and highways... all these places will ask you to "toe the line" to a greater or lesser extent. Until the day comes when you don't know how to live without applying the "gas pedal", especially if you drive a car that has a good exhaust system to enjoy the "gorgorito" of the reductions.

Believe me, it's one of those things that any lover of spirited driving should have in their driving repertoire. There are other articles to talk about the driving position, how to tighten the seat belt, how to grip and move the steering wheel, or how to do backward braking, but today we'll leave this for today.

add a comment of Heel toe, a technique that is not only for "freaks".