Diesels with SCR will eventually become the norm

Once the gases leave the exhaust manifold, before being expelled to the outside, manufacturers have two methods to reduce NOx:

There are manufacturers that have "just seen the light" with SCR technology, but it's a few years old now. The first car I drove with this system was the Mazda CX-7 2.2 CRTD, which needed this solution to meet Euro 5 regulations in 2009. Mazda was the first Japanese manufacturer to use SCR, but it wasn't the first. The patent is over 50 years old, and has a long history in boat, truck and bus engines. 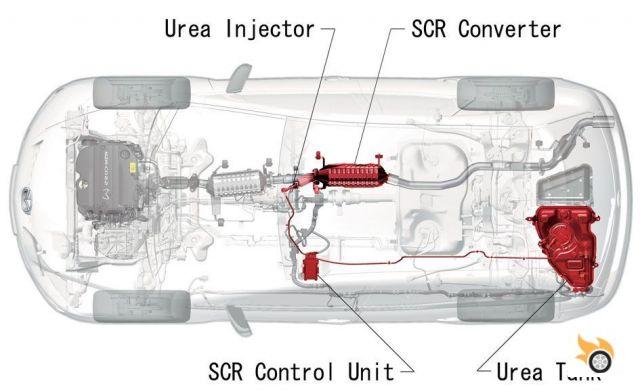 As early as the Euro 6 generation, the PSA Group (formerly PSA Peugeot Citroën) bet heavily on SCR technology, launching BlueHDi engines in 2013. In a recent press release, they boasted of having produced one million engines with SCR. The same manufacturer introduced maintained particulate filters (aDPF) on the Peugeot 607 in 2000 to meet Euro 3. According to PSA, 99.9% of particulates and 90% of nitrogen oxides are going to hell thanks to these two technologies.


The latest manufacturer to join the SCR party has been Ford, after presenting the EcoBlue engines, which will replace the current 2.0 TDCi. Diesel consumption is reduced by up to 13% (due to less mechanical friction), and will have versions that will exceed 200 hp. And let's not forget that Volkswagen announced in October that all TDIs will run SCR in a short time, and that announcement came days after the Dieselgate scandal exploded. Currently some models with TDI engines have SCR.

How nice of the manufacturers to care about the environment, right?

Wrong. They care about Euro 6c in 2017, and the entry into force of homologations with real road tests to measure NOx emissions. Although the legal limit will rise from 80 to 180 mg/km of NOx - since 80 grams is almost unattainable without cheating - NOx must be reduced at once. It is no longer just a question of aesthetics, it is going to be mandatory. And in 2020 the limit will drop to 120 mg/km.

For years manufacturers have been repeating the same song: LNT is more than enough for small and medium-sized cars, and only large cars and SUVs really need SCR. If SCR technology had been mandatory for the Euro 6 generation, European skies would be much cleaner. According to data from the consultancy Frost and Sullivan, only 8% of tankers sold in 2014 were equipped with this type of exhaust aftertreatment.

For the customer, SCR is a little less comfortable

Truth be told, users of diesel engines of this type have to get used to the fact that they have to check how much urea they have left in the tank from time to time. This additive can last for about 10,000-20,000 km, depending on the conditions of use, and the internal tank may need to be refilled before the service interval recommended by the manufacturer. The additive is not expensive, that's not the problem. The problem is that when you run out of urea, the engine won't start, because otherwise it doesn't comply with anti-pollution regulations, and you have to fill it with urea by force.


Let's see how it works. First, the urea reacts with the water in the solution, generating ammonia and carbon dioxide:

Then, that ammonia reacts with nitrogen monoxide (NO) and nitrogen dioxide (NO2) to give water vapour and pure nitrogen:


The diesel engine is not clean, it can only be clean if it uses a chemically perfect fuel and in the absence of nitrogen. In the real world that is very difficult, but with post exhaust treatments you can make up for it. Like it or not, diesel engines are still very necessary and in most segments they account for more than half of the sales. In theory SCR technology does not affect reliability, as the additive is added to the already burned gases, the only potential problem is that the additive is emptied or the sensor that measures its level fails. Otherwise, SCR is a necessary evil, and anyone who is the least bit concerned about the environment should rule out buying any petrol car that doesn't have it as standard.

It is possible to fit SCR to a car that didn't have it as standard, but it is very complicated, though not impossible. This technique is the most effective so far to sand NOx emissions, which are killing more Europeans than traffic accidents, only this does not appear in the news. That's the thing about silent deaths, they do not make noise.

Are convertibles only for the summer? ❯