In two years the brand has refreshed its entire range, but with nuances. Only the Crafter is a 100% new model, the rest of the range is based on platforms that are already a few years old, and the most obvious case is the Caddy, which takes almost half of sales. This is not to say that having old platforms is a bad thing, it's just a nuance. Moreover, the new Crafter has nothing to do with Mercedes-Benz or its Sprinter, it is now 100% VAG, and even has a pure clone, the MAN TGE; they only change logos.

The entire range now complies with Euro 6, in compliance with European legislation.

Many readers will wonder what Pistonudos is doing in a presentation of "furgos". To understand it, just a simile: a Zastava Yugo and a MINI Cooper are both passenger cars, but with a considerable leap from one to the other. In industrial vehicles there are also levels and levels, not to mention the pistonudos who drive these things for work or any other reason. Testing a commercial vehicle doesn't have to be boring, on the contrary, just think back to last year's test of the Volkswagen T6 (Transporter and Caravelle). 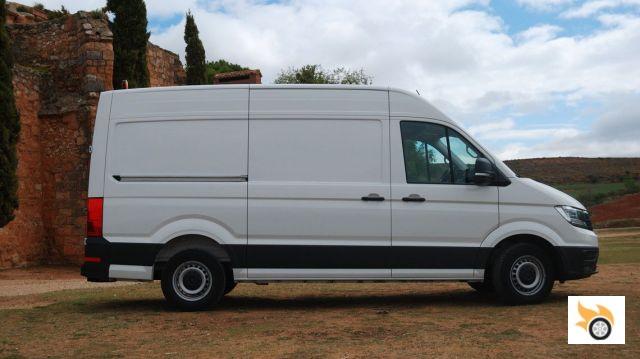 The fourth generation of the Crafter is 100% VW again

The novelty with a capital C is the Crafter, which had already been presented in Almeria in November. It is a project that the Volkswagen Group has started alone, going so far as to build a factory near Poznan (Poland) just to manufacture this model. Well, I'd better correct, 80% Crafter and 20% MAN TGE. It may look like just another industrial vehicle, but it has technologies that until recently were exclusive to passenger cars.


Right now most of the technologies available from the Group are available for the Crafter. I'm talking about safety systems such as forward collision detection, multi-collision braking, lane keeping assistant, parking assistant with blind spot monitoring, infotainment systems as standard (the brand claims that 8 out of 10 customers are interested in connectivity), adaptive cruise control with front radar, trailer manoeuvring assistant, etc. For example, with the blind spot assistant you can move a 5-metre bug and park it first time, in reverse, with a minimum of patience. It even has a parking camera above the tailgate, very useful!

The Crafter has 69 - quite a number - body, engine and transmission variants, with front and all-wheel drive being new.

At the wheel the Crafter doesn't behave like a typical van, and I've driven a few of them, empty and fully loaded. Until you take a curve at the same pace as a car you don't start to notice the inertia, although with white paint it's very good for its dimensions. The engine tested is the 2.0 TDI twin-turbo 177 hp, it pulls as if it were a three-liter in line older, it doesn't lack strength... yes, with the empty box. Loaded to the max with 140 bhp it should move decently, with 177 bhp with ease. The basic 102 hp version is designed more for those who need a lot of volume but don't carry a lot of weight, especially couriers. Consumption was around 8.5 l/100 km at a legal pace, 100 km/h or less. 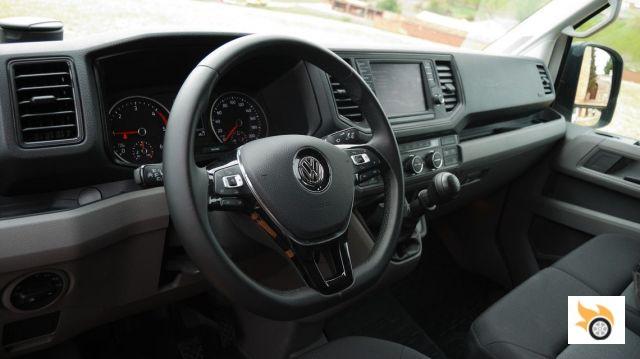 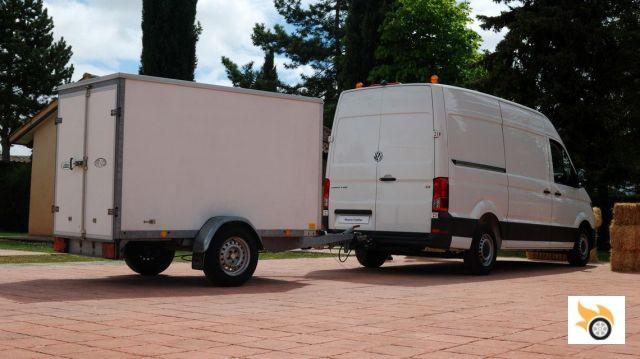 The driving sensations are very pleasant. The normal seats already have a good degree of comfort, but there are optional sports seats recommended by the German Association for a healthy back posture (AGR), with electric lumbar massage. The 100% industrial version has a very nice dashboard, full of holes to drop anything and do not go stumbling, with good adjustments and insulation worthy of a minivan. I can attest that 15 years ago this could not be said of any van -as far as I know-.

The power steering is electromechanical, a novelty in its category.

The future of the Crafter includes front-wheel drive, all-wheel drive and rear-wheel drive versions, with manual or automatic transmission, up to a maximum of 5.5 tonnes of gross vehicle weight and 18.4 cubic metres of volume. For the Spanish market FWD versions will be the most interesting for the volume available, the Crafter / Sprinter did not have that possibility. A 100% electric version is expected next year. Later there may be a motorhome version; according to Roger Osca, product manager of T6 and Amarok, "it makes sense a motorhome Crafter". That and a "no" are a long way off.

At the moment the brand has already noticed a pull of registrations of the new model compared to the one shared with Mercedes, although they have not liquidated all models in stock. Gradually new versions will appear for special customers, such as ambulances, refrigerated compartment, chassis / cab ... without forgetting the Combi and passenger. With the new production system, the dependence on external transformers has been reduced. For example, the Crafter with all-wheel drive used to be a third-party conversion; now everything is done in-house.

In the medium segment the brand has the Transporter, Caravelle, Multivan and California. The shell is basically the same, but their orientation changes: 100% industrial, passenger, premium passenger and recreational. Three new models have been added recently. The most relevant is the Transporter Mixto Plus, which is for passengers and cargo with a bulkhead to divide both areas. The qualities are fairly simple, but the starting price is 24,460 euros (excluding taxes).

On the other hand there is the Transporter Rockton, designed to move on rough roads: high chassis and all-wheel drive. This version was not available for testing, but a Multivan with all-wheel drive (4Motion) was, with which I was able to test the efficiency of the system on dirt roads. It has very good traction, so with the legs up and the right tyres, it's an interesting option for very specific people, such as adventurous individuals, wind farm maintenance, forestry surveillance, etc. The 4Motion system works with Haldex multi-clutches, in this case you can also lock the rear differential.

In a similar vein is the Multivan Panamericana, which not only has a very tiled interior, it also has a small preparation for off-road driving (suspension raised 20 mm and reinforced) and all-wheel drive. On top of that, there's the 204 hp engine (petrol or petrol) and DSG gearbox; an interesting thing, but with a price just over 55,000 eurazos, ex-factory price! If you're shocked by the price, don't ask how much a California Beach with all sorts of extras costs, you'll get a shock. 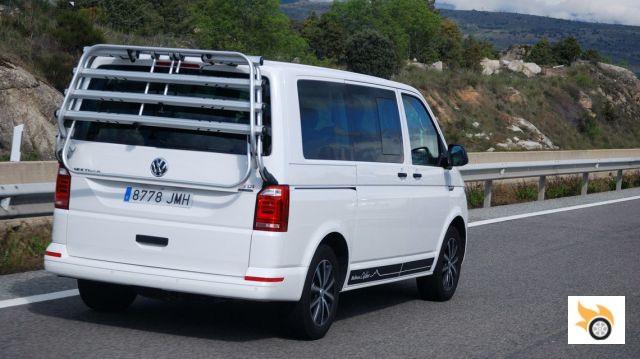 I'm sorry I don't give much more about dynamic impressions, but it was a quick drive and after last year, it's considered more than tried and tested (although it had 140 hp and front wheel drive). With 204 hp and this van you have to be careful with the photobooths, it runs more than it looks, and when you press the "Sport" button you can see a little grown up. Yes, it does, I'm not kidding.

To tell the truth, I enjoyed the tasting more in passenger mode. In vehicles like the Multivan -as well as its competitors in the high passenger range- you travel with a comfort that SUVs, buses and similar would like for themselves. In fact, the brand notes that there are private customers who come to this category because they can't find anything better for their needs in passenger cars. When you need more than five seats for adults and a lot of luggage space, you have to forget about stories: a van will always do the job better.

Right now the Caravelle/Multivan has stiff competition from the trio of vans from PSA and Toyota (we tested the Proace a few months ago). In 2016 it was Volkswagen that was the leader in this category, but so far in 2017 Citroën has taken the baton with its SpaceTourer. Yes, the T6 and derivatives are more expensive, but in the long run you end up noticing the price difference compared to some competitors. You only have to look at residual values to understand this, and see what kind of customer drives a T4 or T5, and who drives generalist competitors. 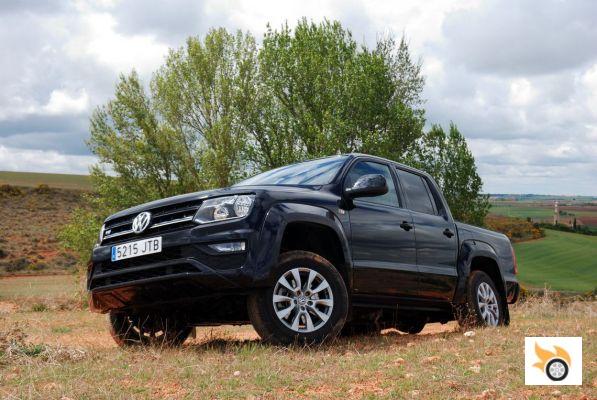 The Volkswagen Amarok stays only with V6 TDI engines

When the Amarok came out I was quite surprised that four-cylinder engines were used, and the market logic has fallen into place. As the overwhelming majority of Amarok sales are outside Europe, downsizing has gone to the dogs. The range now consists of three 3.0 V6 TDI powerplants: 163 hp and 450 Nm, 204 hp and 500 Nm, and 224 hp and 550 Nm. Torque figures are below 1,500 RPM, a four-cylinder can't compete with that.

Even having driven the less powerful version, which will take a while to reach the Spanish market, I have to say that it's surprisingly agile considering how much an Amarok weighs even unladen. Every time I've driven this six-cylinder I've had a very positive impression, and the first time I tasted one I thought it was a slightly odd-sounding petrol. It's a logical choice in this category, and with a mechanical refinement far removed from the inline four-cylinder engines (there are 3-litre and less) of its competitors.

In a lightning test, as part of the planned programme, I drove the Amarok on a dirt track, but on fire. It's impressive how much punishment the chassis withstands without transferring discomfort to the interior. In a way it reminds me of the Touareg, but this one is more imposing. An agile behavior, very easy to master, even makes sense for those looking for a vehicle with unleashed doses of testosterone. Inside, although the interiors are clearly simpler than those of the Touareg, it's quite comfortable compared to simpler pick-ups like the L200, D-MAX or Ranger. As for the fuel consumption, I'd better not say, it's not representative... 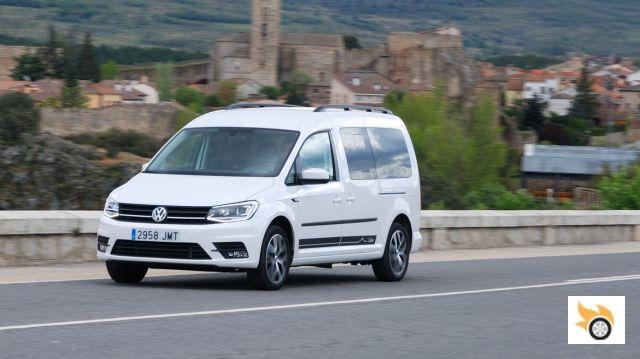 And the Caddy becomes more ecological

Final mention to the Golf derivative with PQ35 platform (generation V). It has a clear feel of tourism, normal, as it derives from one, but that feeling I had very clear traveling in a Caddy Outdoor. As you can see in the pictures, it doesn't have a short wheelbase, it's a long vehicle. As a passenger while my partner was flying low and low, it felt like in a sedan, saving some distances. As a driver, I can sum it up in that I didn't pay attention to what was behind me, many SUVs have a worse behaviour if we go into comparisons.

The engine in question was the 140 hp 2.0 TDI, which is nothing new, but the natural gas version (TGI) is. Volkswagen has finally retired the last LPG engines with the infamous 1.6 8v, which was thirstier than Bacchus at an Alcoholics Anonymous meeting. With natural gas and the 1.4 TSI engine capped at 110 hp allows to move with the maximum possible ecology in this category, excluding 100% electric. It can make 600 kilometers without pulling gasoline, and at a cost much lower than the 1.6 TDI, and is available with both batallas (standard and Maxi).

The Caddy is the only VW V.C. vehicle that can run on gas, the rest of the range uses conventional engines. At least the latest diesels come with their selective catalytic reduction (SCR / urea / AdBlue) to keep emissions at bay, so we can speak little of Dieselgate in this case, the problem is with Euro 5 engines, which are already all liquidated. As the platforms of the entire range are renewed, more CNG, electric and 100% plug-in versions will appear. Some groups, such as taxi drivers, are very interested in this, because the diesel for this segment has a blacker future than the victims of Samuel L. Jackson's Mr. 9 millimeters in Pulp Fiction (Ezekiel 25:17 and that)... 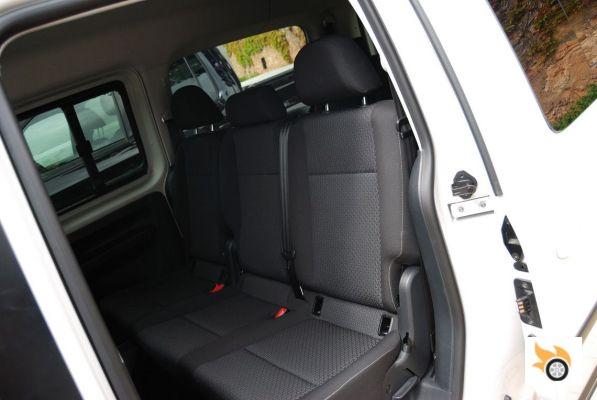 Engine oil change: How often? Here are the details!

SUV, compact, estate or MPV? What a dilemma!

Subaru will continue to make inroads with a refreshed lineup