It is an alternative to the C-segment minivans, such as a Renault Scénic or a Ford C-MAX, despite being derived from a B-SUV segment car. By qualities, habitability, size and other parameters is fully comparable. It also has the added bonus of being a little more prepared for off-roading, due to its better angles of attack and departure (20º and 20.8º, respectively), and a ground clearance of 154 mm compared to the Tivoli's 167 mm.

It is very easy to get in and out, as well as to fit child seats, given the shape of the roof and doors.

While the Tivoli has a capacity of 423 liters to the tray and 1,115 liters abantiendo the second row (with front tracció) XLV increases to 720 and 1,440 liters, respectively. According to the manufacturer, the 720 liters are the result of taking advantage of the double bottom of the trunk and load up to the curtain, which incidentally, is optional. Also optional is the tray that separates the trunk into two spaces if placed in a particular location, both elements are included in a package of 200 euros.

The XLV's boot has multiple hooks for hanging small bags, lighting and power sockets, as well as elastic bands on the sides. Adjustment options are plentiful, although you don't get a completely flat load floor, and be aware that the load opening is still a little high if you're loading heavy items. A puncture repair kit is standard, a temporary spare wheel is optional. Under the floor there is a volume of 146 litres in the most favourable case.

The rear seats can be tilted +/- 5º, in two fixed positions, and are not adjustable in length.

The only notable difference with the Tivoli is that the rear seats have a few more centimetres of headroom, as the roof hardly drops at all. The storage compartments are exactly the same, with room for four bottles in the front doors (two 1.5-litre bottles), a 13″ laptop in the glovebox, or a 10″ tablet in the central storage compartment. In the rear, drinks can be accommodated in the doors, and also by folding down the folding coffee table in the middle seat.


The level of protection offered by the XLV's bodywork hasn't been assessed by EuroNCAP, nor has that of the Tivoli. We have the reference from KNCAP, the equivalent body in South Korea, which assessed the Tivoli (see video). The test procedure is not exactly the same, the frontal collision is with 100% overlap, the programmed deformation structure works optimally. It can be seen that the car resists the impact with a lot of dignity, it seems that the doors could be opened. The score obtained was 91.9/100, i.e. the safest in its class. 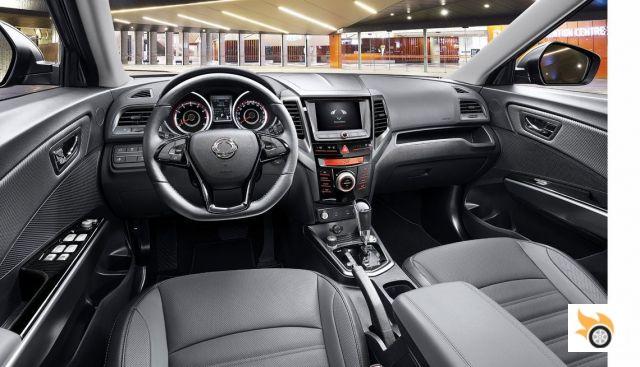 The driving position is unchanged from the Tivoli, the steering wheel still lacks depth adjustment, but you can adjust the height of the driver's seat (except in the XLV Line) and the height of the seatbelt. In my case I have to keep my legs a bit more bent to be close to the steering wheel, but I don't find it uncomfortable. By the way, you can choose three modes of steering hardness, but in any case it's a bit soft. The instrumentation, although a bit old-fashioned, is very readable, and can be customized with six background colors.

The SsangYong XLV has the same engines available as the Tivoli, a naturally aspirated petrol with 128 PS (G16) and a turbo diesel with 116 PS (D16T), plus an LPG version that will come later. All engines are chain-driven and are not shared with other manufacturers. Despite the weight increase from one car to another (35-50 kg), the gear ratios are exactly the same. In the XLV the final reduction is shorter, so the higher weight is compensated and the performance is more similar. The downside is that it consumes more and is a bit more revved. The D16T is rated at 4.5 l/100 km with manual gearbox and 5.9 l/100 km with automatic gearbox. The G16, meanwhile, should settle for 6.8 l/100 km.


The six-speed manual gearbox comes from Hyundai, the automatic (D16T only) is provided by Aisin.

The version tested is the D16T with manual gearbox. Overall it is a pleasant engine to use, with a willingness to push, and that can move very decently the whole, at least with two occupants. With the diesel engine it is capable of pulling a 1,500 kg trailer with brakes, or 500 kg without brakes, while the petrol engine can only pull a one-ton trailer with brakes. You don't have to use the gearbox too often to make it come alive, it drives like any conventional MPV, and despite its looks, it doesn't reach 1.5 tonnes in running order. 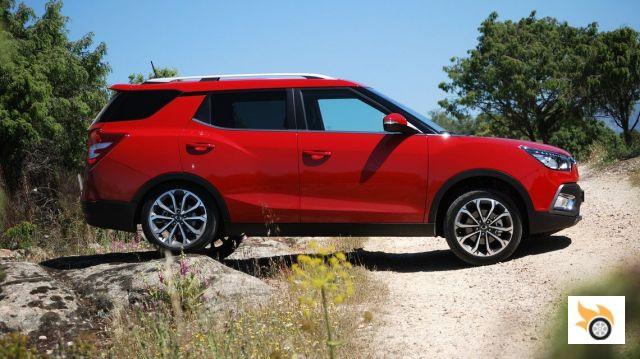 From 120 km/h, sixth gear already has the engine revving at over 3,000 RPM, so fast cruising lets you feel the engine in the cabin. The engineers have preferred the XLV to recover well, rather than have lower fuel consumption at the cost of choking the engine with a development that stifles it. As for fuel economy, it wasn't exactly low. On a route with a secondary road and sporty driving, it exceeded 6 l/100 km, but to other companions -who would go to table- the average passed 10 l/100 km.

Going into technical details, the Tivoli and XLV have the same brakes, 298 mm diameter ventilated front discs and 284 mm diameter solid rear discs. According to the manufacturer, they can stop the XLV from 100 km/h to 0 km/h in 42.5 metres. The suspension architecture is also the same, with a McPherson strut at the front and a torsion beam at the rear axle. The ride is comfortable, but it holds the body very well when cornering hard. The all-wheel drive XLVs, which exist but won't be imported to Spain, have a multi-link rear axle, like the Tivoli 4×4. In fact, the XLV happens to be the only SsangYong that can not opt for all-wheel drive in our market, but the demand for that feature in minivan segment is almost nonexistent.


Otherwise, the details observed in driving the Tivoli are applicable to the XLV. I am not able to determine notable differences in behavior of one or the other. The XLV should be a bit more settled in the back because of the extra weight, and because the body is a bit closer to the ground: it's a bit more touring. However, look at the photos with the rear suspension very articulated, it's several centimetres short of the right side wheel butting up against the fender. We are not talking about a pure tourism, technically it would be a crossover. Between the different rims I have not been able to establish differences having driven for a short time the model with 16″, yes, in any case the tires are 100% for road use, they are not mixed. 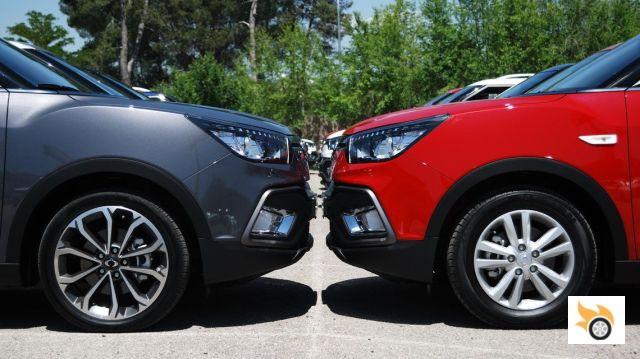 The Limited, the most equipped, add the heated steering wheel and gear knob in synthetic leather, electrically folding mirrors, heated seats, sunroof, knee airbag for driver or light and rain sensors. The navigation system includes SD card mapping. In the Tivoli Limited the steering wheel can have a coloured leather insert and a more "reshulón" interior, but not the XLV. It is only available as diesel, manual 22,000 euros and automatic 24,000 euros. 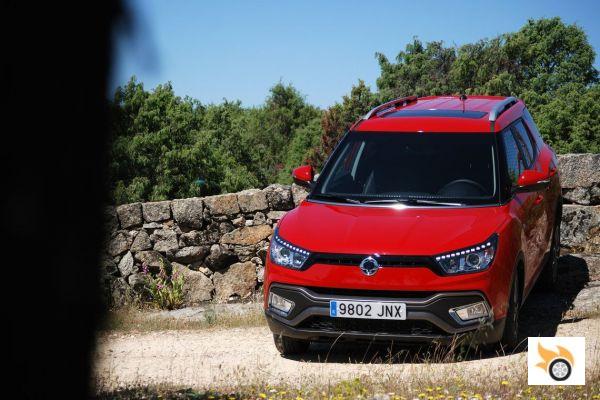 All prices include current promotional discount of 2,000 euros or more. The jump there is in the manual versions to the automatic is partially explained by taxes, as the automatic pays 4.75% IM, and the manual does not. The cars can already be purchased in the dealer network, and have five years warranty or 100,000 kilometers.