The Ignis is an interesting model because it doesn't replace any other model, i.e. it won't lose the Jimny, which in its next generation will still have a gearbox with a reduction gearbox. The Ignis can be either a front-wheel drive city car or a pocket-sized all-wheel drive (AllGrip) SUV. In fact, in markets like Italy and Germany they are selling more 4×4 than expected, as few people choose all-wheel drive in crossovers.

Besides being a visually tall car, it has a very generous ground clearance, 180 millimeters, like the Jimny and the highest that can be found in much larger SUVs. The space is very well used, because it is only 3.7 meters long, but can accommodate five four occupants and a luggage of up to 373 liters without having to fold the seats. There's a trick to this, but it's a good trick. 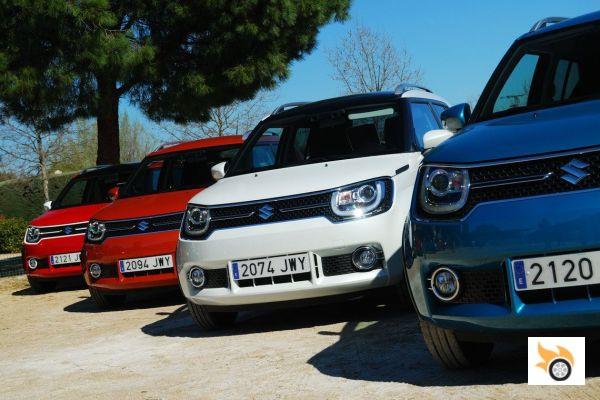 One of the reasons the Ignis may end up beating the Celerio is its cute factor. The range will feature 14 colours, five of which are two-tone (colour/black on the roof). If this wealth of colours is not enough, there are various accessories to personalise it a little more, such as coloured edges for the headlights and grille, rims with a coloured spoke, etc. Those responsible for Suzuki Ibérica could not specify how many combinations can be, let's leave them in quite a few.

On the other hand, it does not have a cheap utility complex, because the basic version will not come to Spain or Portugal; you can choose the GLE or GLX, with considerable equipment. The lowest list price is 11,200 euros, but that implies financing the purchase, otherwise it stays at 12,200 euros. It falls a little short of cars like the Ford Ka+ or Opel Adam, but it's the Celerio that competes with them.

With manual gearbox can have the option of semi-hybrid system (SHVS), which for 800 euros allows a saving of gasoline that is recovered relatively quickly and is labeled as "ECO" by the DGT. It is therefore the cheapest hybrid you can buy in Spain. As an option it has a five-speed Auto Gear Shift (AGS) gearbox as well. Neither the hybrid nor the automatic can opt for all-wheel drive. 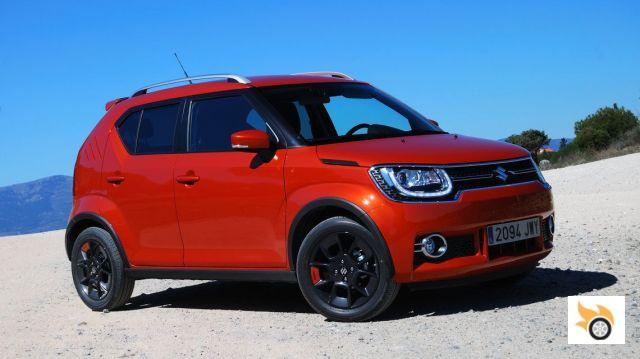 The Suzuki Ignis is a lively utility car in the sense that it weighs very little, based on the Baleno platform and weighs between 810 and 905 kg in running order. The 90bhp K12C engine is naturally aspirated and mainly at high revs. No one will find it a fast car or that recovers fleetingly, of course, but it has the advantage that it wastes very little fuel without amputating one or two cylinders or fitting Stop&Start. It's an exercise in intelligent engineering: if something works when it's simple, why complicate it further?

The fuel consumption rating ranges from 4.3 l/100 km for the semi-hybrid to 5 l/100 km for the 4×4, really low values that exempt it from registration tax on all versions. If the on-board computer doesn't lie through its teeth, it's very easy to get averages close to 5 litres (or less), and consumption in the city remains contained even with all-wheel drive. And when driving in diving boots, with the accelerator pedal on the floor, the fuel consumption is still very reasonable, although the speed penalizes it for being high.


It's designed for the city and its environs, but it can handle motorway and dual carriageway driving with dignity without having to constantly downshift to fourth gear, at least with a passenger. If we take it out of its habitat and put it on curvy roads, we will notice that the rear axle is a bit naughty and that the reduced width of the tyres doesn't make it very suitable to go to the knife. However, when it rains or snows, this will be an advantage for it, and it will pass much better than SUVs with much wider tyres. With winter tyres it will go through snow with enormous agility. The tyres are Bridgestone Ecopia road tyres. 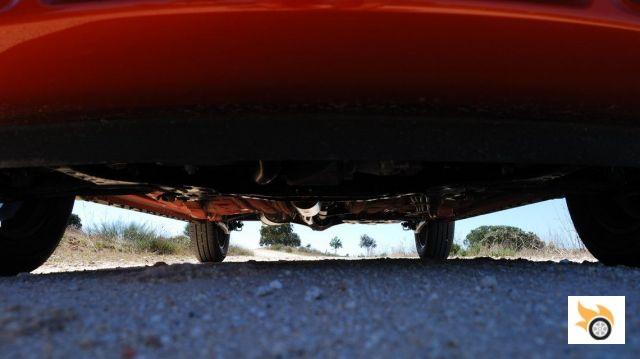 Before we go on, it's worth mentioning what its all-wheel drive system is like. It's a rear-axle engageable system, and when a loss of traction is detected on the front axle, the rear axle engages. The operation is completely transparent to the driver, who can do nothing to change its operation: it is always in 4×4 Auto mode. It does have downhill assistance, which keeps the forward speed contained to descend ramps safely in a rural environment.

With all-wheel drive, the rear suspension is not a single torsion beam, it's a multi-link.

Suzuki prepared a route with some very nice roads in the Madrid region, but I skipped it on time to get into a dirt track that I know and was on the way. There I took the opportunity to put the AllGrip system in trouble -or try to-. It's a bumpy track, with sand and pebbles, accessible to any car, but it makes the suspension work. I was surprised at how easily I got over the bumps without breaking my spine, the chassis is robust enough for that.


As there was non-existent traffic, you could corner a little quicker than advisable, so we danced a little crunchy. In other words, it tended to skid off the rear axle, but it's very easy to correct that with the stability control on. Driving on dirt at 50-60 km/h with this car is great fun and would change your perception of it a lot. No, it's not an umpteenth off-road hatchback, without reaching the level of the Jimny it's got enough off-road guts. By the way, by releasing the clutch pedal suddenly with the revs at full throttle it's incapable of getting off on tarmac (it has no power), but on dirt it is capable of getting off nimbly with all four wheels because they can slide. 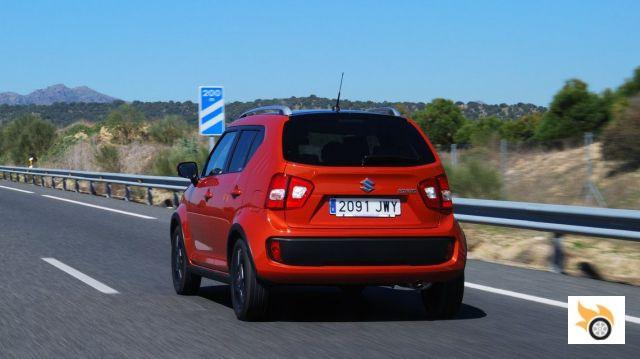 Ignis drivers will appreciate the slightly elevated driving position, which provides very good visibility due to the dashboard design and flattened bonnet. The power steering, with plenty of gear reduction, is pleasant in heavy traffic and for manoeuvring: its turning radius is 4.7 metres. On the road it feels indirect and not very precise, but this is appreciated off-road. For example, in the short rally on gravel, I preferred the steering to be like this, but not on the road.

As the body is a bit high, it doesn't invite you to go fast in bends because it tends to sway. If it wasn't for the brilliant interventions of the stability control, it would be better to drive more calmly. The ESP is effective considering that the rear brakes are drum brakes on all versions, remember that drums are less precise in braking, but for light and economical cars like the Ignis they are an acceptable solution. I tried to do 120-0 km/h on a winding road and I found the result satisfactory: it brakes well and quickly.

When the engine is revved up it is sufficiently agile, has the character on top, 90 hp at 6,000 RPM and maximum torque of 120 Nm at 4,400 RPM. At low and medium revs it will seem sluggish compared to a turbocharged three-cylinder, but if you know how to use the gearbox it goes decently. It is able to comfortably exceed 120 km / h, but it starts to cost him, the laws of aerodynamics are what they are. The automatics don't have the same gear ratios, they are a bit shorter. In the worst case it accelerates to 100 km/h in 12.2 seconds, the top speed dances between 165 and 170 km/h. 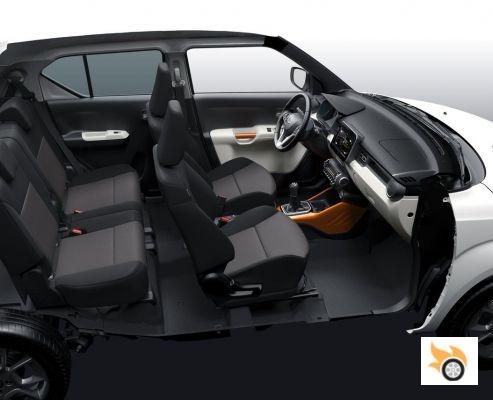 It doesn't look like the most powerful car in the world, but it has other advantages. Inside we find generous space, with these proportions is easier to accommodate passengers. The rear bench can be adjusted in length, allowing more relief in the rear seats (260 liters of trunk if it is FWD or 204 liters if it is 4×4) or maximizing the trunk volume (373 liters). If you find a middle ground you can carry a generous volume of luggage as long as four adults are comfortable.

It has a fresh and attractive design for an A-segment car, allowing a certain level of customization. Although it is the usual, that the plastics are hard, it looks good. The instrumentation isn't the latest in modernity, but the 7″ touchscreen makes up for it. All Ignis that come to Spain come with the screen as standard, in the GLE it doesn't have navigation function, but in the GLX it does (they have the mapping installed). In any case it has extended connectivity with Android Auto, Apple CarPlay or MirrorLink, is the same system that has the S-Cross, higher price.

I liked details like the heated front seats, height adjustment of seat belts, automatic climate control, on-board computer with control on the steering wheel (although it can also be controlled to the left of it stretching the arm), the agility of the multimedia system or the decency of the speakers. I was less amused by not being able to remove the steering wheel to adjust it in depth, but I won't say I was uncomfortable either. The version tested is the most equipped, the GLX. 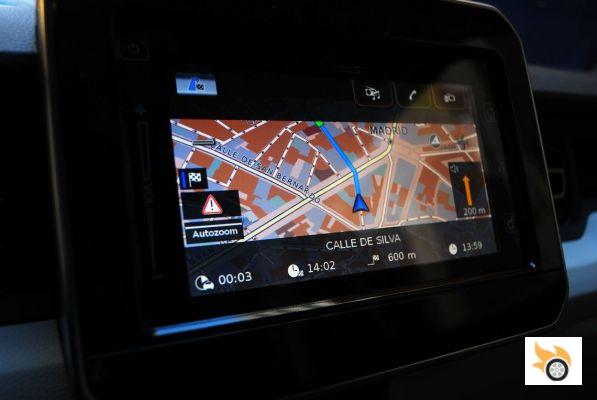 Another highlight of the Ignis is the dual cameras on the top of the windshield, a system called Dual Camera Brake Support (DCBS). The cameras keep an eye on the lines of the road, so they detect unintentional lane drifting or when the driver starts to fall asleep while weaving. At least I found the lane departure warning to be insufficient, although the steering wheel does vibrate. It's also capable of detecting pedestrians and other vehicles, giving a warning of a possible collision - this works much better - or automatically decelerating to avoid greater evils.

It is not capable of reading traffic signs, nor does it measure safe distance, nor does it have an intelligent cruise control function. The GLX has the stupid cruise control, which is limited to keeping the pace. It also has a reversing camera, but in this size of car I don't see it as essential. As the whole test was during the day I couldn't evaluate the efficiency of the headlights, which in the GLX are LED projectors and in the GLE are conventional halogen.

In short, the Ignis seems to me a very interesting model in its approach. If you are looking for an urban car, with some off-road abilities, spacious, cute and with a level of technology above average, the Ignis is our car. You already know that I hardly recommend a crossover, but here I don't see so many drawbacks. The semi-hybrid seems very interesting to me, it's only 800 euros more, and in cities like Madrid or Barcelona it's a great advantage in times of limited traffic. Unlike the Toyota system, the SHVS is very light, and can be competitive even with the Yaris Hybrid in terms of consumption. 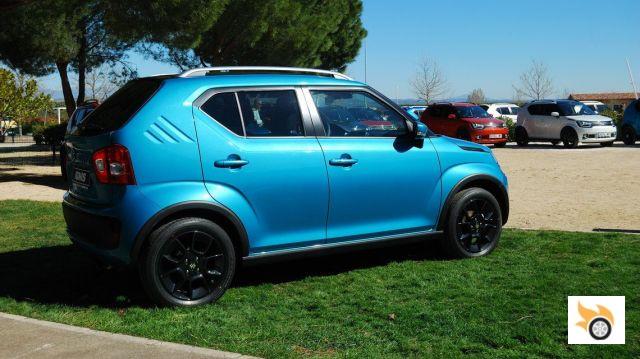 The RRPs, once the 2,000 euros of promotional campaign are subtracted, are as follows:

In all cases the price is reduced by 1,000 euros if the purchase is financed. Metallic paint adds 345 euros to the RRP, and two-tone metallic paint adds 550 euros. We can see that the jump from GLE to GLX involves 1,750 euros more, going from 2WD to 4WD is 1,500 euros, the hybrid is 800 euros overpriced, and the automatic gearbox 900 euros. All of this is within reason. 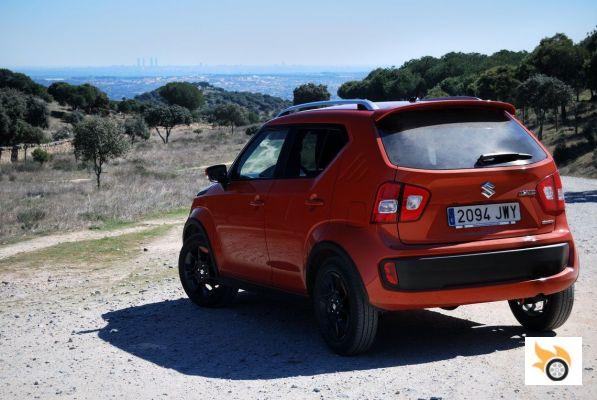