The Baleno replaces the Swift. The engineers have gained space where they could, trimming in the front and extending the wheelbase and rear overhang. It is a design with personality, without stridency, nor is it overloaded. The light clusters are not exaggerated or with bombastic forms, nor does it look like the edges are going to section our veins when rubbing the car in a narrow parking lot. It doesn't look like a cheap car either.

I tested both the three-cylinder (1.0 Boosterjet 111 hp) and the semi-hybrid (1.2 Dualjet SHVS 90 hp), both petrol engines. The Baleno has no diesel engines, nor does it need them, the fuel consumption is very low and it doesn't pay registration tax on any version. In terms of equipment, both were top of the range, GLX. 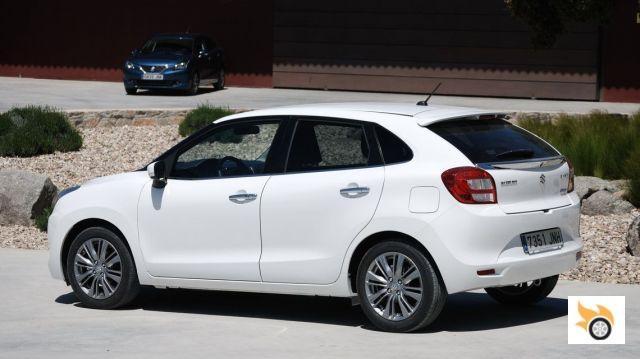 Small on the outside, big on the inside

The Suzuki Baleno is smaller than the Clio, Corsa and i20, but has the longest cabin length (2635 mm), except for the i20, which is 5 mm longer. Compared to the Swift, it gains 18 mm of cabin space. As for the trunk, has the best in the segment: 355 liters including the hollow under the tray. It beats the Fabia by 25 litres, and ties with the Honda Jazz. That's why it's competitive with C-segment cars.

We will find five comfortable seats, where five adults can fit with much dignity, as there is plenty of legroom, and is well used in width. However, in the rear seats, I consider that 1.8 meters high is the maximum to be comfortable, and in the central seat, someone of 1.7 meters is at the limit (because of the position of the headrest). More than you'd expect in this segment. The rear middle seat is more comfortable than usual as it doesn't have a folding backrest.


The design doesn't seem overly modern, it's a bit more timeless. While it has a very decent quality of finish, and the plastics look good, I didn't end up feeling comfortable behind the wheel. I found that the footrest and pedals were too close to me, and I felt the need to move the seat apart. Although the steering wheel adjusts in height and depth (GLE only), I had to choose between having less legroom, or having my arms stretched out more. My 6'4" test partner didn't have that feeling. Depends on how you're built, I guess. 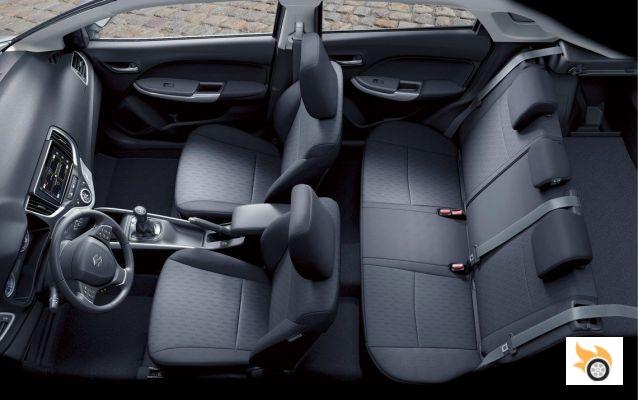 I'll compensate for the lack of my own interior photos with the press ones, which allow us to see the differences between the different trims, it's not the usual. The base model, GL or GLE, has an interior a bit more usual of 2010 models, although there is an even more basic one that we won't see in Spain. The GLE's seems more of this era, with a large 7″ full-colour touchscreen. It's totally symmetrical, it doesn't take any risks, but it doesn't need to either.

The instrument cluster can be of two types in Spain. The on-board computer can display its information on a 4.2″ monochrome central screen (GL, GLE), or in full colour (GLX). In the middle of 2016 I find it shocking that you have to manipulate the computer, which has many functions, with rods protruding from the instruments. It's the kind of detail that makes the whole thing worse, but in costs it has a quick and cheap solution.


The buttons are not excessive, nor scarce, and almost everything can be found at a glance.

In the most equipped model, the steering wheel has controls on the left side for the sound system, and on the right side for the speed limiter/regulator, as well as the radar active cruise control controls (yes, in a B-segment). The mobile phone is controlled by three buttons located at 7 o'clock, if you imagine the steering wheel as a clock. It comes with leather in all cases. 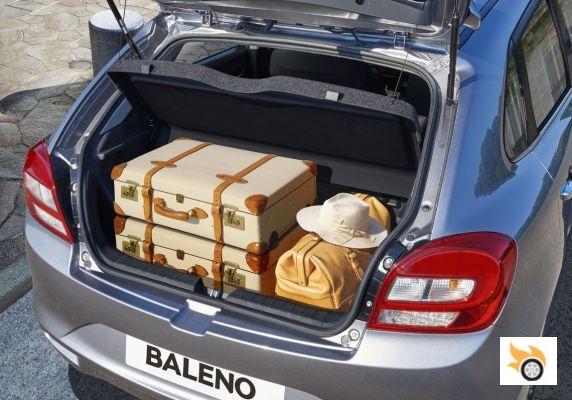 The single-zone climate control is very easy to use, it comes standard on the top model, the GL and GLE have air conditioning with manual controls. We will also find in the top of the range buttons for heating the front seats, behind the handbrake, nothing visible on the move. Under the climate control there is a cigarette lighter socket, USB and auxiliary connector, and there is another cigarette lighter socket in the rear, with a corresponding storage compartment.

The integrated tablet has extended connectivity with iPhone phones, via Apple Carplay.

There are several storage compartments. With lid has the conventional glove box, with little useful space if we carry manuals and documentation, and the central chest, which serves for a few CDs and two packs of snuff (approximately). In front of the change has two holes, one prepared for drinks or mobile phones, and other more general use. They don't look bad either to the eye or to the touch. At the height of the driver's knee there is another compartment. In the doors fit bottles of more than one liter capacity.


I end this section with the trunk. The Baleno has a slightly elevated load opening and plenty of space. Above the tray, which isn't flush with the load opening, there is room for 320 litres, so there is room for 35 litres underneath. On the sides there are two further recesses, lighting and a hook for bags. The upper trunk tray is rigid and removable. If we fold down the seats, we will have a maximum of 1,085 liters. Not bad for not reaching 4 meters. 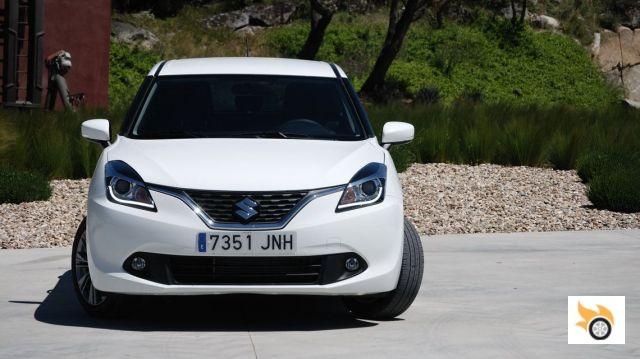 First I got behind the wheel of a 1.2 Dualjet SHVS, which is the only semi-hybrid on the market with a manual gearbox, after the Honda CR-Z left the market. It drives exactly the same as the 1.2 Dualjet, the power is the same, and you don't have to do anything special. The hybrid system reduces fuel consumption, but does nothing in terms of performance (0-100 km/h in 12.3sec and 180 km/h top speed), and the declared power is the same. The semi-hybrid is 10 mm lower and has 10 mm less headroom.

It has a small electric motor that provides 3.7 hp of power, the car is a little more agile at low speed, and it is always assisted by the petrol engine, it never moves the car by itself. The energy to power it is stored in a compact lithium battery under the driver's seat, which holds 0.38 kWh. The weight added by the hybrid system is a ridiculous 12.3 kg. In the Honda IMAs, the batteries are bigger and heavier, but the usable capacity is very similar.

In other words, they don't tell me it's a semi-hybrid, and I would only have known about it from the computer graphics and the low consumption

The consumption shown by the computer was below normal at all times, very competitive with a diesel, and even the semi-hybrids sold by Honda or the Toyota Yaris Hybrid. What's more, the Toyota uses a technology that adds more weight, the net benefit is more noticeable in the Baleno, obviating the possibility of zero fuel consumption. Driving "uphill" and after having climbed the Galapagar pass with joy, it spent 4.6 l/100 km of gasoline, very little under the circumstances. After my partner took it and gave more candela, 5.4 l/100 km. This homotor homologates 4 l/100 km, two tenths less than the normal atmospheric (1.2 Dualjet).

In the second round, the three-cylinder petrol, which is the most performance-oriented model in the range as it has a turbocharger: 0-100 km/h in 11.4 s and a top speed of 200 km/h. It feels lively, it revs happily, and fuel consumption is also contained. On a mainly motorway trip, and using the active cruise control, I was satisfied with 4.5 l/100 km, exactly what it is homologated. Keep in mind that the cruise control is braking and accelerating depending on traffic, and that increases the expense.

I'm an inveterate anti-tricilindrical, but in the B segment I can understand and even justify it. The engine is not badly balanced, and it has a cool sound. Another thing is to spend the same in a car that costs twice as much, that's not the case. The car weighs very little (less than 1,000 kg in running order in any version) and the 111 hp moves the whole thing with a walk. The 1.0 SIDI of the Opel Corsa still seems to me the reference of the segment, but this one is not far behind. With automatic gearbox it goes a bit faster (0-100 km/h in 11 s) but it spends 0.4 l/100 km more.

The 1.2 Dualjet is a naturally aspirated four-cylinder with multi-point injection, a proven technology.

In terms of handling, it tends to be understeer, it rolls a bit, and it doesn't handle "attacking" corners well. The tyres start to give up grip sooner than expected, and it appreciates a calmer ride. The steering is not as precise as it should be - although in this segment it is what it is - but it is average. As for the feel of the pedals, I didn't notice that the semi-hybrid brakes differently even if the battery was full, as I did in the Honda Insight or Toyota Yaris HSD (although they take longer to fill them). 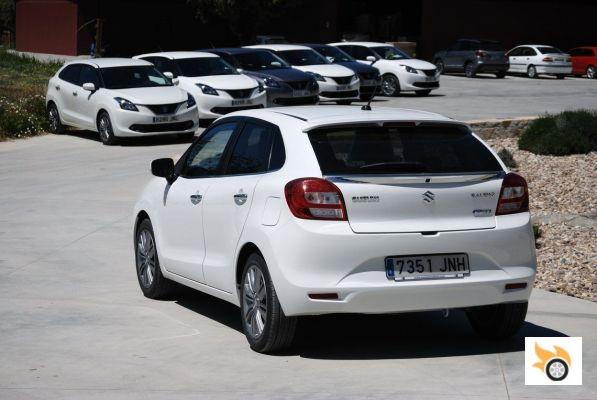 The GLE is the same, but with 16″ alloy wheels.

Talk about vile metal. The 1.2 GL is for 12,655 euros applying promotion. Above that is the 1.0 GLE, for 13,755 euros. The top of the range, GLX, are in range for 15,255 euros for the 1.2 SHVS, 15,555 euros for the three-cylinder, and for 1,500 euros more the same with six-speed automatic transmission. The rest of the Baleno are five-speed manuals, but with the gears well staggered. Prices drop 1,000 euros more if the operation is financed, and another 750 euros off if the conditions of the PIVE Plan are met. 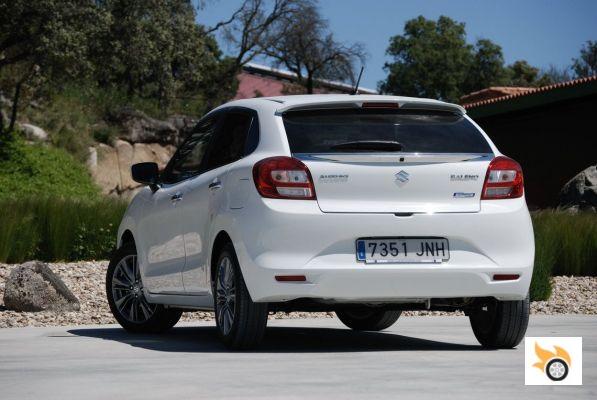 Gas station attendant: a profession in the process of extinction

The AdBlue trap, a necessary evil?