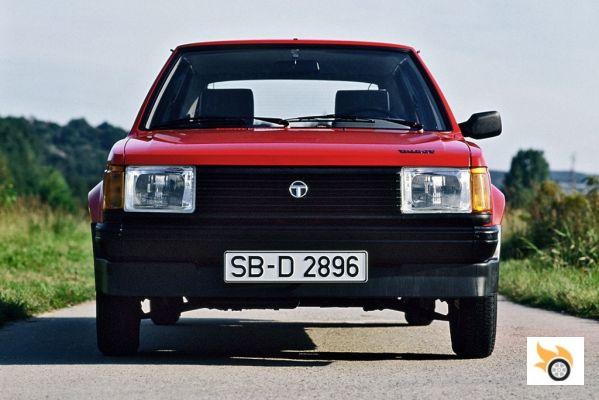 What was Talbot? We have to go back to the end of the 19th century and the town of North Kensington (England) to highlight the figure of Charles Henry John Chetwynd-Talbot, a restless young man who at the age of 16 inherited from his father an immense fortune, an endless list of noble titles and an inordinate fondness for horse-drawn carriages. In fact, this young nobleman born in the prestigious London neighbourhood of Belgravia, with the security that comes from having the basic necessities guaranteed, worked for some time as a chauffeur of the fast carriage that linked Buxton with Alton Towers (one of his mansions) on a daily basis.

His interest in horses and the incipient world of automobiles led the fifth Duke of Talbot to negotiate with the French company Clément-Bayard for the importation and subsequent sale of their vehicles on English soil. The collaboration contract was signed in 1903 but it was not until 1905 when the first vehicle resulting from this strange contract was put into circulation, but not under the name of Clément-Bayard but under the name of a new brand: Clément-Talbot. As far as the vehicles were concerned, it can be said that when they arrived on English soil, the anagrams were simply changed.

Only a year after the start of the sale and purchase operations regulated in the commercial contract, vehicles that had been bought from Clément-Bayard but which had been modified to a greater or lesser extent and which were also offered for sale under the Talbot brand began to leave the English workshops.

This operation greatly inconvenienced the French, but the results were satisfactory: both Talbot and Clément-Talbot models began to be well received by a select English public and the French decided to stop exporting used vehicles to England and start manufacturing them directly in the British Isle, which also allowed their customers to customize their vehicles more deeply. In 1910 between 50 and 60 vehicles of both brands (Talbot and Clément-Talbot) were being manufactured in England and in 1913 a Talbot became the first vehicle to travel 100 miles in one hour (about 160 km/h), which resulted in greater recognition for both brands and led them to offer up to fifteen different models simultaneously.


With the outbreak of the First World War, the Clément-Bayard facilities in Chaleville-Mézières (Ardennes) fell into the hands of the German army, which stopped all projects in favour of the manufacture of armaments in France and ambulances in the London factory. At the end of the war, the economic situation of both subsidiaries was very bad. The French division was sold to a brand that had been founded in 1919 by the son of Jewish immigrants named André-Gustave Citroën, who, thanks to the diamond business, had amassed an interesting fortune.

The English subsidiary was acquired by Darracq, an English-owned automobile company based in the Parisian suburb of Surennes (Hauts-de-Seine). As had happened with Talbot, Darracq's history is also littered with ongoing misunderstood partnership deals.

Darracq began his business venture by manufacturing Gladiator motorcycles, in 1896 he launched his first electric vehicle, in 1900 he marketed his first internal combustion engine, from 1903 to 1907 he would manufacture in Paris different models under Opel license, in 1906 he set up a factory that years later would buy what today is Alfa Romeo, in 1907 he opened another factory in Vitoria (Spain)? All this constructive energy of the new parent company materialized in a new range of luxury and high performance models that were marketed under the name Talbot-Darracq and that had models as successful and exclusive as the Talbot 105 of 1934.

Such exclusivity put the Sumbeam-Darracq-Talbot group on the ropes, and with so few sales they went bankrupt in 1935. It was then that the Rootes group, dedicated to the manufacture and marketing in England of various brands, decided to rescue only and exclusively the Talbot-Darracq division and rename it Talbot-Lago. During this time the brand benefited from the maxim of the group, which put profits before engineering. As a result of this policy, it can be said that for the first time in history, models signed as Talbot were profitable.


During this golden age, Talbot-Lago enjoyed several racing successes and launched such iconic vehicles as the T150 model, equipped with a four-litre engine, hemispherical combustion chambers and 160 horsepower. Again, the disasters of war brought production of these vehicles to a halt. However, after the Second World War, the manufacturer was able to restart the production of cars and also with renewed technology. Emblematic models were launched, such as the Grand Sport equipped with a newly developed six-cylinder, 4483 cubic centimetre engine, the Lago Sport with a Maserati engine and the Lago America with a BMW engine.

These vehicles had great prestige increased by the successful participation of a T26 in the 24 hours of Le Mans. In addition to the sports cars, the brand also ventured into luxury models such as the T26 Record. However, post-war Europe was not going through good times and the demand for super-luxury cars was declining and the Rootes group entered an economic crisis from which it never recovered.

In 1958, the Talbot-Lago brand was bought by the French Simca, a brand founded in 1934 for the licensed production of various Fiat models and that from 1951 began to manufacture its own products.

The first thing Simca did with the acquired brand was to replace the block of BMW origin that equipped the Lago America by another also in V8 architecture but with 2,351 cubic centimeters, only 95 horsepower and coupled with a three-speed gearbox. They had given the Talbot-Lago the Simca Vedette Versailles powertrain and turned a myth of sportiness into a slow and clumsy car. Oddly enough, the second thing Simca did was to make Talbot-Lago inactive from 1960 onwards.


Gradually, during the 1960s Simca became the property of the American Chrysler, which also bought several brands of the defunct Rootes group. This meant nothing for Talbot-Lago, which remained inactive and out of production.

After Chrysler's failure in Europe, its European subsidiary was sold in 1978 to PSA Peugeot Citroën, a group that came into being in 1976 when Peugeot absorbed Citroën. Thus, if we look at the article, the English and French divisions of the defunct Clément-Bayard were once again "together". After the purchase of the rights, PSA decided to relaunch the Talbot brand again but in a completely opposite way to what history would have wished. Far from the sportiness and exclusivity of the past, PSA decided to use the Talbot name to rename previous Simca and Chrysler models that could still have commercial life and thus amortize the investments made in the purchase of both Citroën and Chrysler's European subsidiary.

Thus, all Simca and Chrysler models sold in Europe were sold under the "new" Talbot brand.

The Talbot brand had new products while under the PSA umbrella. However, not a single one of these vehicles could be classified as a new product. From 1978 onwards, Talbot had "novelties" such as the Solara (1980), the four-door version of the Talbot 150, the Samba (1981), a clone of the Citroën LN / LNA and Peugeot 104, or the Talbot Express (1981) as another clone manufactured by Sevel Sud, a company in which PSA and Fiat had interests.

In other words, Talbot was resurrected to become PSA's low-cost brand.

Only the Talbot Tagora, launched in 1980, can be considered a new product, although its development had already been started by Chrysler-Simca. Unfortunately, this model had rather low quality standards and coincided in time with the successful Peugeot 505, so PSA cancelled its production in 1983 after only 20,000 units had been produced in three years. The manufacturer expected to produce around 30,000 units of the Talbot Tagora per year: 1,310 units were sold across Europe in 1983.

Despite the good commercial results of the Samba and Horizon models, when the replacement for the latter was presented in 1985, and after the name Talbot Arizona was announced, what PSA showed was the Peugeot 309, a kind of Peugeot 205 with a lengthened rear end, which surprised the general public enormously. However, the masterstroke would be given in 1986 with the cessation of the manufacture of all Talbot passenger cars and leaving the Express van, sold exclusively in the English market, as the only vehicle on sale with the Talbot logo until 1992, when the brand disappeared from all markets.

Curiously, the brand was not dissolved, but the name and rights remain the property of PSA. In fact, during 2010 there were rumors that Talbot would be reborn as a low-cost brand, but the matter never went beyond rumor.

Currently the PSA group has incorporated under its protective umbrella the German Opel, a brand that has 16 years of millionaire losses despite having products as good as the Insignia or the Astra. I dare to say that today there is no product of the German brand that is not in the market and that is not in equal conditions to fight with any car of the competition.

But Opel's losses make it necessary to restructure the brand. In fact, after the General Motors group had sold all its brands of rebranded Opel products, it has decided to sell this little big European drag. Had it not been for the "Brexit", Opel would have made a profit in 2016 for the first time so far this century, the proof being that in the first half of the year it was already in positive. The exchange rate of the pound and a decline in demand did the rest.

In recent months much has been said about the survival of Opel, even stating that its survival would be to focus on electric vehicles. In 2017 a new horizon appears for the German brand but a question remains in the air: will it be a fruitful horizon or will we be facing a new Talbot? Time will tell...

Pistonudos: How did we get here? ❯