The Mazda CX-3 was initially presented to the public at the Los Angeles Motor Show in late 2014 and will be marketed in Europe this year. In fact, in Spain it is already on sale. However, it was not until this week that we were able to get behind the wheel of the new model of the firm of Hiroshima, a CX-3 that, along with the CX-5, will represent 50% of the 15,000 sales that Mazda should make this year in Spain. 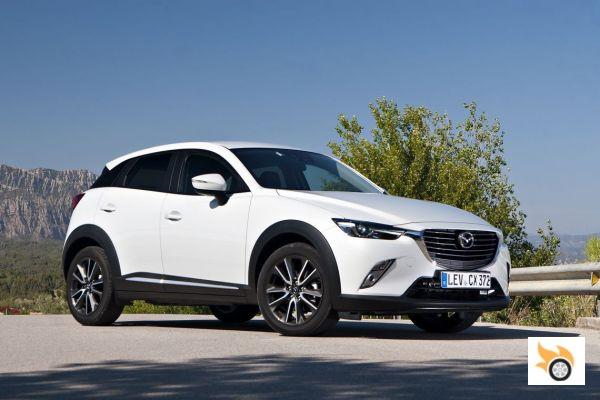 The Mazda CX-3, despite its 4.28 m long, takes over the platform and engines of the new Mazda2 (which measures 4.06 m), adding the possibility of all-wheel drive on the CX-3. In the face of increasingly stiff competition, the Mazda CX-3 gets its first win in terms of design. I know it's all a matter of taste, but with the exception of the original Nissan Juke, neither the Peugeot 2008, Opel Mokka nor the Mitsubishi ASX can match it. 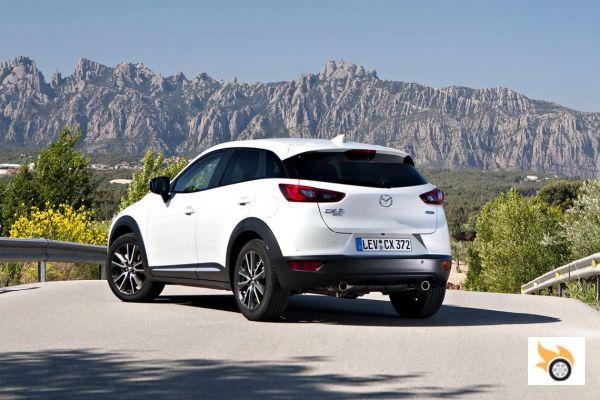 It's true that the grille and headlights, Mazda's trademark Kodo design, are very similar to the rest of the range and especially to the Mazda2. However, for the CX-3 the design team knew how to give it a personality of its own and not make a clone in reduction of the CX-5; which would have been the least risky solution, but also less original. On the contrary, by using the 2 waist lines (the rear one being higher) that cross in the middle of the side of the car, the CX-3 exudes dynamism on all four sides. Personally, I see a certain futuristic buggy feel to it. That originality is due to the CX-3's difficult task: it's a car of conquest. It has to capture a clientele that has never bought a Mazda before, a young, dynamic clientele that gives priority to design. That is, precisely the clientele of the Nissan Juke (hence the success of the small Nissan despite a not buoyant habitability). However, Mazda goes further and despite giving priority to design, they didn't give up on practical considerations. 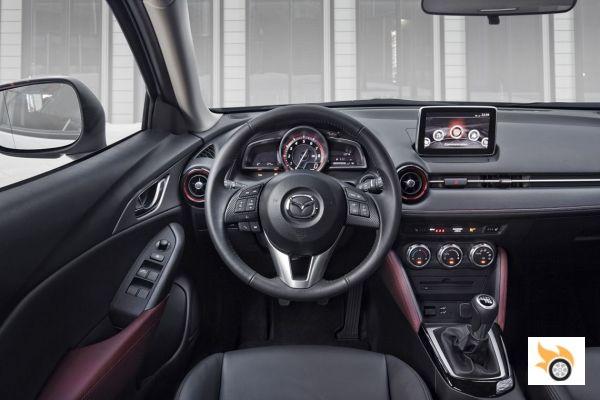 The CX-3 does not renounce to offer a good habitability, but neither does it renounce to design in its cabin. The instrument panel with central rev counter, a refined dashboard design dominated by the multimedia screen, a raised central tunnel with leg rests, the dashboard is that of the Mazda2. Which is not a criticism, on the contrary. By the way, in terms of design it's very similar to that of the new MX-5.

Once on board, the driving position is good, with a height and depth adjustable steering wheel. The ergonomics, as in the other Mazdas, are very good and you find all the instruments in a natural way, with only one exception: the volume of the radio. The volume control is located behind the control wheel of the MZD Connect multimedia system. I also have to admit that the volume control on the multifunction steering wheel, nobody uses that button in a current car anymore (except the couple to insist that they don't like the volume at which you put Airbourne). As for the finishes, my assessment is mitigated. On the dashboard, the plastics chosen are excellent to the touch and give off quality, whereas on the door panels it's a harder plastic and a different shade. It's something that the front passenger will clearly see in the area where the dashboard and door "meet", at the foot of the A-pillar. Still, the overall feel is good (among the best in the B-SUV segment) and the assemblies seem excellent; at least the fittings are.


In addition to a superb design, it offers a very successful ergonomics and a habitability superior to that of its rivals.

In addition to much better ergonomics, the CX-3 offers greater width and length in the front seats than the Nissan Juke. In the rear, the reduced glass area might make you think that the CX-3 also sacrificed roominess in the rear seats; nothing could be further from the truth. The two rear passengers will travel much more comfortably than in the Juke or the Peugeot 2008: the legroom is just right and the seats have excellent cushioning. The CX-3 is homologated for five seats, but let's be honest, not even D-segment sedans can fit three people comfortably on the rear bench, so in a B-segment, whatever it is, even less so. 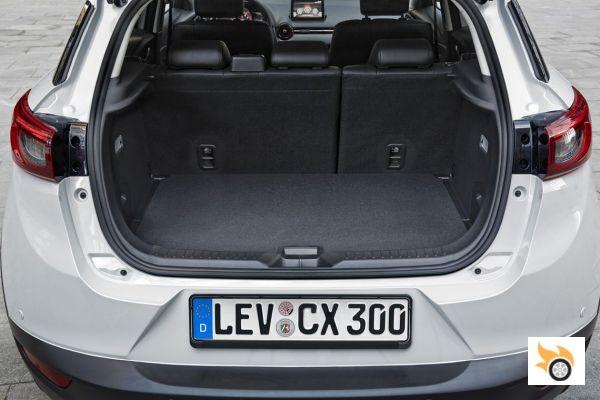 However, when it comes to the boot, the CX-3 isn't as practical as the French SUV, mainly because of a load threshold that's perhaps too high for a B-segment car. Compared to the Juke, the CX-3 offers the same capacity (350 litres), while Renault's Captur offers up to 455 litres thanks to its 16 cm sliding rear bench seat.


Aware that this is a model of conquest and with a semi-premium positioning, Mazda offers only 2 finishes: the Style and Luxury, which in the rest of Mazda ranges represent the intermediate and top of range finishes, respectively. 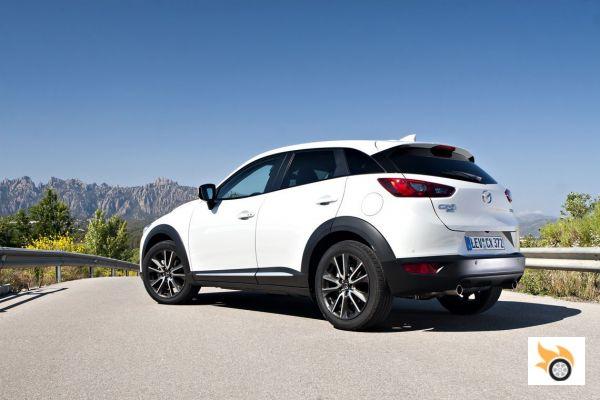 However, much of the active safety equipment is only available as an option via the Travel pack, which costs 1,050 euros. This consists of Blind Spot Monitoring (BSM) and Rear Cross Traffic Alert (RCTA), Directional Lighting System (AFLS), High Beam Control (HBC), Adaptive Cruise Control (MRCC) and Emergency Braking (SBS).

I had a chance to test the 105bhp 1.5 Skyactiv and the 150bhp 2.0-litre petrol. At first glance, the diesel seemed a little underpowered for a car that is 20 cm longer and weighs about 100 kg more than the Mazda2, the model on which it is based. However, thanks to its 270 Nm of torque (available from 1,600 rpm to 2,500 rpm) getting through traffic is very easy. In the city it gives a pleasant - and necessary - flexibility, while on the road it is sufficient to avoid slowing down on steep slopes. In addition, it is an engine that knows how to be sufficiently discreet and only raises its voice when we accelerate with momentum. 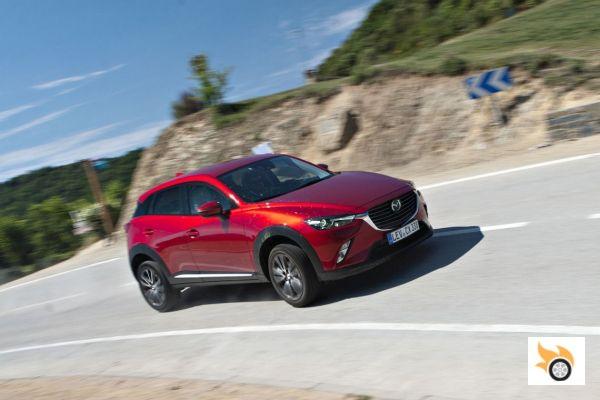 It could even be a more fun engine if it weren't for the gearbox and its extra long gear ratios, there to help lower the car's average fuel consumption, as Mazda openly acknowledges. Even so, with the manual gearbox, the CX-3 shows a certain amount of verve. I was also able to test it with the automatic transmission and all-wheel drive. This configuration is, how to say, ideal for a very small audience: the one that moves exclusively in urban areas and with strong adverse weather in winter. The automatic transmission is a classic torque converter that can't hide its classic design. It's a slow gearbox that erases a large part of the engine's liveliness and that the manual gearbox does let you see despite its long gear ratios.

The 1.5D knows how to be discreet and with verve when we ask it to, as long as it's with manual gearbox.

While previous Mazdas had a reputation for having a firm suspension, the CX-3 clearly abandons the taste for driving fun, at least in its diesel version, because in petrol it is still present. The suspension filters effectively the irregularities of the road, but the front end suffers from an excessive bumpiness (up to four consecutive undulations of the nose I have counted after passing through a pothole). Perhaps a tuning with less firmness in the springs and a little more in the damping would erase this phenomenon. Otherwise, it shows an excellent comfort and the steering is precise and quick without being communicative. 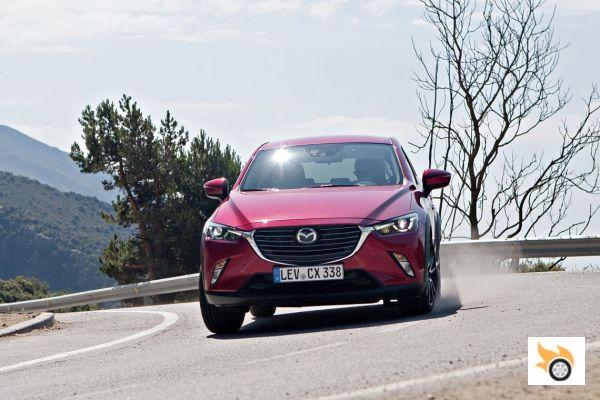 To the excellent comfort already proven in the 1.5 litre, the 2.0 150 adds a touch of sporty performance.

I was also able to test the CX-3 with the 2.0-litre 150 bhp engine, front-wheel drive and manual gearbox. This is undoubtedly the most genuinely Mazda version of the range. To the excellent comfort already proven in the 1.5-liter, the 2.0 150 adds a touch of sporty behavior. From the outset, the diesel's chugging phenomenon is non-existent, so the CX-3 is a really agile car that's fun to drive. You can position the car in the corner with the brakes (i.e. by braking at the entrance of the corner and not before) or you can help it to turn by easing off a little on the accelerator. And the rear axle is not against a bit of a dance from time to time. Even the ESP is somewhat permissive, but it never lets you drift the car like a BMW DTC would, it always recovers you before a lambda driver can get scared of the situation. In short, it's not intrusive. Among its rivals, a Peugeot 2008 will be a little more incisive, while a MINI Countryman will have more poise. The CX-3, at least the 2.0 150, offers greater homogeneity. Otherwise, it also has a gearbox with very long gear ratios (between second and third there is a jump of more than 1,000 turns, for example), but whose handling is pleasant, relatively short and firm.