The Seven is the purest expression of the modern sports roadster. It lays the foundations on which every roadster with sporty aspirations is based: lightness, longitudinal front engine, rear-wheel drive and seats almost on the rear axle. Many roadsters have followed these precepts (Triumph Spitfire, BMW Z3 and Z4, Mazda MX5, Pontiac Solstice/Opel GT, etc). The importance of the Seven is such that when in 1972 Lotus stopped making it, its dealer in the English town of Caterham bought the rights, plans and tooling to continue production. And to this day. Of course he was not the only one, many other manufacturers were inspired by the Seven to sell their own interpretation of the Seven, as Westfield in the UK, Garbi in Spain or Irmscher in Germany. It should be noted that Argentina the Lotus Seven was still manufactured under license (about 51 units) by the importer Lotus, so these should be considered authentic Lotus and not reinterpretations. In the same way that the current Caterham Seven is a direct evolution of the third generation Lotus Seven (Series III). 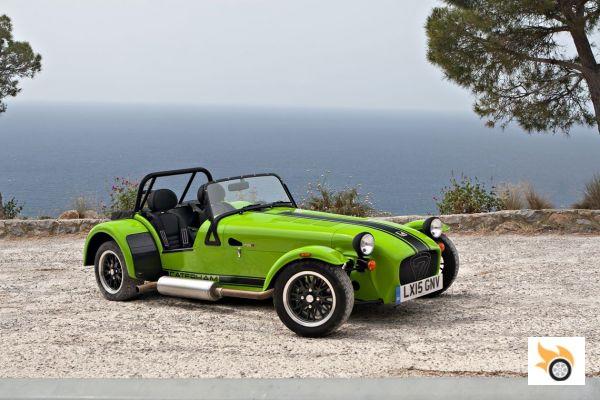 Throughout these years I could sit in several reinterpretations of the Seven (the test of the Irmscher one in the outskirts of Zaragoza left me an indelible memory), but never in a model with as much legitimacy as this one. Today, thanks to Auto-Storica, which now imports Caterham in Spain, I was able to test for a morning a unit of the 275R, which is located in the meridian of the English manufacturer's range. At the top of the range we find the 165 and culminates with the 485.

In the Caterham range, the 275 R succeeds the Superlight 120, which was equipped with a Ford 4-cylinder 1600 cc and developed 120 hp. So the 275 delivers 275 hp?! Well no, our English friends have a very peculiar way of naming cars. So, the 275R is equivalent to twice the engine power, i.e. 135 BHP, and we already have the 270 (although in reality the engine delivers 137 hp). The 5, meanwhile, is to emphasize that this is an export version. The R, on the other hand, indicates that this is the "racing" version (self-locking differential, semi-brakes, harnesses, carbon fiber elements, rear stabilizer bar, lightened steering wheel, etc.) as opposed to the S version, more oriented to tourism, as it has leather seats and upholstered cabin.

At first glance, 137 bhp may seem a bit too much for a sports car. To believe that the 275 is underpowered would be to forget its origins, remember that the Lotus Seven had an engine of just over 40 hp. As for the 275R, it weighs just 559kg, giving a power-to-weight ratio of 4.1kg/hp. By way of comparison, an Alfa Romeo 4C has a ratio of 4 kg/hp.

Thanks to its featherweight, the Seven 275R has a power-to-weight ratio of 4.1 kg/hp, similar to that of an Alfa Romeo 4C. 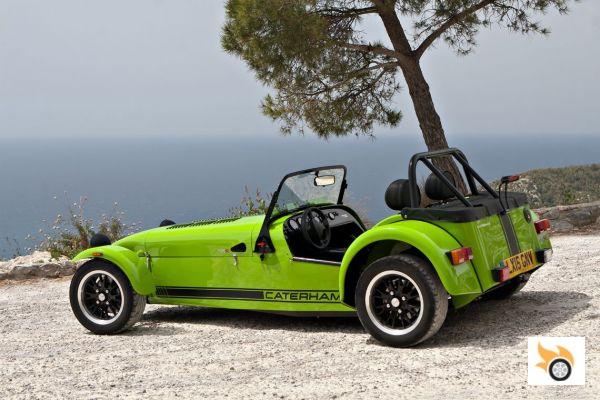 First look at this frog full of amphetamines. The thing is small, very small. And low. The front end reveals its suspension layout, with its overlapping triangles, while at the rear it has a semi-independent De Dion axle. I look at the tread pattern of the tyres, they are Avon CR500 semi-slicks, a tyre developed specifically for Caterham, with racing compounds and a minimalist tread pattern so that it can be used in the rain and not only to be homologated as a street tyre. Available in 13" and 15", the car we tested was fitted with the optional 13" tyres (the standard 15" tyres don't really add anything).


Time to get in the car. Or rather, to drop into the narrow tub that serves as the cockpit. The operation is still a bit strange and my lack of habit makes me dirty the trunk with my feet. On board, everything is cramped (and not just because I've spent this part of the summer eating ice cream...) and ergonomics seem to be absent from Caterham's concerns. Especially, when you can't get the engine started due to the strange position of the ignition key under the dashboard. As always, prejudice is a bad advisor. 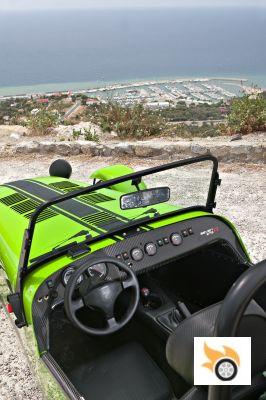 The rev counter and speedometer aren't very big and not very legible once on the road, it's true, but the Caterham guys have placed LED lights on the top of the dashboard to indicate that we're approaching the cut-off and the red zone; just like in a racing car. Then, the different switches scattered around the dashboard are with a certain logic, the most used ones are closer to the steering wheel. For example, the turn signals are activated without having to take your hands off the steering wheel despite being activated by a switch worthy of the cockpit of a DC-3: with one finger you turn to the right to indicate right and vice versa. OK, it doesn't have automatic return, but it shows that there is actually some ergonomics present, albeit rudimentary. And of course, it lacks any infotainment element, to replace it there's the scenery and the exhaust.

The very narrow bottom bracket forces you to wear racing boots, otherwise you're left with two options: learn toe-tack technique the hard way or choose between braking and clutching, but you can't do both at the same time like in an Audi A3. To make matters worse, it's slightly tilted to the right. All that coupled with the lack of footrests makes you think that the driving position doesn't seem to be the best in the world. Until you start driving and you forget all about it.

The first few meters behind the wheel of the Seven 275R and you forget about the rudimentary ergonomics, your mother-in-law, your boss... everything, come on. You're part of the car and you feel absolutely everything, even that cigarette butt you stepped on with the right front wheel. First, you're like a child, watching how the suspension works (with Eibach springs and Bilstein dampers, by the way) and then you're surprised by the liveliness of the small Ford engine. Between the short gear ratios and the car's featherweight, you're almost at 7,000 rpm in no time at all and you already have to shift gears. The clutch is smooth and the shifting is, shall we say, mechanical. Short knob, even shorter travel, clunk when you engage a gear, feel in the palm of your hand when the gear is engaged; it all takes you back to the basics of driving. So much so that sometimes its handling is a bit of a blur, especially from second to third. This point could be improved and would reach perfection. 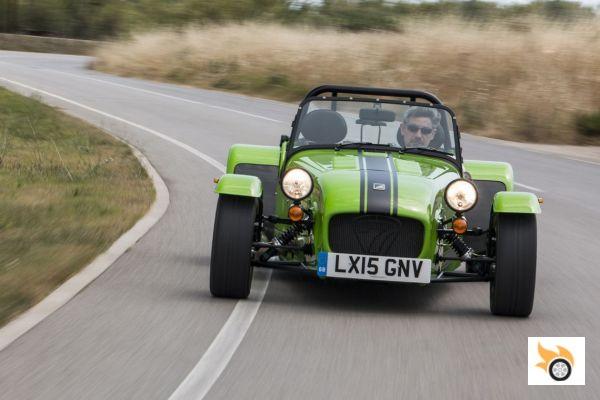 You're part of the car and feel absolutely everything, even that cigarette butt you've stepped on with the right front wheel.

The throttle response is almost instantaneous. 0-60mph in 5 seconds is a formality you can repeat ad nauseam. And although we couldn't measure performance (or fuel consumption) in this short morning we had the Seven at our disposal, the recoveries seem to be also in the efficient category, around 5 seconds.

The engine roars at full throttle and although it doesn't have a very suggestive sound, it recovers when you take your foot off the accelerator. There, the exhaust crackles and emits the occasional deflagration. Simply great.

Underneath it all, whether with 137bhp, more or less, the Seven still exudes a sensation that no other car in current production can offer. It's a real toy, whose optimism and joy it transmits to other road users. Everyone passes you smiling, and you behind the wheel can't help but smile. 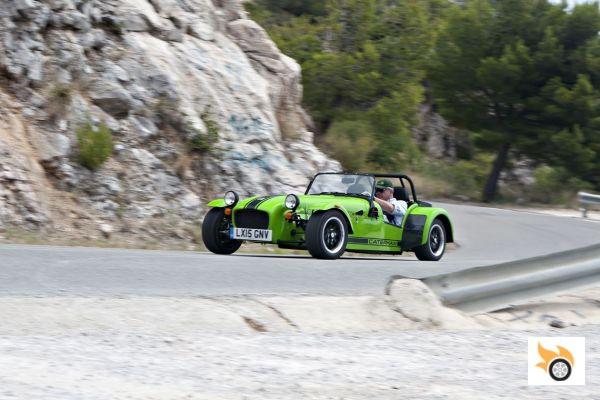 Even with a semi-rigid rear suspension, associated with a Panhard bar (which allows vertical mobility but prevents lateral movements), which makes you feel the bumps in the road all too accurately. The rear suspension doesn't bounce, but you do go up and down because of the strong compressions every time you go over a pronounced irregularity. The front end, with double wishbones and anti-roll bar, is much more rigorous. On the other hand, body movements are very well controlled.

The steering, without assistance obviously, offers little more than 2 turns from stop to stop (in option, it can be as little as 1.75 turns): the Seven is driven with both hands on the steering wheel, like a racing car that can go sideways if you're too rough. Even so, it's fine. The steering provides so much feedback and the drifts are so progressive that it's as if your brain is connected directly to the car. It transmits absolutely everything to you and that's why learning to control oversteer with the Seven is the easiest thing in the world. 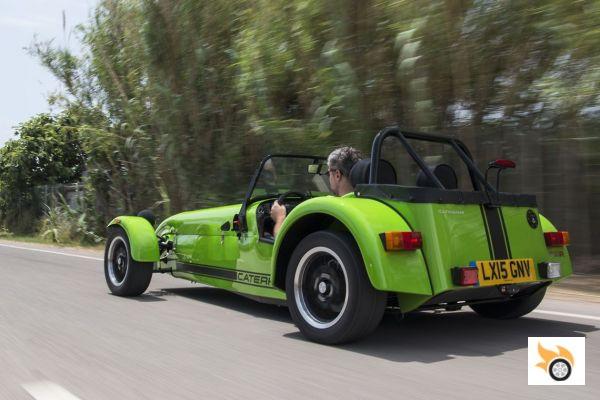 The steering provides so much feedback and the drifts are so progressive that it's as if your brain is connected directly to the car.

The brakes, also unassisted, are hard, but compared to the Irmscher 7's marble-hard brakes, the Caterham's are easily proportioned. Still, you have to press the centre pedal with determination.

After a few minutes, you're attacking every corner as if you've had years of experience in a Seven, feeling how the front end bites into the tarmac on changes of direction, how it pulls into the apex just by looking at it and how the rear end wants to go sideways when you overdo it with the right pedal. You just don't want this moment to end. 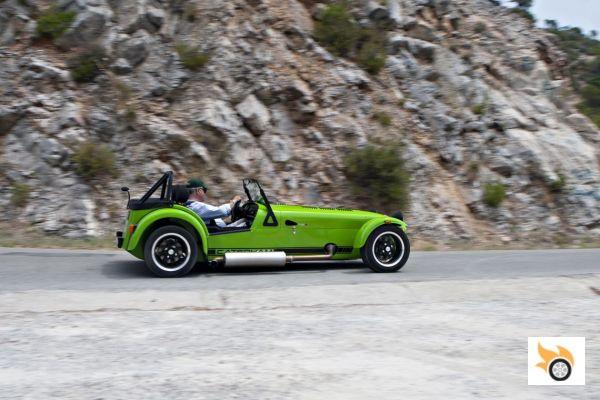 The Caterham Seven 275R is still a basic sports car that would have only drawbacks compared to modern cars (cramped cabin, rudimentary weather protection, sui generis ergonomics), but on a day when it's a bit sunny and you have your stretch of traffic-free corners, there's nothing better or more fun in the world. You'll sweat like crazy, your fillings will pop out with the vibrations and you'll have almost no strength to get out of the car, but your smile will be almost a rictus that you won't be able to erase for days. It's like good sex: you end up sweaty, tired but with a silly smile of happiness that gives you away.

The price of happiness

The Caterham Seven 275 is an expensive car in itself. 42,700 euros without options for a car that nobody in their right mind would use on a daily basis due to its lack of practicality, is expensive. But we are talking about a toy that offers the possibility of customizing it with a series of optional packs (Racing finish -9,378 euros-, Trackday, Touring, 6-speed gearbox -2,747 euros-, wide chassis, lowered floor, etc) and that in the end can happily exceed 60,000 euros. 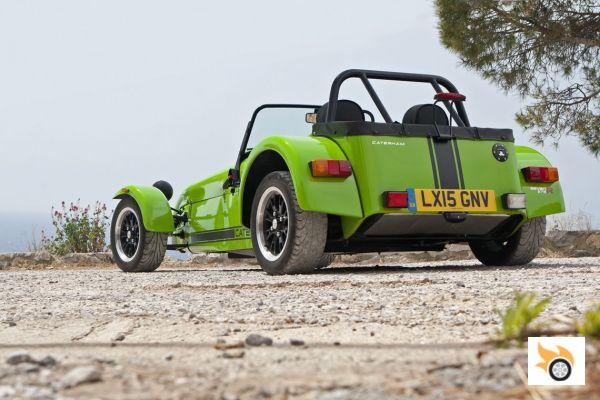 In the end, it's not a car we should look at as a versatile compact. The Seven's sole purpose is pure and simple fun, its only objective is to give you pleasure with adrenaline rushes and the pride you feel at having achieved the perfect line or the perfect drift, depending on your day. And the Seven, in the dynamic section, there's no one who can beat it (its only rival, the Ariel Atom, is much more delicate to drive). So, yes, the Seven does its job with honours: it makes you forget everything; it's just you and the road.

NB: The car-to-car photos are the work of Pere Nubiola. 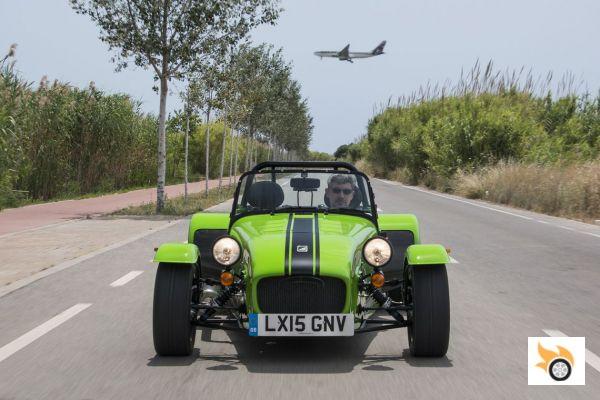 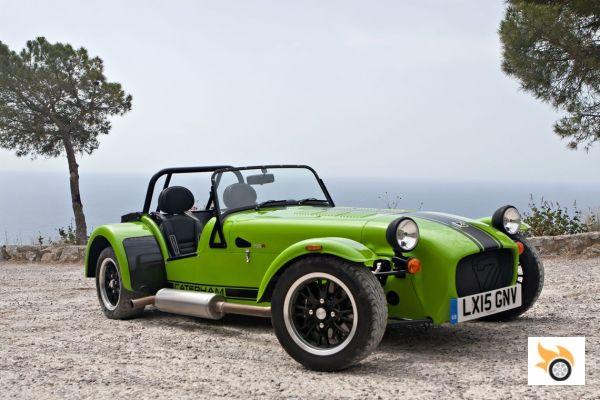 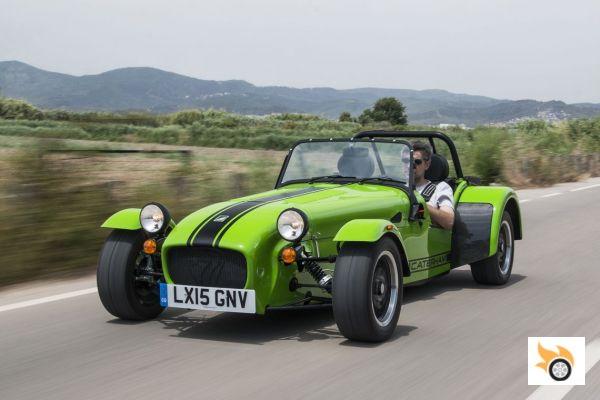