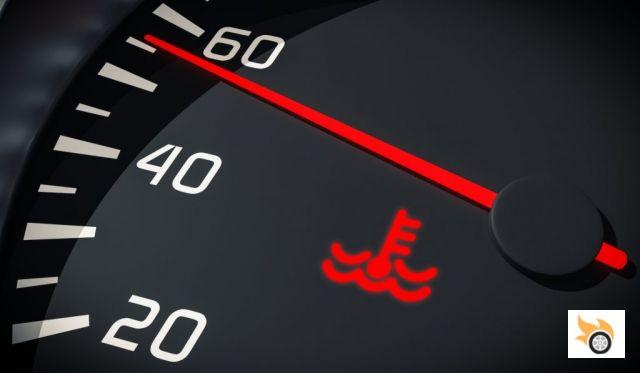 What is the red coolant sight glass?

The red coolant sight glass is represented by a thermometer immersed in a liquid, symbolized as a wave.

The more imaginative may also describe the water temperature warning light as a "sailboat in the sea" or a "buoy in the waves". Whatever you call it, it's important to know what it means and what to do when it's on or flashing.

There is actually no difference between these two warning lights. They indicate exactly the same thing, namely the temperature in degrees Celsius of the fluid responsible for cooling the engine. It is no coincidence that coolant is often referred to as"coolant".

In the early years of motorsport this fluid was simply ordinary tap water. However, over the years various fluid mixtures have been developed that are increasingly efficient in their ability to remove heat.

With the lowering of the freezing temperature, the water-glycol coolant remains liquid up to -40° compared to only 0° for water. In this way, a car parked outdoors in winter will have no problems starting and running. In some Nordic countries where the cold reigns for several months of the year, the practice was in fact to mix animal fat with diesel fuel to prevent freezing.


Instead, increasing the boiling temperature of the coolant from 100° to 135° ensures greater heat removal even in the hottest months or with broken engines.

These technological improvements have certainly increased the performance of the coolant. However, we must always remember that when the water temperature warning light is on, the only thing to do is to stop the car immediately and look for the problem. A running engine that is not being cooled effectively will melt in a short time causing thousands of euros of damage. Alerted man...

How does the water temperature warning light work?

What is the normal coolant temperature of the car's engine?

Although the coolant temperature gauge reaches 130°C, the temperature must be well below this threshold to be considered acceptable.

The temperature of the coolant under normal driving conditions is between 80 and 90°C. However, it can rise after a long climb where the engine has been running a lot or if the engine has been running for a long time. For the coolant recirculation system to work optimally, the engine must be in full operation. If we have been stopped for a long time at very low revs it can be normal to notice an abnormal temperature.


If we see that the water or coolant temperature often exceeds 100°C, there could be problems and it would be advisable to have the car checked.

When the water temperature light comes on: causes...

There are many causes for the engine water temperature warning light to come on and they are usually due to a problem in the cooling system:

What to do with the water temperature light on?

If you see the red water temperature light on, the first thing to do is to stop safely and turn off the engine. Wait 15 minutes and try to restart the engine. If it doesn't start again, it means that the cause was just a faulty electrical contact or fuse, a steep rise or that the outside temperature was too high.


However, if the water indicator light remains on, avoid restarting the engine and immediately check that there is no water vapor under the hood. This would, in fact, be irrefutable proof of a water leak and would make it necessary to call a tow truck.

Let's then check that the coolant level is sufficient (do this with the engine off and cold to avoid splashing boiling liquid). If the level is low, we fill it up (in case of emergency, mineral water is also fine if we don't have the coolant at hand). Once restarted, the warning light should go out, no problem then.

If the sight glass is still on even though the fluid has been topped up, the problem is a damaged component. We do not recommend that you drive again, as this could seriously damage the engine and create thousands of euros of damage that needs to be repaired.

The best thing to do is to call a tow truck and take it immediately to the nearest garage where the damage will be repaired. Believe me the cost of calling a tow truck is nothing compared to the damage caused by an overheated engine.

What to do about the flashing water temperature light?

Any sign that appears on the dashboard about the water or coolant temperature should never be ignored.

What is engine coolant?

Engine coolant is a compound of water and ethylene glycol (in chemistry C2H6O2, also known as antifreeze). Its task is to absorb the heat generated by the car engine and transport it to another location, disperse it and restart.

The liquid is in fact inserted into a circuit called "cooling" which involves several components. One of the most important is the radiator which has the task of exploiting the flow of cold air generated by the movement of the car to cool the hot coolant. Under normal conditions, the flow of fluid keeps the engine at the proper temperature and prevents the water temperature warning light from coming on.

Why does the car's water warning light often come on?

The car water warning light should not come on unless there is an ongoing problem with the engine cooling system. Therefore, any "abnormal" ignition should not be underestimated and should be treated as a possible fatal problem for the car.

However, if we are 100% sure that there are no problems with the engine cooling system, perhaps because we have just had the work done by a trusted mechanic, then the ignition of the water light could be caused by a small problem with the electrical system or control unit.

The water temperature light of modern cars is in fact an electrical sensor that constantly sends temperature data to the control unit. It is enough for the sensor, the connection cables or the control unit itself to be faulty to cause abnormal ignitions.

Normally, however, such a problem causes several lights to come on and it is very rare that only the water indicator light comes on. Therefore, the best advice is to rely on an electrician to check the condition of the electrical system and understand where the problem lies.

What to do when the temperature light comes on?

In any case, when the temperature warning light comes on, it is best to stop the vehicle as soon as possible and check the problem before it is too late.

What should we do if the engine coolant temperature gauge warning light comes on?

In any case, when the coolant warning light comes on, the most prudent thing to do is to stop the vehicle as soon as possible, since there is a risk of burning the engine, and in such a case it is generally better to change cars.
9 July two thousand and twenty-one

How does the water temperature sensor work?

How it works.
This sensor checks the temperature of the coolant, which is in charge of absorbing the engine's heat and making it work properly.
It works like a thermistor, reducing its internal resistance when the temperature increases and vice versa.
8 feb two thousand nineteen

How do I know if the temperature sensor is damaged?

Tyre pressure light: Why does it come on and what to do? ❯

add a comment of Water temperature light: what to do if it is on or flashing?