The technical solutions applied to this car were revolutionary at the time, mainly in terms of suspension and brakes. Despite the fact that it was not strongly motorized, its small horsepower was very good as it had very clean aerodynamics, especially in the initial bodywork of the three that existed.

We can also consider the GS as part of Spanish automotive history, as several tens of thousands were manufactured at the Vigo plant. Citroën celebrates the 45th anniversary of its launch with a press release, but we're not going to stop there, and we'll put a little more meat on the grill.

The genesis of this car is the C10 prototype from 1956, 14 years before its launch. It had a bubble design, similar to that used in solar cars, with fairing rear wheels. Way ahead of its time, and ahead of the Volkswagen XL1. In the development began to take into account concepts such as hydro-pneumatic suspension, premiered in the DS, and the rotary engine (Wankel).

By 1963, it had already been integrated into the "Project F", was close to production, and the Renault 16 appeared. As the designs were very similar, Citroën scrapped the project in 1967, but some components were reused for the "Project G". The bodywork designer was Robert Opron.

While Citroën cancelled "Project F", the British Motor Corporation (BMC) commissioned Pininfarina to carry out a design study, which culminated in the 1967 Aerodinamica Concept. Two prototypes were built, rejected by the British for being too risky in design. However, they used a bit of the rear part for the Rover SD1. Robert Opron was very inspired by that aerodynamic study, or copied it directly, according to the reader's taste. At the time he claimed to be unaware of its existence, but the press of the time criticized him a lot for it.


Citroën needed good aerodynamics because they didn't have the resources to develop more powerful engines, so they had to make the most of what they had. According to Velocidad magazine (no. 612, June 1973) the design was perfected by punch-card computer, using 2,000 reference points. The final result is the one we know.

It is only 1.35 metres tall, with a 40-degree sloping front window, a 30-degree sloping rear window and an abrupt body end (what the Italians call zagato coda tronca) at 80 degrees. This fastback design, which is still very good today, allows good aerodynamic penetration and prevents turbulence at the rear. In addition, the underbody was completely faired. Opron's designs are very aerodynamic, which is understandable knowing his origins.

Opron joined Citroën in 1960, working with Flamilio Bertoni, the father of the Citroën DS. His designs have integrated headlights and Kammback silhouette, just mention the Citroën CX, SM, Renault 25 or Alfa Romeo SZ, among others. In 1976 came the first restyling, and in 1979 independently launched the GSA, which is an evolved GS with a conventional tailgate, also available as Break.

The first body (fastback) had a vertical opening tailgate with double shock absorbers. The boot could hold 465 litres, the spare wheel did not take up space as it was inside the engine compartment. The shapes of the trunk were very square, the space was well used, but had the disadvantage of gaining heat easily due to the exhaust pipe and muffler. For the magazine, the design was "aesthetically perfect". As a curiosity, it had radio pre-installation, the antenna always in the same place, a novelty in Spain.


In 1972 appeared the family body "Break", in three doors (commercial) and five doors, with a more conventional hatch. The initial sedan was replaced in 1979 by the GSA, with a more conventional compact shape (hatchback). The GSA differs from the GS by the front grille, plastic bumpers, rear light clusters, hubcaps and the door handles. The handlebars of the first generation, embedded in the bodywork, were not liked in Speed, they were difficult to use and uncomfortable.

In the interior, designed by Michel Harmand, the dashboard with a cyclops eye speedometer (like the analog scales), with a dial indicating the speed, a color to warn of the impact on consumption and the distance needed to stop the car in meters. In the right-hand drive models, as well as in the GZ Birotor and late 70's models, the instrumentation was conventional. The handbrake is in the centre of the dashboard, like a handle, and the gear lever is on the floor, another novelty in Spain. The radio is placed between the front seats, in an upright position. 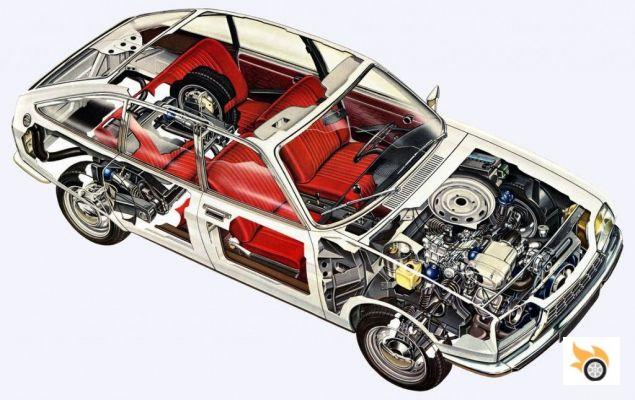 The chassis, made of light alloy, has a fully independent suspension. It has parallelograms at the front and articulated arms on the rear axle, with stabilizer bars on both axles. For the damping it relies on a gas that acts as a spring, contained in a sphere. In principle it was a maintenance-free system, but the spheres ended up being problematic components due to leaks.

This suspension allows the bodywork to be kept completely stable, no matter where it is driven, and is capable of driving with a flat or a completely dismantled wheel. According to testers at the time, the car's handling was fairly neutral, and contemporaries feel similarly. The active safety implications of hydropneumatic suspension have been recognised for decades, and Citroën was able to exploit them in television advertising.


The suspension can be adjusted in height via a control in the passenger compartment, with four adjustment positions. After several hours, when the pressure in the circuit decreases, the car ends up in its lowest position. Being able to raise the height was very useful for driving on dirt roads in France, long before the SUV fever. But there's another great advantage of the hydropneumatic suspension.

Before that, let's talk about the brakes. It had four discs, 270 mm diameter on the front axle and 178 mm on the rear. It had dual independent circuits, parking brakes on the front wheels and a sort of ABS, long before the Bosch electronic brakes were available. In addition, with the front brakes just outside the differential, traction losses were reduced to a minimum.

The braking force on the rear axle varied depending on the load.

Speed magazine reported that it was very difficult to lock the wheels because of the progressive and quick response of the brakes, so the driver had a lot of control over pedal metering. In addition, the hydropneumatic suspension glued the rear axle to the ground, increasing the effectiveness of the rear brakes. No electronics, no gaitas, it was a mechanical system, but very well designed. There is no brake pump, the pedal has hardly any travel.

The rack-and-pinion steering, although not a technological revolution - it was a Citroën innovation in 1936 - offered tremendous stability. One of the commercials shows the car passing between the gap left by two oncoming trucks, with a flat tyre just before the junction. The combination of steering, suspension and brakes gave the GS exceptional active safety for its time.

Again this car surprised by using aluminum boxer engines, four cylinders with overhead camshafts, air-cooled. The displacements were 1,015, 1,119, 1,222 and 1,299 cubic centimeters, between 55 and 71 hp power. The smaller engine owed its size to French tax regulations. They were very reliable due to their mechanical design, but in the workshops that did not have the specific tooling for this car, they sometimes made a mess of things.

The hole for the crank was kept, in case of failure of the starter motor.

The GS had a four-speed manual gearbox, the GSA had a five-speed manual gearbox. The latter reached 164 km/h, creditable considering the power. As an alternative to the manuals, a three-speed automatic transmission, the torque converter C-Matic or Convertisseur, was offered.

Between 1973 and 1975 the GS Birotor (or GZ) with a 1.0 Wankel engine shared with the German NSU was produced in small numbers. It produced 107 hp and raised the speed up to 175 km/h, but with a much higher fuel consumption. The oil crisis of 1973 changed things a lot, and Citroën decided to sell it off quickly. In fact, it was launched on the market in October 1973, at the time of the Yom Kippur war that led to the oil conflict. Only 847 units were sold, Citroën repurchased many units and scrapped the engines, so as not to have to provide spare parts.

The range initially consisted of three versions, GS Special, GS Club and GS Pallas, in order from the least equipped to the most luxurious. There were "sporty" versions called X, X2 and X3, with specific seats, improved equipment and the option of a short gearbox to improve acceleration.

French production was discontinued in 1986, when the BX had already been on the market for four years, but production continued in emerging countries. The car was produced in France, Spain, South Africa, Portugal, Thailand, Chile, Mozambique, Rhodesia (now Zimbabwe), Indonesia (until 1990) and Slovenia. Citroën says that 385,000 units were produced in Vigo according to the factory's website, and in this week's press release they lower it to 153,983 units (I imagine they are only referring to the GSA).

When sales ceased in Western Europe, it didn't have a direct equivalent until the arrival of the Citroën ZX, and none of its successors had such revolutionary suspension again. It is one of the most successful cars of the French brand, and in Spain it was a milestone in its day, being an affordable "luxury" car, and incorporating technical solutions that were unheard of in domestic cars.

Finally, let's take a look at the different interiors. The first image corresponds to a GS with cyclops eye instrumentation, the second is of a more modern GS Club, and the third is of a GSA. In the more modern model, multiple controls were placed in two columns on the sides of the steering wheel, so that you didn't have to move your hands from the steering wheel. They were not popular due to their complexity. You can also see a more futuristic instrumentation and a more eighties dashboard.

The Citroën Dyane celebrates half a century ❯