Citroën C5, a sedan with a difference

It was 1995 when PSA's president at the time, Jacques Calvet, decided it was time to replace the Xantia, which had delivered somewhat mixed sales results: very good in some countries, such as the UK, and not so good in others. At the time, the legendary Robert Opron was already retired. Opron was the creator of such legendary models as the 1967 Citroën DS, the 1970 SM and GS, and the 1974 CX. President Calvet wanted a change of direction in design, and when Opron left in 1983, he hired Arthur Blakeslee, an American born in 1935, who had previously worked for Chrysler and Talbot.

It was Arthur who "perpetrated" the design of the first generation of this sedan. I say "perpetrated", because in my opinion he created a design with some unflattering elements. Of course, other people will find it beautiful, but I don't. We'll come back to this later. We'll come back to this later. As we were saying, Arthur Blakeslee at the head of the design department until 1999, supervised everything and so it was presented at the Paris Motor Show on September 30, 2000. 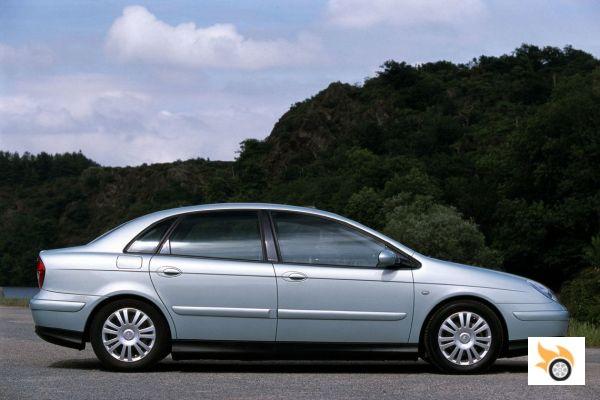 This first generation, with code DC/DE and commercial name C5, was Citroën's return to the "Cx" nomenclature, replacing the "x" with a number, corresponding to the segment to which the car belongs.

From a design point of view, it broke with the two-volume design that Citroën had previously used for this segment. While it's true that the Xantia was already a 2.5-volume, the C5 was clearly a 3-volume, but it didn't get rid of the tailgate. As I said before, looking at it, there seems to be something wrong with the design. That something may be the height, as it was the tallest sedan in its segment at 1,476 mm, with the suspension in the normal position.


Not only that, the proportion of height of the front wing, made it look like a sharp and almost minivan design, at the expense of losing the elegance of a horizontal hood, with a wheel arch almost glued to it. In this sense it reminds me a lot of the new Toyota Prius or Mirai. With a generous wheelbase of 2,750 mm, a length of 4,745 mm (4,839 mm for the Break or ranchera) and a width of 1,770 mm, guaranteed a very generous habitability. If you want to refresh some key proportions in cars, you can read this article. 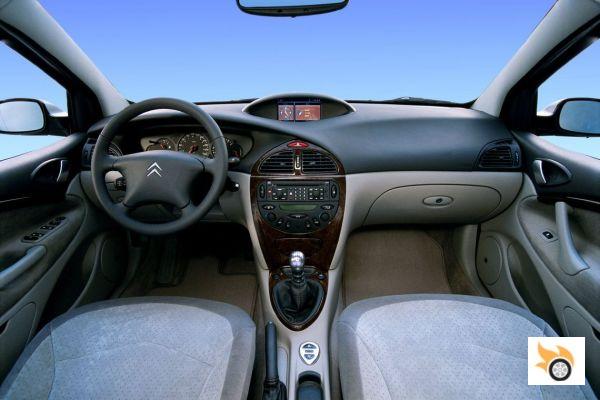 Of course, the Citroën sedan could not do without the famous hydropneumatic suspension of the house, premiered in his legendary DS: Hidractiva 3. They revised the system, making some updates such as electronic sensors to regulate the height automatically according to speed, although it still maintained the manual height control, in case we did some country adventure. Another change was to separate the hydraulic circuits that were previously shared.

Remember that, in the previous models, the suspension, power steering and brakes shared the same hydraulic fluid. This made it possible to use other PSA systems, such as electronic brake distribution (EBD), which were built for conventional brake circuits.

As for the engine and gearbox combination, the variety was staggering: six engines and four gearboxes. Three naturally aspirated petrol engines, the 1.8 (113 bhp) and 2.0 4-cylinder (136 bhp), and the range-topping 3.0 V6 with 207 bhp. In diesel (HDi), had 2.0 and 2.2 engines with power ranging from 90 to 136 hp. These engines later had some updates in power, but maintained the displacements, up to 173 hp incorporating the twin turbo 2.2.


As for gearboxes, had two manuals, with five and six gears, and two automatic, one quite old four-speed, and the most modern, six-speed.

Manufacturers are accustomed to us to some aesthetic and equipment retouching, when the vehicle reaches the middle of its life, and the C5 could not be less. Especially when the new designer, Jean Pierre Ploué, arrived at Citroën in 1999 and found the C5 ready for production, with no room for manoeuvre to tweak it to his liking. The arrival of the new designer came hand in hand with the departure in 1999 of president Jacques Calvet and his replacement by Jean-Martin Folz.

With all this turmoil behind the scenes of power, Ploué reworked the original design as a transition to the second generation. It was presented on 25 September 2004 at the Paris Motor Show, and changed the front design, with new headlights and rear lights, while keeping the rest of the elements almost intact. Slight equipment changes were also introduced inside, and maintained both suspensions, as the power plant.

All these changes, would give a little push to their sales reaching 720,000 vehicles sold, waiting for the major renovation that awaited him 4 years later, and with which Citroën wanted to significantly increase its market share in this segment. 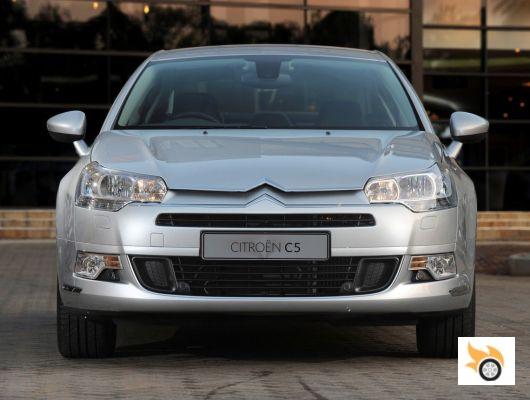 Prior to the presentation of the second-generation C5, Citroën unveiled the Airscape at the Frankfurt Motor Show on 18 October 2007, a beautiful convertible coupé that showed us the outlines of the new C5 that was to arrive shortly afterwards. On 15 January 2008, at the Brussels Motor Show, and breaking with the tradition of its September presentations at the Paris Motor Show, the brand showed the second generation of the C5.


In this case, it had started from scratch in the design and conception of the vehicle, achieving a much more harmonious figure in its shapes and proportions, than those designed by Mr. Arthur Blakeslee. The design has a robust, German-inspired appearance, something that was heavily criticized by Citroën fans. Not surprisingly, Ploué worked for Volkswagen in Wolfsburg and Ford in Cologne, and the artist behind the exterior design, Domagoj Dukec was born in Frankfurt (now at BMW), so some German inspiration had to be seen in the new C5.

Going into the analysis of this second generation, called RD/TD, we can say that it recovers the proportions of a traditional sedan, correcting that dissonant proportion of the previous design of the height of the front wing with respect to the hood, and delaying the windshield, while lowering the overall height of the vehicle. We have made a composite of the first generation with the facelift, and the second generation. The differences are not big, but enough to give a completely different image. The size increases in all its dimensions, except the height that decreases 21 mm, getting a wheelbase of 2814 mm, a length of 4778 mm (4829 mm Tourer version), a width of 1852 mm and a height of 1455 mm (1471 mm Tourer version).

In terms of design, the front changes significantly, with more raked headlights, and a redesigned grille, giving prominence to the two chevrons, following the trend of the tweaks that were made to the first generation. At the rear, the changes are not only in new pilots. The protagonist is the rear window, which is concave at the bottom and slightly convex at the top. We have to assume that this was a big challenge for the manufacturer of the new C5's windows. And continuing with the new features, we find ourselves, now, with a real four-door, definitely losing the tradition that marked an era in the house.

But the new features don't end there. For the first time in Citroën, one of the sedans would not have hydro-pneumatic suspension as standard: a conventional spring-shock suspension was offered. Although the optional Hydractive 3+ suspension was available as an option, it was still an improvement on previous models.

As we can see in the photos, the front suspension is double wishbone, with the typical spheres on the top, if it had the Hidractiva suspension. At the rear we find a multi-link suspension, with longitudinal arms, and upper triangle. It is worth mentioning the tunnel that joins both sides of the suspension, which gives rigidity to the whole, and facilitates the assembly of the rear axle, being in one piece.

This type of suspension has always been one of the most advanced on the market, offering something extremely advanced, which was only found in much superior vehicles, but at a reasonable price. It is a rather complex system, which varies the flexibility of the damping and ground clearance. In its simple version, it has four spheres, one per wheel. In the 3+ version, it also offers three additional spheres, to vary the flexibility in a higher range. We leave you with a couple of videos explaining how it works.

As for the interior, the change is considerable, resulting in a much higher perceived quality than its predecessor. Continuing with the new features, the new C5 incorporates the steering wheel with fixed interior controls, something that helps to press the necessary buttons, as they always remain in the same position. In addition, as an extra safety measure, the airbag always deploys to its optimum position.

Despite being an affordable and well-equipped sedan, its sales were not what was expected, so it received a small redesign in 2011, and another one in 2012, changing some engines, improving and modernizing the equipment. Still, its sales didn't improve much, because the C5 had to live in a very bad time for the D-segment: SUVs were (and still are) the new stars of the market, and the rest is mainly eaten by the Germans, especially in the D Premium category. 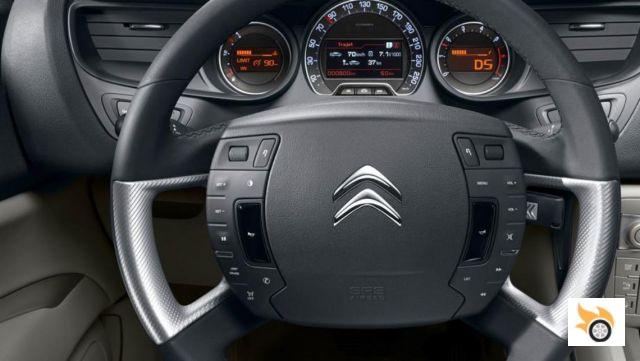 In total, according to our data, the second-generation C5 has sold around 590,000 units, mainly in Europe and China, where it continues to be marketed. In fact, it seems that a redesign of the sedan is being prepared for 2018, which will be marketed exclusively in the Asian country. As you know, sedans enjoy very good commercial health in China, so Citroën's strategy makes sense.

And as we mentioned at the beginning of the article, what we do know for sure is that Citroën is going to revive the C5 in Europe in 2020. Have they gone mad at Citroën? Are SUVs going to make way for saloons again? In a few years' time, the answer will be clear. 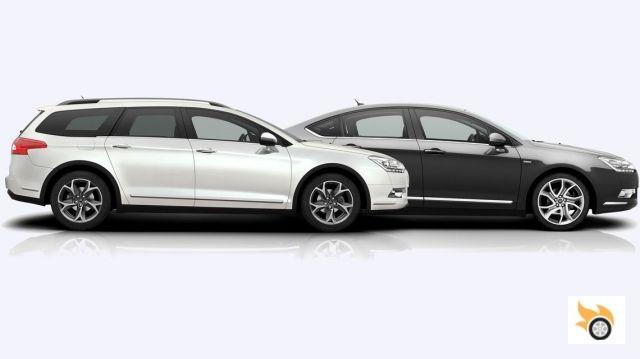 A brief introduction to Nissan's history at Le Mans ❯

add a comment of Citroën C5, a sedan with a difference