To tell the truth, those engines were already designed to be able to meet Euro 6 with minimal modifications, so why not do it that way from the start? It would be the most ecological thing for them to do, not to wait for the law to force them to do so, but we are talking about modifications that cost money. The new Euro 6 models, which are already in dealerships, have a price increase of between 100 and 300 euros, and according to Nissan, that money does not cover the cost of the changed parts.

Besides the price increase, what will the end customer notice? Nothing. The announced consumptions are exactly the same, they are modifications made to pollute a little less. It may be that in the future access to certain cities will be more complicated for those with Euro 5 cars, and Euro 6 cars will have it easier. Otherwise, the "Nissan Pulsar 2016 range" does not experience any other changes, except for the price hook. It has been lowered by 1,000 euros, so we are talking about 12,900 euros for the basic model, in the most advantageous conditions possible. 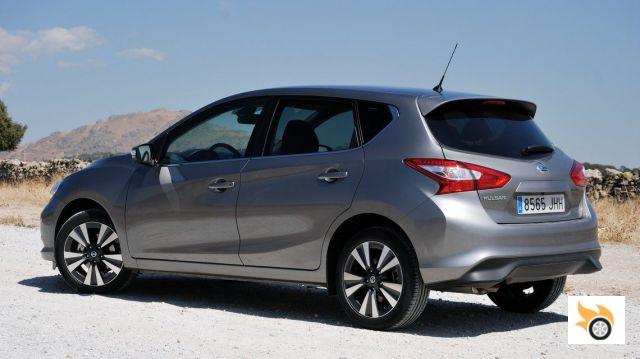 According to Nissan, this covers 80% of the C-segment.

The most chosen engine is the basic gasoline, with 48% of sales with manual gearbox and 8% if it is automatic. The diesel gets 43% of customers, and a pyrrhic 1% choose the 190 hp petrol engine. By finishes, the most popular are Acenta (42%), N-TEC (37%), Tekna (8%) and Visia (13%). The manufacturer says the range is "complete" and more engines have been announced. If you want to know how the 190bhp 1.6 DIG-T performs, I refer you to my colleague Daniel's review.


The petrol DIG-Ts have been updated mainly in terms of electronic management, with modifications to both hardware (parts) and software (programming). The other emission reduction measures remain the same: variable valve lift (VVT), variable flow oil pump, cold EGR valve, coating of the cylinder liners with less friction or a direct injection pressure of 200 bar.

As for the diesel engine, the changes are a little more significant. The monolithic catalytic converter has been replaced by a device called a "NOx trap" (LNT), which is placed between the exhaust manifold and the particulate filter. The purpose of the "trap" is to naturally dissociate nitrogen oxides (NOx), without the need for additives, into neutral gases that are already present in ordinary air. 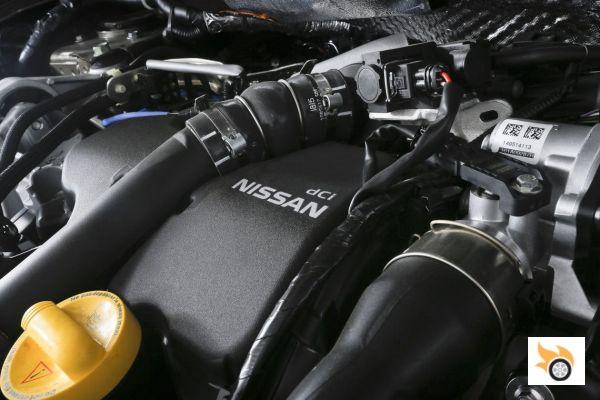 Barium, platinum and rhodium are used to carry out this chemical reaction, in this order. It is not necessary to use selective catalytic reduction (SCR) on this car, as it is a more expensive and complex system, and requires the refilling of the additive (urea) at maintenance intervals. In theory, the owner can forget what LNT is, and what it is for, it has no specific maintenance. Just keep in mind that it is effective only when it is very hot, so very short trips with a cold engine make the car pollute more than usual.

The efficiency of the system depends on the amount of sulphur in the fuel, a component that temporarily "poisons" the LNT and reduces its efficiency. When we asked the development manager of the technical centre whether it is necessary to use "premium" diesel with lower sulphur content, his answer was negative. Given the quality of the fuel served in Spain, it is not necessary. However, he does not recommend us to travel with the car to exotic places like the Maghreb, where the quality of diesel is not the same as in Europe.


Another important modification of the 1.5 dCi engine is the adoption of steel pistons instead of aluminium.

By using a special alloy, the manufacturer claims that lower friction levels are achieved, with a very similar weight. After all, 44% of the engine's friction is caused by the pistons rubbing against the cylinder rings. Otherwise, the engine is exactly the same, although the electronic management is much more advanced, it is not a simple "repro". The control unit now monitors "16,000 parameters" (sic), in the words of the head of development at the technical centre. 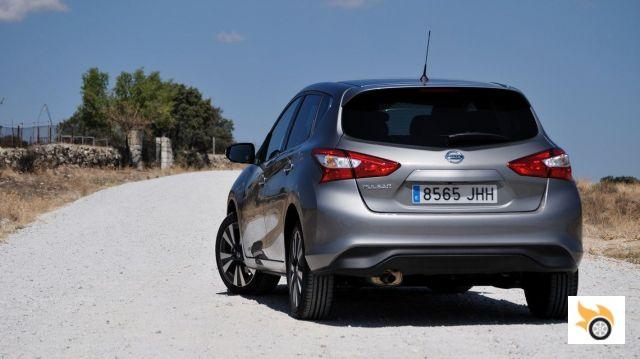 Brief test of the 1.2 DIG-T with XTronic automatic gearbox

Given that you wouldn't notice any difference when driving the car, I chose a version I hadn't yet touched, I already know the 110bhp diesel. The only automatic option in the range is linked to the 1.2 DIG-T engine, with four cylinders, direct petrol injection and turbocharger. Not to be confused with the DIG-S, which uses a volumetric compressor. This engine is the natural successor to the naturally aspirated 1.6 (117 bhp), which was hopelessly lacking in character and maximum torque.

Thanks to the use of the turbocharger, between 2,000 and 4,500 RPM there is 190 Nm of peak torque, and 95% available throughout most of that range. It doesn't need to be pushed and revved to achieve power, it has almost the feel of a 1.6, but with more character, and is clearly more refined than competing three-cylinder engines with similar power.


What's so special about Nissan's automatic transmission? It's neither a robotised manual nor a torque converter.

It consists of two pulleys linked by a steel chain, which constantly change the transmission ratio. In other words, it's a continuously variable transmission (CVT). It has seven preset ratios, which if the driver wishes, can be forced using the gear lever, or rely on the automatic (D)/automatic sport (Ds) mode. There are no steering wheel paddles or optional paddle shifters. The preset gears do not increase acceleration, but they do influence the engine's holding power, for example, going down a mountain pass. 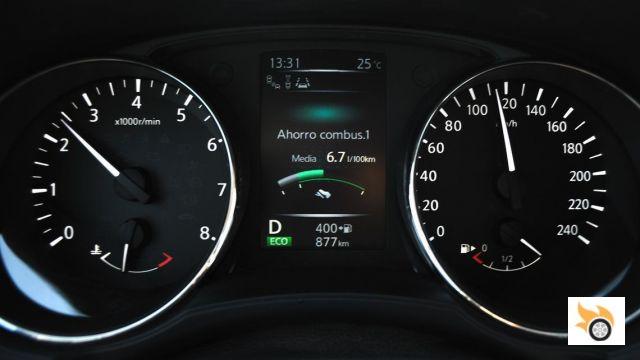 Theoretically, the car consumes 5 l/100 km with a manual gearbox, a couple of tenths of a second more if it's XTronic. The efficiency of the gearbox is 85%, the rest are losses. It is programmed so that the engine does not remain "stuck" in a regime when accelerating, which is what usually despairs the non-habitual user of a CVT.

According to Nissan, it has 1,000 stored shift patterns, so it offers a more natural feeling acceleration.

For example, the difference compared to a Toyota/Lexus hybrid (e-CVT) is considerable, and beware, mechanically it is not the same system but the effect is very similar. In the first kilometers of driving, in the traffic of Madrid and with a cold engine, the average consumption was alarmingly high, when leaving the city it had barely dropped below 10 l/100 km, but it has been stabilizing. Although it took more than a few accelerator pedal strokes, the declared consumption dropped below 7 l/100 km from halfway through the journey, and there it stayed, at 6.7 l/100 km.

The engine is barely audible at steady speeds and inclines, and tends to rev as low as a diesel. You start to notice its purr when it gets above 3,000 RPM, the isolation work on this car is very good. The transitions from one gear to another are not very noticeable in sequential mode, but in the automatic we can forget about the concept of "gear". In theory, the engine is better used in this way with respect to consumption, although it appreciates the low and medium load situations compared to those of high demand. 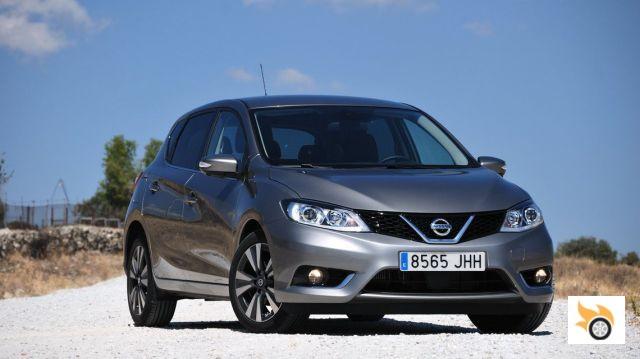 To tell the truth, for a petrol it has a very reasonable fuel consumption, but I have seen engines of this power spend less and with higher displacements in the competition. Also, the dCi engine spends considerably less in the same conditions. When I tested this engine in the Pulsar - which is rated at 3.6 l/100 km - I averaged 4.3 l/100 km according to the computer, and the actual fuel consumption was very close to that figure. It doesn't matter if that engine was Euro 5, the Euro 6 gets the same.

I would also like to highlight the fact that the Nissan Pulsar's Stop&Start system, standard across the range, is lazier than competing systems. For example, Mazda's i-Stop keeps the engine off much longer, and the Pulsar's fuel savings are ridiculous. When I tested the diesel, in 980 kilometres of testing I barely saved enough diesel to do 3 measly kilometres. Testing this petrol, the engine was stopped... seconds, and it took me a long time to cross the Paseo de la Castellana at the end of the test.

In short, it's an update for engineering purposes, and on a day-to-day basis it's not something that should keep anyone awake at night. Euro 5 and Euro 6 are supposed to have the same mechanical reliability, service intervals and fuel consumption. The only difference I can think of is the one already mentioned, that a system that classifies cars according to their level of pollution and makes things more or less complicated for them.

We say goodbye with a thorny issue, the said particles of gasoline.

By the way, according to the TÜV, engines like the 1.2 DIG-T, what I call "turbocharged", with direct injection, small displacement and turbo, can emit many more particles than diesel, and of a larger size. Euro 6 does not require particulate filters to be installed in petrol engines, and until it becomes mandatory, neither Nissan nor its competitors will do anything about it. My colleague Guillermo already denounced it on more than one occasion, a piece that costs tens of euros could clean a lot of the air emitted by these engines.

The New Stratos, history and contact with the beast ❯

add a comment of Nissan Pulsar adapts to Euro 6