Are cars more expensive now than they were thirty years ago?

The evolution of the automobile industry mixed with the competitiveness between manufacturers has meant that we have bigger and bigger cars, safer, more fuel efficient and equipped with much more technology, and they cost us less to buy. Or at least that was my personal perception. Was I wrong? Was I right?

Instead of taking two random pieces of data to prove my theory, what we have done this morning is to spend a few hours getting all the data we need to have a large enough sample, from 1983 to now, to play with.

On the one hand, we have obtained the price data of the "least powerful" turbo diesel Golf of each era (we have discarded the naturally aspirated diesels) in three-door bodywork, from the second generation to the current one. In addition, we have corrected their prices with the INE inflation calculator to see what they would represent today.

At the same time and in parallel, we have also obtained from the INE database the typical average salary that workers received in each year. The methodology of the survey to obtain this data, according to the INE, changed from 1999 to 2000, so you will see that in the average wage table there is a significant drop between 1999 and 2003, although the INE explains that, in reality, if the same methodology originally applied had been kept, the wage would have continued to grow (basically due to the adaptation to the euro).

The resulting table is as follows:


There are a lot of interesting conclusions to be drawn here, really. Let's start with the "real" price progression. If we correct with the inflation calculator the price of the Golf over the last 32 years we can see the following graph: 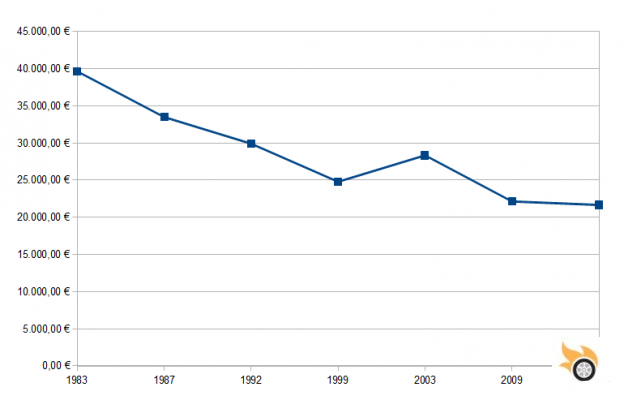 The intervals of the x-axis are not uniform (they range from four to seven years) so the slope of the line should not be considered as the "slope of cheapening" to use. In any case, it is remarkable to see how the prices of the most marketed Golf diesel have been falling to almost half the original price.

Not only that. Given that the purchasing power of Spaniards has improved a lot in the last 32 years (despite two crises in between), we have run the comparison "car price - average annual salary at the time" to generate the following graph: 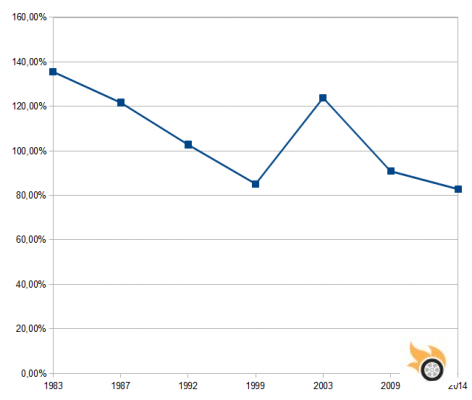 This second graph gives us two peculiar readings. The first is if we consider the first and the last figure. The price of a 70hp turbodiesel Golf in 1983 meant having to spend 1.35 times the average annual salary to be able to buy one. Now (well, 2014 data), it's 0.82 of the average annual salary of a worker. So yes, the financial effort in 2014 to buy the "normal" diesel Golf in Volkswagen's range has reduced considerably.

It is curious to see how in 1999 the sample diesel Golf was already cheaper than the average annual salary, and how after the introduction of the euro we experienced a considerable upturn in purchasing effort (we went from 85% to 123%). While this effect has to do with the wild rise in costs with the change to the euro that we live in Spain, it also has to do, as I said above, with the change of measurement system of the INE in terms of average wage.

Obviously, what tends to mislead people is to look at the "conventional" price list without correcting for the CPI. If we stay with the "pure and simple" price we see how, indeed, it gives the feeling that prices have increased, but the real comparative analysis, correcting the consumer price index and correcting the increase in purchasing power show how today we can buy more powerful cars, safer, that spend less fuel, for less money and with less effort to pay for them.

And before you brand me as "TaliVAG", I will tell you that this operation is valid for almost all the models of great diffusion that populate our market. If we have chosen the Golf is because it is a car that has been on the market for a long time, has an established position, and it was easy to track its annual cost.

Another interesting point is to see the evolution of the size, power and consumption of the cars. The second generation Golf is the same size as a current Polo, and has grown over 32 years by 270 millimetres, or 6.8%. Its power has increased by 57%, from 70 to 110 horsepower, while its weight (which does not appear in the table) has risen from 980 kilograms in 1983 to 1,265 kilograms now (29% more). The power to weight ratio in 1983 was 14 kilograms per horsepower, now it is much better, 11.5 kilograms per horsepower (almost 18% less), thus banishing another characteristic myth: No, the power to weight ratio of today's (high volume) cars is not worse, even though they have grown a lot.

There are a few more curious considerations from this little study. For example, if the trend line had remained as it was, without the introduction of the euro it seems that right now buying a Golf TDI 110 hp would represent only 65% of our average salary in Spain.

Anyway, I hope we have been able to demonstrate how the myth that cars were "cheaper before" is a hoax. You have the data here, now you can give your opinion with them as a back up.

Are four cylinders insufficient or unworthy for Chevrolet Camaro or Ford Mustang? ❯

add a comment from Are cars more expensive now than they were thirty years ago?