Service belt: what is it, what is it for and how much does it cost? 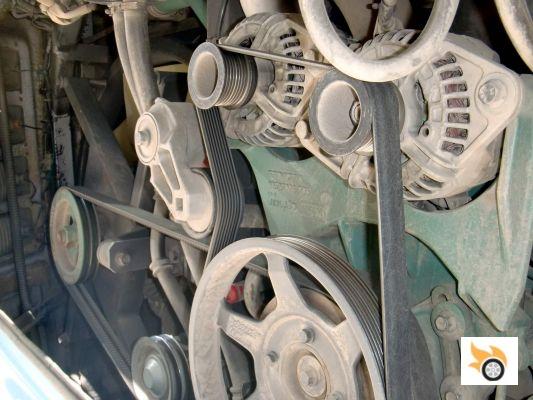 What is the utility belt?

The utility belt is a belt, a full rubber belt, which transmits the movement of the drive shaft pulley to the pulleys of pumps, components and other equipment of the car.

The service belt is composed of an artificial rubber often reinforced by the addition of other fibers. Over time, this rubber tends to harden and lose elasticity, thus becoming drier and more brittle. A single cut is enough to cause the service belt to break completely after a few kilometres or to wear sufficiently that it no longer slides properly in the various bearings.

A worn service belt does not efficiently transmit power to the components to which it is connected and this can soon become a problem for the car.

What is the service belt used for?

The main function of the service belt is to "share" the engine's movement and its mechanical energy with other parts of the car, allowing them to operate and perform their functions.

The service belt is directly connected to all the pumps that move the various fluids inside the car. For example, without the service belt the water pump and power steering fluid pump cannot operate. As a result, the engine does not receive enough coolant to remove heat and the car's steering becomes too heavy, if not dangerous, to drive.

Therefore, the service belt is responsible for the operation of many components, including the air compressor and air conditioning, the alternator (and therefore the charging of the battery), the water pump and the power steering.

What is the difference between the service belt and the timing belt?

Although it is very easy to confuse the two, the service belt and the timing belt play two completely different roles.

Without the timing belt, it is impossible to match the valve opening perfectly with the movement of the pistons. In fact, when a timing belt is damaged in motion the typical consequence is that the valves collide with the piston heads blocking the engine and causing thousands of euros of damage.

The timing belt plays a less "crucial" but equally important role in the operation of the car. As we have seen before, the timing belt allows the various fluid pumps and the alternator to run.

A broken service belt rarely causes as much damage as a broken timing belt. However, a broken or damaged service belt makes driving much more difficult, if not impossible.

Although very similar, the two belts are often distinguished by their appearance. While the timing belt almost always has a side full of notches or teeth to grip the drive shaft, the service belt has no notches or teeth and is more slender.

How many miles apart do you change the timing belt?

Service belt: when do you change it? This is one of the questions drivers should ask themselves. Well, there's no real time frame for changing the service belt.

As a component subject to wear and tear, belt checks will increase as the number of miles driven increases. It is usually advisable to inspect the service belt at least once a year to make sure there are no tears, nicks or grooves due to wear.

How much does it cost to change the service belt?

Changing the service belt is an investment in the life of your car. If you decide to postpone it or not do it at all, the damage caused by a broken service belt will be far greater than what it would have cost to change the service belt alone.

But how much does it cost to replace the service belt? The cost of changing the service belt varies from model to model. The service belt itself usually costs around 15-20 euros. If the belt tensioner bearings or belt rollers also have to be replaced here, the cost of spare parts can rise to around 50 euros. To this must always be added the price of the mechanic 's labour which, if he is competent and honest, should not take more than an hour.

The total cost of changing the service belt therefore varies from 70 to 150 euros, depending on the spare parts purchased and the mechanic's working hours.

add a comment of Service belt: what is it, what is it for and how much does it cost?