The basic problem is that Alfa Romeo had among its facilities a huge factory, that of Portello, which during the war years had grown to accommodate the production of war material. Keeping the workers busy and taking advantage of the installed industrial capacity were vital points for the economic recovery of the company and of the area.

The factory had been extensively bombed in 1943, with more than 60% of the facilities reduced to rubble. But the help of 5,000 Alfa Romeo workers and public money managed to recondition it to continue producing cars within the pre-war line. 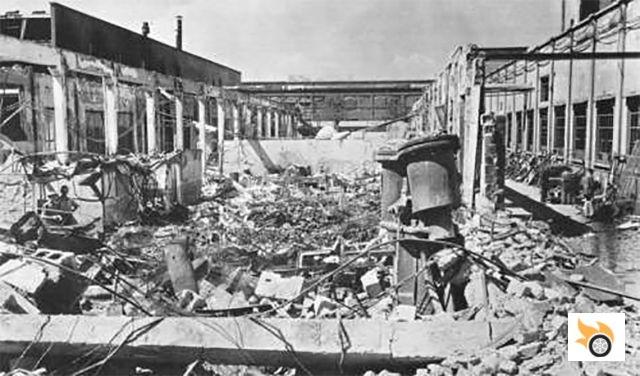 Remains of the Portello factory after World War II

Until the end of the war, Alfa Romeo had been, in any case, a luxury brand. Concentrating on making Grand Touring Cars, its commercial space would be the equivalent of Maserati right now, with very high performance cars and typically Italian design, joining Ferrari in terms of sporty approach and Grand Prix successes.

Finmeccanica put Giuseppe Luraghi in charge of Alfa Romeo, and it became clear to him that the company's viability was to build cars in a serialized way and not handcrafted, in respectable volumes. Until 1950 less than 15,000 cars had been produced by Alfa Romeo since its conception, and we are talking about a company that by then already had forty years of history behind it.

Luraghi bet big. He thought of creating a new type of visionary car. It would be a sports sedan, mass-produced with modern technology and a price that, while not cheap like Fiat's cars, would be accessible to the upper-middle classes. It would have to retain the brand's mythical performance approach, so as not to be unfaithful to its heritage, but at the same time it had to be mass-produced.


Thus was born the specifications of the project that would eventually give birth to the 1900. The aesthetic designer was Orazio Satta Puliga, with Giuseppe Busso as technical manager. Among the many aspects considered at the beginning of the project was to create an economical front-wheel drive sedan, but fortunately, in the end a traditional configuration was chosen.

After years of focusing on selling cars with six or eight cylinders, Busso would create for the occasion a new steel engine with light aluminum alloy cylinder head with twin overhead camshafts and chain timing with four cylinders. Many enthusiasts of the time took it as a joke "how can it be an Alfa Romeo with four cylinders?

But the engine was a real technical gem. With 1.9 litres of displacement and a twin-barrel carburettor, the engine delivered ninety horsepower to the rear wheels.

The frame became a steel monocoque, taking part of the technique developed in Wifredo Ricart's Gazzella project during the Second World War. The front suspension was by double overlapping triangles while the rear suspension was provided by a rigid axle controlled by two longitudinal rods articulated on duraluminium bushes. 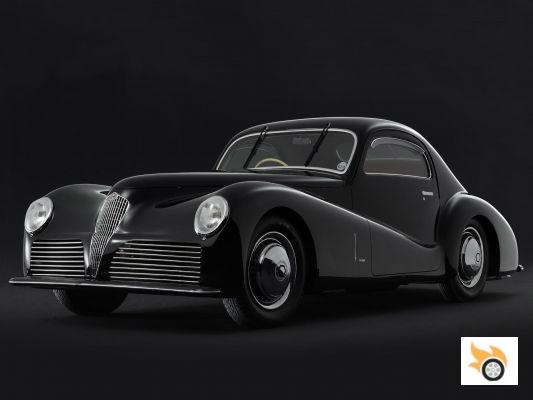 Aesthetically, the 1900 established to a large extent the elements that would make an "Alfa" an "Alfa". In Wifredo Ricart's 1943 Gazzella project, for technical and aesthetic reasons, the aesthetic idea of a very slender triangular radiator grille guarded by elongated lower grilles was explored. It was not a completely original concept from Alfa Romeo's technical department. The original idea of this type of trilobule had been explored for the first time in the bodywork for the 6C 2500 developed in 1942 by Touring and Bertone, especially the latter with the 2500 Coupe designed by Mario Revelli di Beaumont. This idea of the triple grille caught on and Alfa Romeo made it its own in the aforementioned Gazzella project. 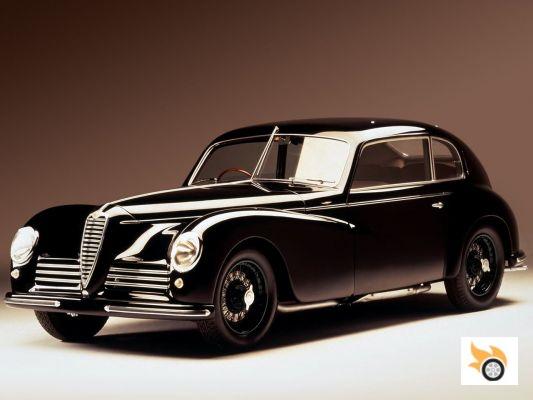 This idea came from previous iterations of the typical Alfa Romeo radiator grille, which had already taken the shape of an inverted isosceles triangle. On the 6C 2500 Freccia d'Oro (Golden Arrow) of 1946, it would go one step further. Since the Gazzella was never marketed, the bodywork of this new sedan, the first model produced with a certain volume after the Second World War, would inherit the concept of the "trilobe", which was the trio of front grilles that would become Alfa Romeo's front identity, inspiring all its front design in the Bertone coupé. 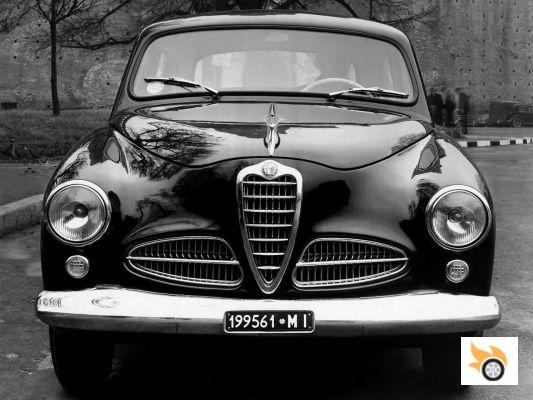 The 1900 was responsible for establishing the "tri-lobe" as a characteristic Alfa Romeo element.

Well, Satta Puliga, starting from the 6C Freccia d'Oro, would develop the concept of the "brand image" for Alfa Romeo, creating a very characteristic front end for the 1900, where the design of the car started from the inverted triangular grille and the lower air intakes were kept in a horizontal position.

The rest of the car's proportions were relatively classic, although well matched in terms of the control of proportions between wheelbase, overall length and wheel diameter selection. With a length of 4.4 metres and a wheelbase of 2,630 millimetres for a height of 1,490 millimetres, all with a shortened front overhang, thanks to the use of a front-longitudinal engine behind the front axle, the 1900 had a modern and dynamic appearance.

Another of the aesthetic keys applied by Satta Puliga was to create the car without overdoing it with unnecessary baroque additions. The purity of the design, in side view commanding the rest of the aesthetic decisions, was key, following the Italian school of automotive design, with guidelines that we can still see today applied to the new Giulia. 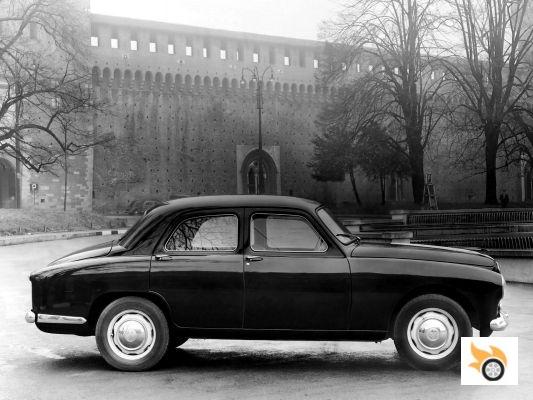 After many months of work, the final product achieved a respectable top speed of 150 kilometres per hour. The first units were completed on 2 March, making it the first mass-produced Alfa Romeo in the company's history. By the month of May it was already presented in society at the Turin Motor Show, before officiating the dynamic presentation for the media in October of the same year, in Milan.

Alfa Romeo was immediately successful. Few people expected Alfa Romeo to break into the premium D segment, and the prestige of the brand and the competitive price made orders pile up. 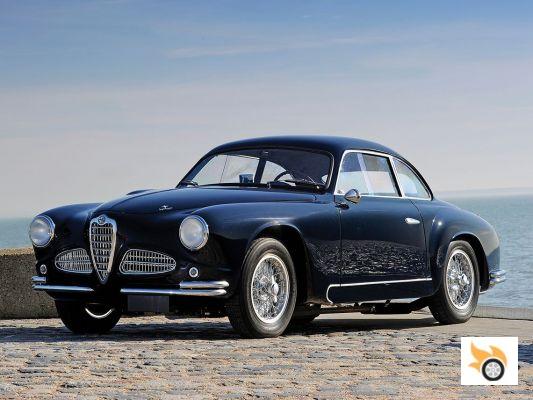 But the company didn't want to stop there. The brand's managers realized that with the use of monocoque bodies, the work of the coachbuilders would be complicated, but in order not to leave behind the business opportunity of creating special versions, Alfa Romeo tightened its ties with several of the specific coachbuilders to create special units. Thus in 1951 the 1900 Sprint was born, signed by Touring.

Like other models derived from the 1900 that would arrive later, the only aesthetic obligation Alfa Romeo imposed on the coachbuilders who wanted to launch products based on the 1900 was to keep the front trilobe, the house's trademark, something that not all of them did.

The 1900 Sprint of Touring had an engine with a tweaked carburettor, with a double body carburettor of larger dimensions than in the 1900, and with a higher compression ratio. In addition, the platform was shortened, with smaller wheelbase (2,500). 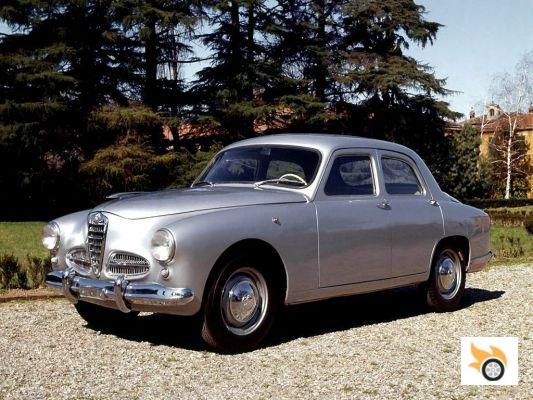 Taking this mechanics as a base, in 1952 Alfa Romeo would create a racing version of the 1900 saloon, the 1900 TI (International Touring Car), with which it would race in the Carrera Panamericana that same year. The sporting success would come in several events such as the Tour de France, which would serve to justify its mass marketing.

In 1954 the "Super" version appeared, with an engine power increased to 115 horsepower thanks to an increase in displacement to 1,975 cubic centimeters, which allowed it to reach 180 per hour top speed in its T.I. variant.

A total of 17,243 units of the 1900 would be produced in its normal and Super variants, plus another 612 of the TI and TI Super, as well as 1,796 of the Sprint and Super Sprit coupés. To all this we should add the multitude of special variants created by other coachbuilders, such as Ghia, Boano, Zagato or Pinin Farina, which, although in total there were only a few dozen, did not fail to add lustre to the 1900's commercial name.

However, production of the 1900 saloon would cease in 1959, and the 2000 saloon took its place on the market, taking a step upwards. While the 1900 could be considered a D-segment car today, the 2000 Saloon, with its 4.7 metres and wheelbase of 2,720 millimetres, was more in line with what today would be the E-segment, with a car that was more comfortable and comfortable, more representative than a sports car.

The launch of the Giulietta as a pseudo-segment C, positioned in a lower price range, but with a higher sales volume below the 1900 also allowed the 2000 to play upwards. But the 2000 would not have a long run. By 1962 the Giulia would appear as the true successor to the 1900, being more compact and economical than the aforementioned 2000, which in turn would evolve to become known as the 2600 in 1961, placing it already within what would be today's E segment, with a larger and more powerful engine.

And the 1962 Giulia will be our next stop in this collection of articles. 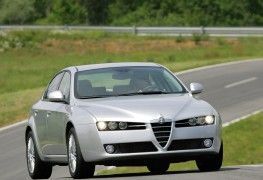 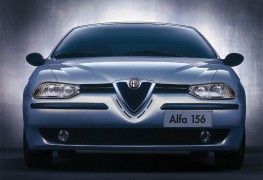 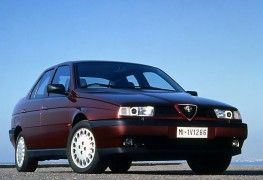 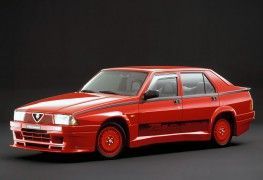 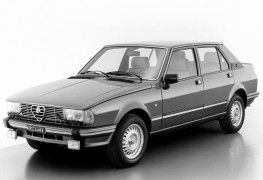