Since the founding of Volvo by Assar Gabrielsson together with Gustav Larson back in 1926, AB Volvo had never had a chief designer until the 1950s, when the Italians began to make their mark with their beautiful designs. At that time, Mr. Gabrielsson, president of AB Volvo, decided that it was time to create a saloon that would sell in large numbers and bring money into the company's coffers, in order to gain a foothold in the market. As Italian cars were beginning to be loved around the world, Assar decided it was time to create that one position the company was missing: head of design. 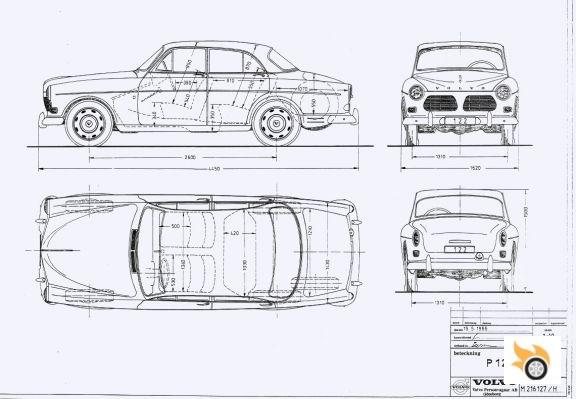 A young 26-year-old designer working for AB Volvo, Jan Wilsgaard - American by birth, with Norwegian parents, but Swedish by adoption - was called into President Gabrielsson's office. He was asked to design the new sedan to be launched by Volvo; he was also to design a coupé and a family car. Jan, for inspiration, took a walk around the port of Gothenburg - his father was a sailor - and there he saw American cars, the Kaiser Manhattans, being unloaded. This car inspired him and he went to the studio to draw.

At that moment, one of the best-selling series in Volvo's history up to that time was born, whose internal codes were P120 (four doors), P130 (two doors) and P220 (station wagon). These numbers are not to be confused with the model names, which do not have a "P" in front of them, and do not end in zero.

Jan Wilsgaard would become the first Chief Designer in the history of AB Volvo.

In 1956, just after the introduction of the Volvo Amazon, Gunar Engellau would replace Gabrielsson as head of AB Volvo. From that year on, all models were designed or supervised by Chief Designer Jan Wilsgaard, except for the Volvo P1800, but that's another story.


Why the name? At first they wanted to call it "Amason", in honor of the warrior goddess, but it was decided that "Amazon" would sound better, as it was intended to be sold internationally, especially in the United States, a key market for Volvo where it was not yet making a profit. They went to the trademark registration office and, surprise surprise: the name sounded too much like another one registered under the name "Amazone", a Kreidler motorbike.

An agreement was reached with this manufacturer, so that Volvo would sell it as Amazon in the Nordic countries, but in the rest of the world it would be known by three numbers. The four-door or 121 was introduced in 1956. Later variants were added, in 1962 the 221 was introduced, and in 1967, the 123GT, the sportier two-door variant. In the photos you see them in that order:

Since 60% of the Amazon was sold outside Sweden, Volvo began its international expansion, setting up factories in Halifax (Canada), Durban (South Africa) and Ghent (Belgium). For the first time, Volvo was making a profit in the United States thanks to Amazon. In total, from its introduction until July 1970 - when production ceased in Torslanda - more than 667,000 units were sold. It was Volvo's biggest success to date. 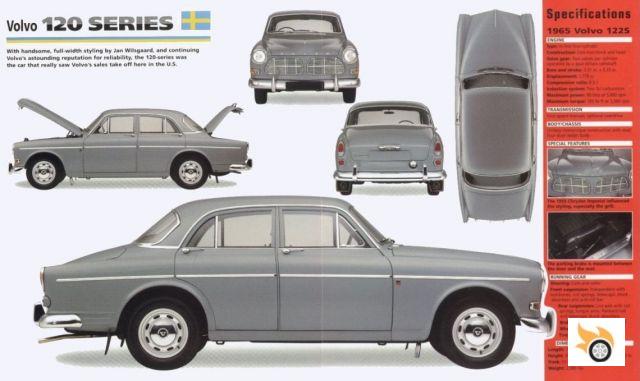 For our brief design review, we'll focus on the P120 sedan. Starting with the front end, we see that this is a sedan heavily influenced by the designs of the 1950s, but with some refinement. Let's look at the chrome grille, split in two, which leads to the hood, with the typical sculpted triangular protrusion that was so popular at the time. Flanked by two round headlights, above rectangular turn signals, the front end was finished off with a linear chrome bumper. The width-height ratio was typical of a sedan, although the windshield, somewhat smaller, wanted to print some more dynamism.


Moving to the side, we see the three volumes clearly, with the chrome strip that runs along the car from the front to the rear, to provide that linearity. When we get to the rear, we see the window and the trunk that decline smoothly, very Jaguar Mark I style, flanked by the fins, but much less exaggerated than in the Volvo P1800.

Finally at the rear we see some vertical pilots, located at the end to emphasize the width of the design, and protected by a linear bumper, which visually ends the car. A curious detail: the fuel cap is located on the right side, just above the bumper and under the trunk.

The cabin with horizontal lines, and not very prominent, is the standard of the time. Linear speedometer, double or three-spoke steering wheel, very simple satellite levers, and the heating controls in the center. Below the speedometer, fuel level, odometer and water temperature. Simple, but effective. An interesting detail: we can see in the photo that the 123GT version (right) incorporates a round rev counter in the center of the dashboard, facing the driver, to accentuate that sporty character.

The 121's rear seats were sufficient for three passengers, while the trunk was just the right size for five people's luggage.

If that's not enough, we could turn to the 221 variant, with more than enough space for the family's luggage and skis, which is important if you live in a country like Sweden.

Heading this section you can see the technical specifications of the Amazon's sportiest model, the 123GT. This sporty two-door borrowed from the P1800 its 115 hp 1.8 litre B18 engine. The Amazon 121 made do with a more modest engine, the B16B, with 1.6 liters, twin carburetor and 85 hp. Later came the B20, a 2.0-litre with 105 bhp. Since the Amazon was discontinued in 1970, it did not have the electronic injection that was introduced in 1971. The engines, as we can see, are the same as those of the mythical P1800, as they are contemporaries.


The same happened with the gearbox: both shared the same power plant. They started with a three-speed manual gearbox (M30), and evolved over the years to four gears with overdrive (M41). There was also the option of a three-speed automatic gearbox made by Borg-Warner. What I find curious is that two coupes, with a sporty character, with the same engine and suspension, but different design, coincided in time. It seems as if Volvo had put two designers in competition to find out what the market tastes were.

Back to technology, the Volvo Amazon has gone down in history for making one of the greatest contributions to passive safety in the car: the three-point seat belt. In 1959 all Amazons were fitted with this new type of seat belt. We still use it today, and it continues to save lives. It is estimated that this breakthrough in the Volvo Amazon has saved more than a million people over the past 57 years - that's almost nothing!

In terms of suspension, it had a double wishbone at the front, rigid axle at the rear, supported by two longitudinal arms on each side, and a Panhard bar. It is the same configuration as the P1800, also in the braking system: discs at the front and drums at the rear.

Some interesting stories related to the Volvo Amazon: 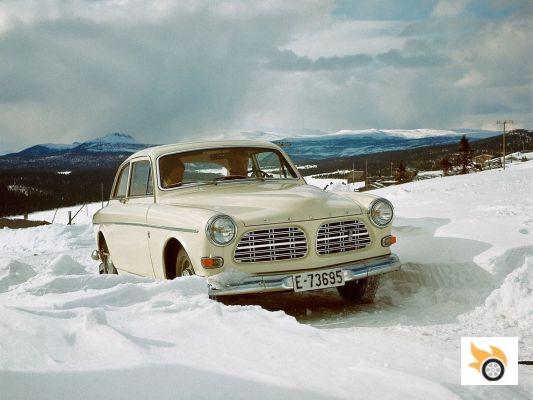 As we have seen, the Volvo Amazon was a key vehicle in Volvo's history, helping to strengthen its position as an international manufacturer. This week the "grandfather" Volvo Amazon is 60 years old and we have paid him this small tribute. Because we can't understand the present of the automobile without first looking at the past. And we love that, that's why we're pistonheads.