It all starts, like so many other German automotive stories, in the hands of Ferdinand Porsche and a request from a certain Adolf Hitler that you may know from watching him on the History Channel (he must have a subscription...). 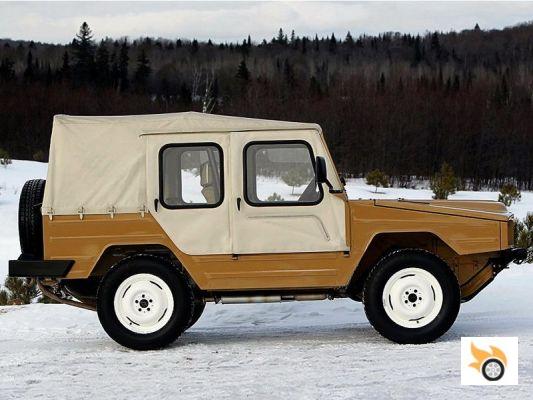 The year was 1934, and among the many talks between Hitler and Porsche appeared on the table the possibility of creating a variant of the original Volkswagen, adapted to the Nazi armed forces. Although Ferdinand Porsche explained to Adolf that the idea was feasible, it would not be until 1938 when Ferdinand's technical center would receive the specific order to develop a lightweight, economical military vehicle based on the Volkswagen.

Porsche would begin work on the Kübelwagen, or Type 62 (later known internally as Type 82) a kind of buggy that took many elements directly from the Volkswagen, but also evolved in many other aspects to be more effective to the demands of the army.

In a matter of a month Porsche already had a prototype, but its chassis bent very easily to the demands of driving "cross-country", so it decided to hire for his team to a bodybuilder specializing in military vehicles. 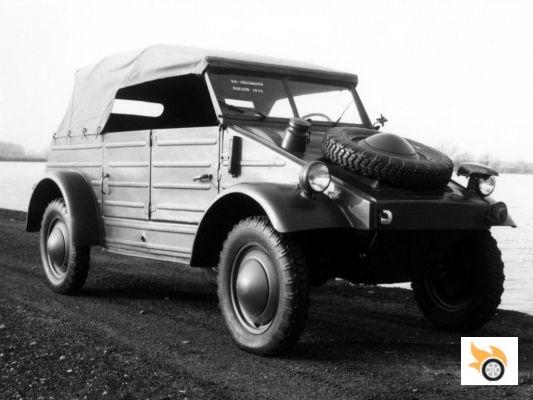 In a matter of a few more weeks, Porsche had succeeded in creating an all-terrain vehicle, which retained the air-cooled mechanics of the Volkswagen, but which incorporated such things as a ZF self-locking differential to increase its ability to traverse difficult areas, and numerous reinforcements in the chassis to make it robust enough for battle conditions.

The experiment pleased the Nazis, who gave their approval for serial production, which would start in 1940, as soon as the Volkswagen factory in what is now known as Wolfsburg, was operational.


During the next five years, until the end of the war, Volkswagen manufactured more than 50,000 units of this peculiar all-terrain vehicle, but after the conflict, and after analyzing the capabilities of the vehicle, despised by British and Americans, considering it far inferior to their Jeep, production was stopped, especially considering the ban imposed on the German people to continue manufacturing anything that resembled a weapon. 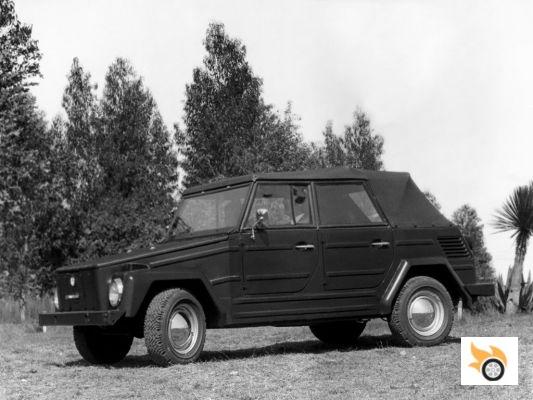 Jump forward in time. We go to the late 1960s. Several European countries belonging to NATO are looking for joint projects to work on. After the success of the Fiat G-91 (a success in terms of collaboration, although there would later be much criticism of this aircraft, which we will talk about in depth in future reports), the idea on the table now was to create a European-style Jeep to equip the armies with a lightweight vehicle capable of getting into any place.

To Volkswagen the idea sounded very similar to what the Kübelwagen had meant. In the mid-fifties the German government had already asked for a feasibility study to recover the old SUV, which had been out of production for a decade, but that offer had been rejected.

Now the company saw the idea with different eyes. The fever to create buggies from the Beetle platform was already a reality, and the "beach-buggies" were something interesting to explore in export markets. Volkswagen decided to recover the Küblewagen to try to meet the needs of the Jeep Europe project, and at the same time offer it to the general public to get more out of every euro invested.


But the problem, as with every European project of this type, is that things went spectacularly slow, with numerous disagreements on the basic requirements of the vehicle, its price, who had to manufacture it...

By 1976, and after millions of euros of public money had been spent, the Jeep Europe project was completely cancelled. Curiously, since 1971 Volkswagen was already selling the new version of the Kübelwagen, under the code Type 181, trying to amortize costs, but with a major sales fiasco. 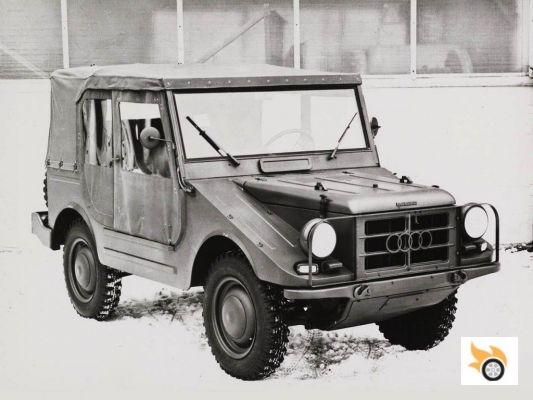 Faced with this worrying situation, the German government, which desperately needed a Jeep-type vehicle, decided to call a fast-track competition in 1976, to try to find a replacement for their military vehicles. And here comes the third protagonist on the scene, the DKW Munga.

When, in the mid-fifties, Volkswagen declined the offer to manufacture the Kübelwagen for the German army, considering it an unprofitable business, DKW entered the scene.

The Auto Union firm then presented a peculiar and different vehicle to anything seen until then in Germany. It was a vehicle with a longitudinal front engine, hanging in front of the front axle. It sent its torque through the four wheels with a central transfer case, being a permanent 4×4.

The propellant, as a good DKW, was two-stroke, with three cylinders in line, less than a liter of displacement and about 44 horsepower. 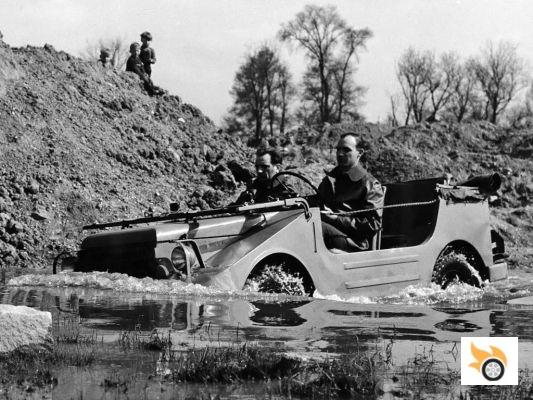 The Munga became an instant success in the eyes of the German army, which made it its fundamental light vehicle. Between 1956 and 1968 would be manufactured just over 45,000 units, with customers that would reach up to the UK army (which after acquiring it would withdraw it from service due to constant reliability problems, all said, something peculiar, because in Germany it was considered an extremely robust vehicle).


DKW was part, as you know, of Auto Union, at that time under the umbrella of Daimler (Mercedes-Benz). Volkswagen needed to increase its production capacity, and without much interest in the brands and their products, took control of Auto Union in 1965, with the idea of using the Ingolstadt factory.

Within the package acquired were the trade names, products and also the developments started what would eventually become the Audi 80 and the first Volkswagen Passat. But focusing on what concerns us, Volkswagen also kept the Munga. 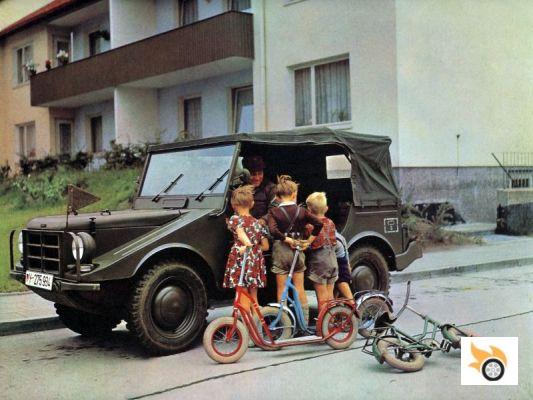 In three years, trying to put in order the activities of Auto Union, Volkswagen euthanized the Munga. But when in Wolfsburg they realized that the Type 181 was not suitable for the work of the German army, someone in the house came up with the idea that, having the Munga developed "in-house", they could take advantage of that platform to try to create an SUV tailored to what was being requested. 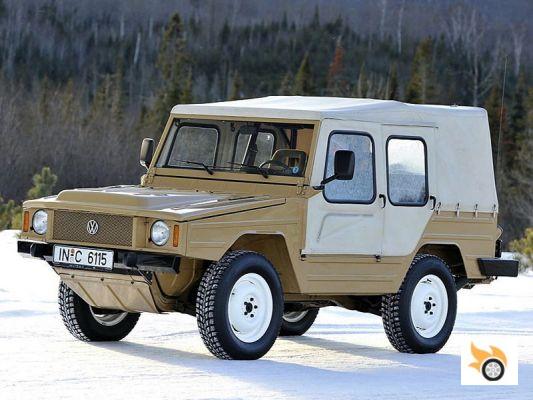 Thus was born the 183 project. VAG proposed to a small group of Audi engineers to create a new vehicle that takes advantage of the lessons learned in the Munga, taking much of its frame, but adding more modern components from the bench organs of the German company.

Thus, the three-cylinder two-stroke leaves its place to a four-cylinder block and 1.7-liter four-stroke "of all life" of Audi origin. The transmission is modified. Instead of being a permanent 4×4, it opts for a suitably modified Audi 100 gearbox sending torque to the rear axle. Using controls on the side of the steering wheel, the driver can engage the front axle, which rotates in solidarity with the rear (there is no room for a center differential). In addition, the front differential can also be locked, maximising traction in all conditions. 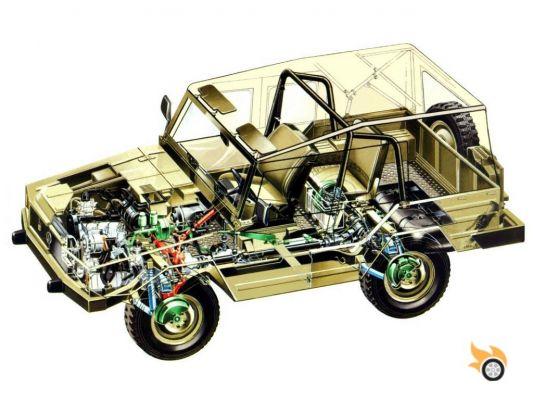 Elements of Volkswagen models such as the Golf, the Beetle, and the Audi 100 are taken to configure the final format of this vehicle that, with 75 horsepower, manages to win in the competition of the German army before the more expensive and complex Mercedes-Benz G-Class, thus achieving a productive order that would lead to the Ingolstadt factory to manufacture more than 8,000 units over ten years (between 78 and 88).

The curious thing about this whole story is the next twist of fate. With the car still in the development phase, and with the idea of launching a "civilian" version, the Iltis, which would be manufactured under the Volkswagen logo, is sent to Finland for winter testing that same 1978.

In these winter tests there are also several units in development of other Audi models that were to be launched soon.

A development engineer of the brand of the four rings, Jorg Bensinger, is stunned by the way the Iltis has to move through the snowy Finnish roads, while the rest of the cars of the brand for which he works within VAG suffer the inclement weather, barely able to move forward. The light bulb goes off in Bensinger's head: why not create a sedan with this kind of traction? 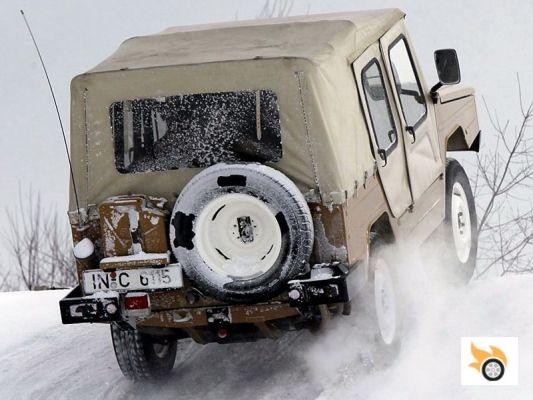 A few days later, Jorg returns to Ingolstadt and meets with Ferdinand Porsche's grandson, the great Ferdinand Piech (it's a small world), and explains his idea to him. It is curious to think that this all-wheel drive technology had been in DKW, which belongs to the same group as Audi, for years, but no one had thought of crossing the technique and pass it to "normal" sedans.

Piech quickly understands the opportunity, and gives the green light to begin development of a working Audi all-wheel drive prototype. He takes an Audi 80, installs the rear differential of an Iltis, and inserts the Audi 200 engine, with five cylinders and turbocharging. 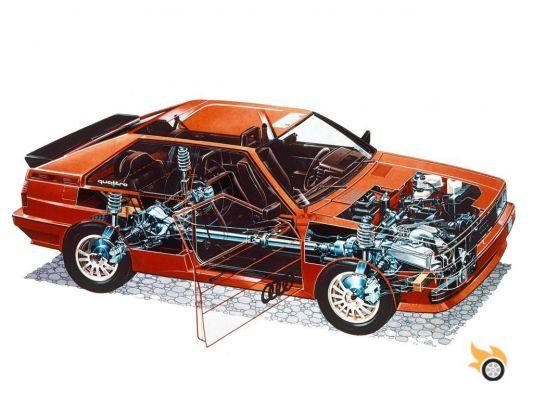 The results are so encouraging after a few tests between managers that the project gets the green light immediately. A date is set: Geneva Motor Show 1980. That's where Audi will show its Audi Quattro concept before putting it into mass production.

But the Audi engineers, led by the ever-competitive Piech, see that motor racing could be a good way to promote "the invention" once the technology is perfected. After the gigantic media success of the first Paris Dakar, won by an all-wheel-drive Range Rover in 1979, in January 1980 an official Audi team enters the race with three Volkswagen Iltis in order to reinforce the concepts and developments of their cars.

Two Iltis run with the standard 75-horsepower engine, while the remaining one runs with a five-cylinder engine taken from the Audi 200, which will serve as the basis for the production Audi quattro. The success is total, with a double of the official Audi Iltis, although the five-cylinder, driven by Roland Gumpert (yes, the sports car brand Gumpert), has a bad accident and finishes ninth.

For Piech's team, not only has the reliability of the all-wheel drive system become clear, but they also realise that they can really do "something big" in the World Rally Championship. So they start to put pressure on the FIA to change the regulations and let their all-wheel drive cars participate in the WRC.

In the meantime the Audi quattro is presented in Geneva 1980, going into production immediately after. The FIA decides to change the regulations. The other brands participating in the championship do not see an advantage or imminent risk in the all-wheel drive Audi, which will suffer a lot in the asphalt rallies to be competitive. The rest is already history. Quattro becomes synonymous with Audi technology. It wins world rally championships and consolidates as the flagship of the resurrection of a brand ostracized by Volkswagen, which is transformed on its own merits in a premium with this traction system that makes it "chic and different", something that many others will try to copy (Lancia, for example, but we'll talk about that another day). 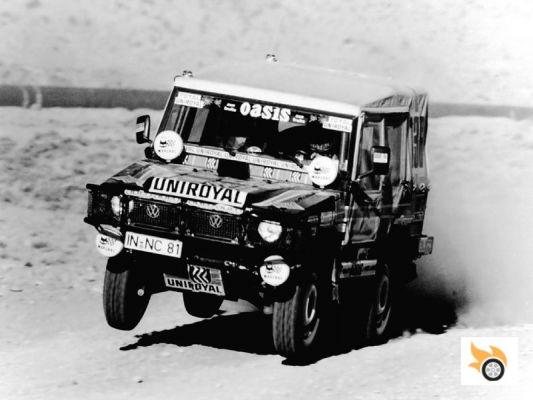 The Iltis dominating the Dakar in 1980

Volkswagen, which sees with astonishment and half a smile Audi's promotion, decides to bet a lot, a lot of money in converting the company in this technological vanguard, and well... now you know what happens: Audi is the second best-selling premium brand on the planet. Without the Iltis, without DKW and without the Porsche family, all this would not have been possible.

Article originally published in April 2014, retrieved for Pistonudos
Volkswagen has cheated with its Clean Diesel in the U.S., and it will cost it dearly ❯