Today is the anniversary of Fiat Nuova 500

The famous Cinquino had a grandfather who began to develop before the Second World War. It was in 1930 when Benito Mussolini asked Senator Giovanni Agnelli to design a car to motorize Italy, a car that should be economical and not exceed a price of 500,000 lire. It was an idea that carried an important propaganda load and Hitler was quick to copy, in turn asking Ferdinand Porsche to design a car that could be sold for a maximum of 1,000 Deutschmarks ...

Well, although Agnelli didn't think it was at all clear, he passed the job on to Fiat's technical department, which prepared two prototypes. The engineers' favourite was a very innovative one, with a monocoque body for four seats and front-wheel drive, and the other, one with traditional architecture - longitudinal front engine, rear-wheel drive - and only two seats; this prototype used concepts and components already tested by Fiat in the 508 "Balilla". 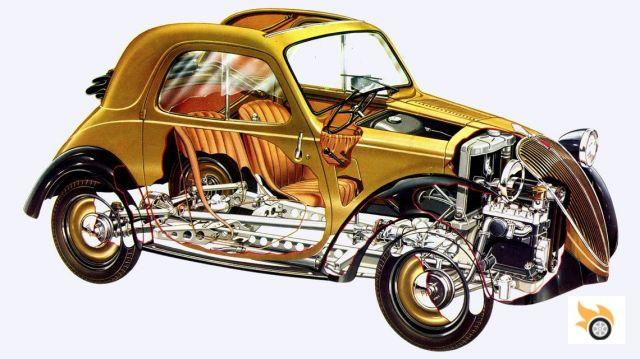 Unfortunately, the front-wheel drive prototype caught fire during one of the first tests in which it was shown to the top brass, so the technical team was forced to abandon their favourite idea in favour of the more conservative one, and so the 500 "Topolino" was born, a car which, although it was a considerable success, did not completely fulfil Mussolini's expectations of motorising Italy. To situate ourselves a little, we should mention that in 1936 Italy had only 222,000 cars for 42 million inhabitants - a proportion ten times lower than that of France. However, thanks to the economy of the car and its longevity - it was still in production after the war - almost 900,000 units of the famous Topolino were produced.

Once the war was over, Vittorio Valetta - the new director of Fiat - was entrusted with the design of Fiat's new mass-market vehicle. It was a complicated task, as Fiat had little technological background, and its facilities were badly damaged by bombing. Moreover, the design (architecture and technology) of the 500 Topolino - already outdated when it was born in 1930 - was completely obsolete in 1950. In this difficult context, Valetta entrusted Dante Giacosa - Technical Director - with the design of a new vehicle that - this time, yes - should motor Italy. 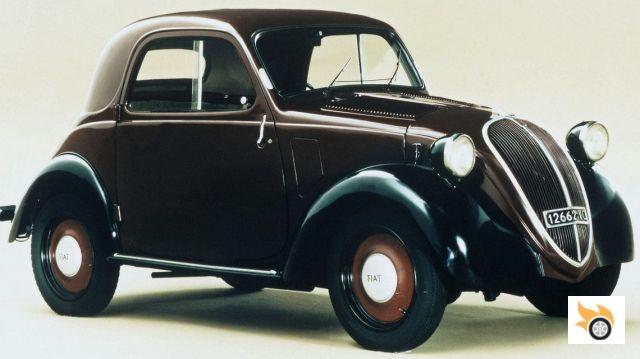 And the idea came from Hans Peter Bauhof, a German employee of Deutsche-Fiat. In 1953, the good Hans sent to Turin the designs of a small two-seater car inspired by the famous VW Beetle, but equipped with a two-cylinder, two-stroke engine. Compared to the Beetle, Bauhof's project defined a car with much smaller dimensions and only two seats - like its ancestor, the 500 Topolino - but retained the rear engine and propulsion architecture.

Giacosa examined the young Bauhof's project, and although due to the time needed for its development he had to rule out the development of a new two-stroke engine, he immediately saw the advantages of the architecture and technical scheme. They were perfect for containing production costs, as the rear engine and rear propulsion were much simpler -compared to the traditional front engine and rear propulsion scheme-, and the monocoque bodywork also reduced costs compared to the traditional architecture of independent chassis and bodywork.

And so the Fiat 600 was born -which we know very well in Spain-, a car with an architecture very similar to that of the VW Beetle and in which Giacosa had to mount the old-fashioned engine of the 500 Topolino. Thanks to its design, the Fiat 600 was very cheap to build, so it could be sold at a relatively low price, and in Italy it was an immediate sales success. 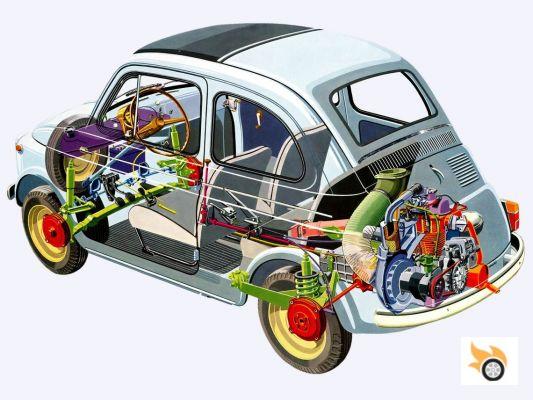 Italy was beginning to motorize and the chaotic Italian cities were becoming more and more congested, so Giacosa thought it was a good idea to take up Bauhof's idea of designing a car even smaller than the "big" Fiat 600, can you believe it? And so the Nuova 500 began to take shape. Several options were designed, and in the end, the engine chosen was a two-cylinder, air-cooled, 479 cc, in-line four-stroke, a small engine that delivered a modest 13 hp. One of its curiosities is that -to alleviate the vibrations inherent to its design-, the engine was mounted with springs anchored to a cross bar.

As far as styling is concerned, and although it seems that in such a small and functional car there is not much room for fantasy, I would say that the designers of the 500 were quite inspired. The main characteristic that identifies it are its two horizontal parallel ribs at the waist that visually stabilized the car, "tidying up" in an admirable way a complicated silhouette, lightening the cabin, and visually separating it from its brother, the Fiat 600. Interesting detail is its rear part, which makes a very slight hint of a third volume, and that perhaps intended to make a visual wink to its grandfather, the 500 Topolino.

The car was introduced in July 1957 as the Nuova 500 to relate it to the popular 500 Topolino, had a top speed of 85 km/h and was offered for an asking price of 490,000 lire, a relatively high price compared to the Fiat 600's 590,000 lire, which was clearly "more car". The concept of cost reduction and simplicity was taken to the extreme.

For example, the door windows were fixed and only the front triangular windows could be rotated - which at the time interfered with the driver's left hand -, the roof was always made of fabric, because they said it saved on expensive sheet steel, there were hardly any chrome trimmings... to top it off, journalists criticized the engine for its lack of power and elasticity... Certainly, the first months of the Nuova 500 were not exactly successful. 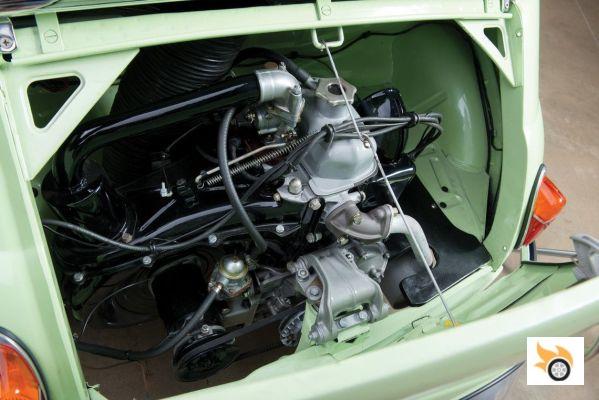 Fiat reacted quickly, and in November of the same year split the 500 range into two new versions: The economy 500, almost identical to the first series but with a price reduced to 465,000 Liras, an engine boosted to 15 hp -with which the top speed went to 90 km / h-, and some improvements in detail in the finish; and above, the 500 Standard, which -for the same 490,000 that cost the criticized launch model-, added chrome interior and exterior and some other detail more equipment.

The small changes had an effect and the friendly 500 began to be liked and gradually became a social phenomenon. It was not only bought by those who couldn't afford a more expensive car, but it started to sell very well among those who could afford more expensive cars, but saw in the 500 a friendly and casual car that could handle itself perfectly in urban traffic. Perhaps this is why the 500 is very probably the first "small and chic" car, and very probably the first true "city" car in history.

To relaunch its image as an aspirational and desirable car, Fiat launched the 500 Sport the following year, a "sporty" 500 that cost 560,000 lire, equipped with an engine with a displacement increased to 499.5 cc and various mechanical improvements with which the power went up to 21.5 hp and the top speed to over 105km/h. As if that wasn't enough, it came standard with some racing red side stripes, and equipped -for the first time in the model- the hardtop, the first GTI in history? probably?

Curiously, shortly after, a much less expensive version was offered - 495,000 lire - with a convertible canvas roof... The 500 Sport started to become famous and to race in competitions, obtaining important successes. This increased the public's interest in the small and cute Cinquino. Soon after came the spicy versions that Abarth developed on the 500, and that cemented the 500's aura.

The 500 Giardinera, and the 500 by external coachbuilders

In 1960 the 500 Giardinera was introduced, a more "family" version with a longer wheelbase and a much improved load capacity, and the Furgoncino, itself derived from the Giardinera and for commercial use. Both were quite successful and were manufactured until the disappearance of the model from which they were derived. On the other hand, the 500 was the starting point that many coachbuilders used for the most diverse transformations, I put photos of some of them.

A sales success -more than 5,200,000 Nuova 500 were sold-, and longevity -it was manufactured between 1957 and 1975-, the Cinquino received during its long life numerous improvements, both mechanical and equipment and bodywork, even being modified -with some curious headlights and bumpers- to comply with U.S. legislation and to be sold in the United States. Its successor was the Fiat 126, a car of similar architecture but very modernized in every way, and also reaped a remarkable success.

The current 500, and the Anniversario version

Inspired by the success of BMW's new Mini, Fiat announced in 2006 the current 500, a cute citizen with an aesthetic that replicates very successfully the old Nuova 500 (what a mess), but this time on a platform of engine and front-wheel drive taken from the Fiat Panda. It was presented in society on July 4, 2007 with a massive party with hundreds of motoring journalists.

It went on sale immediately and was a great sales success, a commercial success that has exceeded the expectations of the Italian brand. To put it in perspective, an annual production of almost 60,000 units was planned and it was sold in just three weeks. The success is no coincidence, because the new 500 offers a very reasonable habitability on a very moderate size, a customizable, attractive and chic image, and all this for an attractive price. Such has been the success of the new 500 that Fiat has had no qualms about squeezing its image - as BMW has done with the Mini - in the form of an attractive compact MPV and SUV. From one model, a complete range has emerged: 500 S, 500L, 500L Wagon, 500L Cross and 500X.

Are you into retro-chic? Well, you're in luck, because to celebrate the 60th anniversary of the Nuova 500, Fiat is celebrating with the launch of the "Anniversario" limited series, a version that is characterised by its customisation and colours - green and orange - that are unashamedly retro. If you're looking for a small (though not as small as its grandfather), relatively roomy, reasonably priced city car, and you're getting nostalgic reading this article, I'd consider it, it's a real cutie. 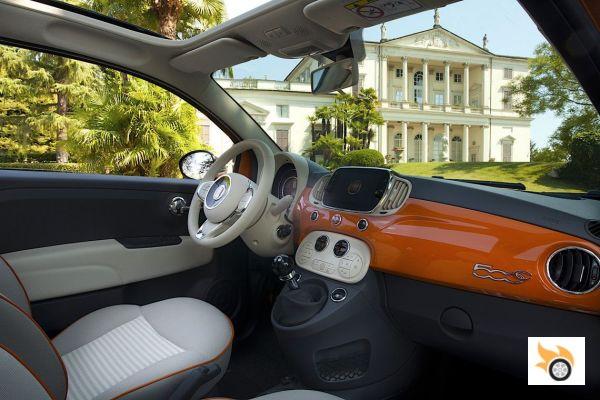 Fiat Ægea, the Italian compact sedan made in Turkey ❯