We have collected historical and recent press photos from the SEAT Museum.

Eleven years after the end of the Spanish Civil War - and five years after the end of the Second World War - the industry and the economy were only capable of manufacturing and selling a few small cars like the Biscuter. It seemed that in Spain we had neither the technological background, nor companies capable of designing and industrializing modern automobiles, a pity that there was not more confidence in our capacity, because - without going any further - Wifredo Ricart and Pegaso were capable of designing and building the exceptional Pegaso Z102 at the same time...

The autarkic Spain of the time was isolated from the rest of Europe and the rest of the world, both politically and commercially, and the pace of economic growth was much slower than that of most European countries. Just one fact: at that time, there were only 3.1 vehicles per 1,000 inhabitants in Spain.

In that context, and with the healthy intention of motorizing the country and boosting the industrial economy, the Spanish State founded SEAT (Sociedad Española de Automóviles de Turismo) in 1950, through the INI (National Institute of Industry). The State had a 51% stake in the company, 40% was bank capital, and Fiat had the remaining 9%. The state wanted SEAT to serve to boost the auxiliary industry, and among other clauses, demanded that 90% of the components were manufactured in Spain, a difficult requirement to meet, since at the time there was very little auxiliary industry.

In just three years the first car left the SEAT factory in Barcelona's Zona Franca, a 1400 manufactured under Fiat license, a high class car at that time, which very few in Spain could afford. The same year that SEAT presented its 1400, FASA-Renault did the same with the Renault 4/4, manufactured in Valladolid under license from Renault. The 4/4 was the Spanish version of the 4CV, a car that the French brand launched in the post-war period and which was clearly inspired by the Volkswagen Beetle, also with a rear engine but somewhat smaller, however it had four doors.


The 4/4 was a really interesting car in its time and was a success in France, but the "ex-factory" price (the expression of the time for "without taxes") of 76,400 pesetas was very high for the economic possibilities of the average Spaniard, so its production line was designed for a relatively modest production volume, which in its six years of production reached 26,298 units.

As you probably already know, in terms of design and mechanics, our SEAT 600 was basically a Fiat 600 manufactured under license from the Italian brand. The Fiat 600 was also the car that started the Italian motorization. Dante Giacosa designed it for that purpose and - as I explained a few days ago in the article about the Fiat 500 - the design was based on the idea of Hans Peter Bauhof, a German employee of Deutsche-Fiat.

The young Bauhof sent the designs to Giacosa for a small utility car with a similar architecture to the Beetle, and Giacosa immediately understood that this was the car they had to design and manufacture. The Fiat 600 was a great sales success in Italy, and together with the Fiat 500, were the cars that powered the transalpine country. No less than 2,695,197 Fiat 600s were sold in Italy, 923,487 in Yugoslavia, 304,016 in Argentina, 171,355 in Germany... and under the SEAT brand, also in Spain.

Convertible versions have existed since 1958

The success of the Fiat 600 in Italy inspired the people at SEAT, who -under the umbrella of INI-, were encouraged to start the adventure of manufacturing the SEAT 600, a car with the minimum habitability required and with a design that facilitated a reasonable economy of manufacture, which seemed the ideal model to motorize our country. And so work was done on the construction of a new production line for the SEAT 600, managing to put it on sale in June 1957 for 65,000 pesetas F.F., which became 71,400 after taxes.


The first unit manufactured was for a son of General Muñoz Grandes, who commanded the Blue Division in the Russian theatre in WWII. It was not registered until December, with plate M 184018 (Madrid), that car was deregistered in 1985. The first registration of the 600 was B 141141 (Barcelona), according to Museo SEAT. The original 1957 model - 600 N - had a 633 cc four-cylinder engine with 21.5 hp. With an average fuel consumption of 7 l/100 km it was capable of carrying people at a maximum of 95 km/h for 400 kilometres - let's bear in mind that at that time there were no motorways in Spain.

Applying year-on-year inflation, those 71,400 pesetas would be about 18,000 euros today, but if we take into account that the average annual salary at that time was around 8,000 pesetas gross, it is clear that in reality, the SEAT 600 was not within the reach of most Spaniards. By way of example, a school teacher - who earned around 16,000 pesetas gross per year - would have had to work for four or five years to afford a SEAT 600, whereas today, the average gross salary of a full-time teacher for a year should allow him or her to buy a SEAT Ibiza.

Despite this, the 600 quickly found a niche in the emerging middle class. The only option to the SEAT 600 was the Renault 4/4, and the number of requests for the 600 immediately exceeded the company's expectations. A few months after its launch, the order book for the SEAT 600 exceeded 100,000 units, and the company had to close the entry list. Just one year later - in 1958 - SEAT increased production fivefold. 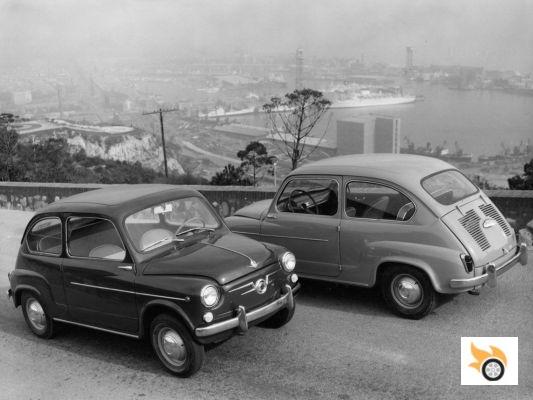 And with the increase in production came an increase in the workforce, which awakened the "conscience of the working class" and encouraged cells critical of the political regime to enter SEAT. Gradually, complaints about hygiene, food and working conditions began to follow one after another, until 1958, when the first strike at SEAT took place - a strike in solidarity with the 15,000 striking Asturian miners, which stopped the miners' shafts for three weeks - and which ended with the immediate dismissal of the SEAT strikers.

To guarantee social peace, working conditions improved, salaries went up, so that the average salary of a SEAT worker doubled the per capita income of the time, all at the same time as production of the 600 increased at an unstoppable rate. The waiting list for a 600 was long, as demand outstripped supply, and on the other hand, there was strong tariff protection against importing foreign cars.

To get on the waiting list, you had to prove your solvency and pay 20,000 pesetas in advance.

In addition, it was not very easy for other manufacturers to set up in Spain... The truth is that the 600 had few competitors in its early years, as in addition to the Renault 4/4 -more expensive and with a limited production volume-, there was only the Citröen 2CV -which appeared in 1959-, a car that was never really competition for the 600, as it was more focused on the rural environment.

The 600 meant a dream for many families, and for those who could afford it, the ability to start enjoying their free time in a different way. On weekends it took us on excursions -to the countryside, to the river, to the mountains...-, it allowed us to visit our family in the village and at the same time "show off our car". With the 600 also began an incipient interior tourism, and it was the car used by the "Rodriguez" workers to go on weekends to the beach or to the mountains, where their summering family was waiting for them.

In 1963 the SEAT 600 D first series arrived, with 767 cc and 25 HP of power, which already allowed it to reach 108 km/h while maintaining consumption. Not only did it increase 4 hp, but also the maximum torque from 39.2 to 51 Nm. It can be distinguished by the position and flashing lights under the headlights, the ignition key in the center of the dashboard and the new light box by levers.

The second series of the 600 D, appeared in 1966, kept the power but had aesthetic changes. The bumpers received rubber bumpers, the hubcaps became smooth, the wheels were black and the headlight bezels received a visor. Inside the seats grew in size. So far the opening of the doors was "suicidal", in the opposite direction to the usual.

Little by little, the 600 became established in our country, and SEAT - in collaboration with external coachbuilders - took advantage of it to launch special bodyworks, such as the commercial version and above all, the curious 800, a long 600 with four doors that was designed and manufactured at Carrocerías Costa in Terrassa - a car that is becoming increasingly sought after, and of which there is no Fiat equivalent.

But times were changing, and families began to want bigger cars... The price of raw materials began to fall, and little by little, making bigger cars stopped being much more expensive. In 1964 the Renault 4 went on sale, and in 1965 the Simca 1000 and Renault 8 went on sale in Spain.

A year later, SEAT launched the 850, a car which, although smaller than its French rivals, was much more capable than the 600, and shortly afterwards the first "affordable family car" appeared: the four-door 850, also designed by Carrocerías Costa, which manufactured the bodywork "en blanco" (finished bodywork, without mechanics or other components).

In 1969 the SEAT 600 E appeared, with conventional door opening, a central trim with a single horizontal line - the "moustache" and the eagle disappeared - and changes in the light clusters. Mechanically it remained as the 600 D and was produced until the end. In the last stages of its life, the 600 L Special appeared, with a 32.5 hp engine that allowed it to reach 120 km/h, and a more luxurious interior.

The Italian sibling of the SEAT 600 ceased production in 1969, when it ran out of market, as Fiat's range was perfectly staggered at the bottom with the 500 and 850. But SEAT never believed in the 500, nor in its replacement, the 126 - perhaps too small for our market - and continued to produce the SEAT 600 as an entry-level car until 1973.

The current equivalent of the 600 is the SEAT Mii, which is made outside Spain and doesn't have the popularity of the Ibiza.

A classic by right: "you were born a prince and die a king".

Nowadays and little by little, the SEAT 600 is becoming a symbol and a very appreciated classic in our country, and there are many of us who once travelled or drove one. Besides, it has a nice and pleasant design, and although we didn't really invent it -Spain is not a country for inventors-, we love it very much, after all, it started the mobility in our country, it even has a monument in Fuengirola!