The Renault 16 celebrates its 50th birthday

It all began in 1955, when Pierre Dreyfus took over the reins of the state-owned company Régie Renault. He succeeded Pierre Lefaucheux, who died in a car accident. Dreyfus is not an engineer, he is a lawyer and brings with him a new vision of the company. Dreyfus wants Renault to focus more on the human aspect, i.e. the end user of the car, and less on technology. At the same time, he renewed many of the teams with new, young and creative people coming from different sectors, such as Yves Georges, the new head of the Research department and the future father of the Renault 4 in 1961.

In 1958, Dreyfus was aware of the failure of the Renault Frégate, the top-of-the-range model, and needed a new model capable of consolidating Renault's position in the United States. To this end, he launched the study of a new model, the 114 project, for the North American market.

The brief was quite simple: a top-of-the-range car, with 6 windows and designed for the US public, where sales of the Dauphine were starting to slow down. Logically, with these objectives in mind, the Research department presented a very classic car: 3-body, in-line 6-cylinder engine and rear-wheel drive. In the end, the project did not convince him and Dreyfus cancelled it in 1961. Even so, he did not give up on Renault having a top-of-the-range car and asked his engineers and designers to imagine the car they would like to have. For once they were given creative freedom, they immediately set to work. Dreyfus thus aims to propose something radically different and original.

The success of the launch of the Renault 4 inspired the engineers to imagine something similar, but with a more exclusive and less industrial or rural look. Project 115 was launched. And it was with this new project that the arrival of Yves Georges as head of Research (later R&D) at Renault clearly proved to be a turning point for the brand. Renault would thus go from making "all rear-wheel drive" cars, such as the 4CV, the Dauphine, the Frégate or the Renault 8 and 10, to front-engined, front-wheel drive cars.


The only major problem that Dreyfus sees with the 115 project is that they don't have time. They have lost a lot of time with the 114 and he tells him to make up for it, however he can. Yves Georges, a creative man, decides to recover as much as possible from project 114. For example, the 6-cylinder engine loses 2 cylinders and becomes the new 4-cylinder aluminium engine of project 115. Seeing the time they have gained with this, the 115 project needed only 4 years of development, when the minimum then was 6 years, the whole industry did not take long to merge their departments, like Renault, to create the R&D departments.

The Renault 16 made its debut at the 1965 Geneva Motor Show and was a minor revolution. The public was presented with a car with a longitudinal front mid-engine and front-wheel drive. The body was a two-volume, five-door car (at the time, the boot lid was known as the service door). On board, everything is designed to seduce the rural, city and suburban clientele (at that time it had no pejorative connotation, with time and the new economy everything changed). 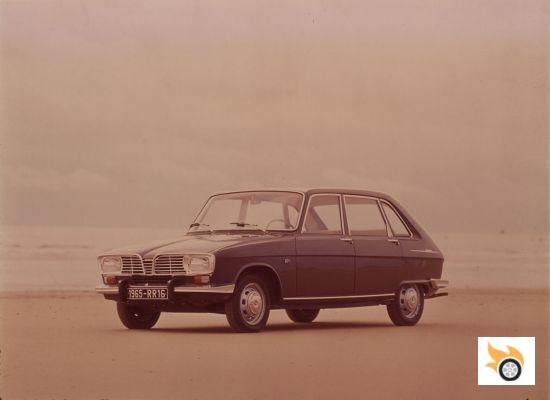 There is even talk of modularity for the first time, as there are up to 6 possible interior configurations. Some of them seem to have been discovered by the new compact SUVs, such as the adjustable rear seats to increase the boot volume, when it is something that first appeared with the Renault 16 (in fact, in the R16, the boot is now 403 litres). Other Renault 16 configurations must be put in the context of the era, such as number 4 and 5. The 4 transforms the rear seat, joining the front right, in a cradle for the baby, while the 5, allows by raising the back of the rear seat and tilting the front right to make a "chaise longue". It turns out that much of the modularity of the MPVs was devised for Renault's flagship in 1965... 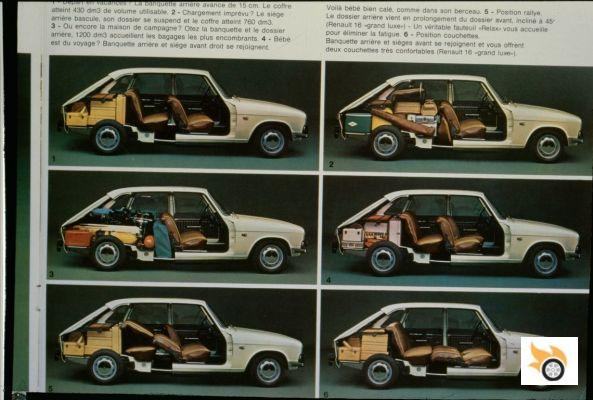 The quirky exterior design is the work of Gaston Juchet. For many years it was attributed to Philippe Charbonneaux, but his work was as a consultant. Although it is true that greatly influenced the design of the rear, as the designers racked their brains to get the gate was something integral to the design and thus remove the van aspect that both feared. This was achieved with a tailgate that lowers beyond the side windows (to the waistline), with a sunken rear window, creating a mini third volume, and with the side panels forming a sort of aerodynamic drifts. Even so, in the eyes of Renault management the car still has 6 side windows, symbol for them of a luxury car (the R4 also had them, but no one told them). 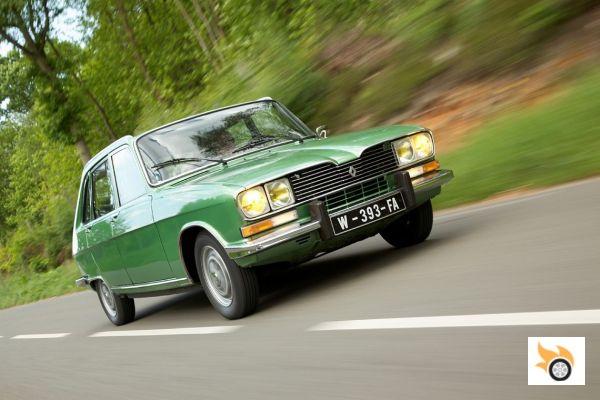 Initially available with a 1,470 cc 55 bhp, in 1968 a 1,565 cc 83 bhp was added to the range, accompanied by a new dashboard. In 1969, the version with automatic transmission arrived. Associated with the 1,565 cc engine, it loses a little power in the operation to reach 67 hp. That same year, the equipment is completed with reversing lights, electric front windows, electric sunroof and leather upholstery. All this to emphasize that in 1966, the Renault 16 was voted Car of the Year in Europe, ahead of the Rolls-Royce Silver Shadow and the Oldsmobile Toronado. 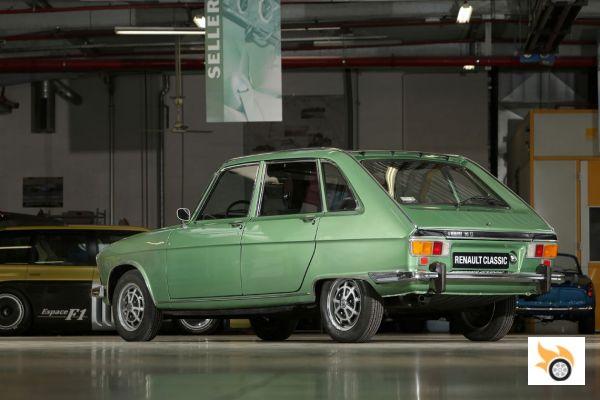 The Renault 16 remained in production for a long time, retiring from active service in 1980, with 1,851,502 units produced. Before that, in 1973 it received its last update, a 1,647 cc 93 hp engine with a 5-speed manual gearbox and thus formed the new TX finish (the green model in the photos). It reached 175 km/h and its equipment included central locking and inertial safety belts.

It's not the most remembered Renault, nor the most emblematic and it certainly won't make your head spin when you see one, but it's curious how 50 years ago, this top-of-the-range Gallic car was innovative in many aspects (modularity, R&D). It will never reach extraordinary values in the classic market, but to get started with a popular car with a relevant historical value, it's not bad at all.

add a comment of The Renault 16 celebrates its 50th birthday