After the 2008 and 3008, the 5008 is the third new crossover from Peugeot in the European market. In the official statement Peugeot comes to say that gives the market what it is asking. It has five spacious seats and another two for children and occasional hardship. Although Peugeot calls it "compact", compact nothing, are 4.64 meters long. It is 110 mm longer than the outgoing generation 5008.

Its design features are consistent with the 2008 and 3008: vertical front, elongated hoods, specific visual signature (can have 100% LED headlights), chrome grille, black roof, black band under the rear window, prominent wheel arches, many black protections at the bottom, and chrome everywhere. Whether you like the design or not is up to you. 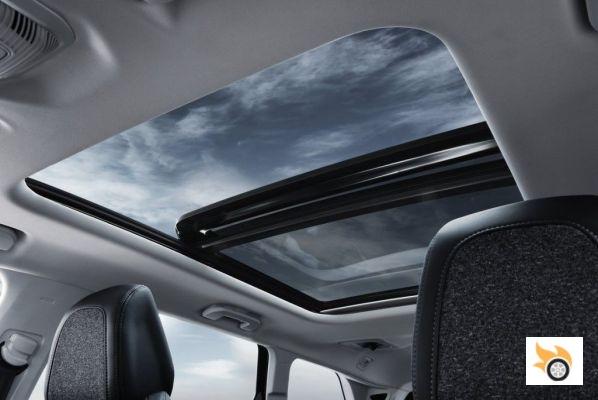 One of the justifications for the SUV-like body is the interior space. In the front seats there is 916 mm for the head and 816 mm for the legs, while in the second row these dimensions are 889 and 899 mm. Well, if they are worse than those of the Hyundai i30 that has just been presented, and it is a smaller car! In terms of width, the 5008 is better, so for starters the central rear seat is the same width as the others, and has independent adjustment in length and backrest.

The third row seats, as you might expect, are not very wide: 820 mm for the head and 770 mm for the legs. Access is through the second row, with a handle that allows the folding on themselves in a single movement. All the seats in the second and third rows can form a completely flat load floor. According to VDA standard, the maximum possible volume is 1,862 dm³, with the third row seats removed from the car, and up to the roof.


It is 100 cubic metres larger than the 5008 MPV, and the boot lid can be opened with a flick of the foot (under the bumper).

Peugeot doesn't say how much boot is available when using all seven seats, but when using five, it's 702-780 dm³ of capacity, depending on whether it's pure five-seater or if the third row is folded down. Those volumes are counted up to the top of the second-row bench seat, which is the norm. By folding down the front passenger seat, an object of up to 3.2 metres can be carried. 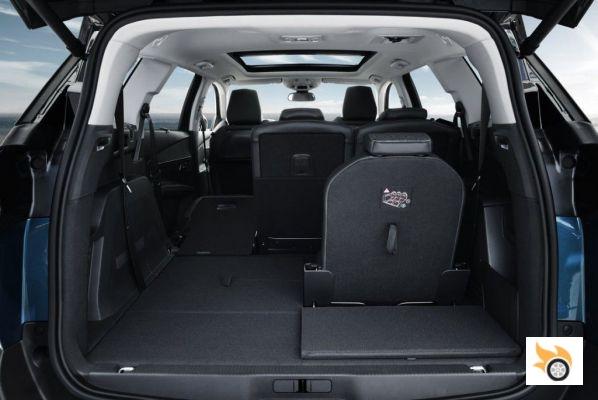 Inside the boot there are specific spaces for an electric scooter, the e-Kick, and a pedal-assist bicycle, e-Bike. This solution already exists in the 3008, and has the advantage that when they are placed in their predetermined slots, they are being recharged with the energy generated by the car's alternator. Peugeot's idea is to complete the journey on wheels, even if it is an old town shielded from traffic.

Let's move on to the interior. Like the 3008, it features the second-generation i-Cockpit, with raised digital instrumentation, capacitive touchscreen, a very small steering wheel and multi-sensory stimulation. Peugeot talks a lot about the driving experience in terms other than the usual ones, or the ones we have in our heads.

On a visual level the instrumentation, with colours and animations, stimulates the sight. The sense of hearing will be served by an audio installation signed by Focal. The sense of smell will be stimulated by three fragrances developed with Scentys and Antoine Lie. The latter is not new, PSA has already incorporated fragrance diffusers in previous models. Finally, the touch is pampered with massage seats and the feel of the different materials. 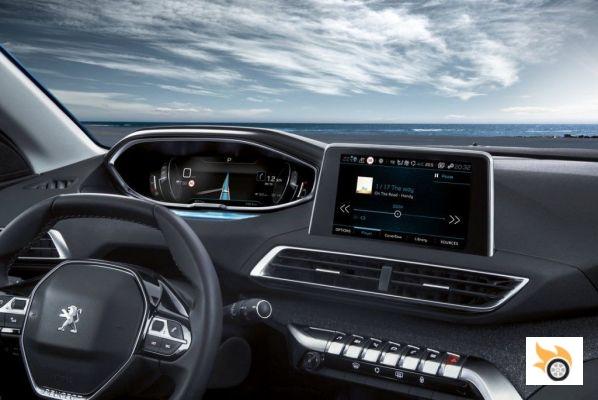 You might think that all these elements are there to isolate the driver from what he's driving, and transport him to an idyllic world where he and his SUV are the masters of the neighbourhood. That's partly true, but Peugeot boasts an exhilarating driving dynamic, on a par with what it usually offers. Honestly, I don't understand what's so exhilarating about driving a heavy compact, with high suspension, three-cylinder engines (petrol under 150bhp), a torsion beam rear axle and front-wheel drive.

By modifying a few preferences, the driver can make the car more in tune with their mood, via the "Boost" and "Relax" states. It will change the feel of the steering, the throttle response, the automatic gearbox will lengthen the changes, the sound of the engine will be amplified (through speakers) and the instrumentation will give interesting data: power, turbo pressure, accelerometers, etc..

Other equipment to consider are the panoramic sunroof, panoramic vision cameras (like those of Nissan), parking assistant with automatic steering, wireless charging of mobile phones (Qi), advanced connectivity with Android Auto, Apple CarPlay or MirrorLink, 3D navigation with updated data via TomTom, etc.. 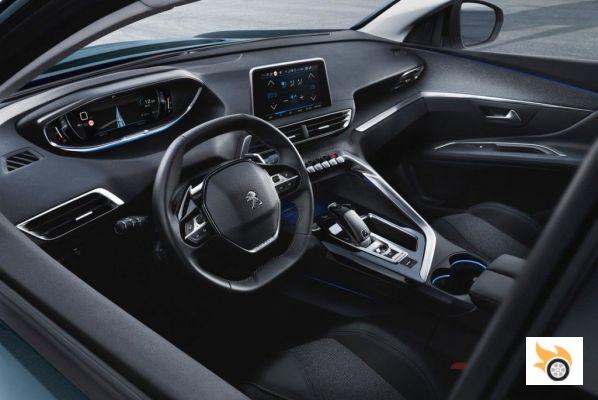 The hearts of the lion


The most powerful engine is exclusive to the "GT" versions, as a middle ground are the "GT Line", which have a different aesthetic, and below the Allure and Active, which are the heart of range. As the new 5008 range starts selling in spring 2017, the equipment/engine levels and prices are not yet detailed.

We do know the homologated consumptions of the engines, but we are not going to put them for a simple reason: they are still unrealistic homologations. As PSA has decided to provide fuel consumption data for its cars in real-world conditions, we prefer to wait for them to be published, so as not to mislead our readers. Any resemblance between a modern NEDC homologation and reality is purely coincidental. 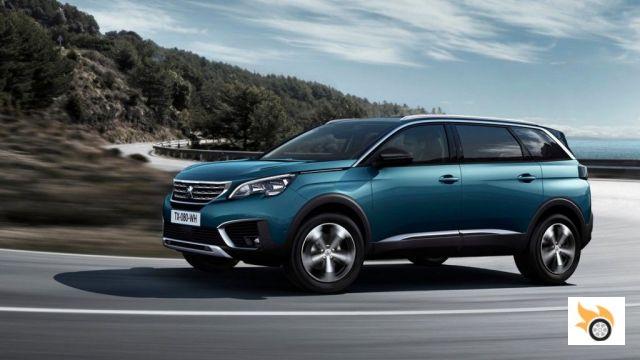 Let's talk about performance. The 130 hp three-cylinder petrol engines are not capable of accelerating to 100 km/h in less than 10 seconds nor of reaching 190 km/h, only the 155 hp turbo engine can do that. Is it too heavy? According to the technical specifications, unladen and with full tanks, it doesn't reach 1.4 tonnes. The 100 bhp 1.6 BlueHDi has performance on a par with a 70 bhp hatchback, and the 120 bhp engine doesn't reach 100 km/h in less than 11 seconds.

The 2.0 BlueHDi offers more decent performance, with 150 hp and 180 hp it takes less than 10 seconds to reach 100 km/h, and can almost complete the kilometre from a standstill in 31 seconds. In both cases they exceed 200 km/h, and it's not that we're making an apology for speed, but to establish a technical scale. By the way, some of its state-of-the-art driving aids don't work at certain speeds.

The active cruise control won't go over 140 km/h if it detects vehicles in your direction, nor can it be set to over 180 km/h. It will not warn of vehicles in the blind spot above 140 km/h. The Lane Keeping Assist will not steer at speeds above 140 km/h. Why not provide these aids up to the maximum speed the engines allow? We'll ask a responsible person when they make the dynamic presentation.

In other words, the assists work best up to 140 km/h, which is still a good jog. 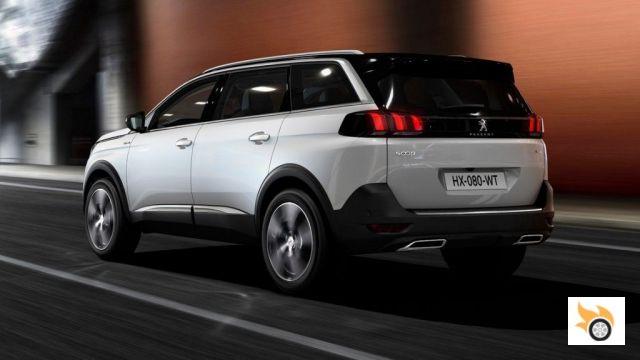 It's not exactly lacking in driving aids. It has automatic emergency braking (detects registered vehicles and pedestrians), warning of unintentional lane departure (with limited steering correction), warns when you've been driving for two hours without stopping or when driving becomes clumsy, recognizes traffic signs (and allows you to program the cruise control with them), and turns on the high beams when there is no one to dazzle.

For off-road driving it has the option of "intelligent" traction control, which manages the front axle in an optimized way, depending on what the driver wants. This option is linked to the 18-inch M+S tyres and includes the Hill Descent Assist (HADC). The front angle of attack is discreet, 19 degrees, and the rear is 28 degrees. The ground clearance is 236 mm. It can handle more than dirt tracks without stones or puddles with dignity.

In short, Peugeot is responding to market demands. In recent years Peugeot had not understood the SUV phenomenon, like Citroën, and resorted to the wild card of remarking Mitsubishi models (Outlander and ASX) that have not had the commercial success of the original. This time they will surely hit the nail on the head, regardless of whether these avant-garde designs can be liked or not, or be completely outdated within five years. We'll see...